On KJZZ's SOAPBOX, The Show turns over the the mic to listeners. For the fall 2022, writers tackled the theme SORRY. 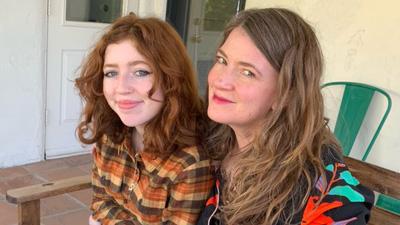 It’s early August in New York City. The weather is hot and sticky. I’m here with Liam, my husband, and our 18-year-old daughter, Emerson. We’re on our way to drop her off at a small liberal arts college 90 miles to the north. The New York City portion of our trip will be quick — less than 24 hours.

The three of us used to live here. It’s where we became a family. The August I was pregnant with Emerson happened to be the summer of a widespread power outage still known as the biggest in North American history — the Northeast Blackout. Liam, afraid my internal temperature would rise too much, prepared two large bowls of cold water for me to stick my feet in while sitting in our fifth-floor apartment. It worked to cool my whole body down.

Walking around New York now, 18 summers later, I keep looking up at the tall buildings and remembering something I used to think about when I lived here. Looking up, from so many of the high-rise apartments above you can see the rectangular protrusions of air-conditioning units sticking out. Some stuck in a window with a flimsy metal bracket or two holding the unit in place. There may be a towel stuffed along the side filing in a gap, or a hastily built platform of scrap wood. But sometimes there’s nothing at all. As if the only thing holding the air conditioner in place is the window closed down on top of it.

I used to think — how do these shoddily installed units stay in their intended places? What kind of supernatural influence keeps them from falling to the ground below and smashing unsuspecting pedestrians? I’m not a religious person but this must be a sign. How much of the world’s allotted good luck is being used up by this wonder? Taking the energy of an untold number of guardian angels.

When Emerson was just shy of 5 years old we moved to Arizona and she spent the rest of her childhood in Phoenix with its saguaros and monsoons and summers of triple-digit heat, and central air.

People keep asking me how I’m feeling about her leaving Arizona? About her going to school so far away? What they mean — without actually saying it — is: Won’t you be sorry she’s so far away. Won’t I be sorry that I let this happen.

We take the train upstate and rent a car. New York’s woods are wild and unruly. We move our daughter into her dorm room.

When it’s time to say goodbye we drive to a nearby orchard. It is green, the sun is shining, and the Hudson River flows nearby. I hug my daughter as hard as I can while tears well up in my eyes. I’m so proud of her. I want her to be uncontained and free. I want her to be self-directed. I will miss her tremendously and I am not sorry. I hope the air conditioning guardian angels will look after her. And me.

Sativa Peterson is a senior producer for KJZZ's The Show and lives in Phoenix.