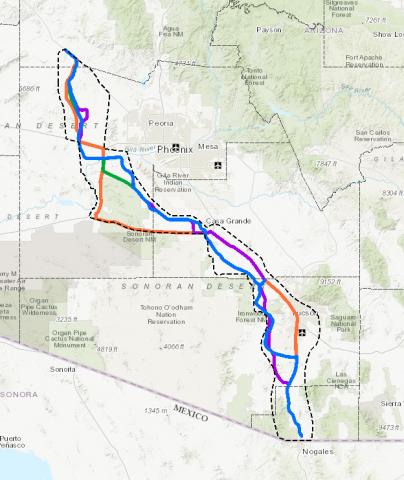 Arizona Department of Transportation
The proposed routes for Interstate 11, an interstate highway that would link Nogales to Wickenburg, and eventually Las Vegas.

Federal and state officials are asking a judge to toss a lawsuit seeking to stop development of the propose 280-mile Interstate 11 project from Nogales to Wickenburg.

State Transportation Director John Halikowski is telling U.S. District Court Judge John Hinderaker that without an alternative to Interstate 10 traffic will become so congested by 2035 that it will interfere with the ability of the region to function.

"Further, the success of the state economic development interests will depend on continuing transportation investments, like I-11, to maintain competitiveness,'' he said in a statement filed with the court. "Worsened congestion and poor travel time reliability on the interstate freeway system would adversely affect economic competitiveness.''

But attorneys for the Federal Highway Administration are taking a much more basic approach in their effort to quash the lawsuit filed earlier this year by the Coalition for Sonoran Desert Protection, the Center for Biological Diversity, the Friends of Ironwood Forest and the Audubon Society.

They are telling Hinderaker the whole case is premature. At this point, they said, no decisions have been made what route to choose through Pima County — or even whether the project will ever go forward, calling I-11 "a largely unfunded freeway construction project.''

"Should funding become available, identification of a precise alignment, design, and additional environmental review of the proposed facility will occur in a second phase,'' the federal lawyers argued.

"Moreover, there is no specific timing for the Tier 2 process,'' they said. "And the state legislature only recently authorized $25 million in funding for further Tier 2 study in Maricopa County, which does not include funding for final design, right-of-way acquisition, or construction.''

But Wendy Park, representing the challengers, said that misrepresents the situation.

"The Record of Decision committed FHWA to development of the I-11 corridor over the 'no build' alternative, selected the vast majority of its route, and narrowed the potential routes through Pima County to either the 'West' or 'East Option','' she said in her legal filings. And all that, Park said, has occurred without the federal agency properly completing legally necessary evaluations of impacts on public lands.

At the heart of the legal fight is the National Environmental Policy Act. It requires federal officials to prepare an environmental impact statement considering the effects of each major project, and includes considering alternatives.

Park said the route around Tucson would put the road through and near sensitive areas including Saguaro National Park, Ironwood Forest National Monument and Tohono O’odham Nation lands.

By contrast, she said, co-locating I-11 with the I-10 and I-19 "would not create the massive impacts to wildlife that the West Option would.'' Park said, though, there would need to be new and upgraded wildlife crossings.

It isn't just the options in Southern Arizona that are at issue.

Park said a stretch between Casa Grande and Buckeye also would affect recreation areas as well as habitats for various endangered species. And she said there also would be environmental effects from the final stretch from Buckeye to Wickenburg.

Halikowski, however, has a different focus.

"Population and employment growth is a key issue driving the need for the I-11 corridor,'' he said.

Halikowski said population within the Maricopa County portion of he study area is expected to increase by 284% between 2015 and 2025, with a 320% increase in employment.

"During that same time period, similar high growth rates are forecasted for employment within the Pinal County portion of the study area,'' he continued.

It's not just about jobs, he said, saying there are many tourist destinations within the corridor, including parks, outdoor recreation areas and cultural destinations.

"The interstate freeway system plays a critical role in providing access to these attractions and supporting tourism, which is one of the most important industries driving Arizona's economy,'' Halikowski said.

The transportation director said environmental issues have been considered, saying his agency spent about $17 million on such studies which determined the location of the corridor. But he said that's not the end of it.

"Several additional steps are required for I-11 to advance to detailed engineering and construction, including additional environmental studies of potential alignments of I-11 within segments of the I-11 corridor,'' Halikowski said.

That corridor includes two options in Pima County, one essentially co-locating the road with I-19 and I-10, and the other an entirely new highway going around the San Xavier reservation and the Saguaro National Monument through Avra Valley into Pinal County. And Halikowski said ADOT will prepare a "Tier 2 Environmental Impact Statement'' to evaluate specific alignments.

Park, however, said the project should not have even gotten to this point.

She said federal highway officials determined that certain public lands, including the Sonoran Desert and Ironwood Forest national monuments, Saguaro National Park and Tucson Mountain Park are not public parks, recreation areas or wildlife refuges of "national, state or local significance'' that fell within the scope of what environmental laws require to be considered.

The project, which eventually would run through Kingman and into Nevada, has generated concerns beyond the environmental issues.

State Rep. Mark Finchem (R-Oro Valley) raised questions as far back as 2019 about the wisdom of constructing hundreds of miles of new freeway when the state can’t take care of the roads it already has. He said there are far better alternatives for moving freight from Mexico to Canada, especially rail.

And the Sahuarita Town Council voted last year to oppose what has been called the "West option'' that would build a new road from that community, around Tucson, to Marana.

But the project, which could cost anywhere from $3.1 billion to $7.3 billion, depending on the final path, is supported by local officials in Casa Grande and Maricopa who see it as aiding economic development.

It also has the backing of Gov. Doug Ducey, who told Capitol Media Services years ago that the highway would "really benefit our state and allow us to be the player that we’re going to be in terms of economic growth and development and trade.''