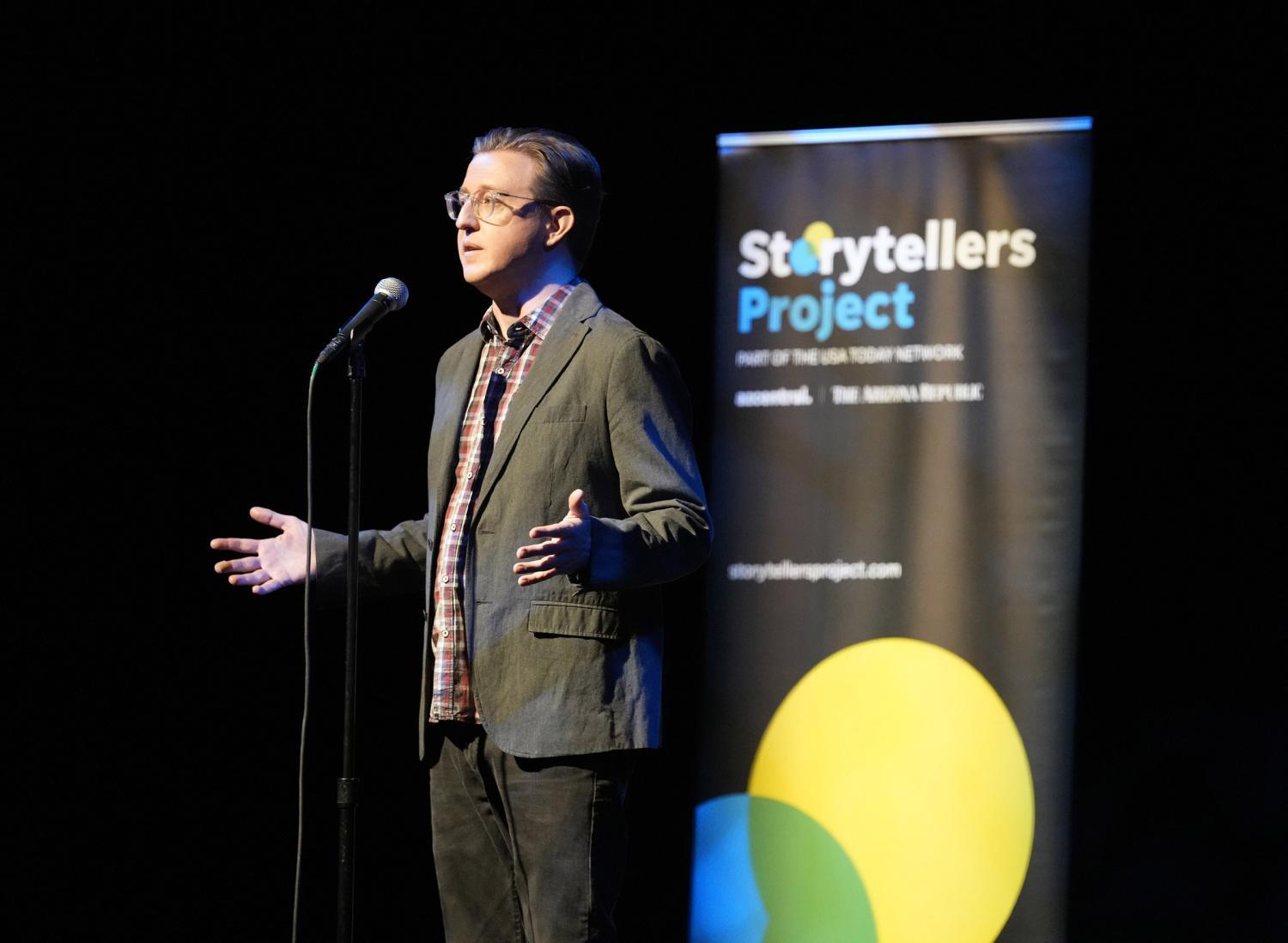 KJZZ partners with the Arizona Republic to bring you the Arizona Storytellers series. We record the live events and share them with you on the radio. Storytellers share stories about our community or the life events that have shaped them. Jimmy Jenkins grew up in a small town in Indiana. He says he lived a blessed life in a neighborhood where everybody knew everybody. His house was directly across the street from farmland and a forest. But across the highway was a maximum security federal prison. In order to get into town, Jimmy's family had to drive past the prison each day. The prison scared him and he often had nightmares about it as a child.

I'm about 9 or 10 years old sitting in the living room watching cartoons and I look out the picture window and the windows started to shake a little bit and then they started to rattle.

I thought, like, “Maybe this is a storm or tornado or something coming,” And to my horror and shock I look up and I see a police helicopter descending rapidly from the sky and land in the field across the street from my house.

“Oh my God,” I think. “This is it. This is literally like my worst nightmare has happening—there must have been a prison break. They're here, they're in the neighborhood, they're coming for us. This must be the SWAT team that's coming!” And I'm just paralyzing fear in front of the cartoons.

My mother immediately slams the door, draws the curtains and takes me into their bedroom and we shut the door in there. We hear at the door a knock.

The door opens and I hear the voice of my father. My father, who was the county sheriff. My father, who was on a drug reconnaissance flight with the state police. And he thought it would be cool to have the boys set the helicopter down in the field across from the house and surprise me and Mom for lunch.

I was on edge for days and I think my mom was fairly peeved and my dad of course that was funny and in retrospect it was.

But at the time you can see how it reinforced the trauma I had associated with the prison. I grew up riding around in a cop car. I grew up visiting the county jail. I found it to be scary and intimidating. I remember putting my little hands on the cold bars and just thinking, like, “My God, who ends up here?”

And my dad taught me empathy for the people in the jail. He told me that many of the folks who ended up there had an addiction that they're suffering from, a mental illness that they weren't getting proper treatment for. So he taught me to have compassion for these folks.

My senior year in high school they let you take one of those tests to try to figure out what maybe you're going go do with your life and mine came back saying you should pursue —think about pursuing a career in law enforcement. So clearly had — my father, again, big impact on me and my life. So I do I go to school and I study criminology and criminal justice.

While I'm doing that my sweet little hometown is going through some serious negative changes. People discovered how to easily and cheaply manufacture methamphetamine and the availability of this drug ravaged my community.

As I entered my early twenties I started to know people who developed drug addictions and I watched as they lost their jobs and their families and their freedom and they ended up going to jail and prison. This is all taking place while I'm studying the criminal justice system so while I'm doing ride-alongs with the county Sheriff's Office we're pulling up on the scene where someone I went to high school. with is getting arrested for running a meth lab. By the time I was done with my criminology criminal justice degree I realized I didn't really know anything about the system at all.

It was through reporting and through countless investigations I've done on other currently and formerly incarcerated people that I think I finally figured out what I was afraid of in the first place. I wasn't afraid of the people in the jails and prisons. I was afraid at how close I am to becoming one of them.

We are all I have realized one DUI, one poor choice, one pain pill prescription away from incarceration. And so now that I am a part of the media, which I feel instilled these negative stereotypes and thought processes in me as a young person, I try to use my platform to push back on those ideas.