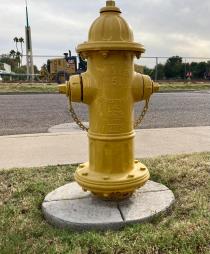 Christina Estes/KJZZ
As of September 2001, Phoenix had 709 non-working fire hydrants across the city.

Last December, Phoenix had more than a thousand fire hydrants that needed to be replaced. City staff couldn’t handle the backlog, on top of repairs and preventative maintenance they handle, so the city council hired a private contractor.

Phoenix said its primary vendor, Mueller Water Products, is limiting shipments to 90 hydrants per month, citing manufacturing and supply chain issues. The city has been working with its other fire hydrant vendor, Ferguson, and expects to get a shipment this month.

Repairs are also piling up because parts have been out of stock. The city said orders have been processed and deliveries can take up to 16 weeks.

When the council approved hiring a contractor to address the backlog of non-working hydrants, the plan was for city employees to handle future replacements, along with the backlog of repairs and conduct preventative maintenance.

As of May 31, city crews had a backlog of 83 hydrant replacements and 1,993 repairs. The data are based on nine of 13 positions assigned to the work being filled.