The United States Supreme Court has overturned Roe V. Wade, setting the stage for some states to enact restrictions on access to abortion.

The ruling released Friday morning states: “The Constitution does not confer a right to abortion … The authority to regulate abortion is returned to the people and their elected representatives.”

Earlier this year, Arizona Gov. Doug Ducey signed bill into law that bans most abortions after 15 weeks. That will take effect in September. However, there is a state law that predates the Roe v. Wade decision that bans all abortions, except to save the mother’s life. While Ducey contends the new law takes precedent, Republican Sen. Nancy Barto, who wrote the legislation, says it does not repeal any other state law regulating or restricting abortion.

There is a voter initiative to put a measure on the November ballot that would protect the right to abortion in Arizona.

The Arizona Department of Public Safety says barricades were put up near the state Capitol to prevent civil unrest following the ruling.

Here is how Arizona leaders are reacting to the decision.

Roe v Wade was a poorly-reasoned ruling that had no Constitutional basis. The Supreme Court has made the right decision by finally overturning it and giving governing power back to the people and the states. 1/

"Attorneys general have a solemn responsibility to defend the most vulnerable among us, and that’s exactly what we did today. I look forward to seeing the issue returned to elected representatives where it belongs. As Americans, we believe in the dignity and value of every person."

“Knowing that this day was coming doesn’t dull the pain. I am heartbroken and I am angry. Republican extremists have plotted for decades to install partisan judges at every level of the judicial system with the goal of ending women’s fundamental freedom to choose our own health care. But we still have a choice 一 at the ballot this November. Governors are now the final line of defense to protect access to safe and legal abortion, and it’s never been more urgent to vote for pro-choice champions at the state level. As governor, I will use my veto pen to block any legislation that compromises the right to choose, and I will do everything in my power to secure women’s rights for the next generation.”

“A woman’s health care choices should be between her, her family, and her doctor. Today's decision overturning Roe v. Wade endangers the health and wellbeing of women in Arizona and across America. Throughout my time in Congress, I’ve always supported women’s access to health care, and I’ll continue working with anyone to protect women’s ability to make decisions about their futures.”

“Today’s decision is a giant step backward for our country. Women deserve the right to make their own decisions about abortion. It is just wrong that the next generation of women will have fewer freedoms than my grandmother did. In Arizona, there are already restrictive bans on the books that will take rights away from Arizona women, without exceptions even in the case of rape or incest. I know that this decision and these laws are leaving many Arizonans frustrated and scared. This is an all-hands-on-deck moment. I am resolved to defend and protect the right of Arizona women to make their own health care decisions.”

Today's decision is a major victory for all unborn children. 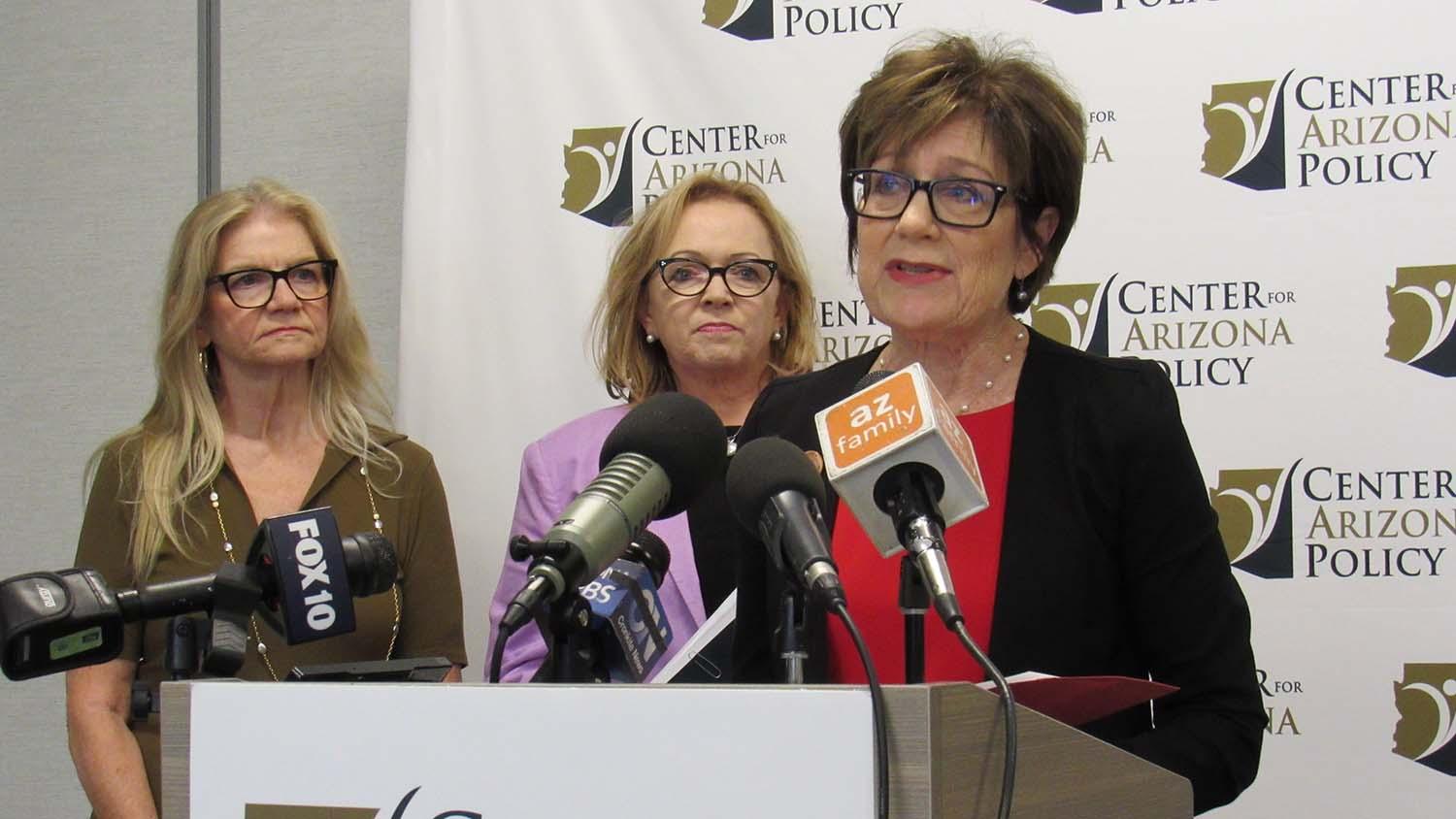 At a news conference Friday, Cathi Herrod celebrated the fall of the landmark ruling Roe v. Wade 50 years ago.

“The court’s decision rights a deadly, decades old wrong. Life is a human right and we can no longer deny the humanity of the unborn child,” said Herrod.

State Sen. Nancy Barto has long been an abortion opponent. At a news conference Friday, Barto said liberals and abortion rights advocates are in a movement of death.

"We’re now on a new battleground. The states are on the front lines and we as state legislators are the primary gatekeepers and policy makers on this new front," said Barto.

The Republican Barto said her goals are to make abortion illegal, unthinkable and give pregnant women the support they need.

"Today, I am enraged — as many of you are. For nearly 50 years, the United States has protected the right to a safe, legal abortion. But today the right-wing majority on the Supreme Court, hellbent on rolling back women’s rights, chose to take our country backwards and endanger the lives of American women by ripping away the right to choose. The ruling will have especially harsh consequences in Arizona. Our state’s long and storied history of attacking reproductive freedom means that Arizonans will feel the impact of this right being stripped away almost immediately. With today's opinion, women and families across the state can no longer count on getting the healthcare they need. The Court's conservative majority does not reflect the majority opinion of Americans on this issue and is a reminder that who we choose to lead our country directly affects our everyday lives. That is why we must be resilient and press forward to pass legislation codifying the right to an abortion. If that means eliminating the filibuster, then it must be eliminated. Make no mistake, this decision strikes against the heart of our American values and will cost American lives. But I for one will not allow my anger to blind us to what we must do to protect women across our country, and I remain committed to fighting for solutions that will make today's unsound ruling null and void."

“Today, I am furious, disappointed, crestfallen. This decision goes back on half a century of legal precedent; it is a mammoth setback for women, families, and our entire nation. My 16-year-old granddaughter will now have fewer rights than my wife had in the 1970s. I firmly support a woman’s right to choose and believe that health care decisions should lie solely between a woman and her doctor. Now, that right and that privacy can be taken away. From the time the draft decision was leaked, the Senate had over a month to take up and pass our Women’s Health Protection Act, which would have codified the federal protections guaranteed under Roe v. Wade into law. They failed to do so.”

As amazing and historic as today is, there is still so much more work to be done to return this country to God. Thank the Lord for this day, and thank you President Trump for making this possible. Let's keep our momentum and push ever forward. For Him.

“The Supreme Court’s decision to overturn Roe will have immediate and devastating effects for Arizona women’s health and safety — and their fundamental right to determine their futures. This is a dark, dark day for our country, and the Supreme Court. For 50 years the Court had recognized the constitutional right to an abortion — and in the pursuit of an extreme, ideological agenda it has rolled out the red carpet for states to criminalize women and their doctors.”

The U.S. Supreme Court made the right decision on Dobbs. The abortion debate will finally be returned to the people through their elected representatives. The Court made it clear that there is no Constitutional right to an abortion and agreed with Constitutional scholars on both sides of the debate that Roe v. Wade was originally decided on shaky legal grounds. Now, more than ever, it is time for us to unite to support vulnerable women and their unborn babies, and it is time for Republicans and Democrats alike to reject violence and intimidation.”

We knew this was coming but it doesn’t hurt any less. With this ruling, people will be criminalized for their personal health care decisions. The public overwhelmingly supports the right to an abortion but now a few unelected extremists have stripped that right from us.

The Supreme Court is no longer a legitimate body; it’s become a partisan branch—putting political party platforms before the American people and legal precedent. This week’s SCOTUS rulings highlight this fact: the courts’ conservatives have dismantled separation of church & state pic.twitter.com/BNFFLFSuoN

“Now it’s more up to the states, and in some states they have protections for women. Arizona doesn’t. In fact, they’re going [in a] different direction,” Grijalva said Friday.

Today, the far-right Supreme Court majority voted to strike down #RoeVsWade and overturn nearly 50 years of precedent that guarantees safe and legal abortions, despite Americans’ broad support for abortion rights.