Republican lawmakers vote to give all Arizona's 1.1 million students access to school vouchers 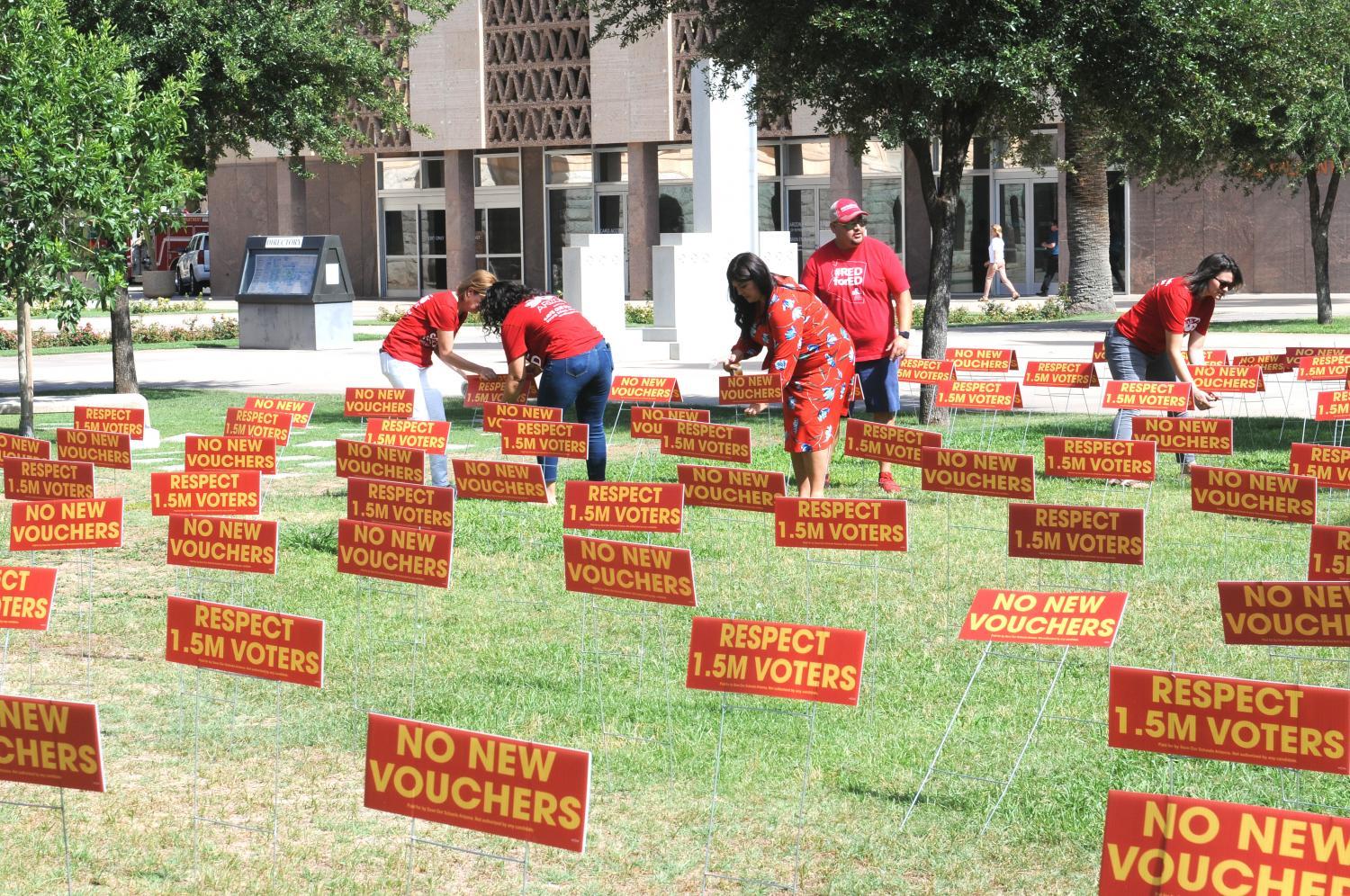 Howard Fischer/Capitol Media Services
Members of Save Our Schools Arizona erect signs on the lawn at the Capitol Wednesday urging lawmakers to reject universal vouchers and honor the will of voters who four years ago voting against expansion.

State representatives voted Wednesday to let any Arizona student get state funds to attend a private or parochial school.

The party-line vote for universal vouchers for all 1.1 million students came even after the Republican majority removed the one bit of accountability that had been inserted in the original plan: a requirement for annual testing of the students who get those tax dollars. Rep. Jake Hoffman (R-Queen Creek), who moved to delete the requirement, said what’s happening at private schools is none of the government’s business, even if the test results would not be made public.

But Rep. Kelli Butler (D-Paradise Valley) said the fact that tax dollars will be flowing to those schools is precisely what gives the state an interest.

“We will not know if students are using our tax dollars — $7,000 is the typical award — if they’re using that money to learn anything,” she said.

House Majority Leader Ben Toma (R-Peoria), who crafted House Bill 2853, said those who demand testing of students in private schools, even if their tuition is being partly or fully funded with state tax dollars, are missing a key point.

“Parents are the ultimate accountability, not government,” he said. “They know what’s best for their children and we should trust them to do the right thing.”

The Senate already has approved a nearly identical measure crafted by Sen. Paul Boyer (R-Glendale). If the Senate concurs with the House version, that paves the way for the proposal to be signed by Gov. Doug Ducey.

That, however, may not be the last word.

Opponents pointed out that the last voucher expansion was overturned by voters in 2018 by a nearly 2-to-1 margin. And leaders of Save Our Schools Arizona, which led that successful referendum, have vowed to repeat that effort.

It wouldn’t take much: They would need to gather only 118,823 valid signatures within 90 days after the end of the session — likely meaning by the end of September at this point — to delay implementation until voters get the last word. And that can’t happen until 2024.

No matter the fate of this measure, it won’t affect the rest of the state budget and, specifically, additional aid to public schools. Toma agreed to remove a requirement in his original plan which linked additional funds for K-12 education to the voucher bill taking effect and not being referred to the ballot.

Arizona lawmakers approved the first vouchers, officially called “empowerment scholarship accounts,” in 2011. Backers said they were necessary for students with special needs who could not get an adequate education in public schools. State and federal courts ruled that the structure of the plan — giving the money as vouchers for the parents to use — means it does not violate state constitutional provisions forbidding the state from giving money to private and parochial schools.

Since that time there has been an incremental expansion of eligibility, to the point where vouchers are now available to foster children, children of military families, reservation residents and students in schools rated D or F. Rep. Steve Kaiser (R-Phoenix), said extending that to everyone makes sense.

“I think that ‘one size fits all’ probably doesn’t work for all of our 1.1 million public school students across the state,” he said.

Less clear is how many students would take advantage of universal vouchers. Despite the broadened categories, fewer than 12,000 students now receive them. One issue: who is able to take advantage.

And a real key, he said, is whether the parents can afford the tuition charged by private schools which can run far higher than the typical $7,000 voucher.

Rep. Melody Herandez (D-Tempe) saw the idea a part of an “elaborate strategy” by those who run private schools to tap into state dollars.

“It’s important to note that education is a multi-billion dollar industry, and there are many who seek to profit heavily through it, through private schools,” she said. At the same time, Hernandez said, these unregulated private schools can determine who to accept “and what the curriculum and rhetoric in those private schools is.”

“This is about keeping people who are not wealthy and who oftentimes are people of color with only schools that severely lack the resources to truly provide that student with the ability to succeed and thrive in our state,” she said.

Toma rejected any suggestion of racism.

“This is exactly the opposite,” he said. “This is giving everyone an opportunity to make full use of all their potential choices.”