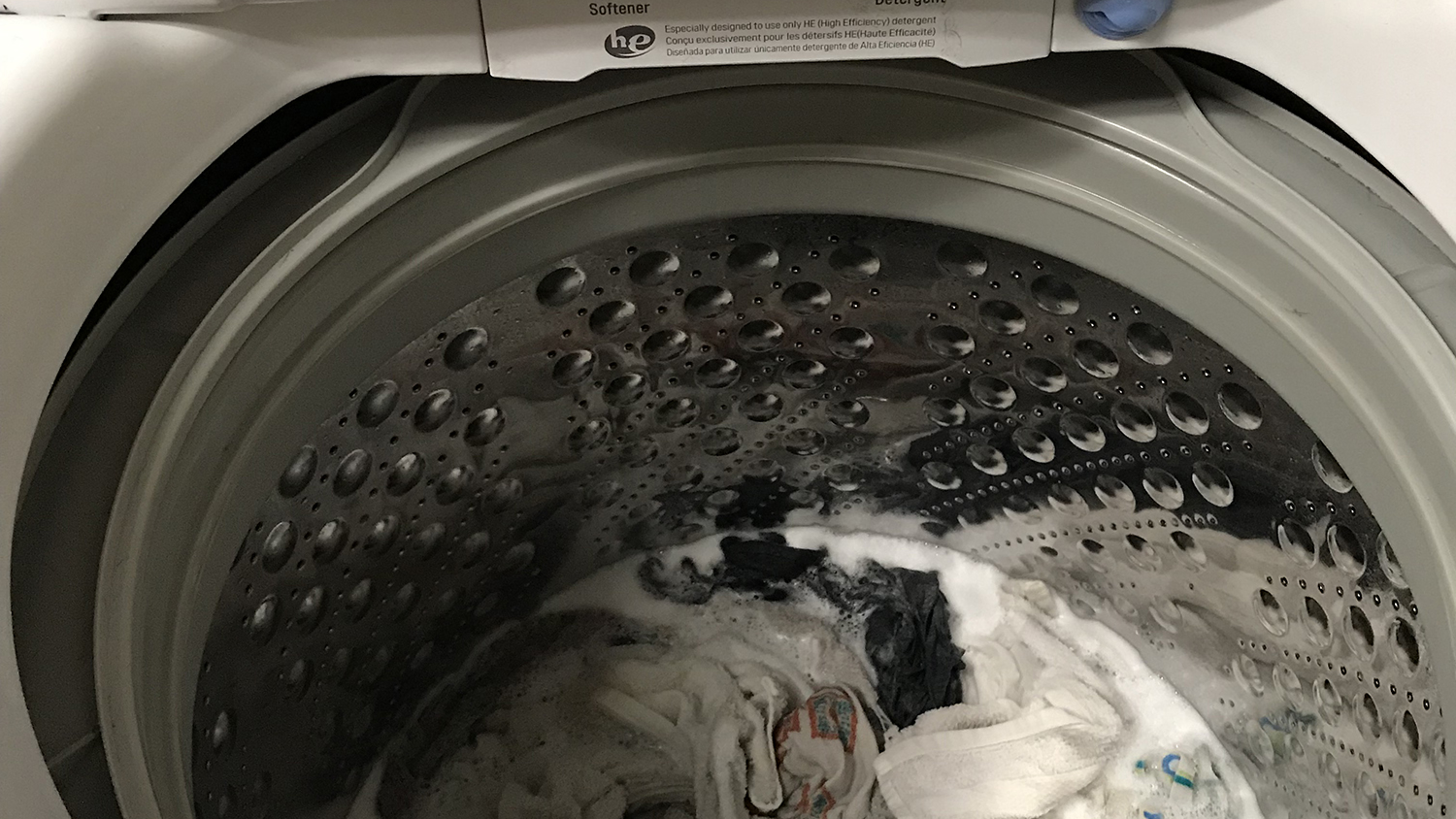 Gray water is water from washing machines, bathtubs, showers or sinks (not including the kitchen sink). Chad Snow/KJZZ

The past three decades have brought mounting evidence of climate change, a tenacious drought in Arizona and appliances offering unheard-of water efficiency.

“The residential water use per capita has been declining for the last 30 years or so. And indoor water use has especially been going down,” said Sarah Porter, director of Arizona State University's Kyl Center for Water Policy.

But civil and environmental engineer David Sedlak, who directs the Berkeley Water Center at UC Berkeley, says there’s only so much a low-flow toilet or Energy Star washer can do.

“The easy things have been done, and the next level of indoor water efficiency will require some form of reuse,” he said.

Every day, Arizonans dump a small flood of drinking water down the drain, whether by running the shower or washing their clothes.

It seems like an untapped reservoir for water conservation: Unlike “black water” — from sewage, kitchen sinks and dishwashers — much of the “gray water” from clothes washers, bathtubs, showers or sinks remains clean enough for other household uses.

That mainly includes landscaping, which currently consumes the lion’s share of residential H2O.

“You know, in some parts of town, up to 70% of household water is going to outside landscaping,” said Porter.

But, despite its clear potential, the reality of gray water remains a bit murky.

From laundry to landscaping 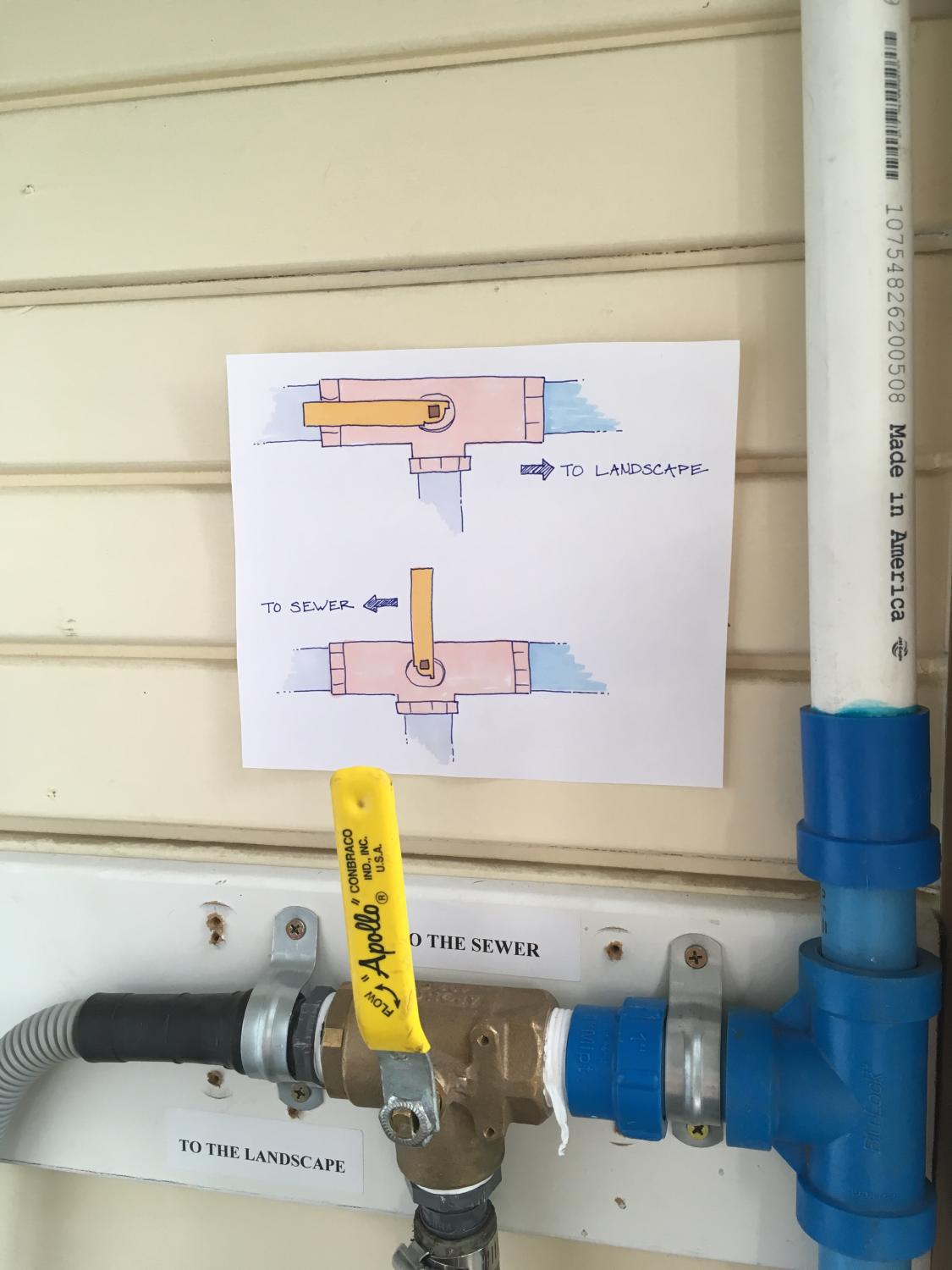 A clearly labeled gray water diversion valve lets the homeowner send washing machine water to the sewer or out to the landscaping. Valley Water

Gray water is typically gravity-fed to water outdoor plants via a diversion valve in a three-way pipe: One pipe directs wash water to the sewer line as usual; the other redirects it to the yard.

“Gray water is essentially water from your house, other than from the kitchen sink or your toilet, because those two are considered to have high bacterial loads,” said hydrologist Thomas Meixner, who leads UA’s Department of Hydrology and Atmospheric Sciences.

That water also can hold harmful oil and grease, so knowing its contents — and proper destination — is vital. Water containing antifreeze, mothballs or solvents, or that has been used for washing diapers, should flow to the sewer, not the yard.

Although the state has some loose guidelines for gray water systems, homeowners can install them with little or no oversight: Gray water systems fall under the Arizona Department of Environmental Quality’s Reclaimed Water Type 1 General Permit, which requires no departmental notification, approval or public notice as long as the system uses less than 400 gallons per day and homeowners comply with the practices defined in Title 18 of the Arizona Administrative Code.

Who, if anyone, would monitor such systems for compliance remains unclear.

“That's the problem with distributed systems in general, that there is less opportunity to make sure that safety standards are being met, because there isn't someone who can run around from home to home and check,” Porter said.

Since 2010, Tucson has required new homes to include gray-water-ready plumbing and has offered residents a rebate of up to $1,000 to reimburse 50% of qualifying costs. But the systems have yet to catch on.

“They've been put in place, but people aren't necessarily using them,” Meixner said.

Coming out in the wash

Possibly, people dislike the hassle of weekly filter cleanings — or of planning the right landscaping.

With the exception of citrus and nut trees, the state prohibits irrigating food with gray water.

Some fear microplastics from laundry pods and other sources might find their way into groundwater, but Meixner says that’s unlikely.

“Most of our communities have pretty thick, unsaturated zones before you get to the groundwater table. And microplastics in particular are likely to be filtered out long before then,” he said.

Arizona also requires that gray water be used only where groundwater lies at least five feet below the surface.

Still, Sedlak agreed homeowners who want to use gray water productively and conscientiously must carefully consider what goes into their wash.

“To take gray water to the next level, we're going to have to pay a little bit more attention to the quality of the water and the types of products that we use inside of our homes,” he said.

To further lessen the chances of human contact or inhalation, Arizona also forbids spraying gray water, so lawn sprinklers are not permitted. Homeowners might be able to water their lawns via flood or drip irrigation, or by bubbling gray water into special mulch traps beneath the soil. But such approaches are complicated by ADEQ’s requirement to avoid human contact with soil irrigated with gray water.

On the other hand, one city survey suggests most residents are simply unaware of the program.

Porter said that might be for the best, since cities often can do more with gray water than homeowners can.

“Tucson is busy running water down the bed of the Santa Cruz and creating a wonderful civic amenity and a little riparian restoration and accruing groundwater credits,” she said. 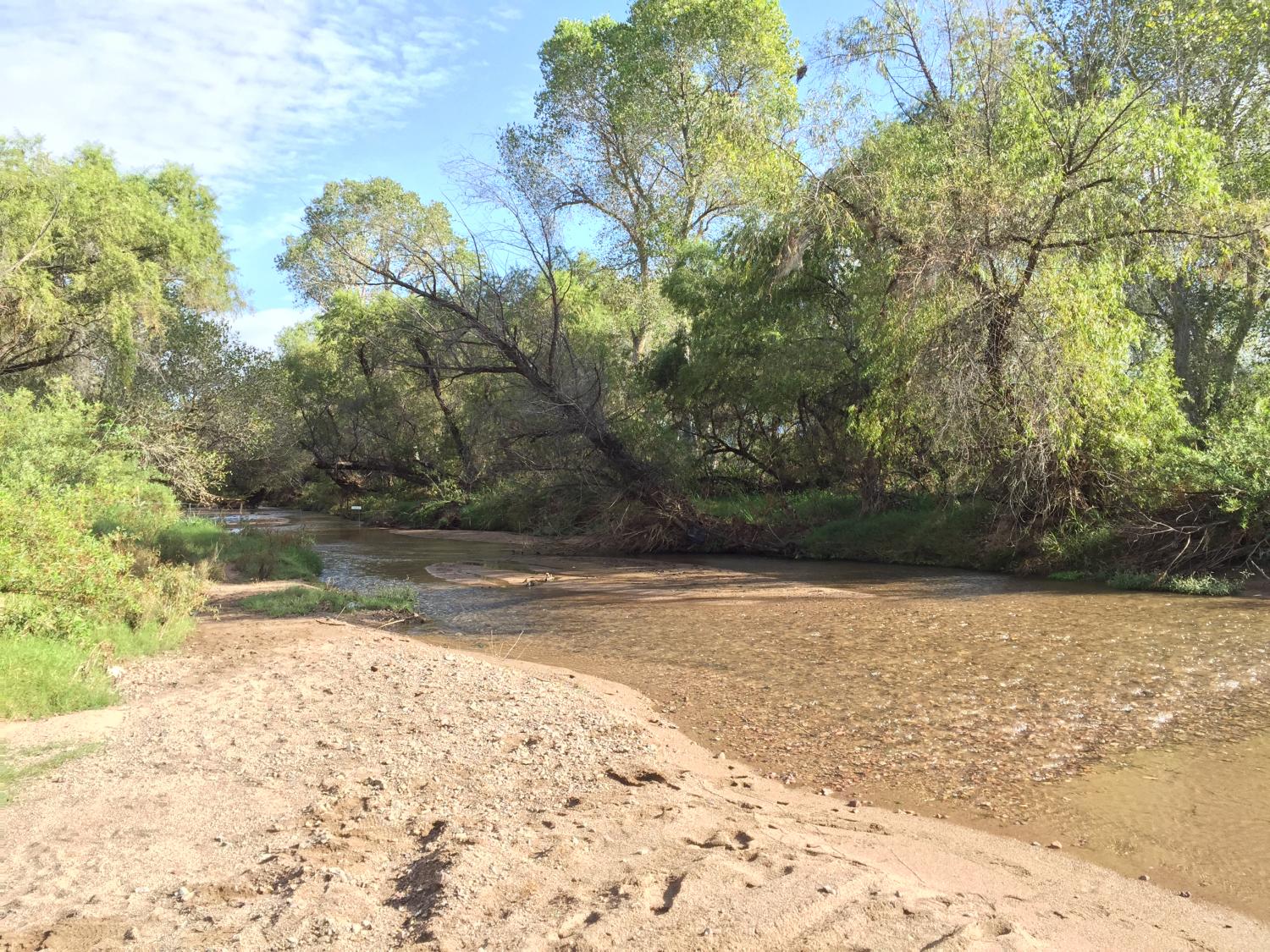 The Santa Cruz River. Will Stone/KJZZ

Comparing household reuse to what municipalities can do with the same water further muddies the picture. Cities in Arizona and other Western states already lead the nation in reusing and recycling wastewater.

“Of the 98 wastewater treatment plants that are treating in Arizona, 93% to 95% of the water that they treat is recycled or reused in some way,” Porter said.

“They have to treat the effluent anyhow. When they can treat it and then use it for another purpose, it's coming in way under $2,000 per acre-foot. That has very high value for them,” she said.

And the Groundwater Management Act of 1980 lets providers earn water credits for storing treated gray water and other effluent. 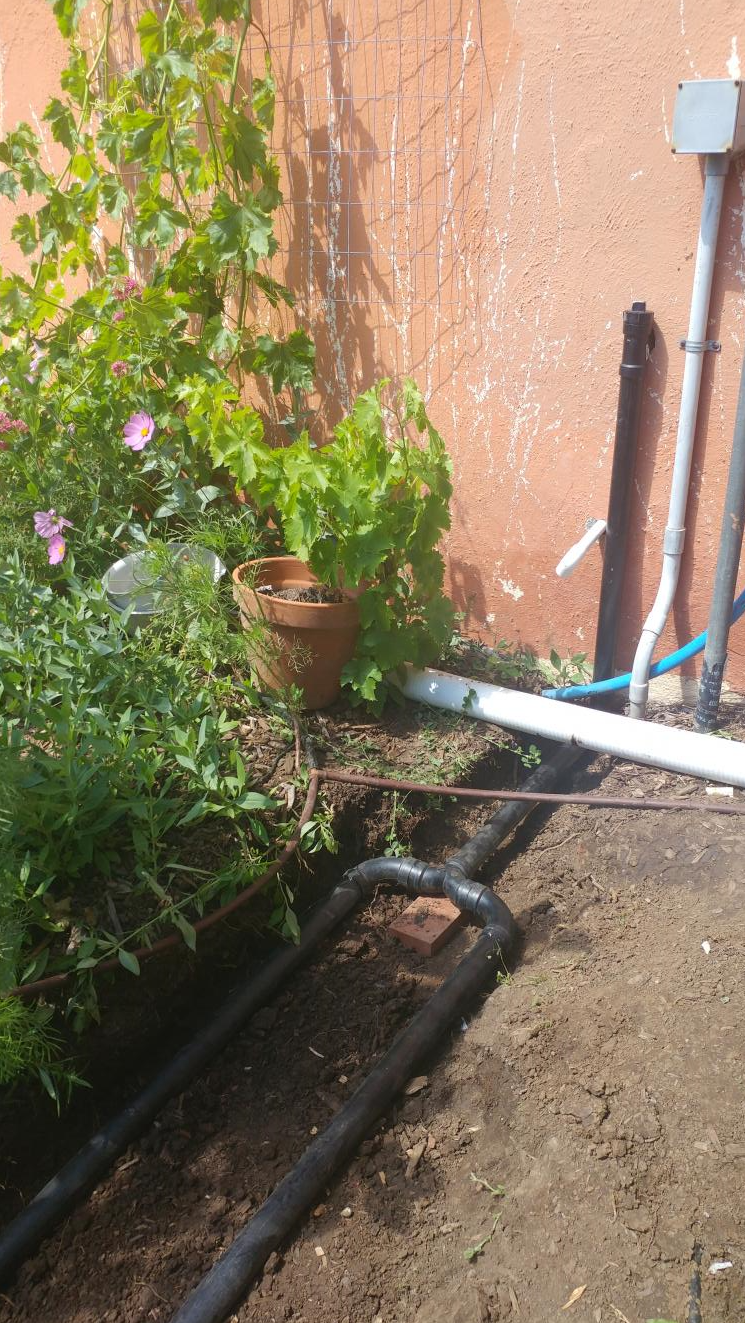 The exterior pipes of a gray water system (black), including the auto vent (top cap), which allows air into the system to prevent siphoning water from the washing machine. Valley Water

“Cities can have a degree of assurance, when they treat their effluent and put it in the ground for later recovery and use, that that water will be there,” Porter said.

Thus, cities bank water against future needs. Conversely, a home gray water system supports only one household, which typically must use the water as it becomes available and before it spoils. So, water supply stays flat, even as irrigation demands rise and fall.

“In centralized water recycling projects, we solve that problem by using the excess water generated in the wintertime to recharge groundwater aquifers,” Sedlak said.

Sending water to daffodils instead of down the drain could also slow or stop sewers, which engineers designed to handle, and rely on, larger volumes of water.

“The gravity-fed sewers were built in an era with much higher water usage,” Meixner said. “There have occasionally been issues here in Pima County where the sewer department has had to go in and power flush sewer drains.”

On the other hand, rural Arizonans not connected to city water and sewer lines might find such systems stretch water supplies and lengthen gaps between pricey septic servicings.

“People often are not served by a centralized sewage collection system, or their local sewage treatment plant might not be recycling their wastewater. So those are the places that are the real sweet spots,” Sedlak said.

But gray water systems still require a lot of attention.

“It’s easy to have an irrigation system that's set on a timer; you set it and forget it. With a gray water system, you have to actively manage it; you have to be engaged with it and, you know, life happens, people have other things to do,” Meixner said.

“I think gray water is an element of the solutions available to us. But my suspicion is, it's generally going to be a fairly minor component, because it requires people to change so much,” Meixner said.

As an example of how technical evolution can drive adoption, Sedlak pointed to the widespread use of modern gas-fired forced air furnaces, which could cause fires or release dangerous gases.

“But they don't do that, because the systems are built to operate for long periods without a lot of consumer engagement. And, when they fail, usually a service company comes in and fixes them,” he said.

Some forward-looking companies are working on similarly improving gray water systems. Others are also developing systems that treat and recycle water for in-home use. 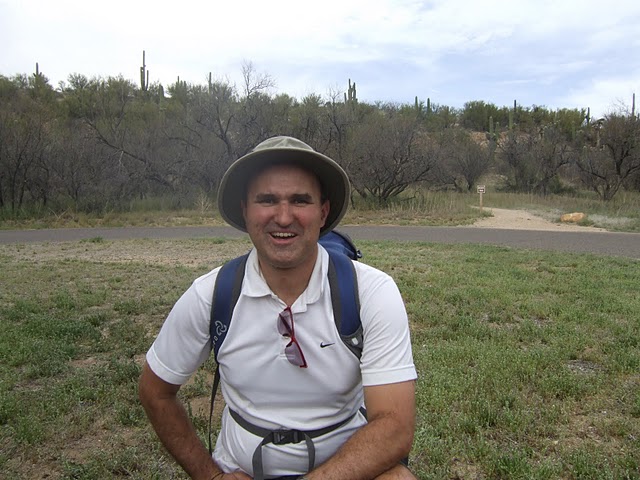 “We’re starting to see the development of equipment that allows people to recycle water produced, say, in the shower for washing their clothes or for some other purpose in the house. And that cuts this connection between gray water production and its sole use for landscaping,” Sedlak said.

Such systems are priced out of reach for most consumers and likely will remain so unless, or until, economies of scale catch up.

For now, although gray water facilities do crop up among universities, office parks and other early adopters, the supply they provide is just a drop in the bucket compared to the demands of landscaping.

“To improve water resilience in central Arizona, using gray water outside wouldn't make my list at all. What would make my list would be reducing the amount of water we're using outside,” Porter said.