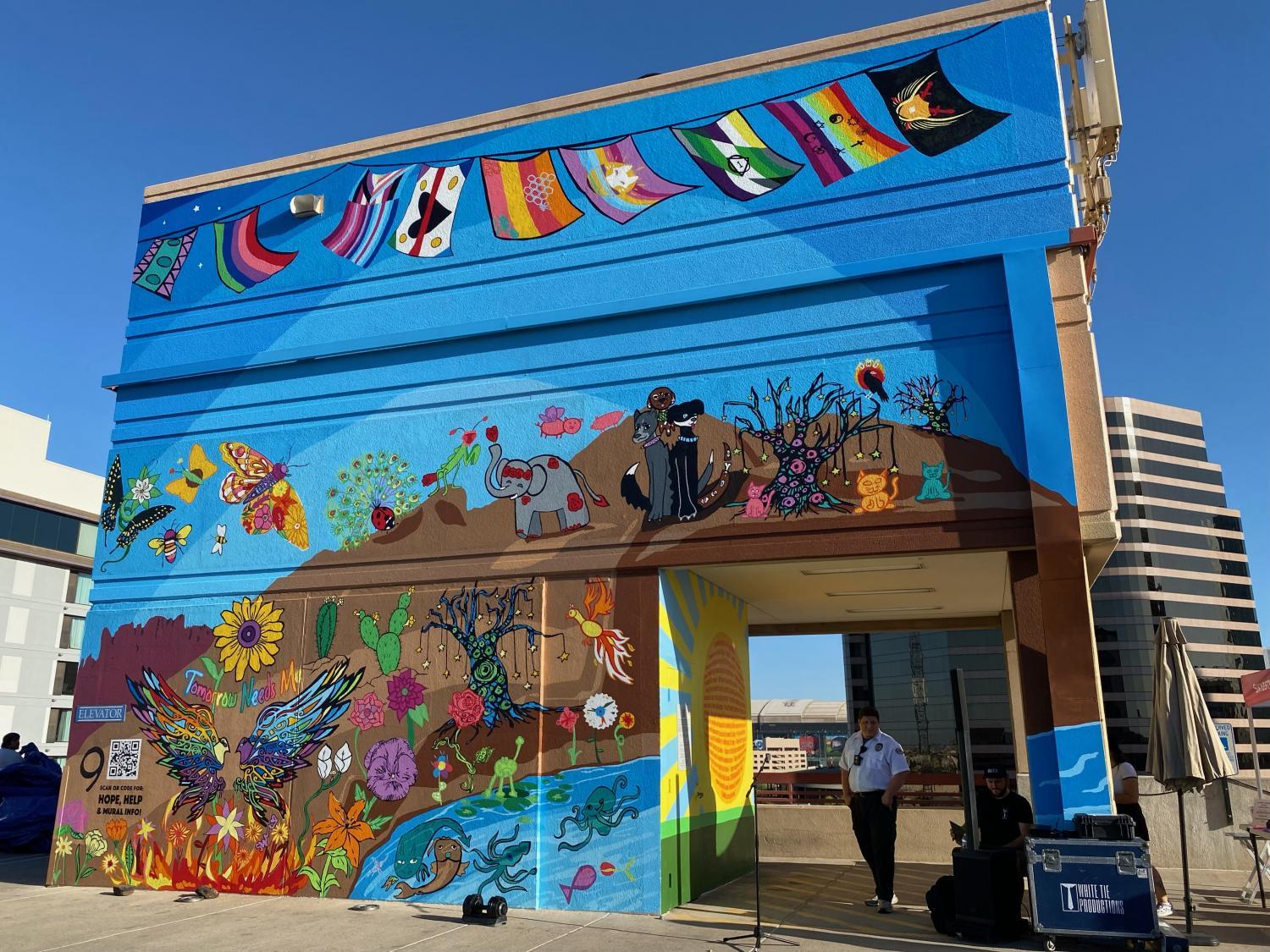 Keiko Ratcliffe/Skye's the Limit Foundation
A full view of two of the three walls. The top of the mural is lined with flags indicating different identities. Under an overhang is a big, cartoonish sun inscribed with the poem "Tomorrow Needs You" by Jamie Tworkowski of To Write Love On Her Arms.

Keiko Ratcliffe is the founder of Skye’s the Limit Foundation, which provides suicide prevention and substance misuse resources for young adults. This summer, the foundation unveiled its newest project: a community mural at the top of the Arizona Center’s parking garage.

“The purpose of the mural was for it to be compelling, so that people would take interest in it and look at it. And, it’s very unique and individualized because it wasn’t created by one artist, it was created by people, regular people who aren’t artists," Ratcliffe said.

Titled “Expressing Ourselves! Identity, Diversity & Thriving in Adversity,” Ratcliffe teamed up with local artists like Jesse Yazzie and hundreds of community members to create the mural using a paint-by-number method. While this method is uncommon for muralists in the Valley, Yazzie said it opened up new opportunities for anyone to pick up a paintbrush.

“To have the mural actually detached and posted inside of the classroom, and having like 12 people working on it at the same time is really new. But it’s a very, very effective method for engaging the community," said Yazzie. 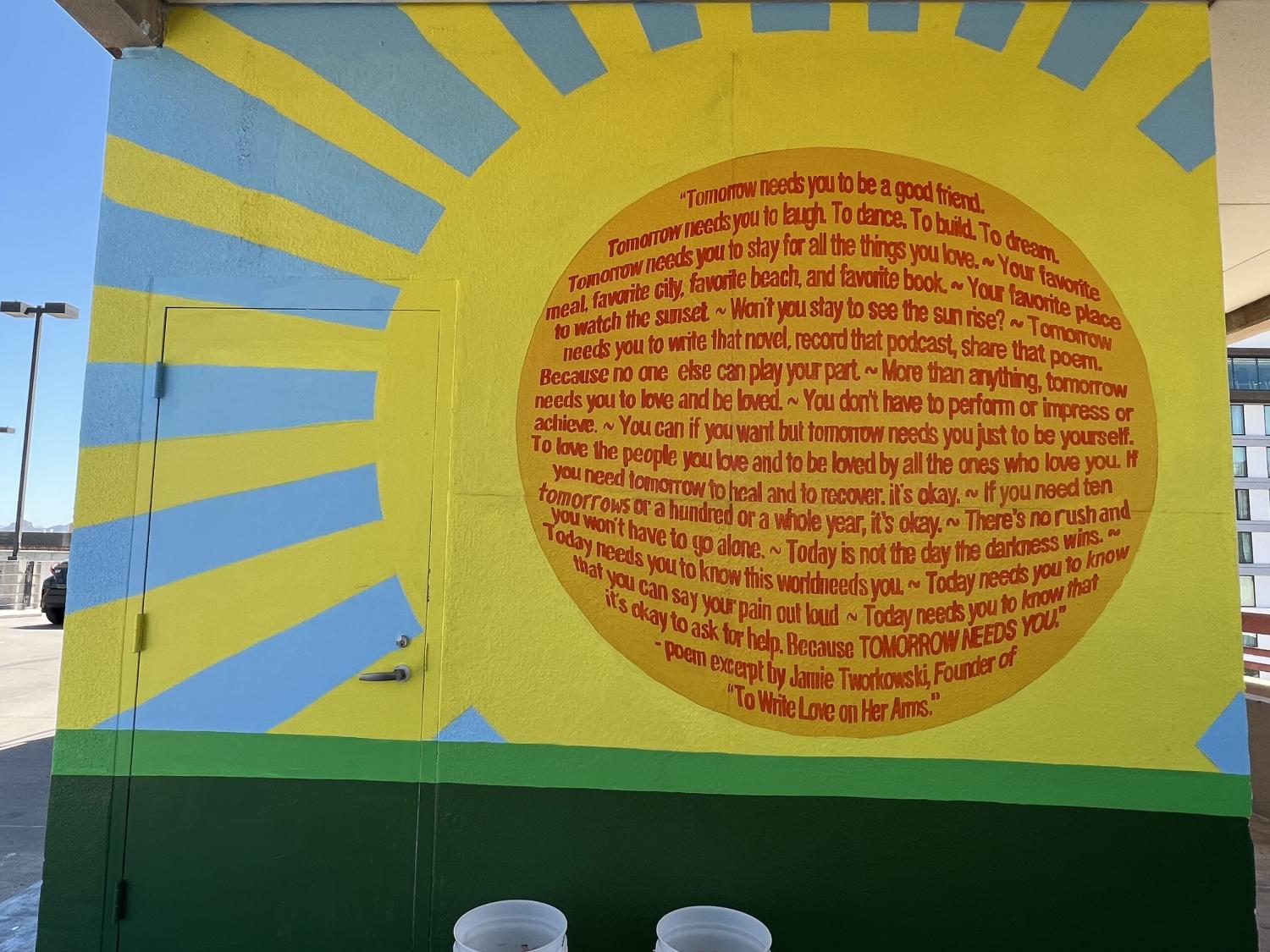 Keiko Ratcliffe/Skye's the Limit Foundation
The center of the sun is filled with words from the poem "Tomorrow Needs You" by Jamie Tworkowski of To Write Love On Her Arms.

Skye’s the Limit foundation and the Arizona Center unveiled the finished project together on May 21, in honor of Mental Health Awareness month. 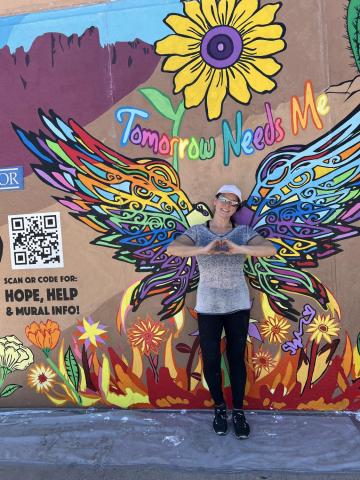 The foundation sent out questionnaires to residents of all ages to collect designs and ideas for the mural. Participants were asked to draw themselves represented as flowers, for example. The composition was rendered digitally, then enlarged to fit 41 5x5 panels of pellon, a paper-like fabric.

Community members were able to trace the digital rendering onto the pellon by projecting the image onto the wall of a classroom at Sueños Youth Center at Neighborhood Ministries. Unique colors were hand-mixed and assigned to corresponding sections of the mural, making the project accessible to all ages and skill levels.

Once painted, the panels were glued and pasted like wallpaper on three 26-foot walls on the top floor of the Arizona Center’s parking garage, and sealed together to remove any seams. This installation process took five days.

One prominent design feature is a “selfie spot,” where two birds sit facing one another with their wings outstretched behind them, resembling butterfly wings when viewed altogether.

The birds are a colorized version of a drawing made by Skye Ratcliffe, Keiko’s daughter, who passed away in 2014 at age 19. Above the birds are the words “Tomorrow Needs Me.” To the left is a QR code with local and national mental health resources, captioned “Scan QR code for: hope, help & mural info!”

EDITOR'S NOTE: This story has been modified to correct Elody Gyekis' title, the project timeline and location. 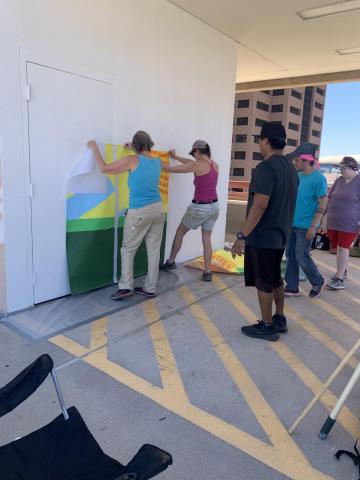 Keiko Ratcliffe, Skye's the Limit Foundation
The installation team lays down one finished panel at a time.
Arts + Entertainment Social Justice
Listen to this story