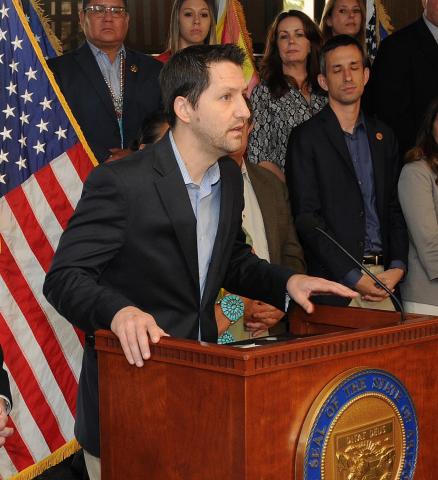 Republican leaders in the Arizona House and Senate are shopping a $15.1 billion budget to lawmakers this week. But the spending plan, which includes $1.3 billion in tax cuts and $1 billion for water over the next three years, won’t pass as is.

At least one GOP lawmaker, Sen. Paul Boyer of Glendale, says he opposes the plan. Republicans are trying to pass a budget with GOP votes only, and with only one-vote majorities in both legislative chambers, they can’t afford to lose a single GOP vote.

Boyer likely isn’t the only Republican who opposes the plan — it spends far more than a previous budget plan that failed a House committee in April because some GOP representatives felt it spent too much.

Lawmakers have roughly three weeks to pass a spending plan before a June 30 deadline — the end of the fiscal year. If not, they risk a state government shutdown.

The three-year spending plan is the result of weeks of negotiations. Sen. J.D. Mesnard (R-Chandler) sat through a two-hour briefing with Senate leaders on Monday, going through 10-pages of budget line items in detail.

“My impression is that this is the typical step, where the House, Senate leadership and governor's office have reached an agreement, to go back and shop to the members,” he said.

In that sense, budget documents obtained by KJZZ News mark a new starting point in the negotiation process — if a budget is passed by June 30, it will have changed to meet the demands of certain lawmakers who want to see spending changes.

Boyer has asked for $1 billion investment in K-12 public schools — district and charters — that’s simply not there. And while there is some new money for public education, Boyer described it as a shell game. For example, a 2.5% increase in base teacher pay is offset by eliminating extra pay based on teacher experience and a separate teacher compensation fund.

“So they're saying that they're putting in $49 million for the base,” Boyer said. “But what they're doing is they're getting rid of those two amazing programs.”

“The reason why that's important is, that's ongoing, and it can't be cut. And it's inflated every single year. And it's also flexible,” he said. “So if the school has an AC unit that's out, if they want to hire more teachers, if they need more buses … they can use it for whatever their respective needs are.”

Boyer has a list of other demands, and declared himself a firm no if they’re not met.

Without Boyer’s vote, Republican leaders would need to court Democrats to vote for the budget. But so far, it appears nothing has been done to sway the minority party. Boyer said the budget draft was pitched only to Republicans as a “Republican budget.”

Part of the budget deal may include a nonstarter for Democrats: universal school vouchers.

Three bills were introduced on Monday in House Rules to expand Arizona Empowerment Scholarship Accounts, or ESAs. Voters rejected universal vouchers in a 2018 ballot referendum, but that hasn’t stopped Republicans from trying to expand school vouchers anyway – and now some could use their votes on the budget to demand it.

Rep. Ben Toma (R-Peoria) told the Arizona Republic the trio of ESA bills is separate from the budget for now, but could merge with the budget as part of a package deal.

This draft budget is separate from the K-12 bills that were introduced Monday. @RepBenToma said they will move on separate tracks but at some point, if they stay alive, it will merge in the budget

Democrats have overwhelmingly rejected GOP attempts at school voucher expansion, and would oppose a budget that was tied to such a policy.