U.S. 60: The latest on the freeway closure in Tempe

May 17: Work continues to reopen the U.S. 60 westbound lanes 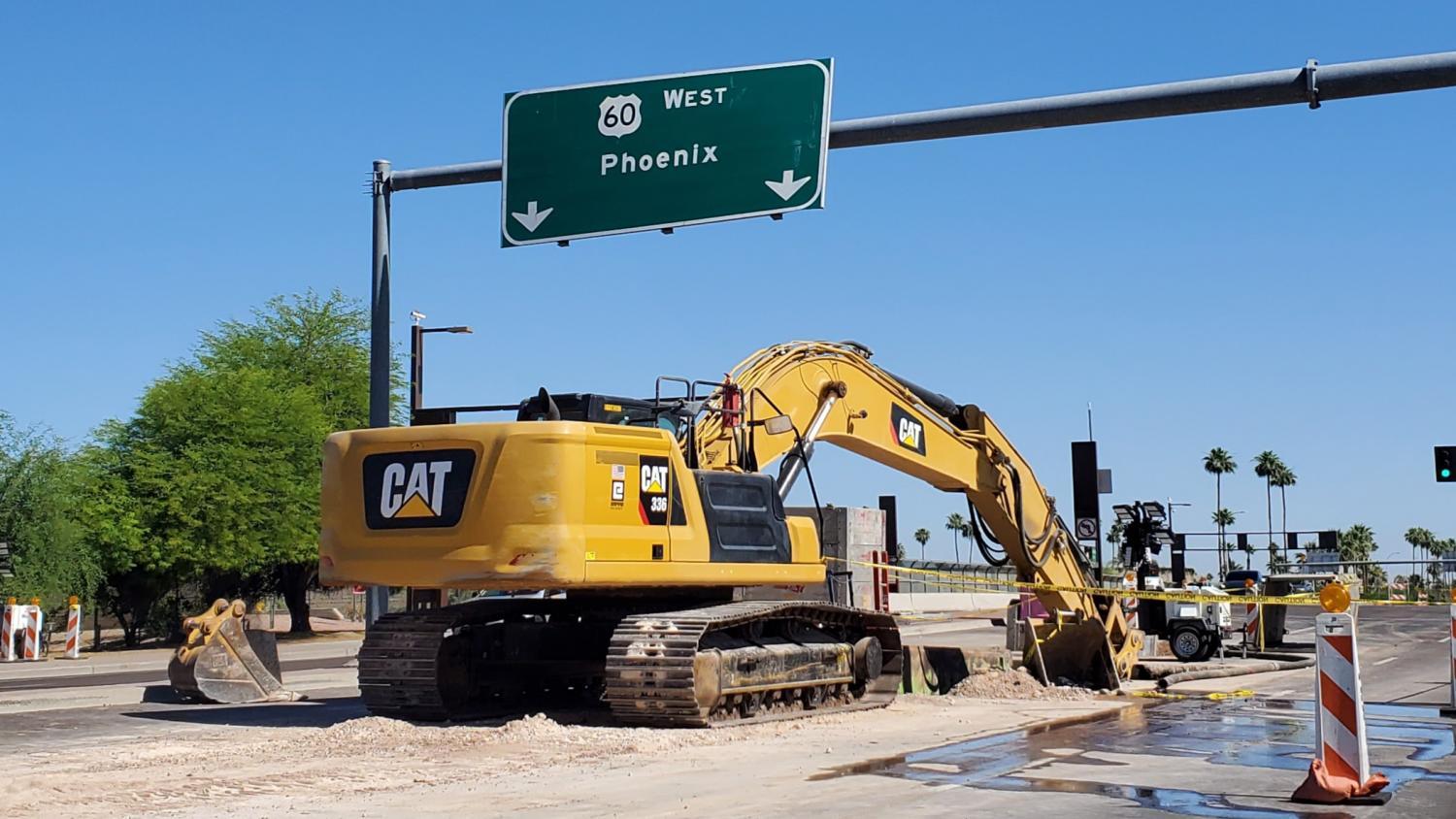 Jean Clare Sarmiento/KJZZ
Northbound McClintock Drive at the U.S. 60 is down to one lane because of construction on May 16, 2022.

Work continues to reopen the U.S. 60 where there was a water main break. Eastbound lanes have reopened, but some ramps and the westbound remain closed.

Chris Kabala is the principal civil engineer with the city of Tempe.

He says coordination among different agencies was done quickly to start repairs, and they faced obstacles.

“There’s a shortage of concrete so we were able to get some contractors that have access, they have their own concrete plants and they could make the concrete for the repairs so that worked out pretty good," Kabala said.

Kabala also says the water pipe was in the ground for 50 years but had a life expectancy of 75 years.

He says it’s unclear what the total cost of repairs will be.

The eastbound lanes on the U.S. 60 through Tempe reopened on Sunday afternoon, Tempe officials said in a press release.

The eastbound off-ramp at McClintock Drive is staying closed for ongoing repairs.

Work continues on the U.S. 60 westbound lanes, which are still closed between the Loop 101 and McClintock Drive. There’s no estimate for reopening the westbound side.

May 14: Westbound portion of U.S. 60 is facing an extended closure

More than a week after a water main break closed a portion of U.S. 60 in both directions in Tempe, the freeway’s eastbound lanes were set to be paved Saturday.

Eastbound lanes may reopen next week, but the westbound portion is facing an extended closure.

“The westbound lanes lifted more than the eastbound lanes, so ADOT was not comfortable leaving the existing concrete and paving in place without getting it rebuilt and reconstructed," said Mark Weber is with the city of Tempe.

While both sides of the 60 remain closed, Weber expects McClintock Drive — the main cross street in the area — to remain open through the repair of the water pipe over the next few weeks. 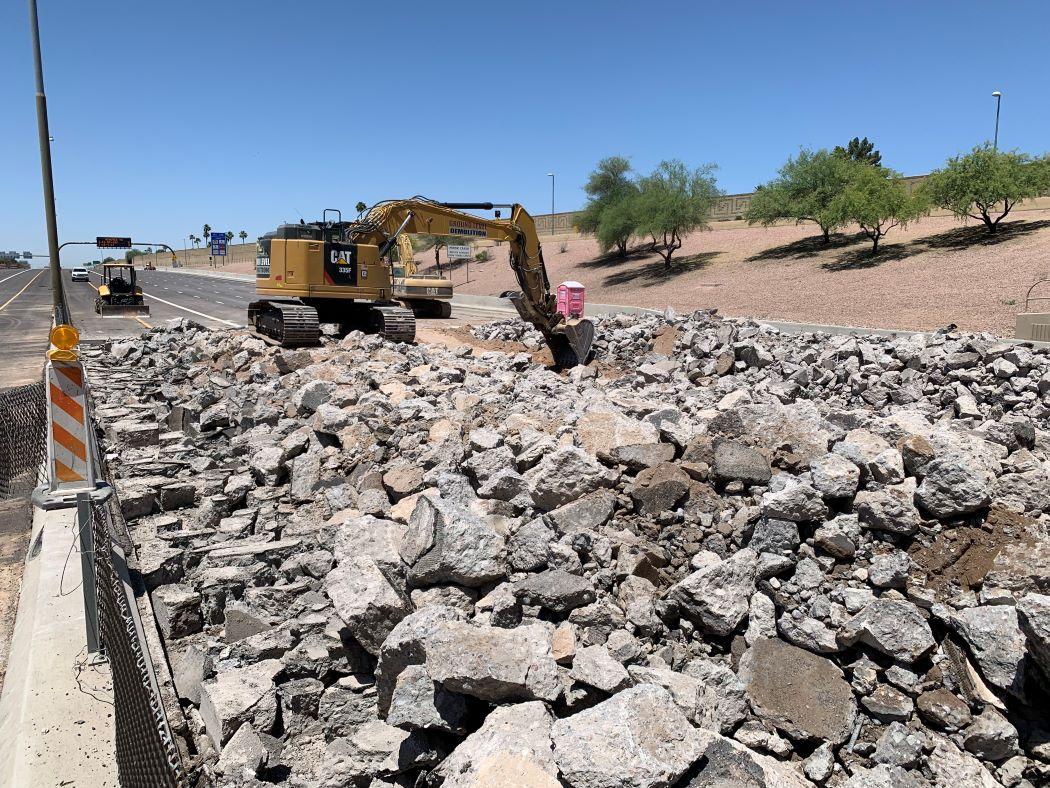 Arizona Department of Transportation
Construction on the damaged U.S. 60 in May 2022.

The top engineer for the city of Tempe says part of eastbound U.S. 60 could reopen early next week after flooding caused by a water main break forced its closure last weekend.

In a Thursday update to reporters, Julian Dresang said he expects a second segment of fast-drying, reinforced concrete to soon be poured.

“Once tests of the concrete demonstrate that it has hardened sufficiently, an asphalt surface will be installed on top. Shortly thereafter the pavement can be striped and the roadway opened to traffic,” said Dresang.

Dresang said there is no estimated date to reopen a westbound portion of the freeway also closed by flooding from the water main break.

“Westbound U.S 60 has the greatest amount of damage and will require pavement removal and replacement for the full width of the freeway,” he said.

Reconstruction crews are making progress on the U.S. 60 after a water main break caused a portion to flood.

Concrete could be poured as early as today for the eastbound HOV lane at McClintock.

Construction crews are still working on a plan for rebuilding westbound lanes there.

The water break is off the freeway behind a wall near McClintock Drive’s westward off-ramp. The city of Tempe says this will allow for crews to work on that independently of the freeway repairs. 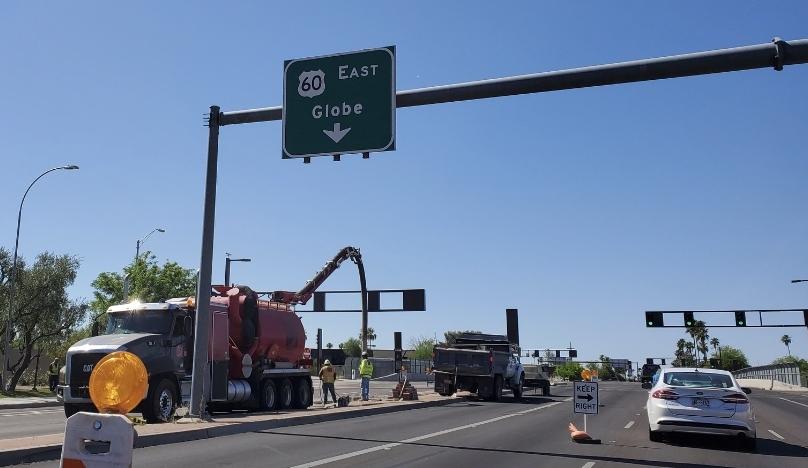 Jean Clare Sarmiento/KJZZ
Construction on the U.S. 60 overpass at McClintock Drive on May 8, 2022.

May 9: ADOT isn't sure when U.S. 60 stretch in Tempe will reopen after water main break

The U.S. 60 is still closed between Rural Road and the Loop 101 in Tempe after a water main break early Saturday morning temporarily flooded the freeway.

“And more than that, if it gets underneath the roadway there, the conditions of the roadway and the underlying subsurface, that’s important. We don’t want to put traffic on a freeway, or any roadway, where there’s questions about that.”

Tempe said Monday it has pinpointed the leak originating just north of the freeway and west of the 101, and workers are now focusing on repairing the pipe. In the meantime, the Arizona Department of Transportation will concentrate on repairing road damage in order to get traffic moving again. The city also is ensuring residents continue receiving water while the work takes place. 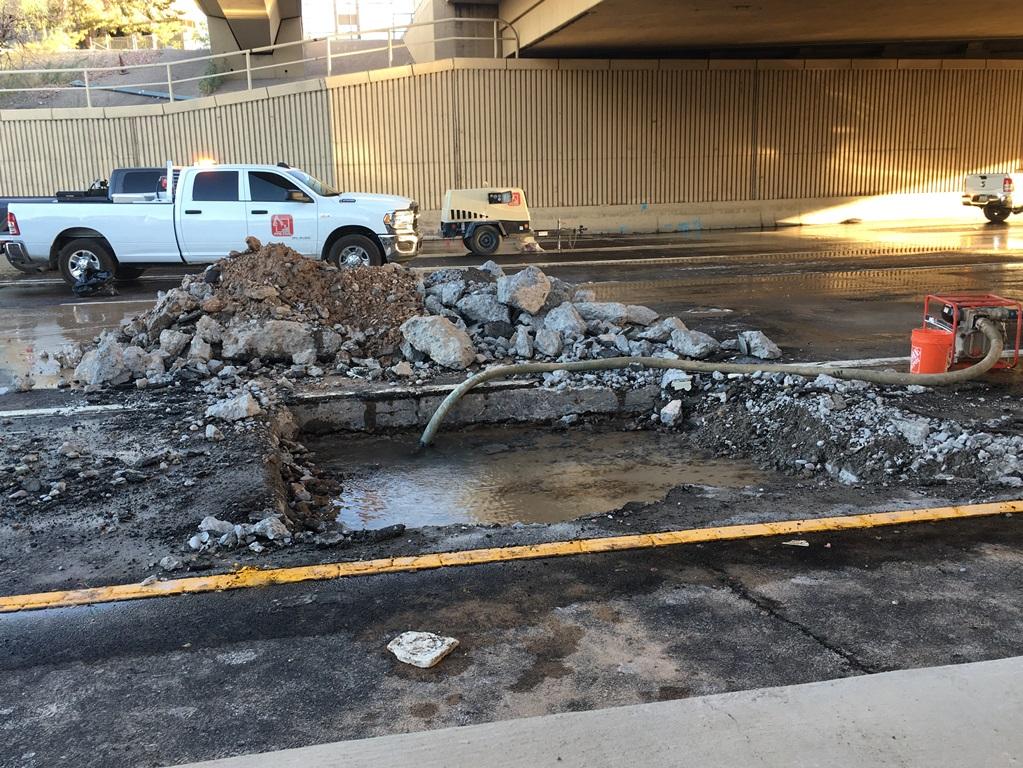 “City employees and the contractors we work with are genuinely working tirelessly around the clock to address this issue and get the issue repaired and get the roadway reopened," said Nikki Ripley, a spokeswoman for Tempe.

Although millions of gallons of water leaked when the pipe burst, Interim Municipal Utilities Director Tara Ford said that most of it was recaptured underground.

The U.S. 60 closure forced crews to postpone work on the I-10 Broadway Curve Improvement Project, the city of Tempe said in a press release. A planned closure of the eastbound I-10 between the U.S. 60 and Loop 202 freeways will be rescheduled for a later date. 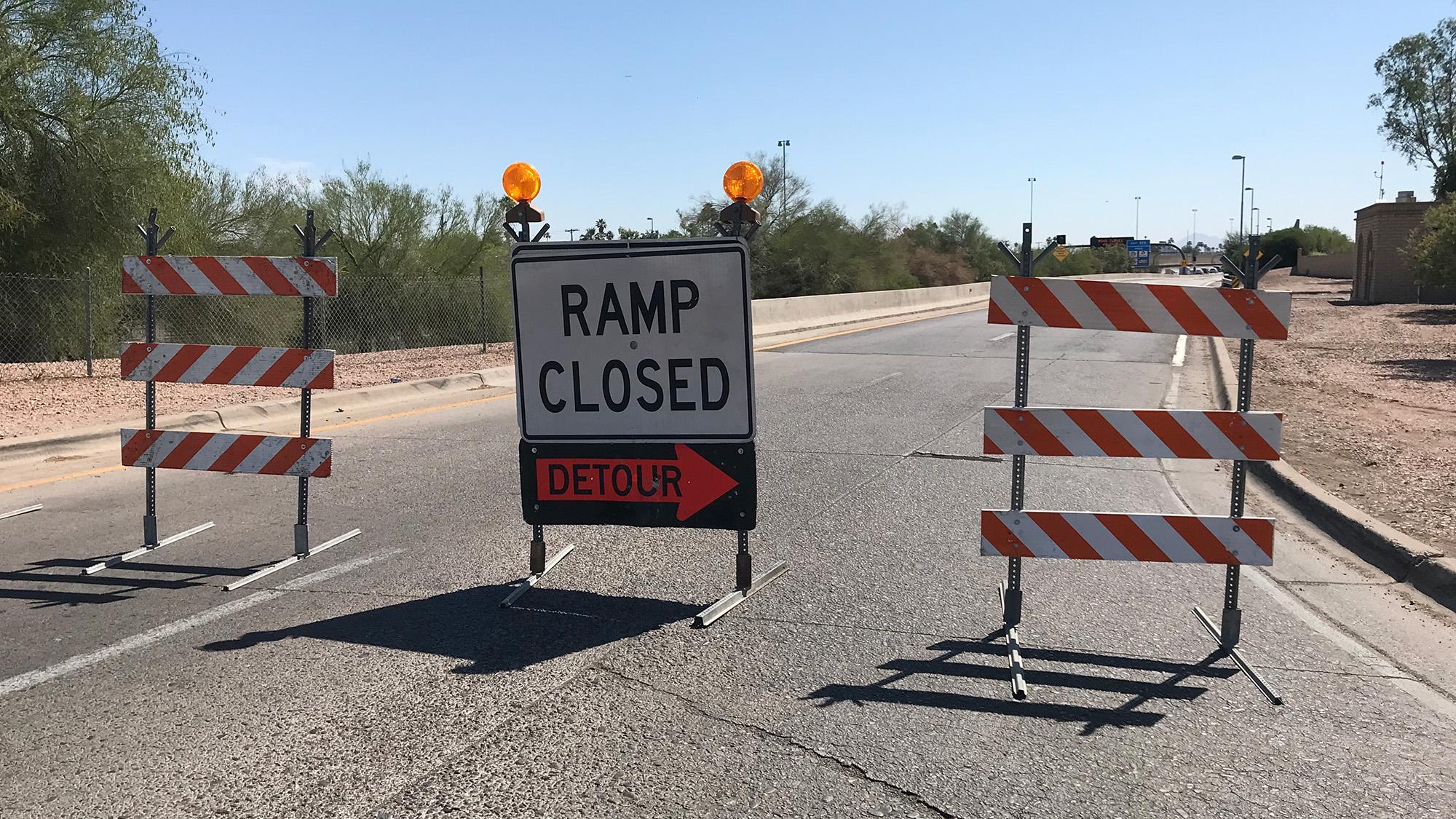 Chad Snow/KJZZ
A U.S. 60 on-ramp is closed at Rural Road in Tempe after a water main break shut down the freeway on Saturday, May 7, 2022. 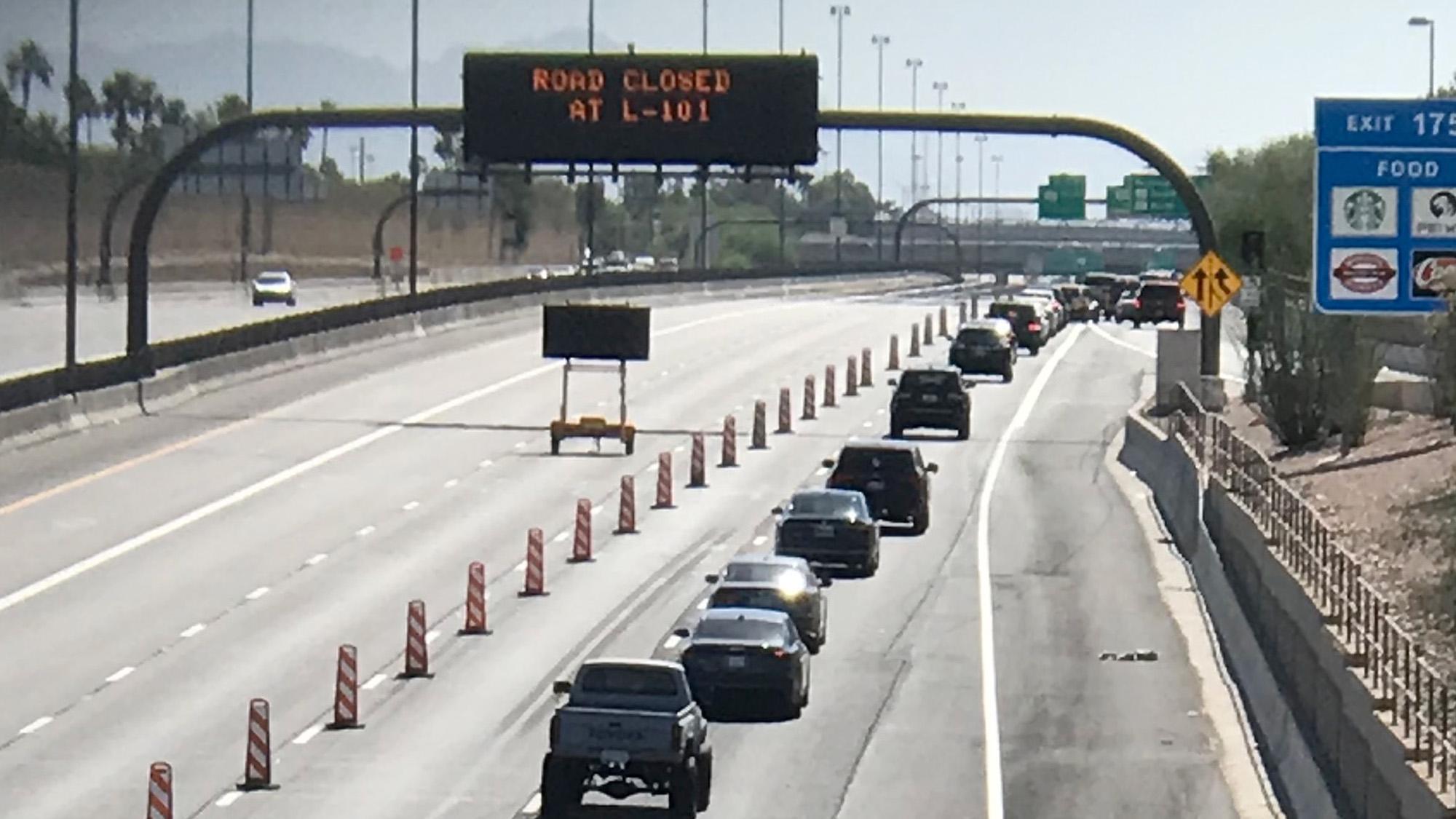 Chad Snow/KJZZ
Cars exit the U.S. 60 after the freeway was closed due to a water main break on Saturday, May 7, 2022.
Transportation