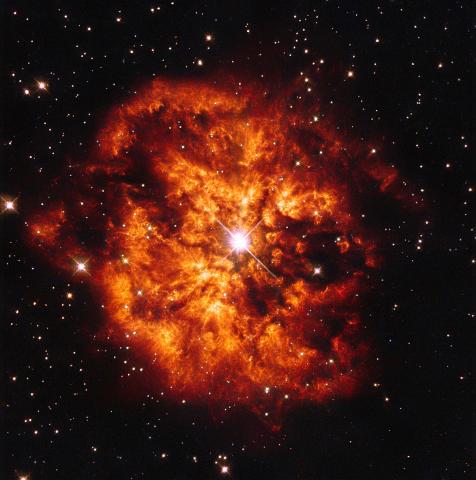 ESA/Hubble & NASA, Acknowledgement: Judy Schmidt.
The Wolf-Rayet star Hen 2-427 (aka WR 124) lies within the nebula M1-67. The image was captured by the Hubble Space Telescope in the constellation of Sagittarius and lie 15,000 light-years away.

Astronomers have a pretty clear picture of how stars evolve as they age.

But new data soon to appear in the Astrophysical Journal could alter that view and help solve a mystery about black holes.

"To find that we had found something that different from what evolutionary models predict was quite surprising and shocking to me," said lead author Erin Aadland, a doctoral student working at Lowell Observatory and recent NAU graduate.

Wolf-Rayet stars represent the final stage in the lives of some massive stars, the end result of eons spent forging heavier elements from lighter ones and a last gasp before they explode.

"You learn a lot by looking at stars at the extreme," said co-author Philip Massey, an astronomer at Lowell Observatory.

When researchers studied the spectra of such stars in a nearby galaxy, the Large Magellanic Cloud, they found they contained more carbon and less oxygen than expected.

The Wolf-Rayets studied could explain black holes detected from gravitational waves but occurring in a range of masses astronomers considered impossible: Under expected carbon-oxygen ratios, such stars would explode violently and leave behind no black hole.

"There were in fact, a couple of papers published that I was unaware of that said, 'Gee, if only this reaction rate that produces oxygen was lower than what people have assumed, you could make black holes in this mass range,'" Massey recalled.

Named for astronomers Charles Wolf and Georges Rayet, who discovered them in 1867, Wolf-Rayet stars sport an unusual spectral pattern. Where the spectra of other stars tend to be interrupted by dark absorption bands, the spectra of Wolf-Rayets contain bright emission lines.

In one subtype, WO stars, that spectrum seemed to imply high oxygen content.

"But whether that one oxygen line is actually formed from a higher oxygen abundance, meaning that the WOs are further chemically evolved, or whether it's due to something else, like temperature, has never actually been looked at before our study," said Aadland.

With the new data, astronomers can better nail down the reaction rate in such stars and understand what those emission lines mean.