Hundreds of feet in the air, Sonoran highliners face fears and find balance

Hundreds of feet in the air, Sonoran highliners face fears and find balance

On a recent April morning, it was warming in the dappled light of a backyard citrus grove in remote Huasabas, which sits in a river valley flanked by soaring, dry sierras.

Using the dirt as a white board, a sizable, motley crew of adventurers — mostly Sonorans, a Belgian, and even a ferret named Toto — was putting the day's plan together. Their task deserved careful deliberation: safely stringing webbing tightropes across the chasms of Sonora’s famed Cruz del Diablo — or Devil’s Cross — Canyon, whose sheer walls rise hundreds of feet.

To span one sizable gap that day, they’d turn to an ancient technology: the bow and arrow.

Sitting in her tent, 22-year-old University of Sonora biology student Argelia Gil Samaniego was methodically getting ready for the day. She’d been practicing highline — a discipline of the balancing sport slacklining that features lines strung dozens or even hundreds of feet in the air — for a few years, but this would be her most ambitious effort yet. 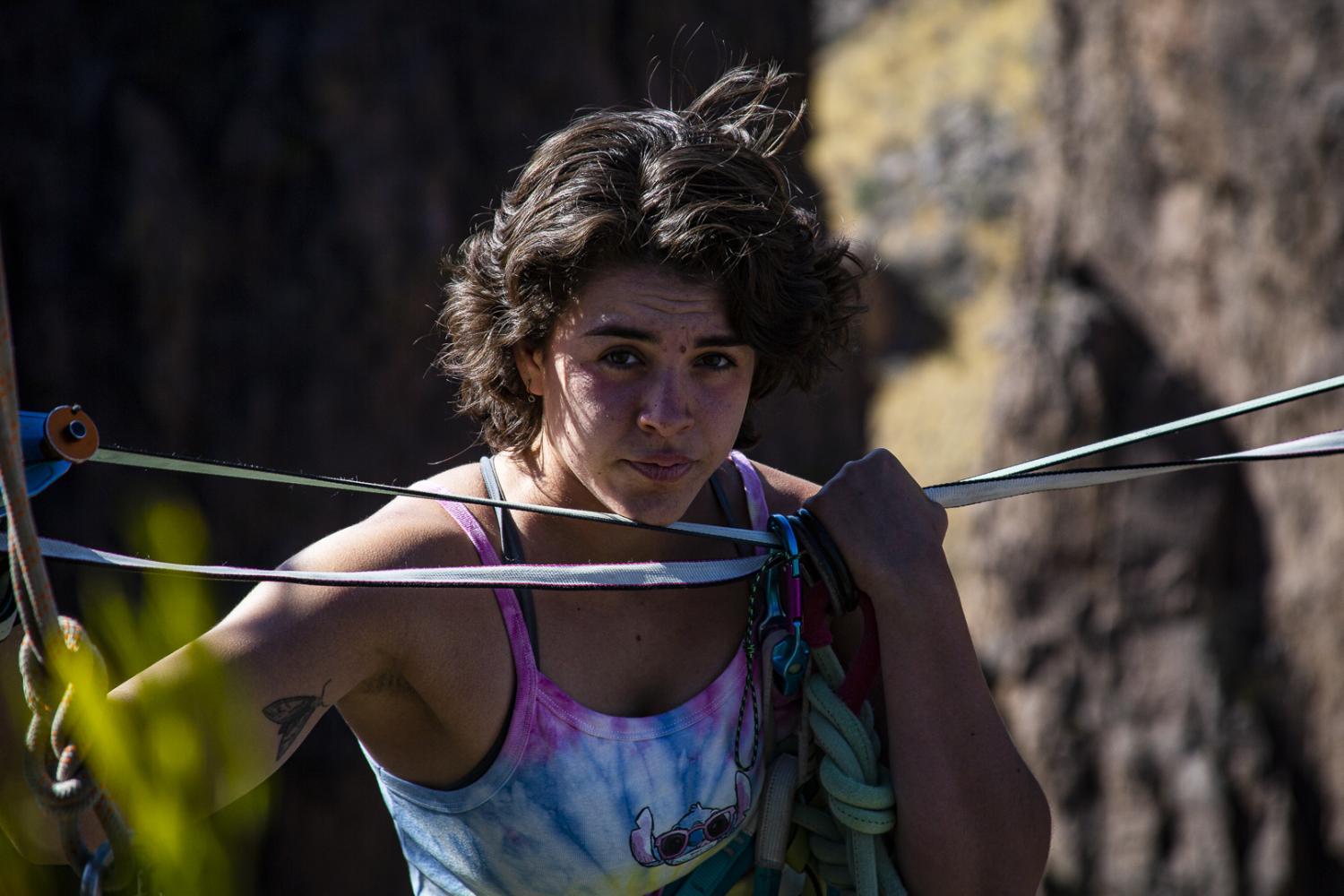 Murphy Woodhouse/KJZZ
Argelia Gil Samaniego has been practicing highline for a couple years, but the Cruz del Diablo was by far her most ambitious effort yet.

“I’m going in with expectations, but also without expectations,” she said, adding that, whatever happens, “I feel strong, I’ve been training, and more than anything my mind is calm.”

Plan set, the group made its way up the winding mountain road to the canyon. At a popular canyon overlook some 2,000 feet above the valley floor, they gear up for the long day ahead. Abraham Puigferrat will be the day’s archer.

He was wrapping a thin fishing line around a short length of pipe, like a fishing reel, so that “when we shoot the arrow it unspools on its own without tangling.”

Puigferrat is new to highline, and much more experienced Osmar Gonzalez — known as Pajarito, or little bird — accompanied him to his perch. Pajarito said he likes to think of the Devil’s Cross as Sonora’s highline university.

Breath stilled, and anchored to a tree to get as close as possible to the edge, Puigferrat pulled the arrow back, and raised the bow. The string snapped, and the makeshift reel worked like a charm. Shouts from the other started as the arrow flew, and erupted when it landed successfully on the other side.

But much work remained. With the thin line across, a thicker one followed, and then — with three teams split up around the canyon — a slow, carefully choreographed effort to move gear over the abyss. A moment’s carelessness could undo hours of tedious work. With shouts, whistles and cross-canyon phone calls, they coordinated.

Knots and other complications frustrate, but they work together to keep stress in check.

“The fastest way is calmly,” seasoned highliner Alejandro Symonds counseled in his distinctive, deep near whisper.

Nearly three hours after firing the arrow, they were finally ready to send the line they’d be walking. And then — lined up behind it and leaning back hard on repeated counts of three — they pulled it taut. With the light fading, they similarly wrapped up the third and final line over the canyon’s mouth.

With a Bob Marley anthem echoing between the walls, and headlamps and a near full moon now the only light, Pajarito, the last of the northside team, pulled himself across the yawning blackness to his waiting friends, many belting out the famed chorus, ‘Don’t you worry ‘bout at a thing.” 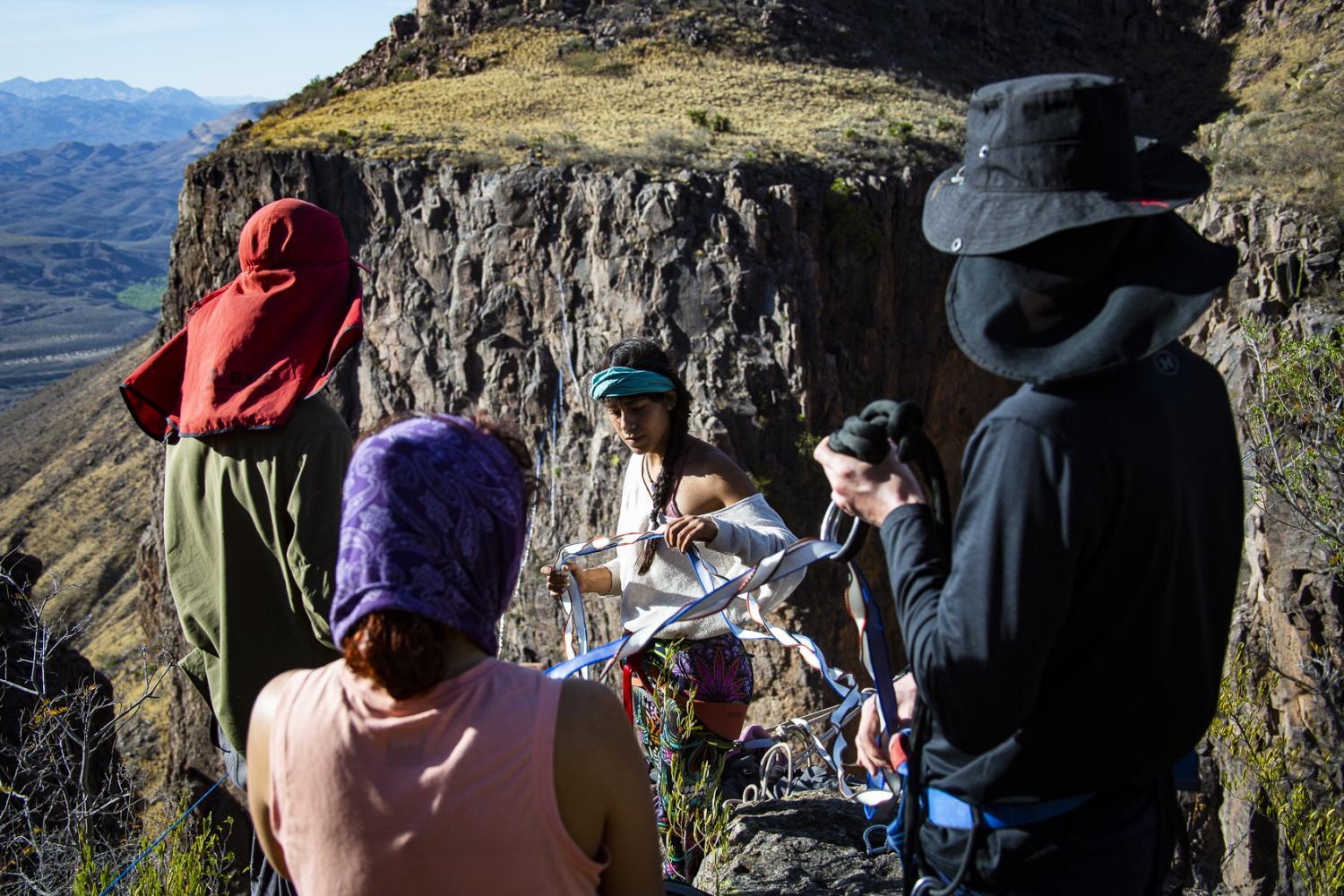 Murphy Woodhouse/KJZZ
Setting up the highlines was a massive, two-day team effort.

'Do you really want to be here?'

Back down at camp the next morning, Pajarito said that the combination of vast, geographically diverse Sonora and such a young sport means that highlining has a lot of potential here, and room to grow.

“We’re really only humming a song that we could eventually sing,” he said.

From the ocean to the high pine forests, there are many promising sites, but the Devil’s Cross figures prominently in Sonora’s highline world, he said.

But its height, and shifting winds, are a profound challenge even for the most experienced, and force tough questions.

Far from either edge on the canyon mouth line later that afternoon, Luis Flores lost his balance and plummeted before his safety rope caught him. Dangling hundreds of feet above the canyon floor, he gathered himself and climbed back up onto the line.

To keep his focus, he sang a banda song to himself.

And soon was back on solid ground. The shock of the experience was still with him after several minutes of cooling down, but so too was the euphoria.

“You have to let it flow,” he said. “You’re there because you like it, but at the same time it terrifies you. You enjoy it, but you suffer.”

He recounted watching the wind rattle the line as he was walking.

“I think that up there you feel alive so close to death,” he added, while also emphasizing the lengths they go to to prevent mishaps. 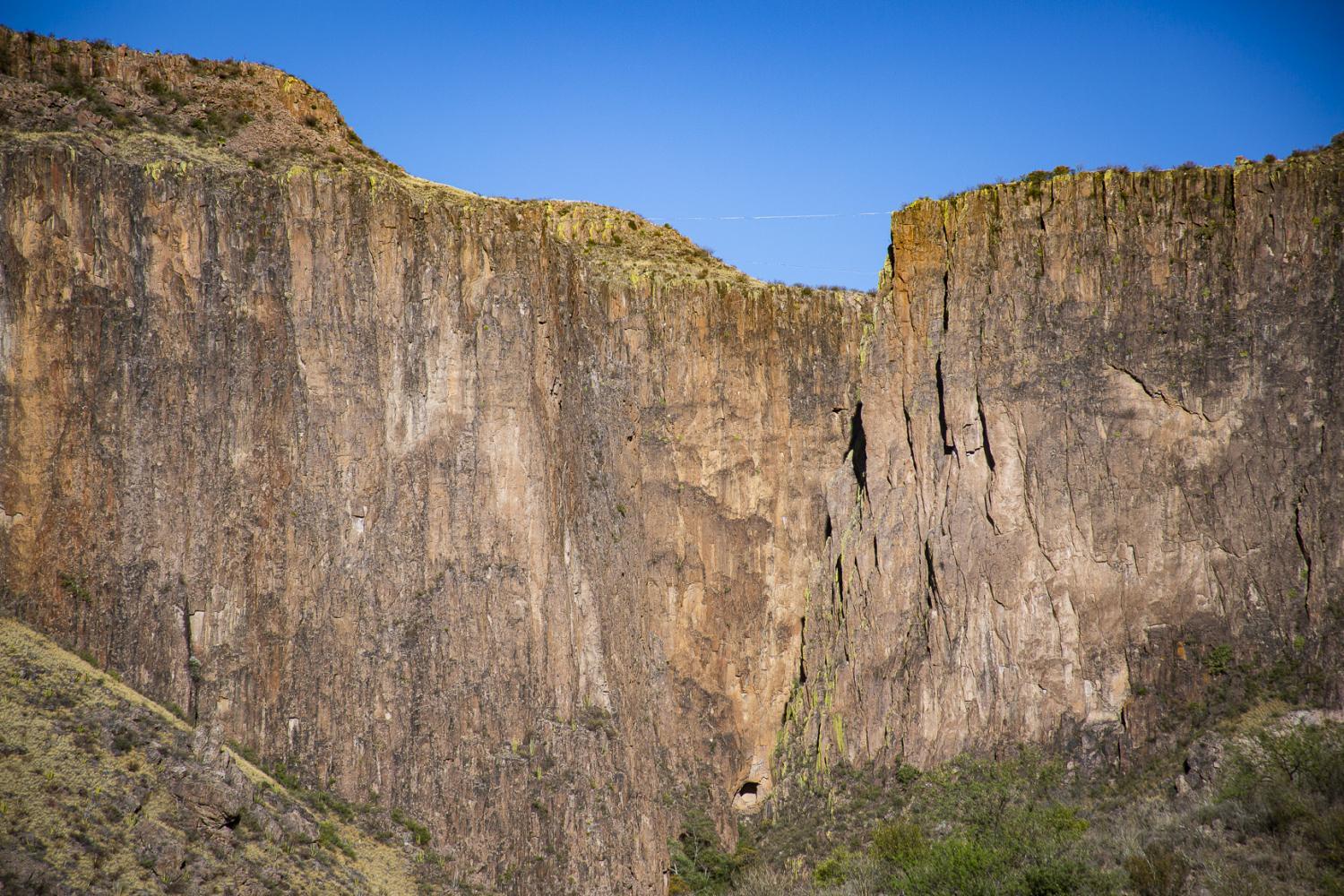 Murphy Woodhouse/KJZZ
The Cruz del Diablo seen from below.

On a nearby line, with more air directly below her than she had ever before experienced, Gil Samaniego, the biology student, was finding her equilibrium. Her friends shouted encouragement from the edge, and then helped her back.

More powerful than the fear were the views, and the sense of balance and peace she found.

"On the line, you're flying," she said. “The world is yours up there." 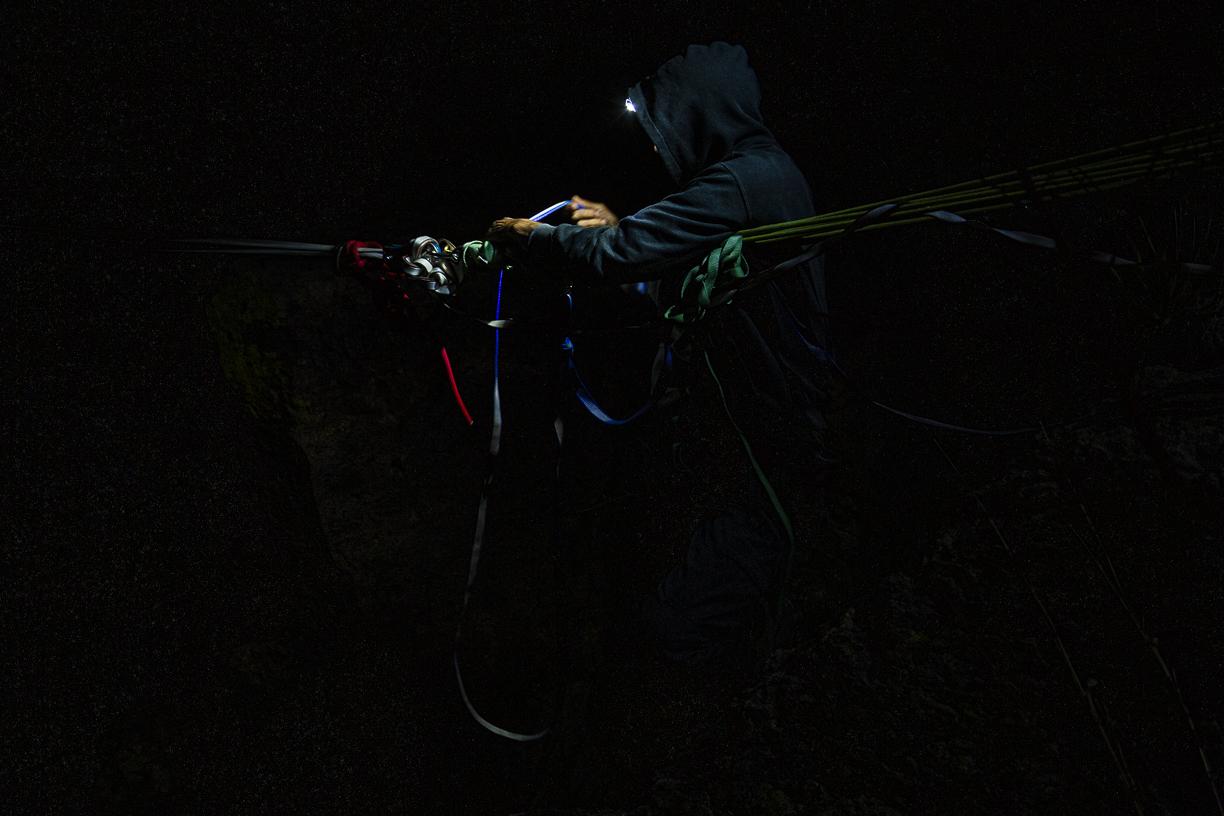 Murphy Woodhouse/KJZZ
Prepping the highlines took two full days of work, and dragged into the night. 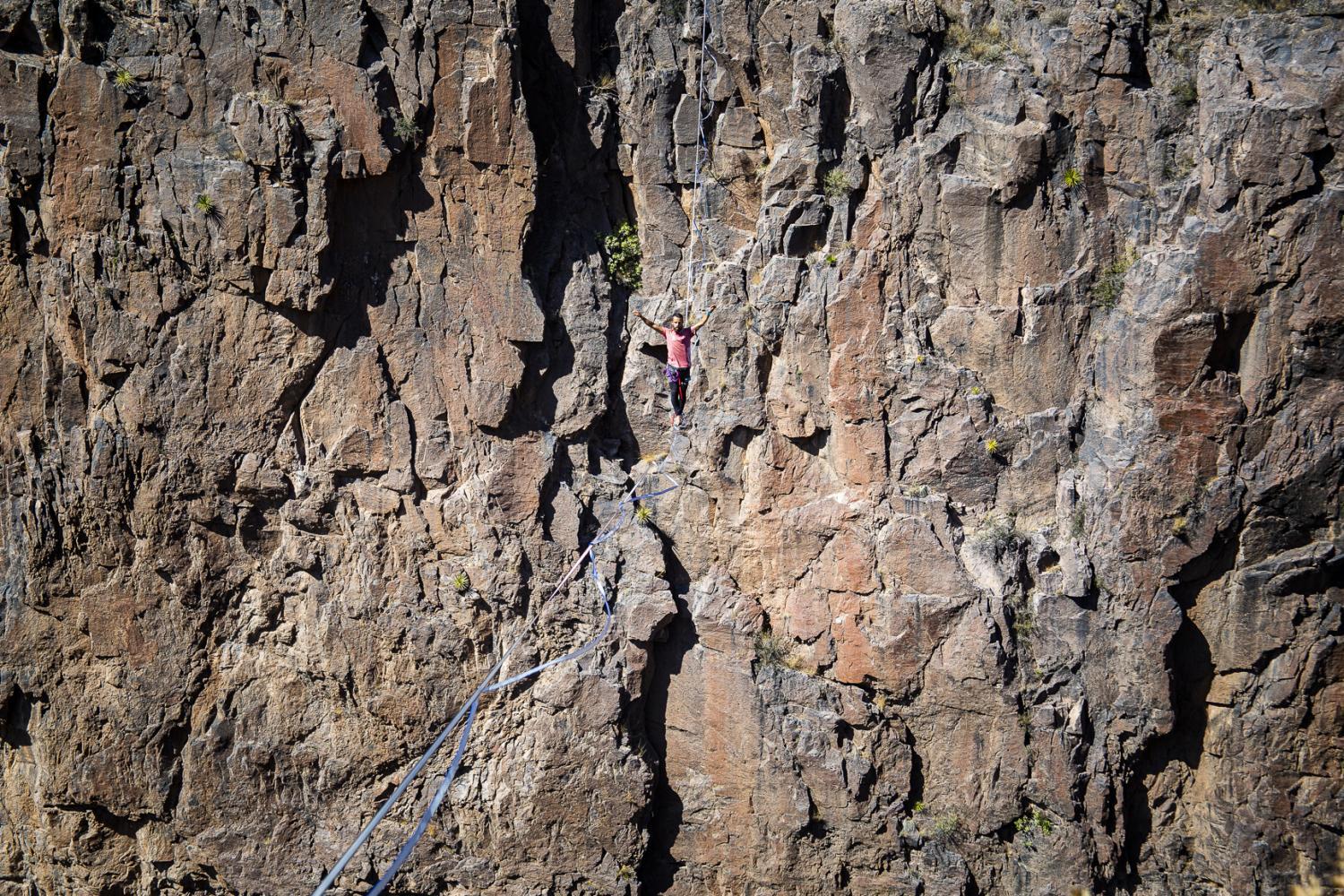