See what’s coming down, going up at former Metrocenter Mall in Phoenix 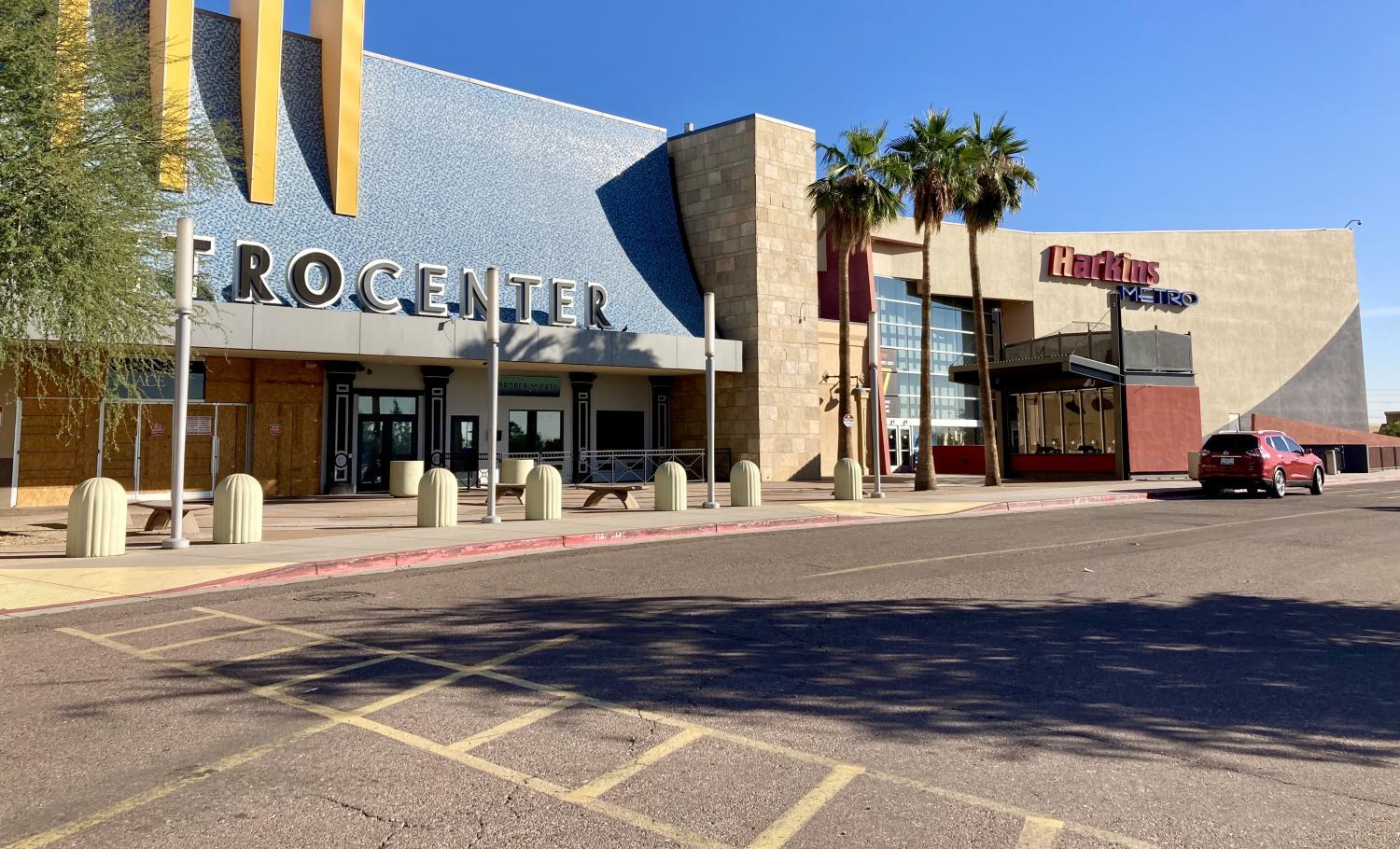 Christina Estes/KJZZ
Chris Anderson with Hines said the development team is working with Harkins Theatres to upgrade the complex at the site.

Plans for the former Metrocenter Mall in Phoenix have grown since KJZZ first reported the deal last December.

During a community meeting Monday night, organized by Councilwoman Ann O’Brien, the development team shared its latest vision for the landmark property off Interstate 17 between Dunlap and Peoria avenues that closed in June 2020.

Estanislao Hurtado III, a father of five, who lives about a mile and a half from Metrocenter wasn’t sure what to expect. Like others in the audience, he's witnessed questionable, sometimes criminal, activity in the area.

“I want to see this community to be improved and for all families to feel welcomed and to feel safe,” Hurtado said.

Dozens of people filled a meeting room at the Doubletree Hotel to hear Chris Anderson with Hines lay out the plans. Multifamily housing surrounding a pedestrian-oriented town center with shops, restaurants and a park. The first phase will include 600 apartments, which Anderson said would not be considered “affordable” or “workforce.” He called them “attainable.”

“We realize the demographic that’s here, and we’re not trying to displace people out of this demographic, out of this neighborhood. We want people that are coming in, that are going to add to it, not completely transform it, you know, into a way that you can’t afford to live here anymore,” he said.

Several residents questioned whether such a large project would lead to more crime.

Anderson said the town center will include what they call a "cop in a box," “which is basically — in the retail space, we actually build them space so that they can go there, they keep their police cruisers, they can park there, they have a space where they are welcome and can be here and that alone a lot of times just deters crime.”

Garcia-Fellenz likes the focus on urban living with green space.

Light rail will be running there in 2024 and late that year or early 2025, the first phase should be completed. The 80-acre site is expected to be fully built by 2029, with 3,200 housing units and close to 400,000  square feet of retail, restaurants, services and offices.

Getting there means tearing down almost everything — the currently open Dillard’s Clearance Center, and the former Sears and Macy’s. The only businesses that will avoid wrecking ball are the nearby Walmart Supercenter, Life Storage and possibly Harkins Theatres. 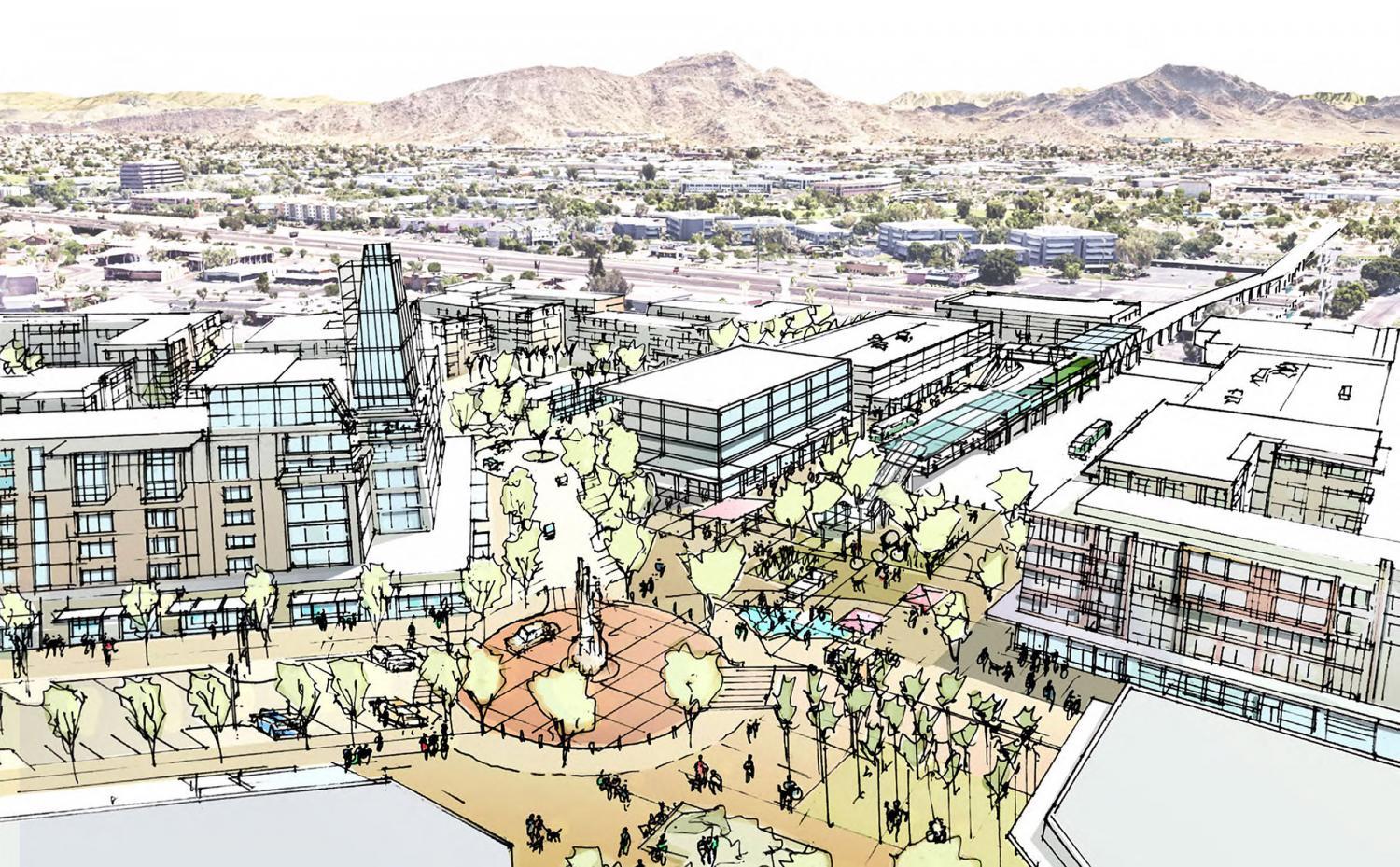 Hines
Preliminary sketch of the redevelopment at the former Metrocenter Mall site.

“In talking with the Harkins people, they really want to create that as one of their newer concepts that’ll have a restaurant in there, have new state-of-the-art theaters and really it’ll kind of spill out into the park area there,” Anderson said.

The City Council is expected to approve bonds to build public parking, just as it did for the redevelopment of Park Central Mall in midtown. In the case of Metrocenter, the garages will be smaller and spread out to best serve residents, visitors, and light rail park-and-ride users.

In 2014, Phoenix leaders designated the mall as a redevelopment area and in 2016, the council approved a zoning change to allow mixed-use development.

Until developer number 25 showed up. Mackay said after talking with Steve Sirang, chairman of Concord Wilshire, she knew his company, Hines and TLG Investment Partners, could pull it off. Estanislao Hurtado thinks so, too.

"When you have a gem like Metrocenter which has so much of a history and you’re trying to bring it up again ... to me it’s exciting."
— Estanislao Hurtado III, Phoenix resident

“When you have a gem like Metrocenter which has so much of a history and you’re trying to bring it up again, like a phoenix, like the city of Phoenix, like the  phoenix that comes out of the ashes, to me it’s exciting,” he said.

Forty-nine years after Metrocenter Mall opened, its escalators and skylights will come crashing down this fall. But the developers have promised to incorporate Metrocenter’s history in the project and preserve the mall’s memories as they create new ones.

According to a city report, at full build-out, the project will represent a total capital investment of $935.9 million. 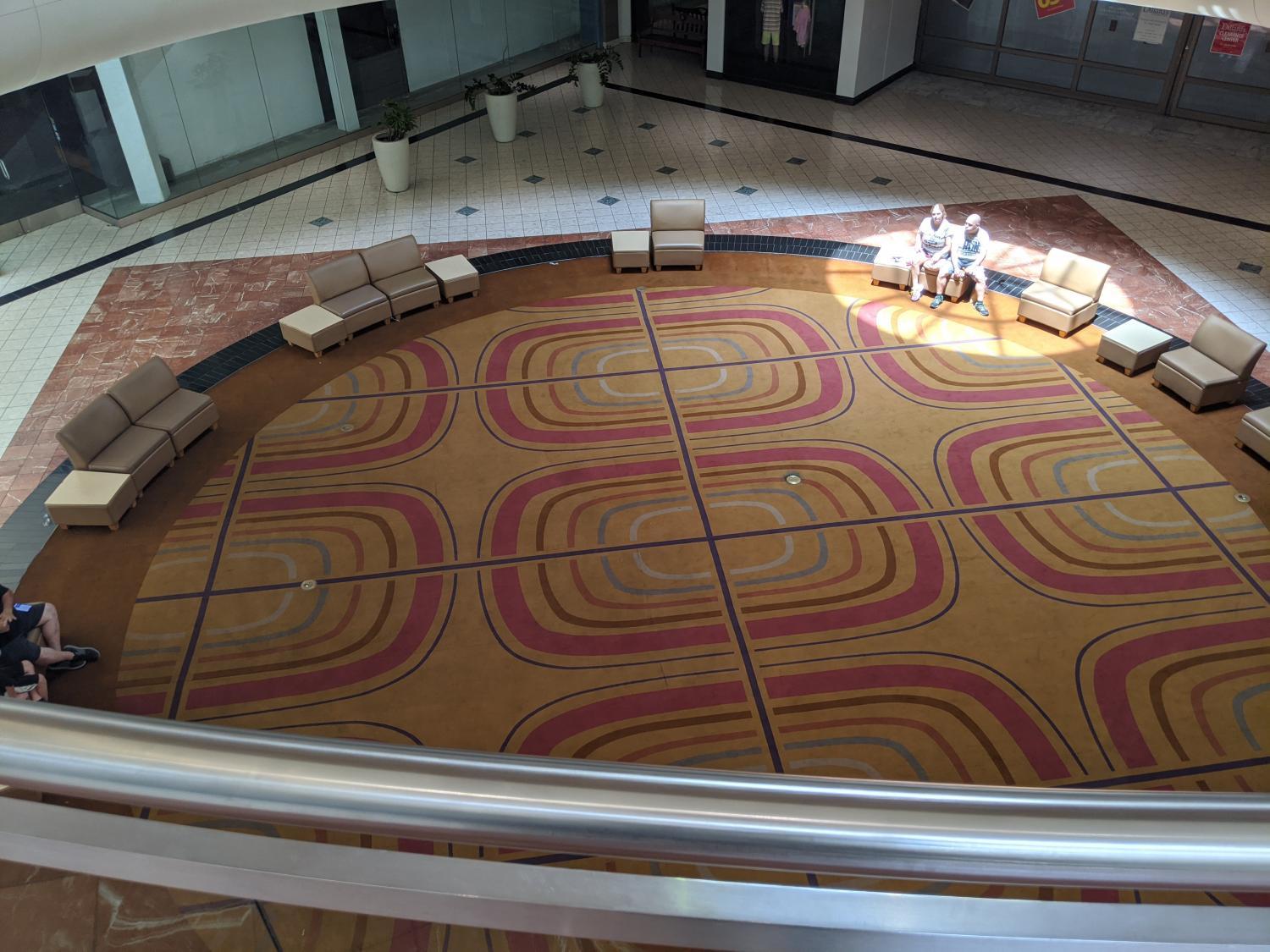