In The Midst Of Drought, Farms Spring Up In Northern Arizona 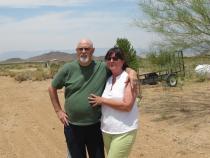 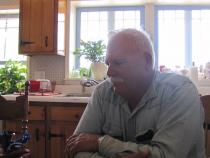 (Photo by Will Stone - KJZZ)
Rancher Emmett Sturgill is happy to see the agricultural community growing near Kingman.

When Wayne and Glenda Erwin retired to a quiet, barren corner of the Mojave Desert, farming wasn’t on their minds. Mostly it was stargazing and protecting their schnauzers from rattlesnakes.

“They know to keep their distance whenever there’s an encounter," said Erwin, as he walks down to the edge of his property and points to their small wellhouse.

Like most people living in this sparsely populated area, just north of Kingman, the Erwins depend on groundwater. But recently the demand for that underground resource has shot up.

“You can see some green down there, which is alfalfa, I suspect," said Erwin. "That’s where we first started noticing the well drilling.”

On the horizon, you just can make out tractors peeling through clouds of dust.

Red Lake Valley does not exactly strike you as the land of plenty. But in the last couple years, thousands of acres have turned into farmland and dozens of large-scale agricultural wells have sprung up.

All that pumping is making people around here very nervous.

“Whoever’s got that water," said Erwin. "They control our destiny here, they really do.”

Look at California’s Central Valley, Erwin said, where aquifers are drying up due to generations of pumping. That is not the story here in Kingman, though. Historically, farming never took off, mainly because pulling water out of the ground was cost prohibitive.

But times change. With the historic drought in nearby California and the high price of commodity crops, investors are casting their sights elsewhere.

“The water table level is going to drop," said Mohave County Supervisor Buster Johnson, "There’s just no doubt about that.”

Johnson said the surge in agriculture in the county, particularily near Red Lake and Golden valleys, is jeopardizing the economy of this already water-scarce region. If the pumping continues, Johnson believes businesses will be reluctant to locate in the county.

“It’s their right [the farms] to take the water," he said. "If it works out as a model plan for them, a business plan that they can make money [off of], they can pull the water."

"When it runs out they can go back, or go on to the next place,” said Johnson.

Unlike Phoenix or Tucson where groundwater is regulated, most of rural Arizona is basically the Wild West, with no such restrictions on how much groundwater can be pumped. The city of Kingman depends on the same aquifers as these farms. Some experts estimate the city could run out of water in as soon as 50 years. According to the U.S. Geological Survey, the aquifer underlying Red Lake Valley is already being overdrafted, meaning water is being sucked out faster than it is being recharged.

So who are these farmers?

Mostly out-of-state investors, among them Bob Saul. He is with Wood Creek Capital, a Connecticut-based investment manager.

At a public meeting earlier this year, he told county supervisors and residents that he "represents a group of investors, mostly public pension funds."

Saul said he has closely studied the aquifers and disagrees with the doom and gloom projections. The untouched soil has vast potential for all sorts of crops, he said, mostly to feed the ever-hungry California dairy industry.

"When you are investing for institutions, you really have to use best practices," said Saul. "We are not in the business of trying to jeopardize anybody’s aquifer or their land base.”

Saul estimates their operation, Stockton Hill Farms, will consume about 60,000 to 70,000 acre feet a year, but said the rate of recharge in the aquifer is much better than some have characterized it to be.

Saul called this “the most exciting farmland project” in the country and said their whole enterprise relies on growing “sustainably,” not how it’s been done in much of California.

And he’s not the only one getting in on the action.

A Las Vegas developer, Jim Rhodes, is also farming huge tracts of land. He had originally intended to erect a massive housing development in the area, but eventually ditched that idea and decided to pursue agriculture, instead.

Rhodes owns a stake in Stockton Hill Farms, but also has his own operation, known as Kingman Farms. Rhodes could not be reached for comment.

Despite opposition from some local residents and elected officals, not everyone in Mohave County is against the farm.

“The alternative, in my view, would be houses, and house tops, and dogs, and four wheelers, and people cutting my fences,” said Sturgill.

Sturgill has heard all the rumors — fears the aquifer will go dry, that this is a covert attempt to seize the water or send it to Vegas — but that does not jibe with what he has seen so far.

“It looks to me like they’re trying to put farms together and sell the farms to other farmers to make money,” he said.

Sturgill is not going to worry about the water — that is, unless his wells start going dry.