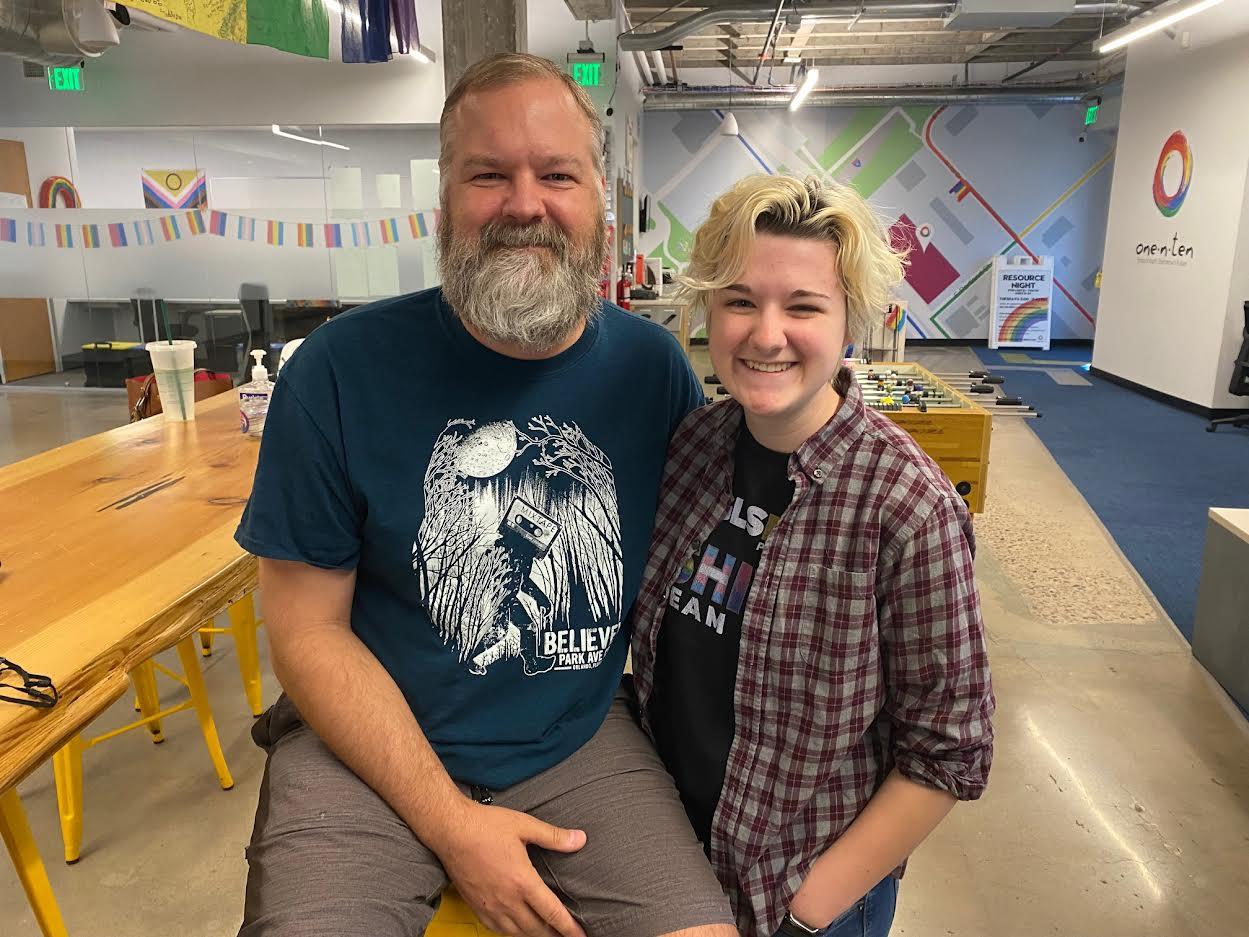 Kathy Ritchie/KJZZ
Steven and Rayne Duncan at the One-n-ten youth center in Phoenix.

For some trans youth and their parents, this law is a prime example of government overreach. It could also lead to an increase in poor mental health outcomes or, worse, self-harm.

Rayne Duncan is sitting in the music room at One-n-ten’s youth center in downtown Phoenix. It’s a safe space where LGBTQ youth can hang out after school.

Seventeen-year-old Rayne is a book-loving, activist-in-the-making, who uses they/them pronouns.

"I just came home from my senior trip. And this is one of the first things ... I think, 'Jesus Christ, why?'"

Rayne is talking about when they first learned that Gov. Ducey had signed Senate Bill 1138 into law, which bans all gender-affirming surgery until the age of 18. However, it does not ban puberty blockers or other gender-affirming hormone therapy.

Rayne came out as nonbinary their freshman year of high school, but was assigned female at birth.

"I always, at some level, knew that I wasn't a girl. I just didn't know how to express it," they said. "I think I've always felt that way. It was just hard to put a word on it because I knew I wasn't a dude."

When Rayne entered puberty and started developing breasts, they said they was very upset.

"Being trans and having these parts of your body, it feels like invasion," said Rayne. "It is something that everything in your brain tells you should not be there."

Rayne plans to have top surgery, or the removal or augmentation of breast tissue,  when they turn 18 this summer. 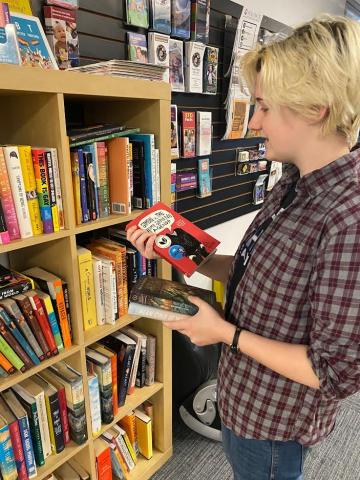 Kathy Ritchie/KJZZ
Rayne Duncan loves books. They're checking out some of the books at the One-n-ten Youth Center in downtown Phoenix.

"I think we knew early on that Rayne wasn't your normal everyday kid," Duncan said.

Rayne says their parents knew they were queer, but trans — that snuck up on them.

"It was a big learning process to understand," said Duncan. "To do the reading and really focus on what Rayne was going through and how we could help them on their journey to being a great human being."

And Duncan supports his child’s decision to remove their breasts, and doesn’t think it’s up to Arizona lawmakers to legislate Rayne’s health care.

"They want less government, and they want less [interference] between the parents and child, yet they still pick and choose who those rules go to.

So, how does Rayne feel?

"Lawmakers in this country have always talked about protecting kids until it's not their kids," they said.

Ducey called SB 1138 “common sense” legislation, adding that gender-affirming surgery “is a decision that will dramatically affect the rest of an individual’s life, including the ability of that individual to become a biological parent later in life.”

"Just bigger picture, that’s one of the key elements of the debate around bottom surgery or surgery on one's genitals, is that potentially some of those surgeries can be a sterilizing procedure, said Dr. Jason Rafferty. He’s the lead author of the American Academy of Pediatrics’ 2018 policy statement, which endorses gender-affirming care.

"Lawmakers in this country have always talked about protecting kids until it's not their kids."
— Rayne Duncan, 17

"So, I think that's something that is continuing to be played out and debated among ethicists in terms of coming out with the next edition of WPATH (World Professional Association for Transgender Health), which hopefully will be coming out soon," Rafferty said.

But, Rafferty says, that’s not the case with top surgery, which does not lead to any irreversible infertility. He also says that while surgery is typically reserved for those 18 and older, there are exceptions: "there have been times in 16- and 17-year-olds where they're ready to move forward [with surgery] and everybody is in agreement that it's the best thing for that child."

But a law like 1138 makes it impossible to address individual health care needs. And in some cases, it can be a matter of life or death.

Janice Hennessy's son Daniel was assigned female at birth. She says surgery was absolutely necessary for her child to not only survive but to thrive.

When Daniel entered puberty, their dysphoria became so unbearable they contemplated suicide more than once. Dysphoria can occur when a person’s gender identity collides with their sex assigned at birth and causes profound distress.

Daniel was approved for top surgery when they were 16. 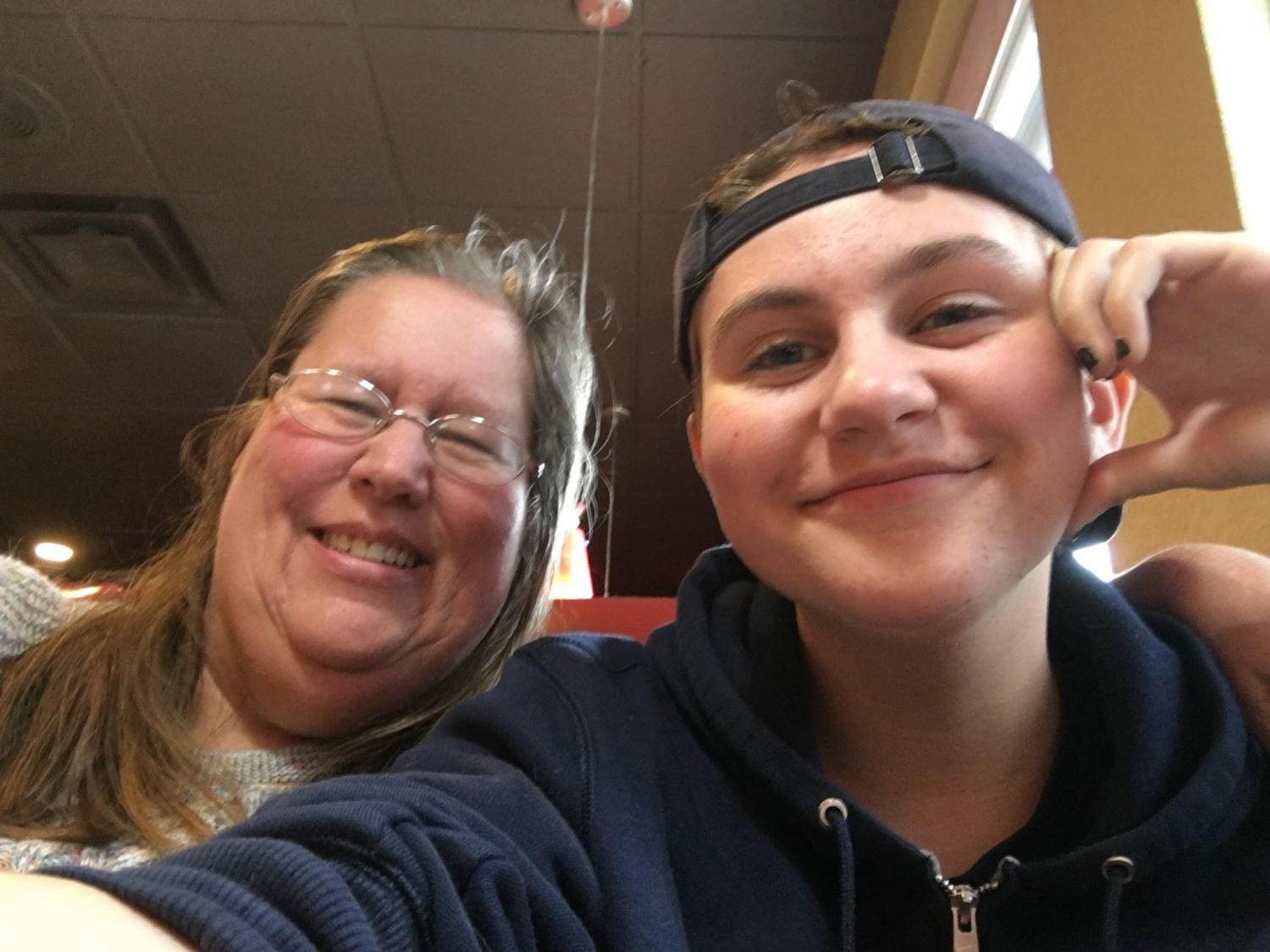 Janice Hennessy
Janice Hennessy with her child, Daniel. Hennessy says Daniel struggled with dysphoria. They eventually went to Chicago for top surgery, which is the removal or augmentation of breast tissue.

"But unfortunately, because of an Arizona law, he was unable to get his surgery," she said.

Daniel was on AHCCCS, Arizona’s Medicaid program. So, the family filed suit.

"But about two and a half years into that litigation, it was determined that his mental health was deteriorating to the point that we had to pursue another avenue," she explained. "We did end up having to go to Chicago for his surgery."

According to the Trevor Project’s National Survey on LGBTQ Youth Mental Health, 42% of youth have considered suicide in the past year, including more than half of transgender and nonbinary youth. Hennessy was not about to let her child become a statistic, so for her and other parents like her, the choice is pretty clear.