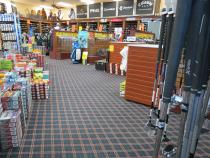 (Photo by Annika Cline-KJZZ)
Van's Golf Shop down the street from the Phoenix Open is happy to have the extra business. 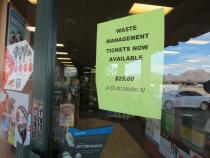 (Photo by Annika Cline-KJZZ)
Van's Golf Shop gets in on the action by selling discount tickets to the Phoenix Open.

The Phoenix Open is in its second round on Friday, with more events this weekend. The annual event draws in hundreds of thousands of visitors each year, making North Scottsdale a high-traffic mess for the weekend, but for many businesses, that traffic translates to more customers.

Van’s Golf Shop is just down the street from the TPC Scottsdale, where the crowds are standing on the grass, right off the Loop 101 where many cars turn off to find a parking spot for the event. Vice President of Operations Ricky Levy said the location is ideal.

“We get a wide range of people from all over the country that come in and know that we sell tickets. We sell them for five dollars less than you can purchase them at the gate," said Levy.

And Levy said it is the tickets that really make a difference in sales during the Phoenix Open weekend. Usually ticket sales are about the same each year, but...

Levy attributes this spike to the good weather. He said last year the rain likely drove away some spectators.

Wayne Harrison stands in a parking lot waiting to be shuttled to the course. He is visiting the Valley from Vancouver, Wash. The last time he attended the open was five years ago, and he and his wife were back for the first round on Thursday, but Harrison has bigger plans.

“I’ll visit a few other golf courses and try and play them instead of just watching people play. Probably have to replenish some balls because I have a tendency to lose a fair number of them," said Harrison.