Mechanical trees could make a dent in climate change 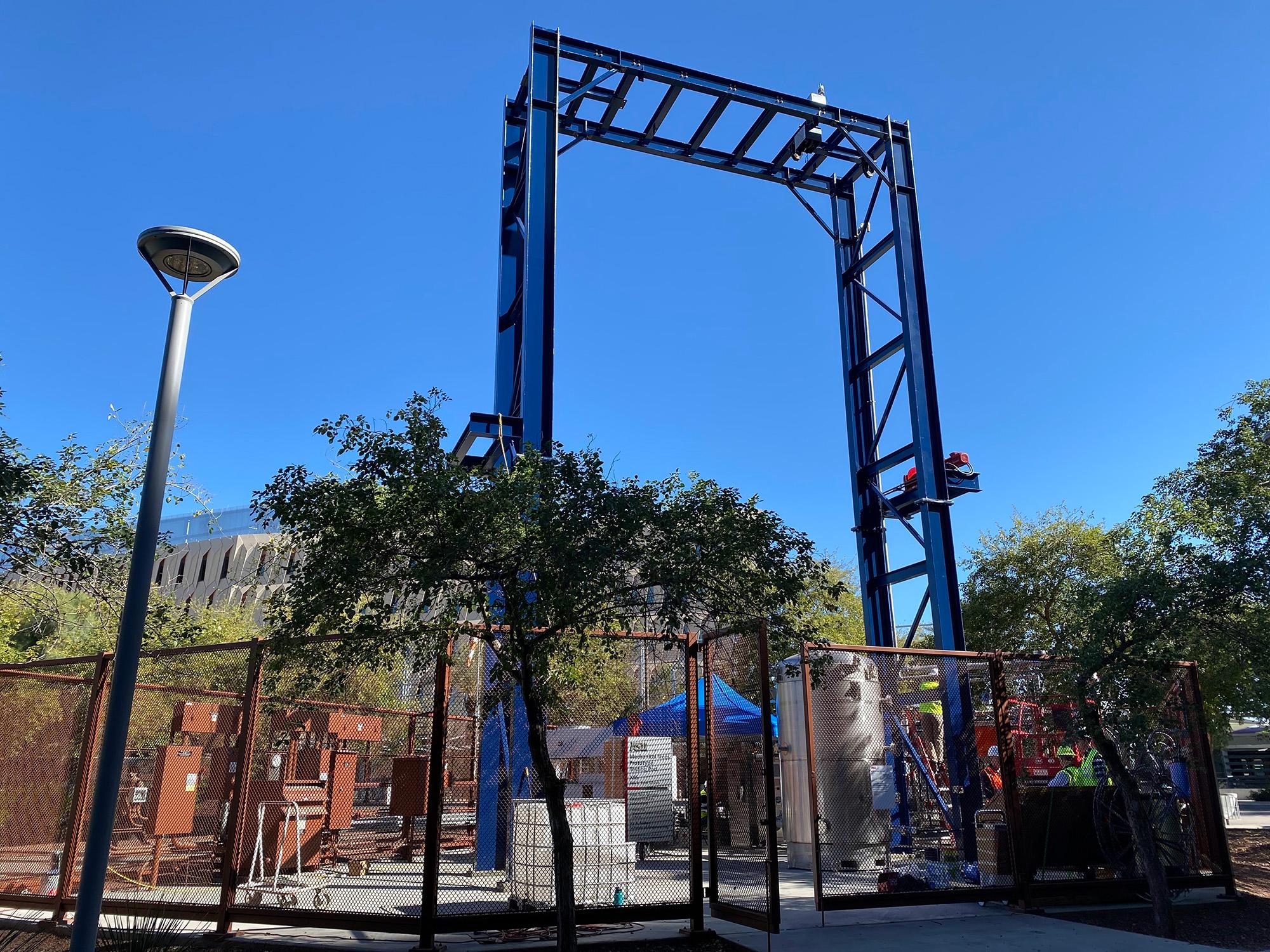 Emma VandenEinde/Cronkite News
A stainless steel drum sits below a blue gantry at Arizona State University in Tempe on March 15, 2022. The drum is filled with 150 discs filled with sorbent that will get pulled into the air like an accordion.

Carbon emissions, which contribute to climate change, are rising. The U.S. Energy information administration found that carbon emissions rose 8% in 2021, and some scientists are worried that we aren’t adapting fast enough to meet this change. A device that looks like a metal tree could help.

It looks like a 10-foot-tall beer keg. But instead of beer, it’s filled with something else.

“Inside of that drum right now is 150 discs … on those discs is the sorbent that captures the CO2. So that’s where the magic happens,” said Travis Johnson. He’s the associate director for Arizona State University’s Center for Negative Carbon Emissions. The magic he’s talking about is removing carbon dioxide from the atmosphere.

“You can see the stainless steel drum there with the lid on top … that gets raised up by the winch up there, up in the air,” Johnson explained. “The lid comes off and the discs are attached to it. So it comes up kind of like an accordion.”

That accordion-like structure is ASU’s latest model to reduce carbon dioxide. That gas is responsible for two-thirds of the temperature increase in our climate, according to the national oceanic and atmospheric association.

Gary Dirks is the chairman for Carbon Collect Limited. Carbon Collect Limited, a renewable energy manufacturer in Dublin, has worked with ASU to create what’s trademarked as the MechanicalTree. It’s based on research done by Klaus Lackner, who directs ASU’s Center for Negative Carbon Emissions.

Dirks says the increase in carbon emissions is not going away.

“The carbon problem in the atmosphere is proving to be a much more difficult problem than I think people expected it to be, and we’re quite literally not making progress at the rate we need to,” Dirks said.

The latest report from the intergovernmental panel on climate change backs this up. It states, the heat caused by carbon emissions are killing crops, trees and fish — all things that help sustain the planet.

Dirks says the trees are one step to help curb emissions.

“We need to stop emitting as fast as we can.” he said. “But in the event we overshoot, then we’re going to need something that can bring it back again.” 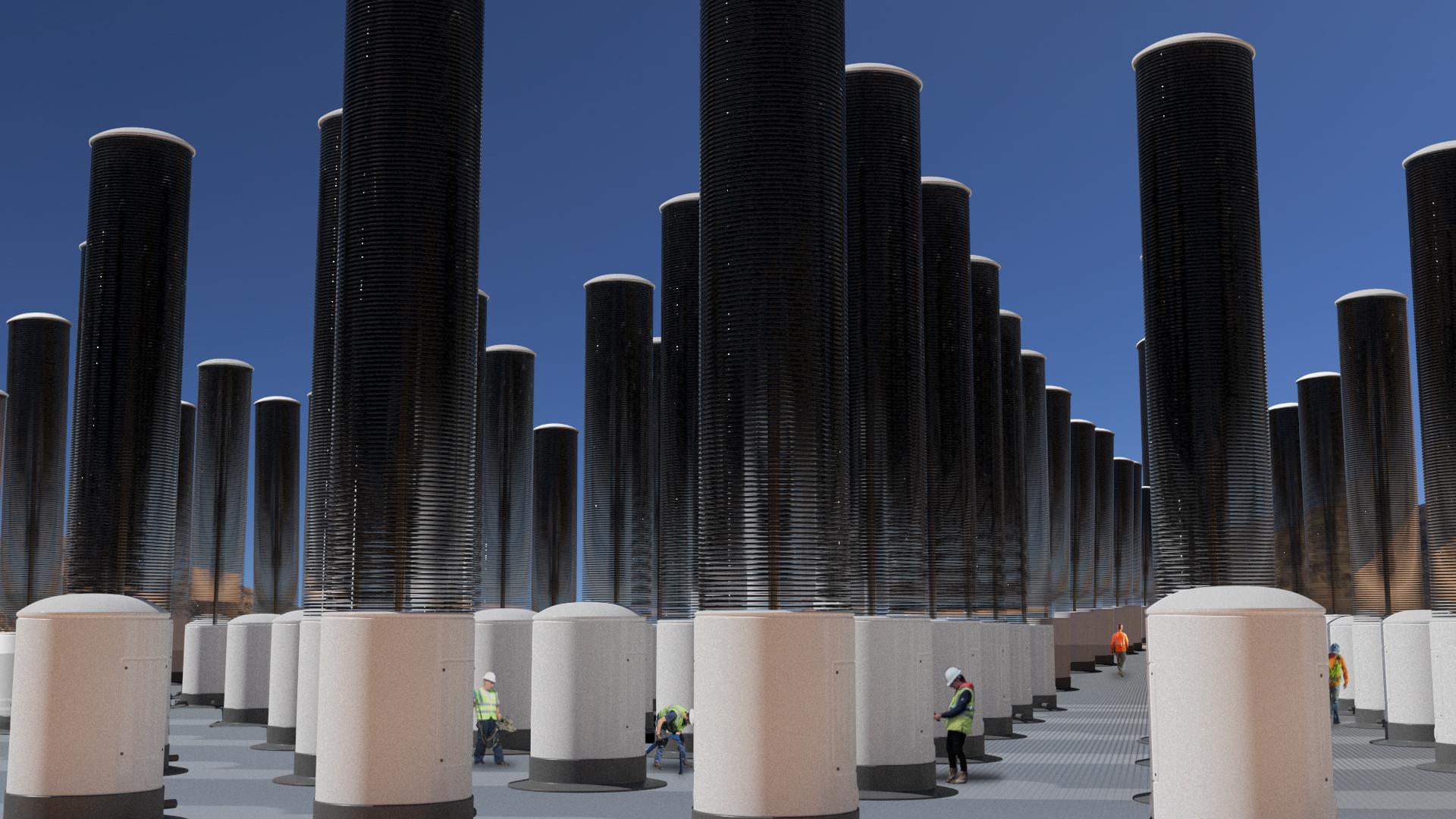 That’s where the rings on the mechanical trees come in. Johnson describes cut-out wedges filled with bags of sorbent.

The sorbent works a lot like a magnet, attracting the carbon dioxide as it passes through the rings. Once it touches the sorbent, it’s absorbed like a sponge and stays there until the rings are lowered back down into the steel drum.

From there, the carbon gets stored underground or repurposed for products, like carbonated beverages.

“The goal is to make sure every little tiny bit of sorbent gets exposed to air every time. That way, we’re maximizing the efficiency and the capacity of the system,” Johnson said.

One mechanical tree is expected to collect roughly 187 pounds of carbon a day. A normal tree only captures 48 pounds in a year.

“It will take millions of trees to make a difference,” he said. “Twelve trees will capture roughly a ton a day. The need for intervention is on the scale of gigatons, meaning billion tons.”

It would take 35 million trees to start reducing gigatons of carbon. A gigaton is the same mass as 200 million elephants. That’s a large number that would take years to achieve.

“Think of car manufacturing,” he said. “We can learn quickly because we’re making them so quickly, so we can inject that new learning into the production and learn quicker and get down the cost curve.”

The effects of the mechanical trees won’t really be seen for years. But for Johnson, their creation is personal.

“I’ve got four little kids and I want to be able to tell them I’ve tried to stop some of the bad consequences you’re having to deal with,” Johnson said.

The mechanical trees team is currently collecting data on their model in Tempe. They expect the tree to be fully operational this month.

If it’s successful, you might see more of these mechanical trees around the Valley in the next couple of years.

EDITOR'S NOTE: This story has been updated to correct that Carbon Collect Limited created the MechanicalTree using research and support done at ASU.