Antibiotic-free meat? Don't be so sure 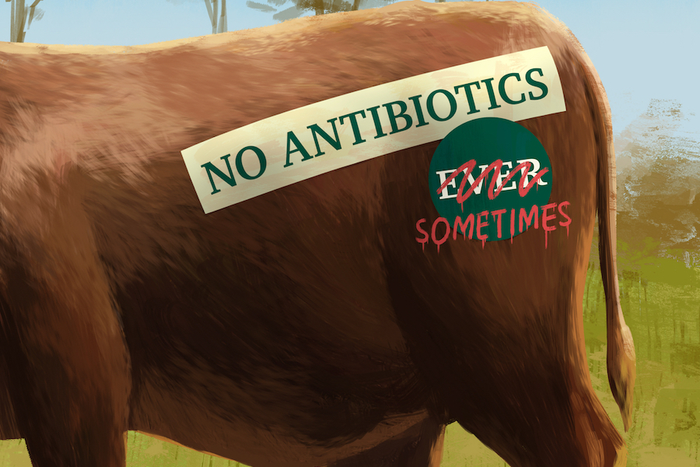 George Washington University.
How confident can shoppers be that they are getting beef products from cattle that have been raised without antibiotics? Not very, according to a study published in Science.

When consumers pony up extra cash for antibiotic-free meat, they rely on labels approved by the U.S. Department of Agriculture to confirm they're getting what they paid for.

But a study published in the journal Science says, "Let the buyer beware."

As long as producers submit documents describing relevant controls and protocols for tracing and segregating RWA animals, along with a signed affidavit describing how the animals were raised in keeping with the label claims, they are free to market their products as RWA.

Labels like "Animal Welfare Certified" and "Organic" also do not require antibiotic testing.

To find out if antibiotic-treated animals were lurking in the RWA herd, researchers from George Washington University in Washington, D.C., and food-testing startup Food In-Depth of San Mateo, California, screened nearly 700 cattle from more than 300 lots for 17 antibiotics commonly included in feed and water.

They found two-fifths of feed yards held at least one animal that had received antibiotics. Lots with positive tests made up 15% of RWA cattle processed at the research site over the seven-month study period.

All of the cattle were part of a "No Antibiotics Ever" program.

Without rigorous checking, cattle handlers have strong reasons to quietly gain antibiotic benefits without incurring their costs. Not only do RWA cattle command a higher price, they also cost more at every stage along the supply chain, so the temptation to treat sick RWA cattle with antibiotics while also keeping them in the fold is strong.

That impulse is strengthened by that fact that the RWA label confers a kind of liability protection upon producers. According to the paper, "The law states and courts confirm that the USDA has sole authority to determine whether meat labels are truthful and accurate. Thus, an approved USDA label cannot be deemed false or misleading by any entity other than the USDA, even when the evidence suggests otherwise."

The authors recommend the USDA remove these incentives by sheltering RWA producers from the financial hardships of removing sick cattle from RWA markets after treating them with antibiotics. They say such a program might receive financial support via a label-user fee.

They also call for tying RWA labels to a rigorous testing and verification system that would re-rout antibiotic-positive cattle to conventional markets and publish positive-testing lots in a public ledger.

The USDA and the interagency National Residue Program do test a small sample of meat animals for antibiotics, but they do so to ensure levels are low enough for safe consumption, not to confirm RWA status.