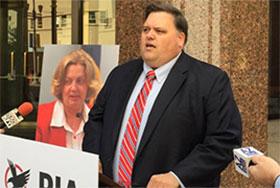 In February, a broad — and bipartisan — coalition of lawmakers, business people and LGBTQ advocates gathered in front of the Arizona state Capitol to announce a new bill that would do something a lot of Arizona cities have already guaranteed: provide constitutional protections for gay and lesbian people here.

Even Republican House Speaker Rusty Bowers was behind the bill, so it might have seemed like something that would pass easily. But early speculation was the measure would be doomed to fail without a majority of the Republican caucus, or 16 House Republicans, in support. And sure enough, Speaker Bowers confirmed that was the case at an ad hoc committee hearing last month.

Tyler Montague says it’s a marathon, not a sprint when it comes to issues like this.

Montague is a Republican consultant in Mesa who worked to get a similar non-discrimination ordinance passed there. He’s also a member of The Church of Jesus Christ of Latter-day Saints, which was in support of the effort both in Mesa and on a statewide level.

The Show spoke with him to learn about his reaction to the doomed statewide effort and his work in Mesa.