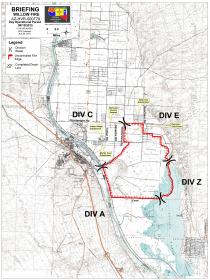 (Photo courtesy of InciWeb)
Map of Willow Fire in Arizona.

The Willow Fire, a brush fire in northwest Arizona, has burned over 6,700 acres. Firefighters said some homes and structures have been destroyed.

The fire broke out about 30 miles southeast of Bullhead City on Saturday morning. The blaze is under investigation, but there was lightning in the area when the fire started.

Delores Garcia with the Bureau of Land Management said Monday fire officials are confident a large portion of the 1,000 evacuated households in the area will soon be able to return home.

“Some of the evacuations will be lifted.  So, at least half of what we’ve got evacuated should be able to return to their homes," Garcia said.

Garcia said there are still 150 homes whose owners will still not be allowed to return.

Hundreds of people have been displaced, and many of those homes held livestock. Buster Johnson is the Mohave County Supervisor from the district three which covers the burning area. He said when it comes to housing livestock, help has come from across state lines.

“People have a lot of animals and people are offering places to keep their horses at. Needles, Calif. Set up an area over there, at their fairgrounds, for animal," said Johnson.

The Western Arizona Humane Society also set up a shelter for smaller animals. Johnson said the outpouring of support from around the region has not gone unnoticed.

A spokesperson for the Bureau of Land Management said the fire became aggressive Saturday due to stiff winds and dense vegetation. Crews built barriers between the blaze and homes and used airplanes to drop retardant.

The Mohave County Sheriff’s Department, along with Mohave County Emergency Management, ordered mandatory evacuations Saturday for half a dozen small communities and subdivisions near the fire on Saturday. About 850 homes were evacuated.

The Red Cross has set up an emergency shelter at an elementary school in the area for several hundred residents who had  to  be evacuated.