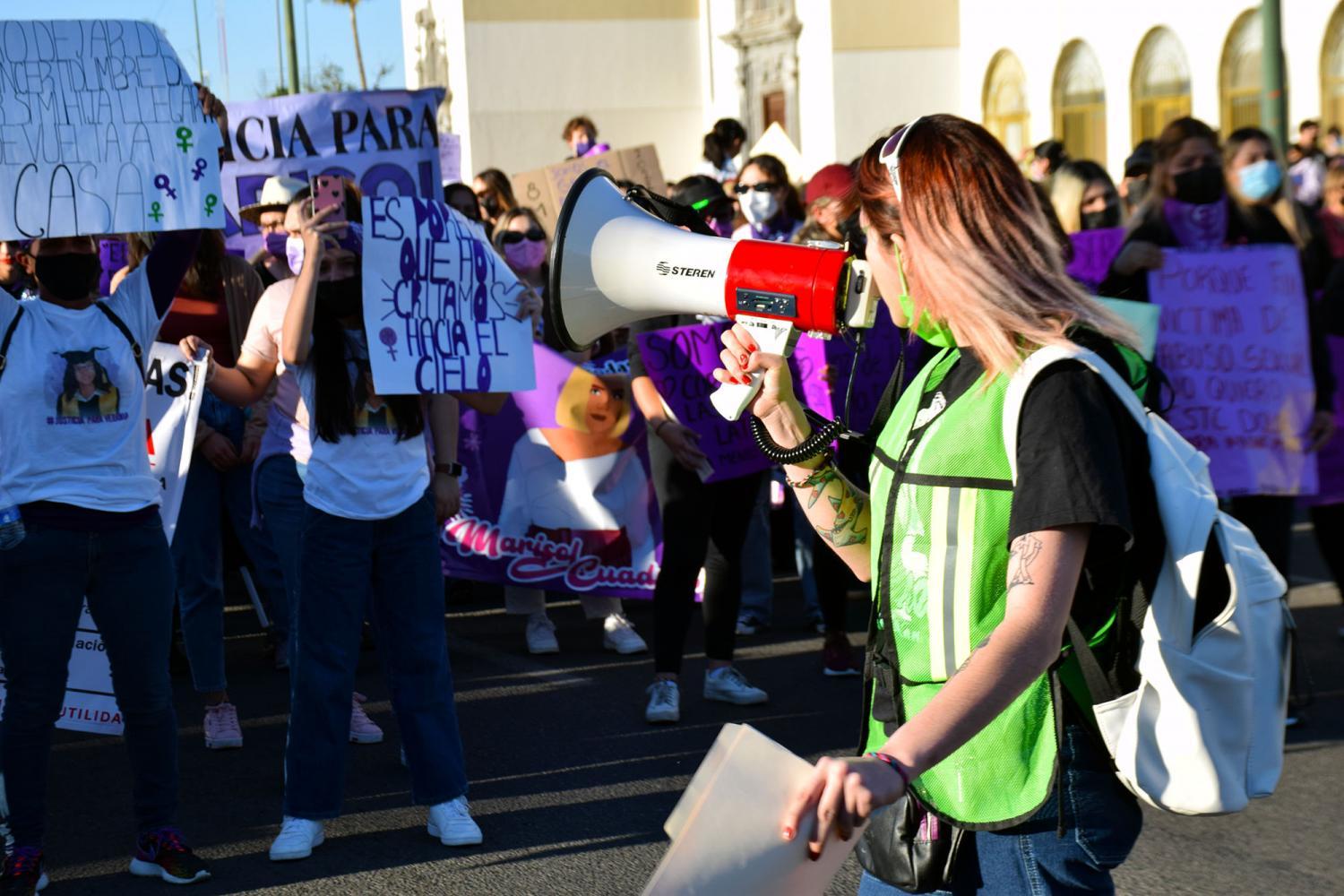 Kendal Blust/KJZZ
One of the march organizers leads women in chants during the March 8, 2022, International Women's Day march in Hermosillo, Sonora.

The children and families of women who have gone missing or been killed in Sonora in recent years led the march through Hermosillo on Tuesday.

The protest has become an annual tradition in Sonora, and across Mexico, with massive and growing marches each March 8, or 8M, calling for an end to inequality, gender-based violence and repressive abortion laws. It's a day feminists insist is not a celebration but a battle cry. A condemnation of the daily violence and injustices women face in their country.

“We can’t keep living with fear,” said 24-year-old Clarisa Camargo, who brought her 13-year-old sister to the march for the first time this year. “Violence is an everyday experience we live with. And we don’t want it to be that way for those who come after us.”

And while marching is an important way to bring awareness to their fight, she said, it's just a small part of the work women are doing to support and protect each other. 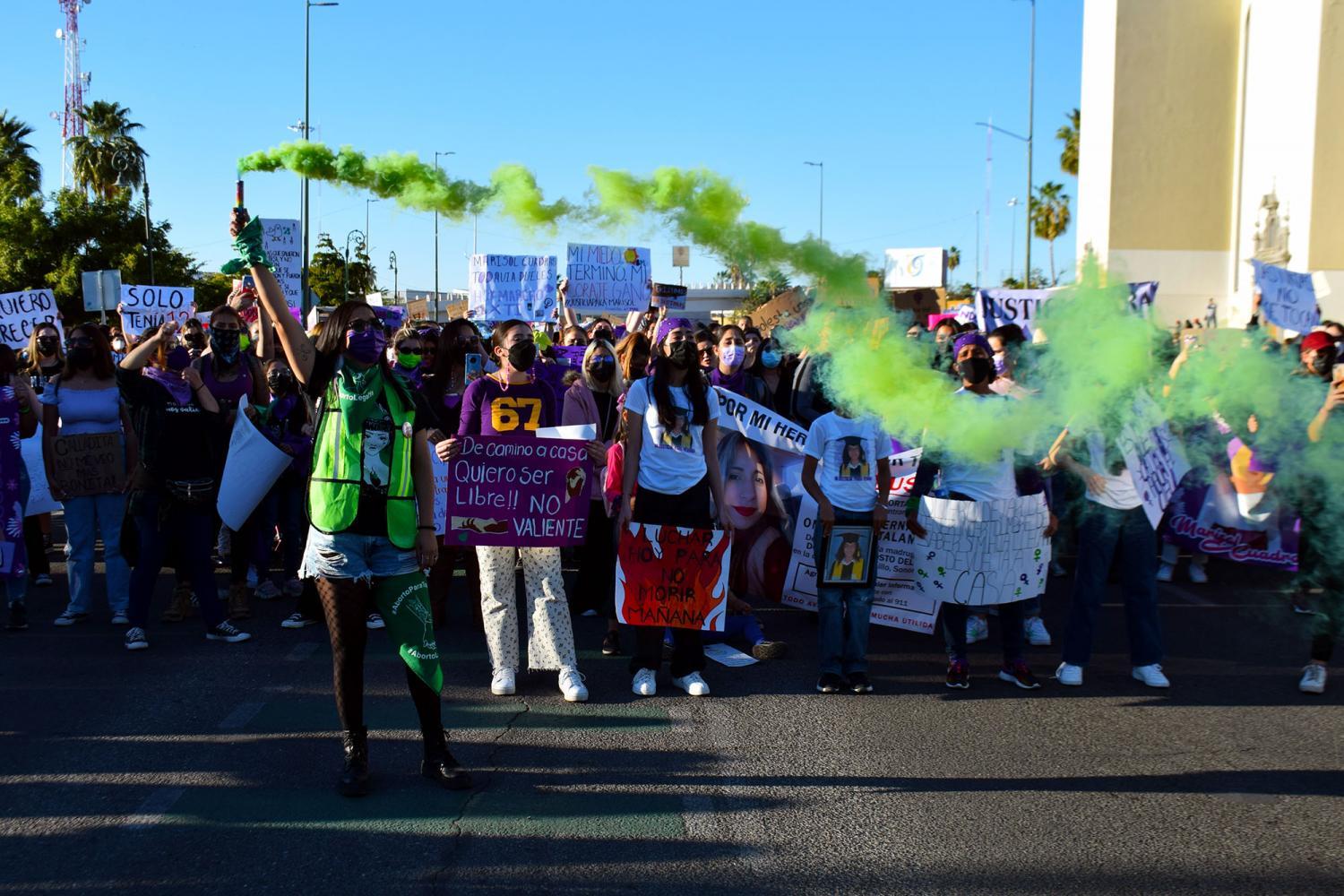 Kendal Blust/KJZZ
An organizer lights gets the crowd's attention as the march is set to begin.

“The grave reality is that we’re not safe anywhere. Not in our private spaces or public spaces,” said Andrea Sanchez. “And the pandemic has shown us that being in our own homes has been a huge threat for many women and girls, who’ve been raped, abused and killed by people in their own families, their own households.” 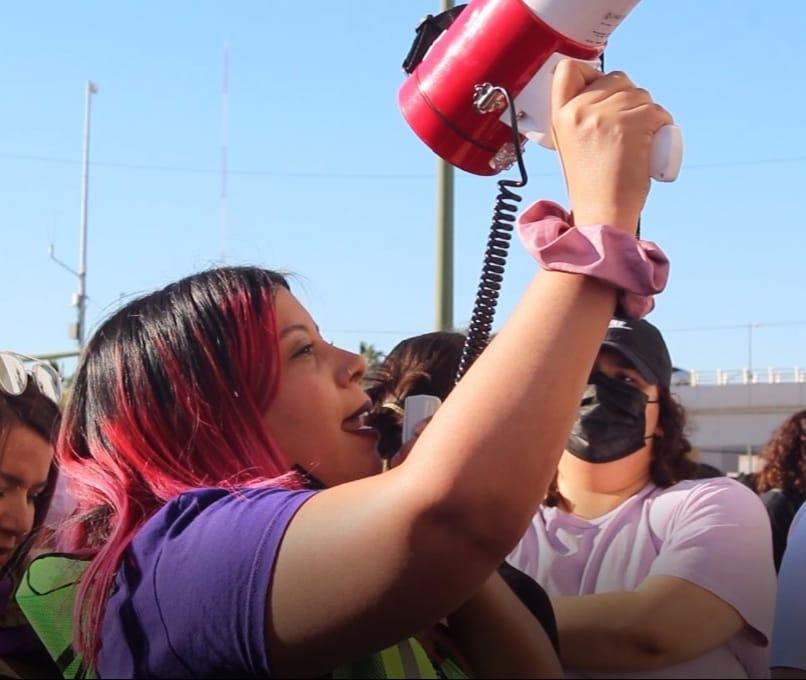 Sanchez is a long-time feminist and helps lead some of the feminist collectives taking on the day-to-day work of combatting gender violence.

Like many others, she joined Sonora’s growing feminist movements because of her own history of violence and abuse.

“We are many, and all the time more and more women. Unfortunately, we’re also more because we are seeing more women coming to us with stories of violence,” she said.

And while most feminists are skeptical of officials statistics, she said, those figures point to the kinds of violence pushing greater numbers of women to join marches and collectives in recent years.

Last year, Mexico reported a record-setting 1,004 femicides — or the murder of a woman because of her gender. Forty-five of those women were killed in Sonora. 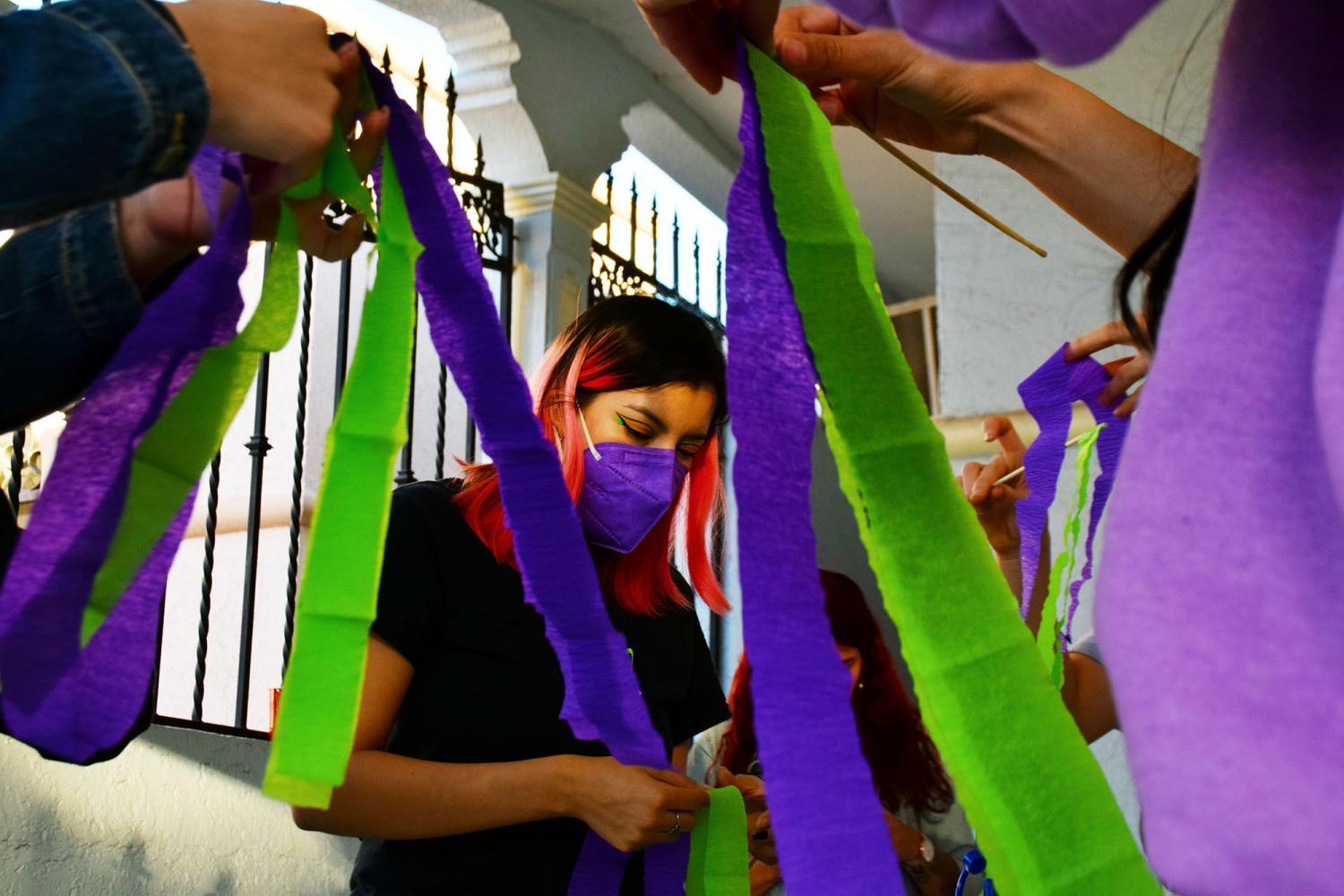 Kendal Blust/KJZZ
Feminist collectives prepare for the 8M march by making streamers for attendees to wave as they walk through the streets of Hermosillo.

On a recent Saturday, about two dozen women gathered to paint cleverly-worded signs and assemble green and purple streamers — last-minute preparations after months of planning leading up to the International Women’s Day march in Hermosillo. 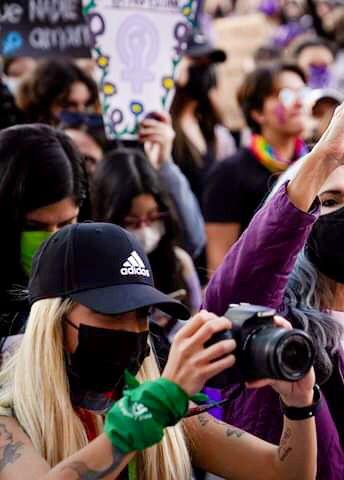 Andrea Sanchez
Carolina Castillo snaps a photo during the march in Hermosillo, Sonora, on March 8, 2022.

“Not feeling alone, feeling connected to other women brings so many women into this movement,” said Carolina Castillo, a member of several feminist collectives.

Helping women feel less alone is an important part of their work, she said.

For decades, feminist groups have accompanied women to police stations and court hearings, provided them with resources to carry out safe abortions and planned workshops, outreach events and protests.

All of their work is voluntary — on top of jobs, school and child care.

“And one thing we know is that we’ll be in this fight forever, because the patriarchal system is always with us,” she said. “And that’s part of what keeps pushing us to action.”

The slow progress they’ve made pales in comparison to their demands, she said.

“Where do we get the strength to keep going, sometimes I don’t know. But we’re still here,” Sanchez added. “It’s a lot of hard work, and it can be painful and it can be a tiring and tireless process. But all of that is paid back on the day of the march.”

See thousands of women standing side by side for the same purpose, she said, makes it all worth it. 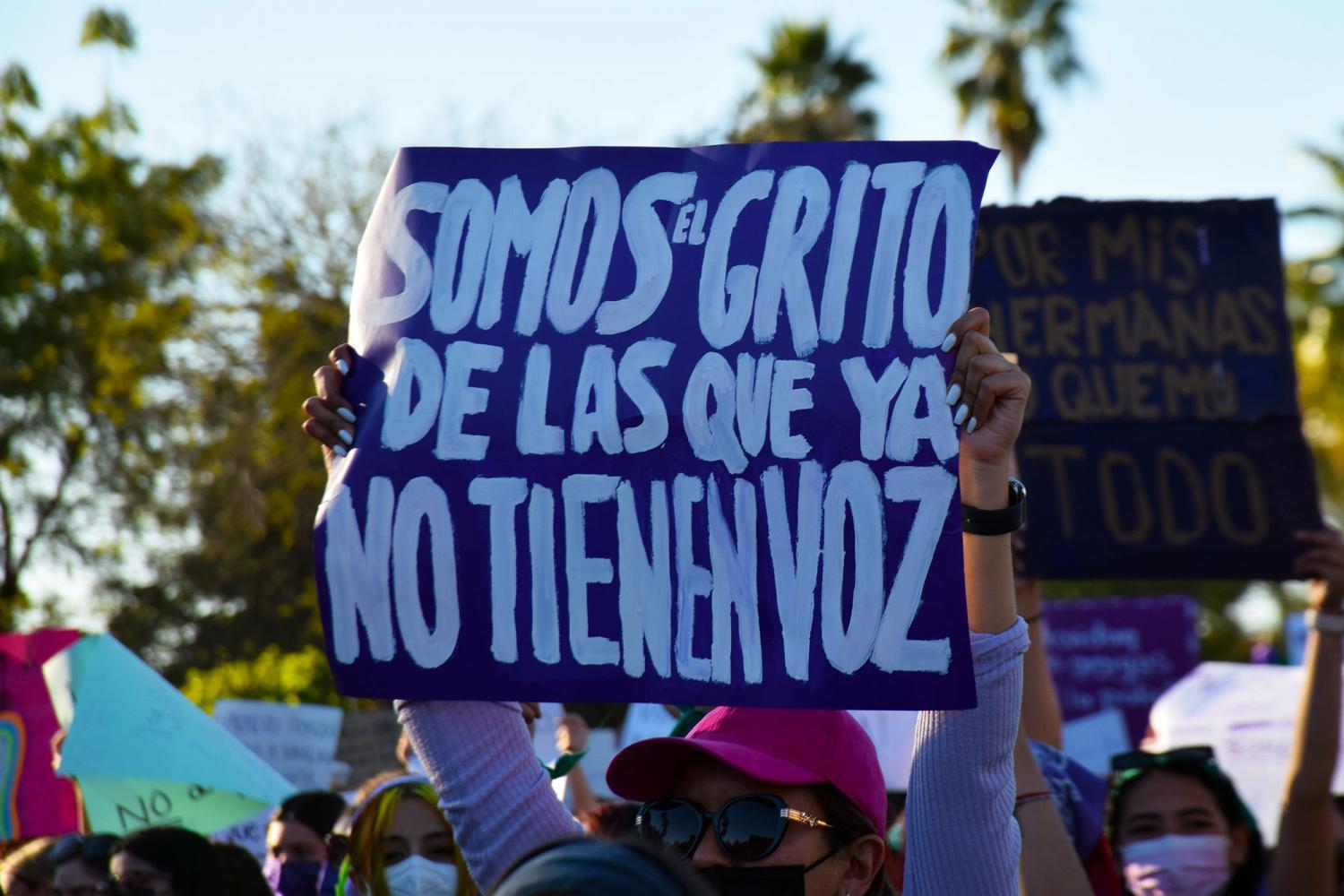 Kendal Blust/KJZZ
A protester holds up a sign that says "We are the cry of those who no longer have a voice."

At the march, chants continued to ring through the crowd until the organizers raised their firsts, calling for silence as they read a statement to some 2,000 women and girls.

“We want to be emphatic in saying, you are not alone,” they shout.

For 27-year-old Anali Alacala, that’s the most important message.

“We need to recognize the strength and the power we have when we are all together,” she said. “This is about equality for all women, including trans people, and women who don’t feel accepted. It’s about inclusivity and intersectionality.”

There’s a long way to go, she said. But marches like this one show the world that they’re not backing down. 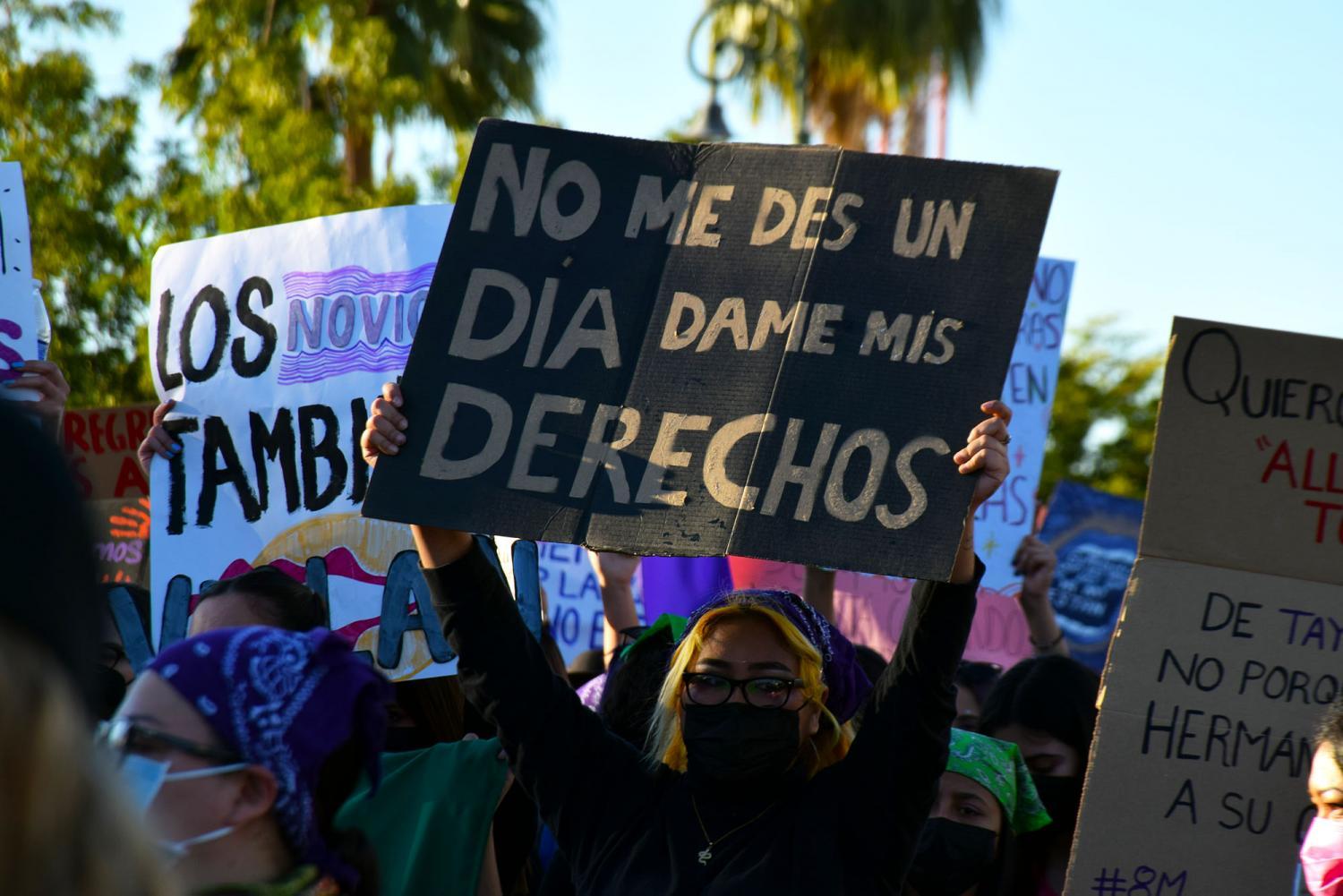 Kendal Blust/KJZZ
A marcher carries a sign that reads, "Don't give me a day. Give me my rights." 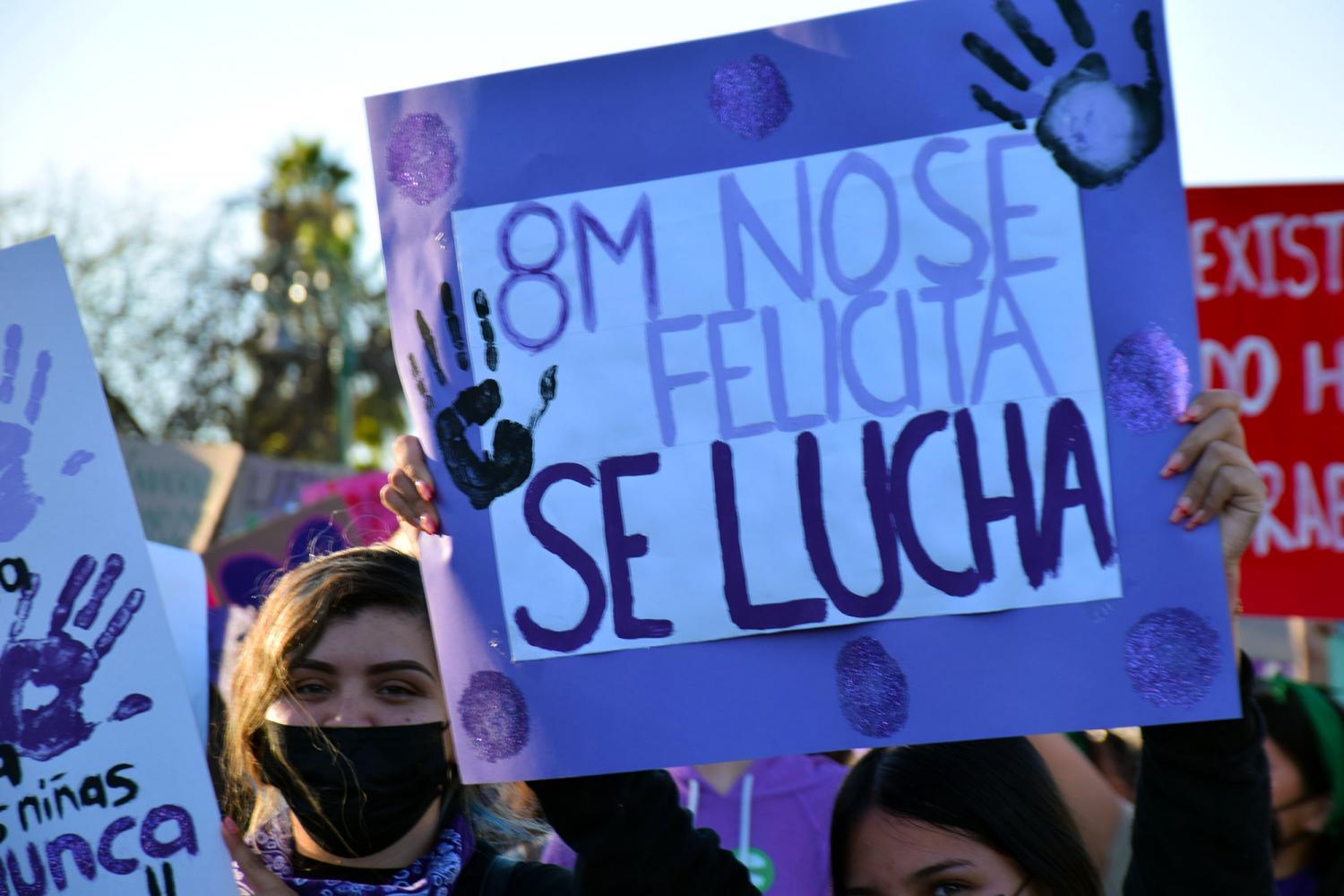 Kendal Blust/KJZZ
"8M isn't congratulated, it's fought," reads the sign of a marcher in Hermosillo, highlighting the call from many femininsts not to call the day a celebration. 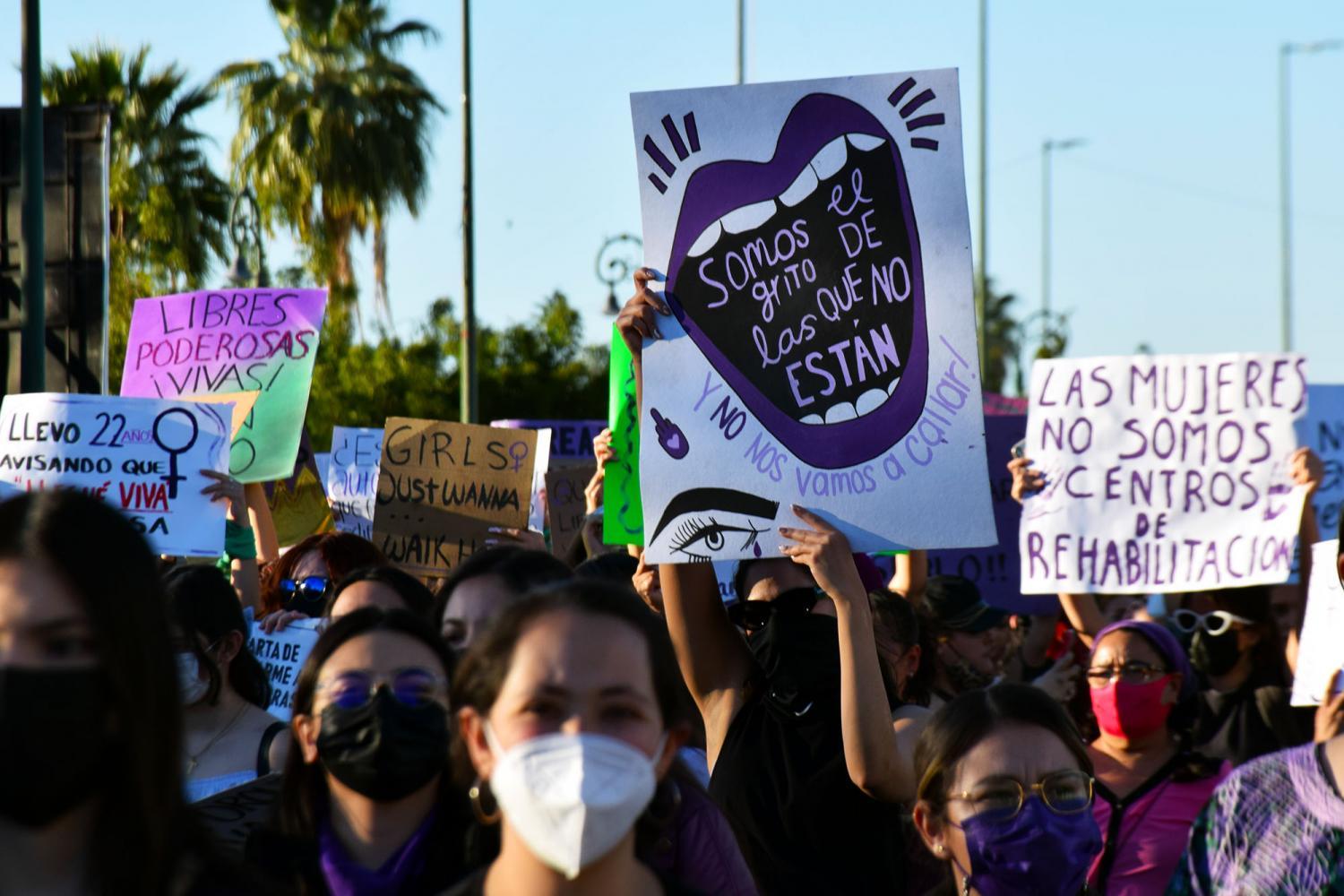 Kendal Blust/KJZZ
Protesters hold up signs as the march though Hermosillo, Sonora, on March 8, 2022. 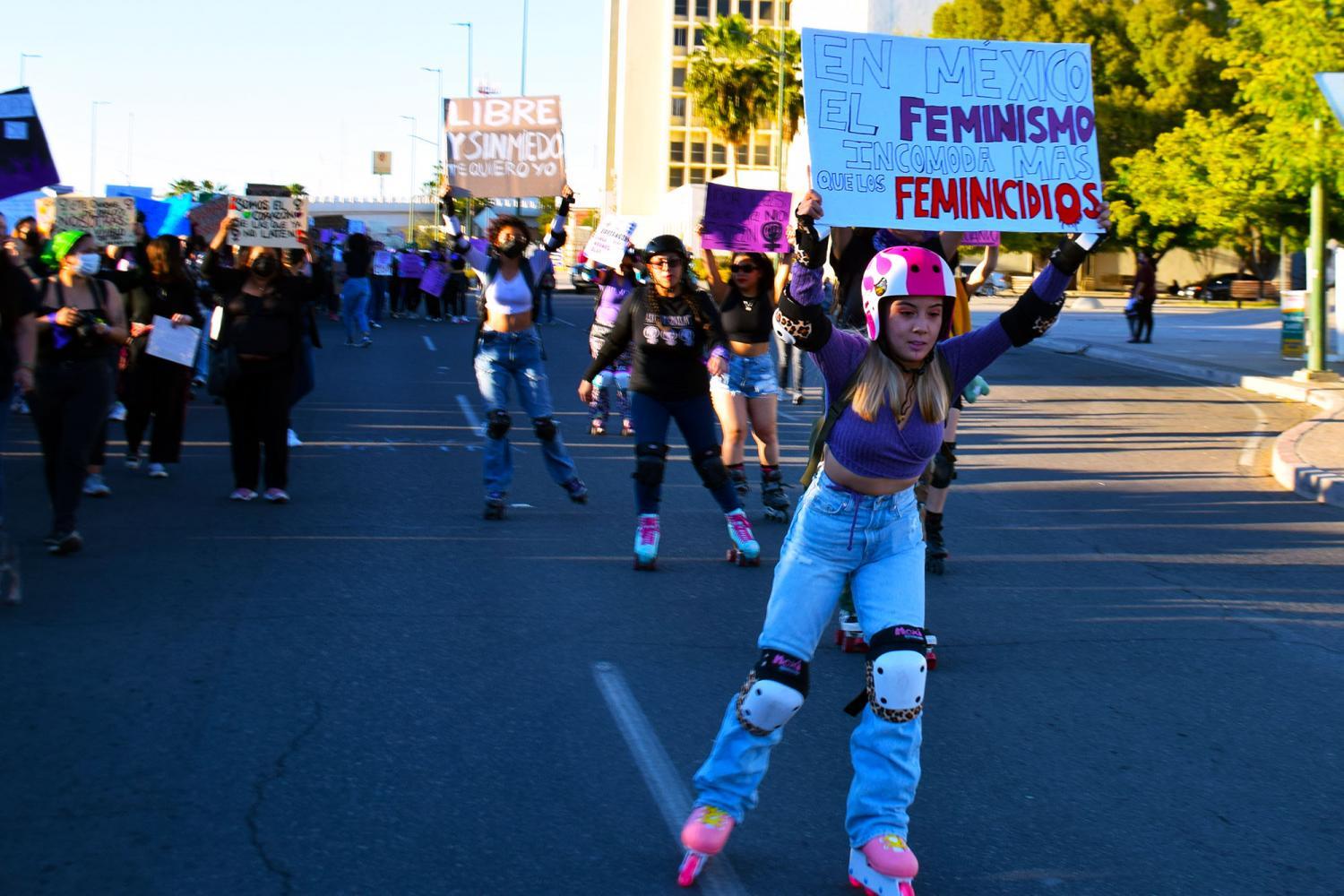 Kendal Blust/KJZZ
Protesters rollerblade during the 8M march in Hermosillo on March 8, 2022. 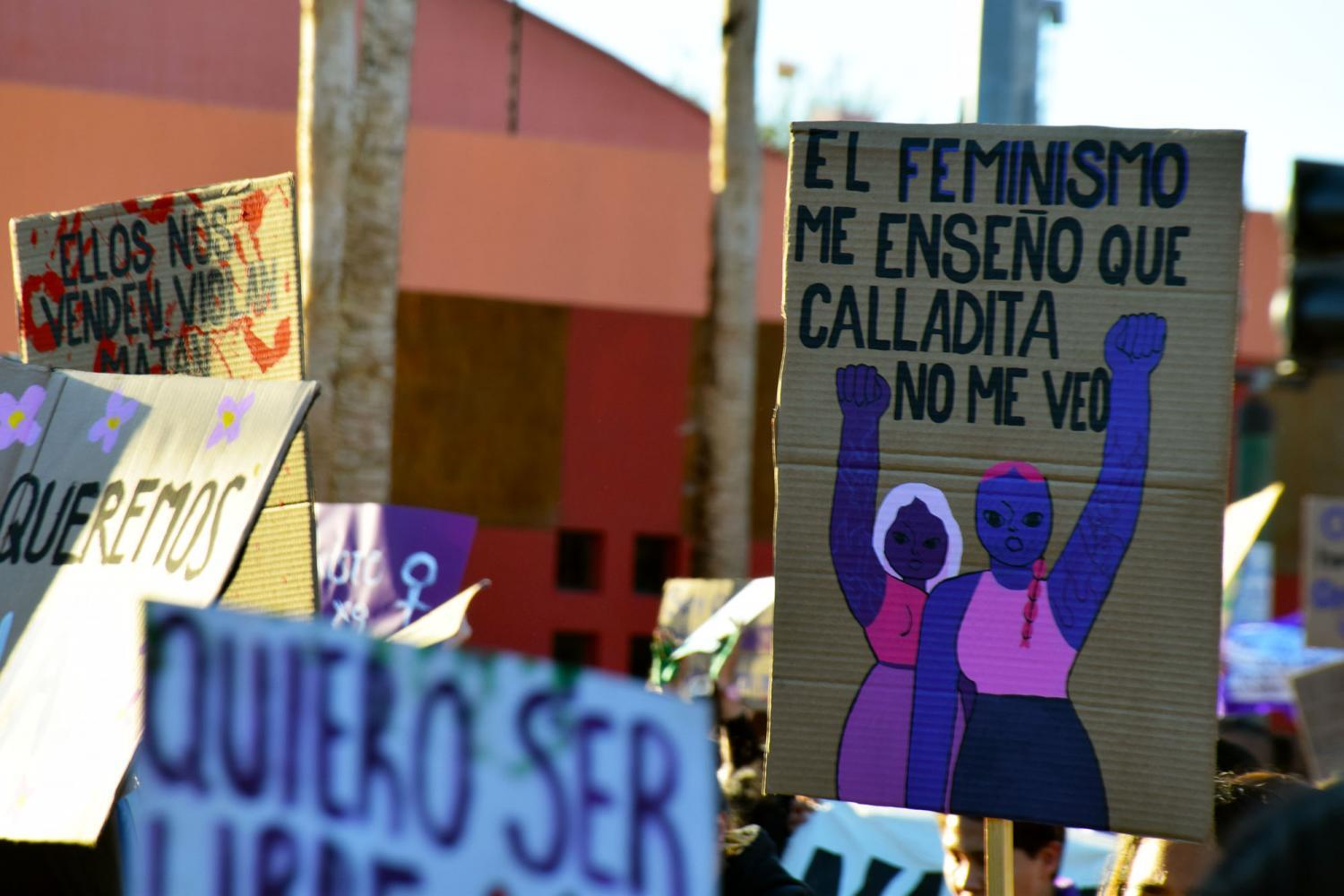 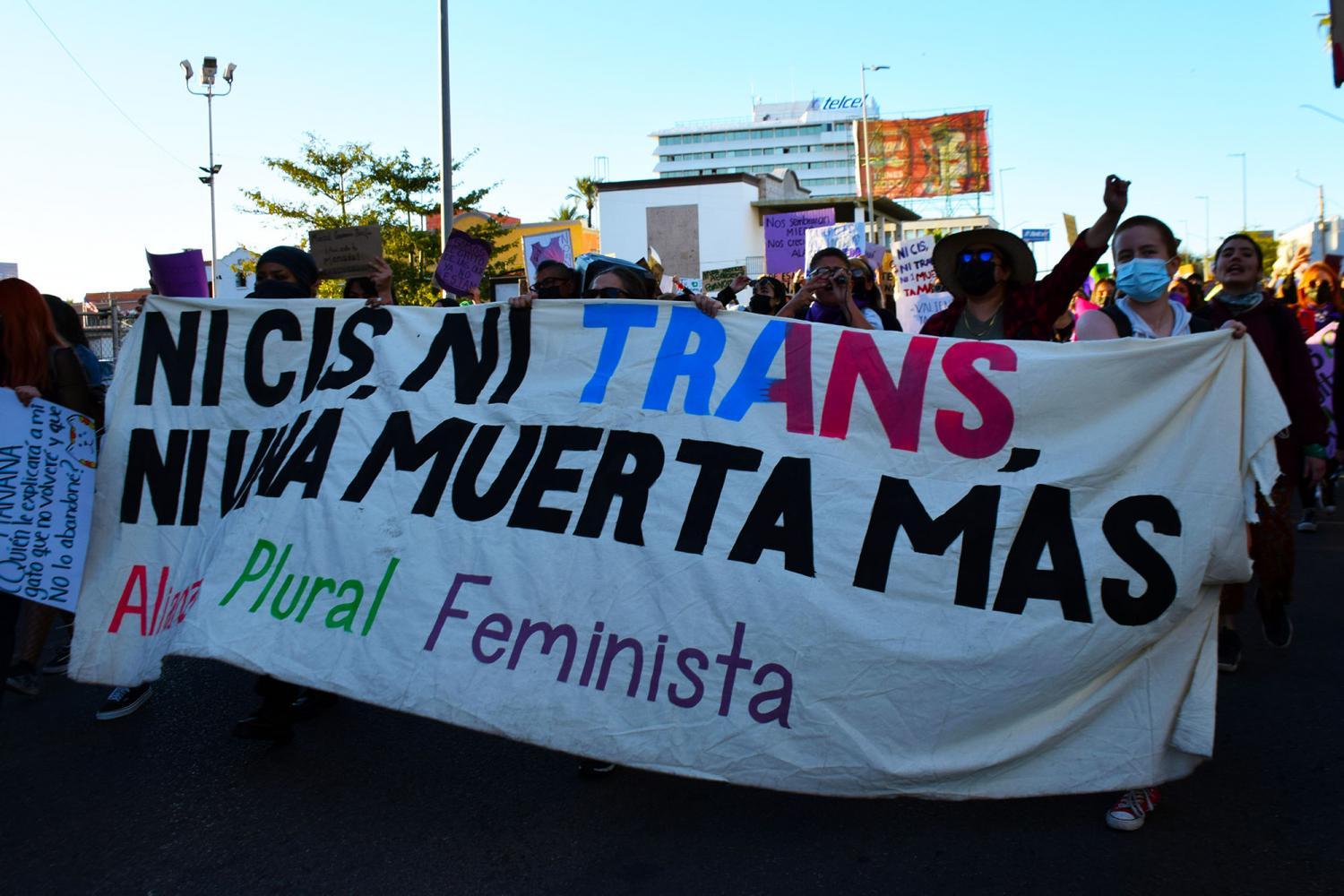 Kendal Blust/KJZZ
Some marchers carry a banner that reads, "Neither cis nor trans, not one more woman killed," during the 8M march in Hermosillo. 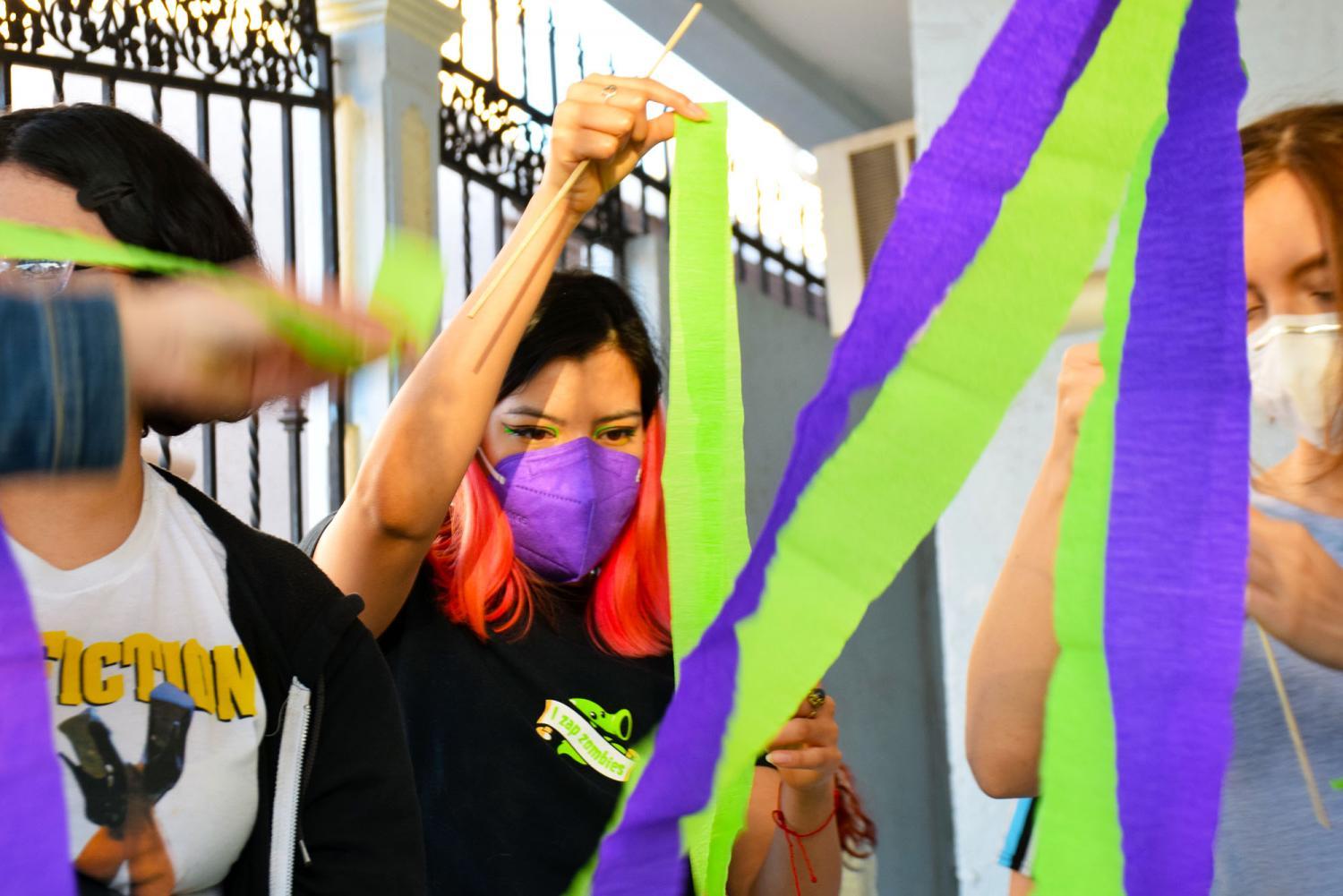 Kendal Blust/KJZZ
Feminist collectives prepare for the 8M march by making streamers for attendees to wave as they walk through the streets of Hermosillo. 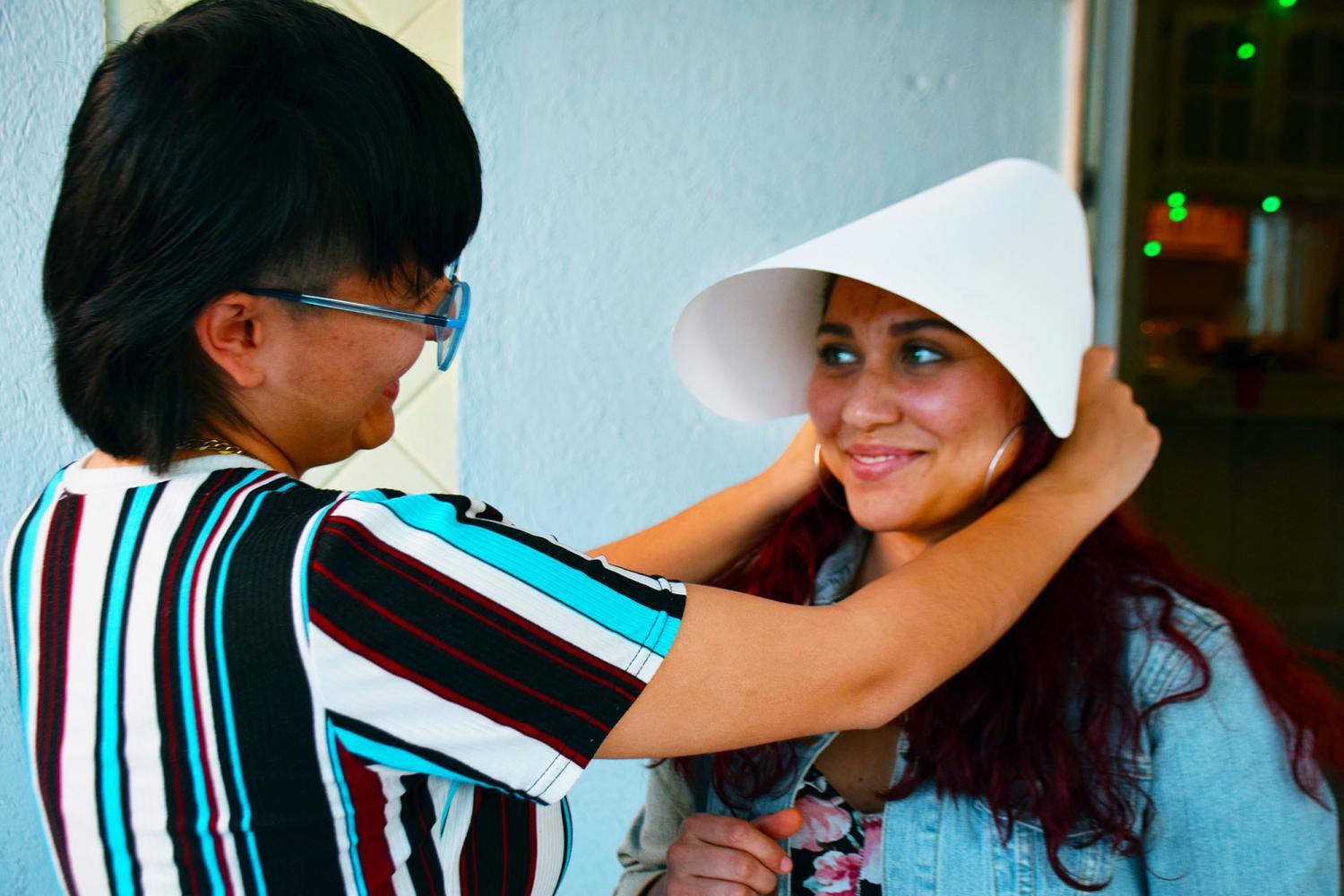 Kendal Blust/KJZZ
Feminist collectives prepare for the march by making bonnets like those worn in the TV series "The Handmaid's Tale." 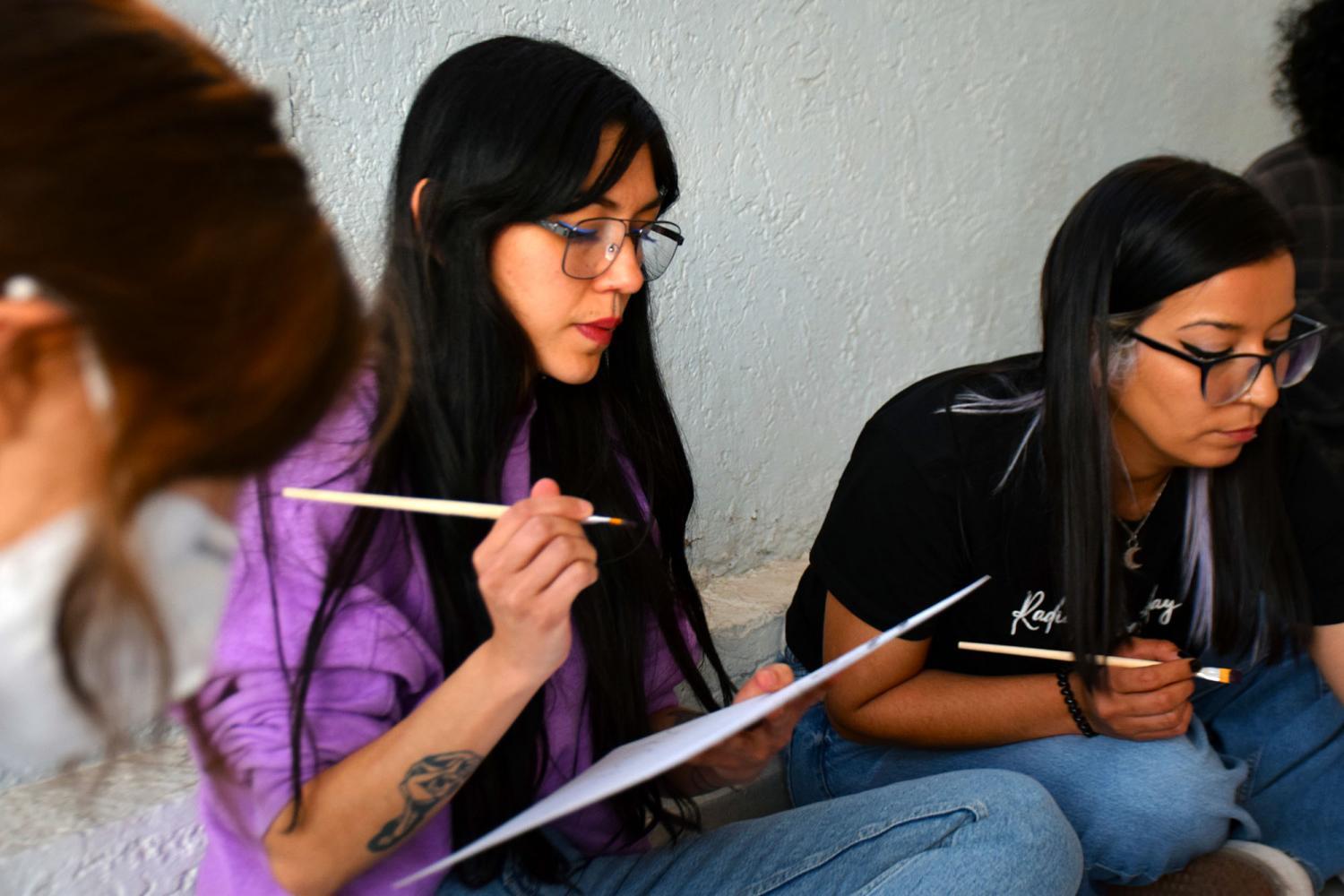 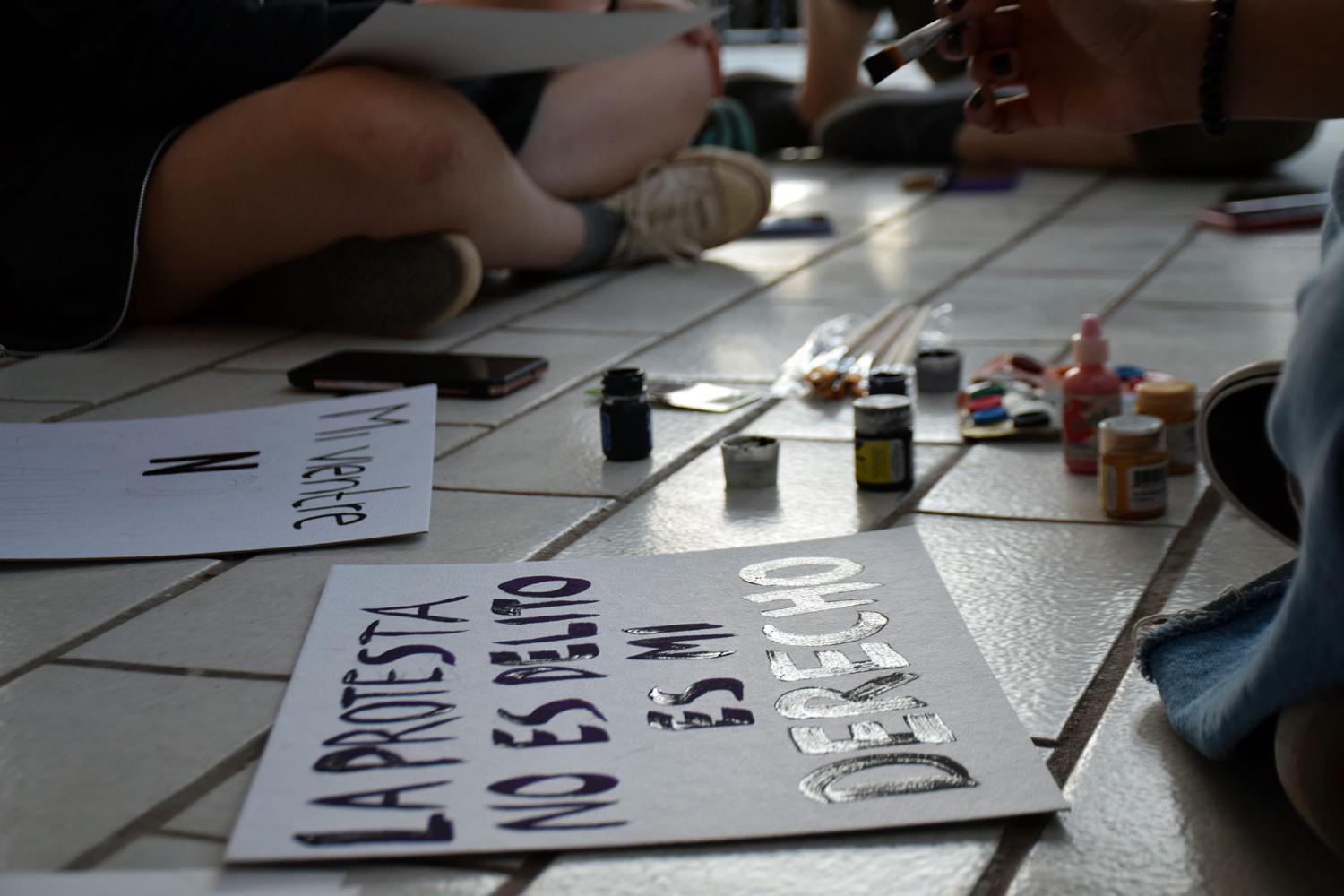 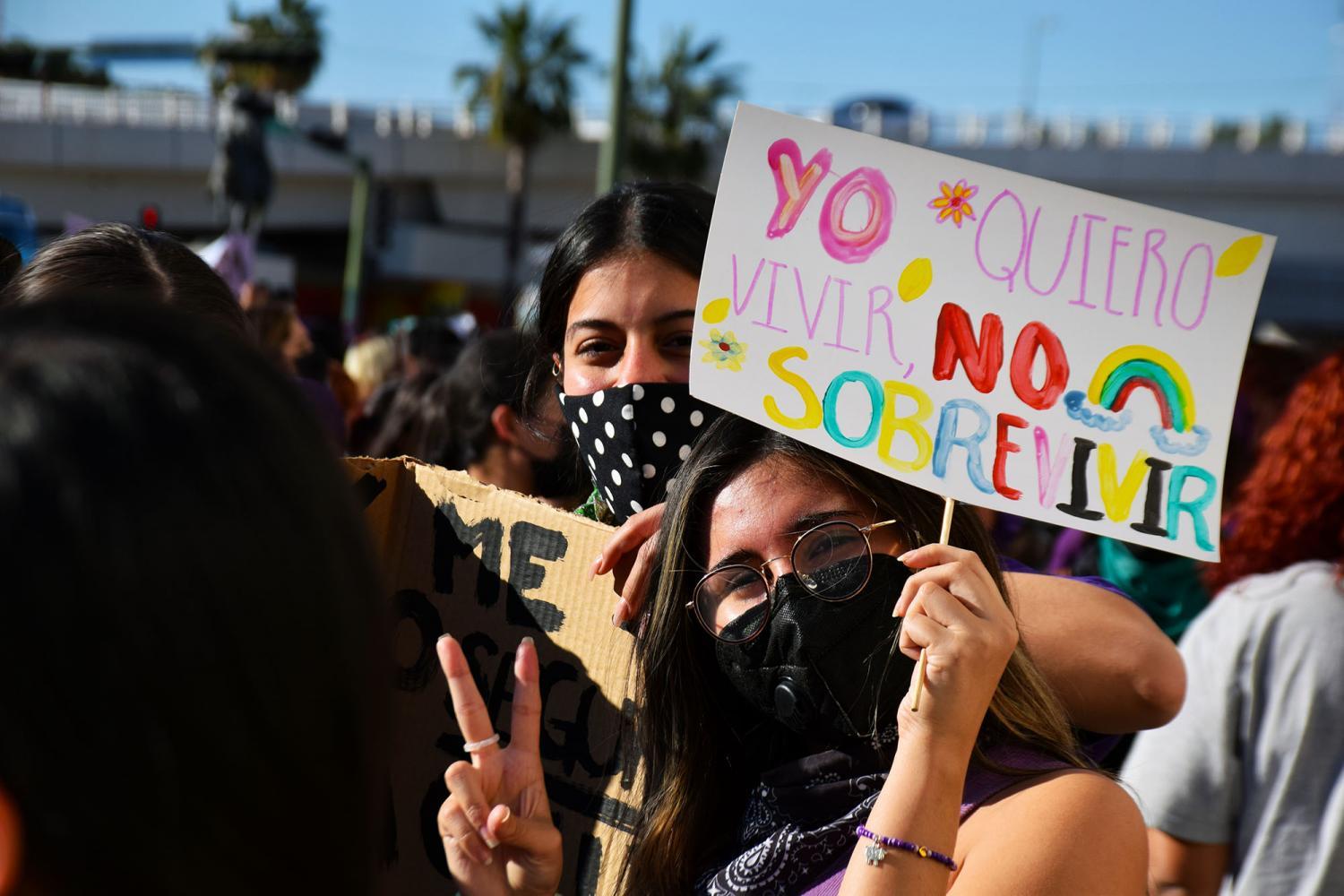 Kendal Blust/KJZZ
Protesters hold up a sign that says, "I want to live, not survive."
Fronteras Sonora