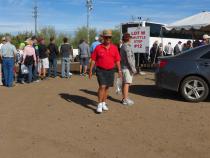 (Photo by Annika Cline-KJZZ)
A morning transportation backup on Thursday led to lines of spectators waiting to board shuttles.

Golfers teed off Thursday morning in the first round of the Phoenix Open, but before spectators could get to the “greatest show on grass,” many had to get off the dirt. A long wait at a parking lot kept some spectators from getting to the grass as fast as they would have liked.

Wayne Harrison waited in line with his wife at around 10 a.m. on Thursday to get through security. After that, another line would get them on a shuttle. Although the Harrisons have been to the open before, it was their first time using the general parking facilities. Last year they were staying nearby and were able to simply walk to the course.

David Ziff and his wife waited in a line that wrapped around parked cars. People first went through a security tent then lined back up to get onto a shuttle. The problem, said the Ziffs, there was not enough shuttles. David Ziff said they attended the open last year on a Friday and parked in the same lot, but he did not remember the wait being this bad. The couple flies into the Valley from Missouri, but Ziff said they will not be coming back.

Others waiting near the front of the line near shuttle stop 12 also complained about waiting over an hour, as parking lot workers tried to assure them the problem would be resolved. A spokesperson for the Phoenix Open said this afternoon they became aware of the lack of shuttles Thursday morning and arranged to have more sent out immediately.