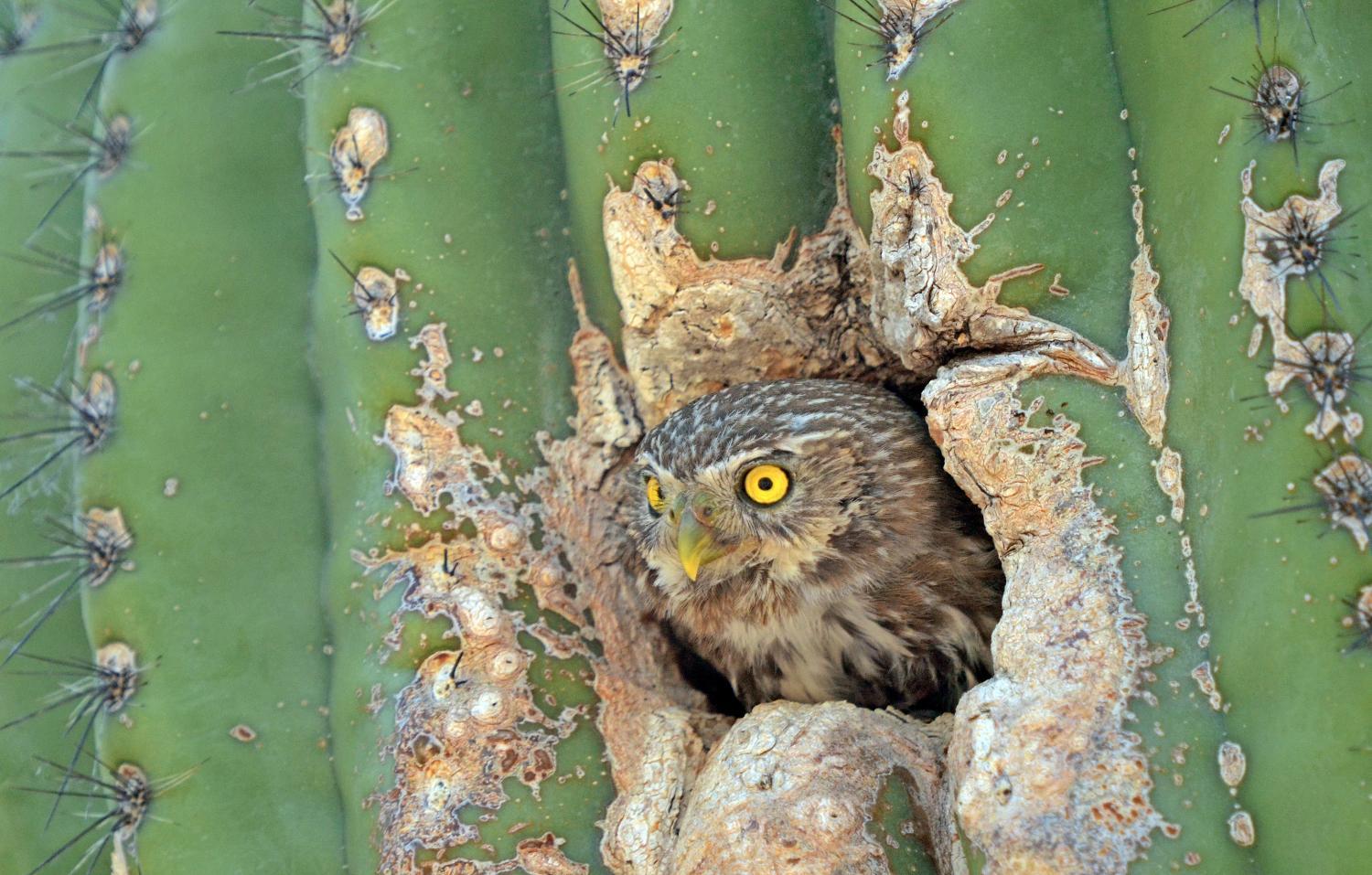 When scientists want to find cactus ferruginous pygmy owls in the wild, they often broadcast recordings of its calls.

“They’re remarkably responsive,” said Aaron Flesch, a research scientist in the School of Natural Resources and the Environment at the University of Arizona. “They’re viciously territorial. I mean, we’re not fighting them off with badminton rackets or anything. But they bark at you when you call, and you can hear them from a long way away.”

For more than two decades now, Flesch has been monitoring the owl's population in Arizona and neighboring Sonora.

Historically, the tiny brown and white owls known for nesting in saguaros and other columnar cacti, had an extensive range in Arizona, living in lowland riparian areas and mesquite bosques from the borderlands all the way to Phoenix, he said. But habitat loss has dramatically constricted their population to just a handful sites south of I-10. 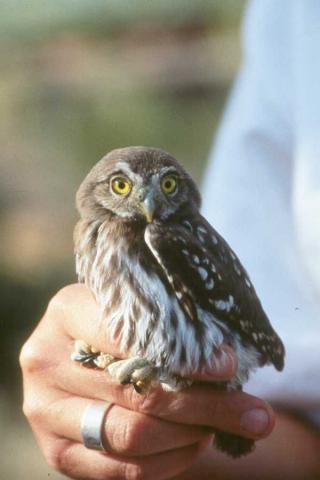 “And recently there’s a bunch of new threats in Arizona,” he said. “Those include, you know, climate change, lots of land cover changes related to urban development, and even border development.”

His recent studies in northern Sonora have also turned up evidence of growing habitat disruption in areas where the owls are known to nest.

The owls are small, usually less than 7 inches long, and weigh only a couple of ounces. They don’t migrate, and tend to move only short distances, flying low to the ground to avoid predators.

“You know, they’re like these plump little meatballs with wings, right,” Flesch said. “And so they want to stay out of the air column, so they don’t get picked off. Because most of their predators are aerial predators: hawks and ravens and owls.”

That means major roads, agricultural fields, housing developments or a border wall are likely to discourage their movement. The wall in particular jeopardizes connectivity between U.S. owls and more abundant Mexican populations, which Flesch calls essential for the recovery of the species in Arizona.

The U.S. Fish and Wildlife Service last December proposed listing the owl as a threatened species throughout its range, which includes areas of Arizona and Sonora, as well as Texas and other parts of Mexico.

“The decision to put a species on the Endangered Species List is not a small thing. We don’t take that lightly,” said Scott Richardson is a supervisory biologist with the Wildlife Service.

He said because of factors include habitat loss, invasive species and impacts of climate change, the Service found that the owl’s future outlook was dire enough to warrant all the protections usually afforded to endangered species. The proposal does, however, suggest exempting conservation-related activities from regulations that prohibit take — anything that would kill, harass or harm the species, which is usually fully banned.

Those exemptions could apply to habitat restoration, monitoring, outreach and education.

“That status really provides a lot of protection and attention and a lot of focus on trying to make sure the species doesn’t go extinct,” said Noah Greenwald, endangered species director at the Center for Biological Diversity — one of the conservation groups that’s been fighting for years for the owl’s protection.

The species was previously listed as endangered in Arizona in 1997, but was delisted in 2006 for reasons unrelated to recovery when developers successfully sued the Service. Since then, conservation advocates have repeatedly petitioned and sued to relist it. That ultimately led to a 2019 settlement that requested the service make a new determination by 2021. 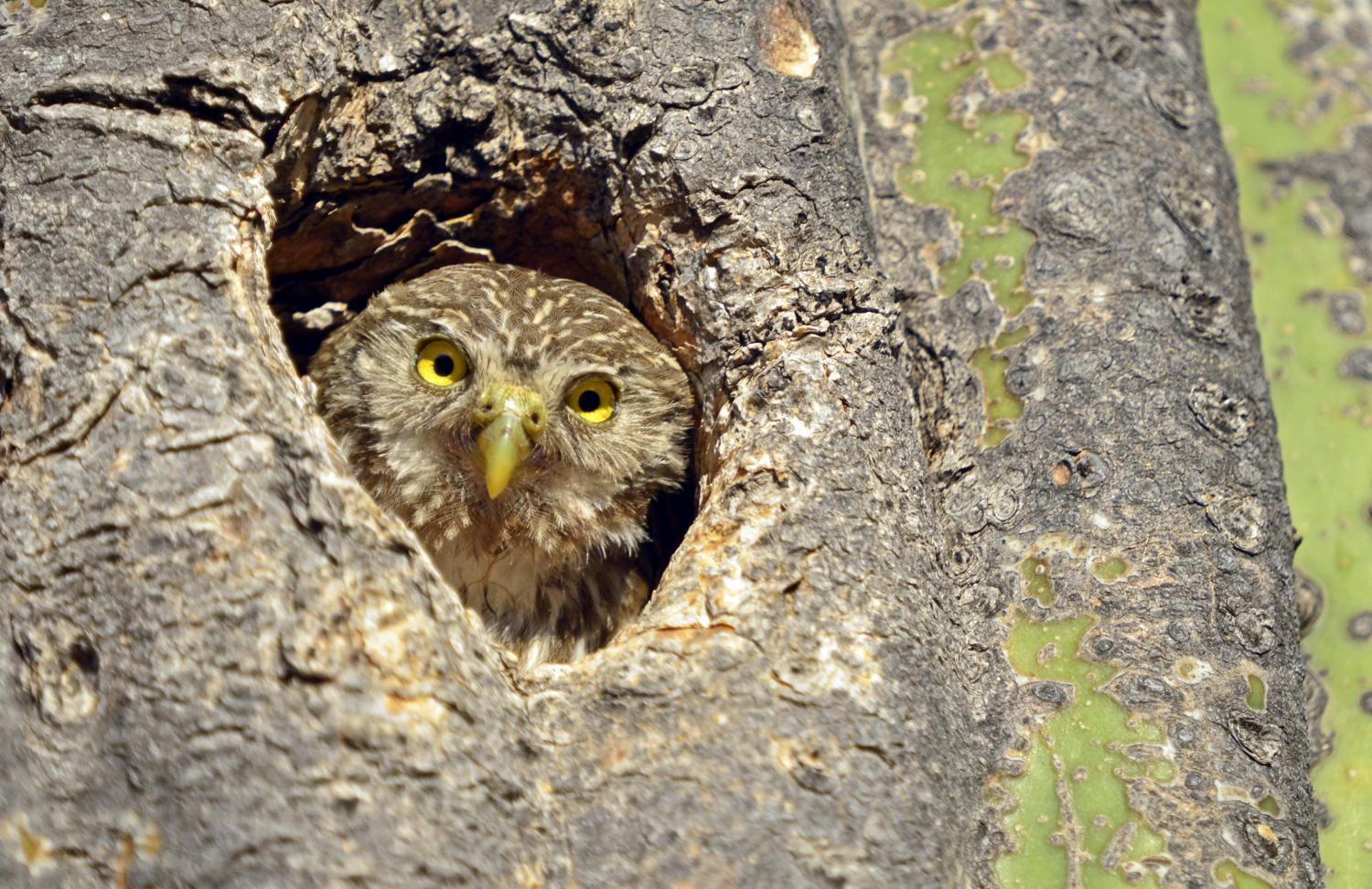 Aaron Flesch
A cactus ferruginous pygmy owl peers out of a hold in a saguaro cactus.

Pushing to get the cactus ferruginous pygmy owl listed under the Endangered Species Act is not only important for the imperiled bird, but also for what it represents, Greenwald said. He called it an indicator for the health of the environment.

And without protections for the last 15 years, the owl faces even greater threats.

The Service has until the end of the year to make a final determination on its threatened status. If it’s approved, it would also set aside critical habitat to protect areas essential to the owl’s survival, establish a recovery plan and increase monitoring of the bird’s population. 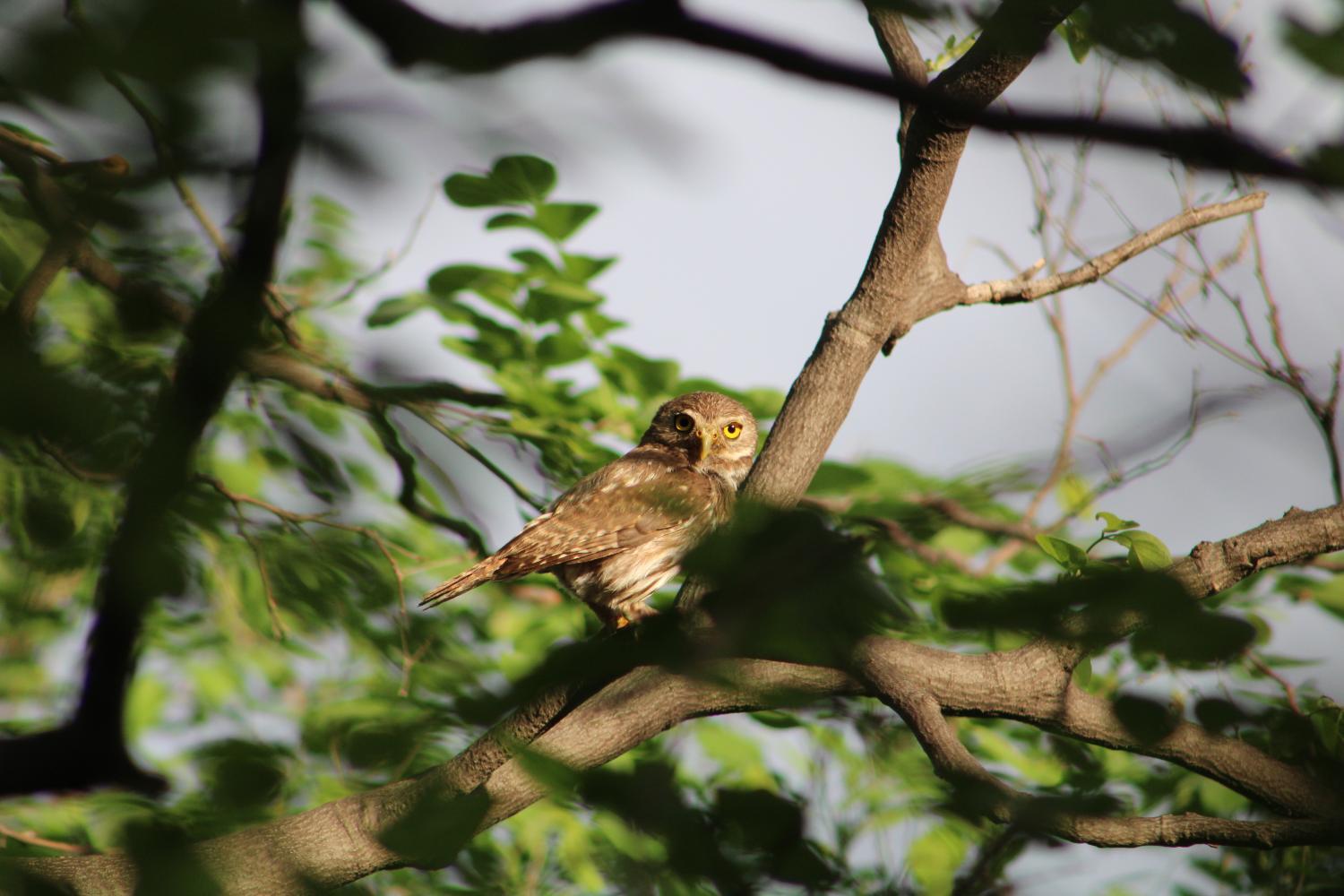 But some worry the proposal isn’t specific enough to the particularly vulnerable Sonoran Desert owl population.

Flesch and others argue that cactus ferruginous pygmy owls in Arizona and Sonora are distinct from other members of their subspecies because they live in a warmer, drier climate, and face unique threats.

“They’re in an environment where rainfall is highly dynamic and very fickle,” he said. “The population sizes can double or decline by half just due to strings of really dry or really wet years.”

His research shows that the owls are extremely sensitive to drought and heat, which affect vegetation and prey the owls rely on for survival.

Recognizing that distinct context could help the listing withstand legal conflicts like those that stripped earlier protections, he said. Identifying the Sonoran Desert owl population as sufficiently separate from others of the subspecies could also make it more likely to be considered endangered, since owl populations in Arizona and Sonora are estimated to be much lower than in other parts of its range.

So researchers have been trying to identify genetic differences between Sonoran Desert owls and other populations.

“We’re literally just getting the emails as we’re talking to you now,” Michael Ingraldi said during an interview in February.

A wildlife research biologist with the Arizona Game and Fish Department, Ingraldi and his team did genetic sampling in Mexico last year, and results are just starting to roll in.

“It takes time to analyze the data, and they’re just getting the results. So I wouldn’t say anything yet,” he said.

But his colleague and fellow AZGF biologist Stephanie Cobbold said in a later email that preliminary analyses suggest a “pattern of isolation by distance," and that there is a gradual genetic difference between Sonoran owls and those farther south in Jalisco and Colima. She added, however, that their study is ongoing.

Their team has worked closely with researchers in Mexico to learn more about the species, which Ingraldi and Cobbold said is in need of much more study throughout it’s range. 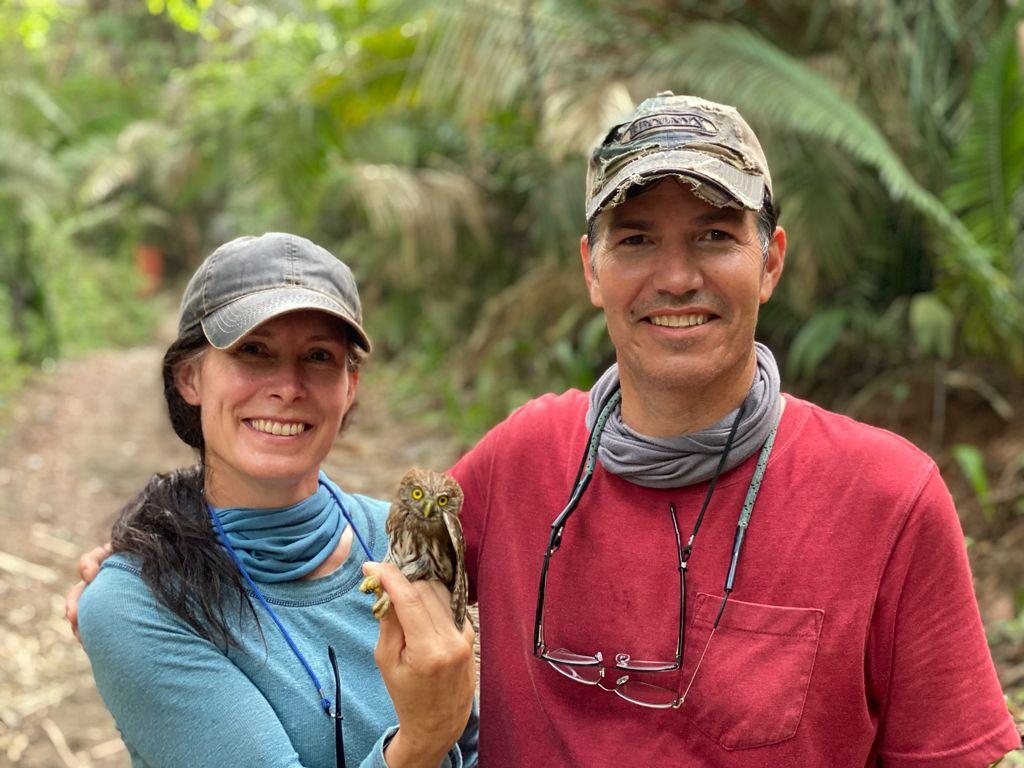 “Maybe a few ranchers know it by its song, but most people don’t recognize it, or they confuse it with another small owl in Sonora, the burrowing owl,” he said.

Known as the tecolote bajeño south of the border, the pygmy owl doesn’t have any protections in Mexico. But Leon hopes if it’s listed as threatened in the U.S., that could increase resources for conservation and monitoring in Sonora as well.

“It’s really important that we have this kind of binational collaboration — not just for the owl, but for jaguars and gray wolves and Sonoran pronghorn. Because wildlife doesn’t know borders,” he said.

“That awareness, that interest, we hope it’s there so that we can work together,” he said. "Our connection with Mexico is going to be really important to understanding the owls, and for recovery."

Mexican birds will need to cross the border naturally, or be brought into ongoing captive breeding programs, in order to increase Arizona’s owl populations and maintain genetic diversity for the species north of the border, he said.

It remains to be decided whether the cactus ferruginous pygmy owl will get federal protections. But despite their small stature and the many threats they face, Ingraldi said he’s hopeful.

“To be that small, you’ve got to be ferocious,” he said. “And you know, they are fighters. And that’s what I love about them.” 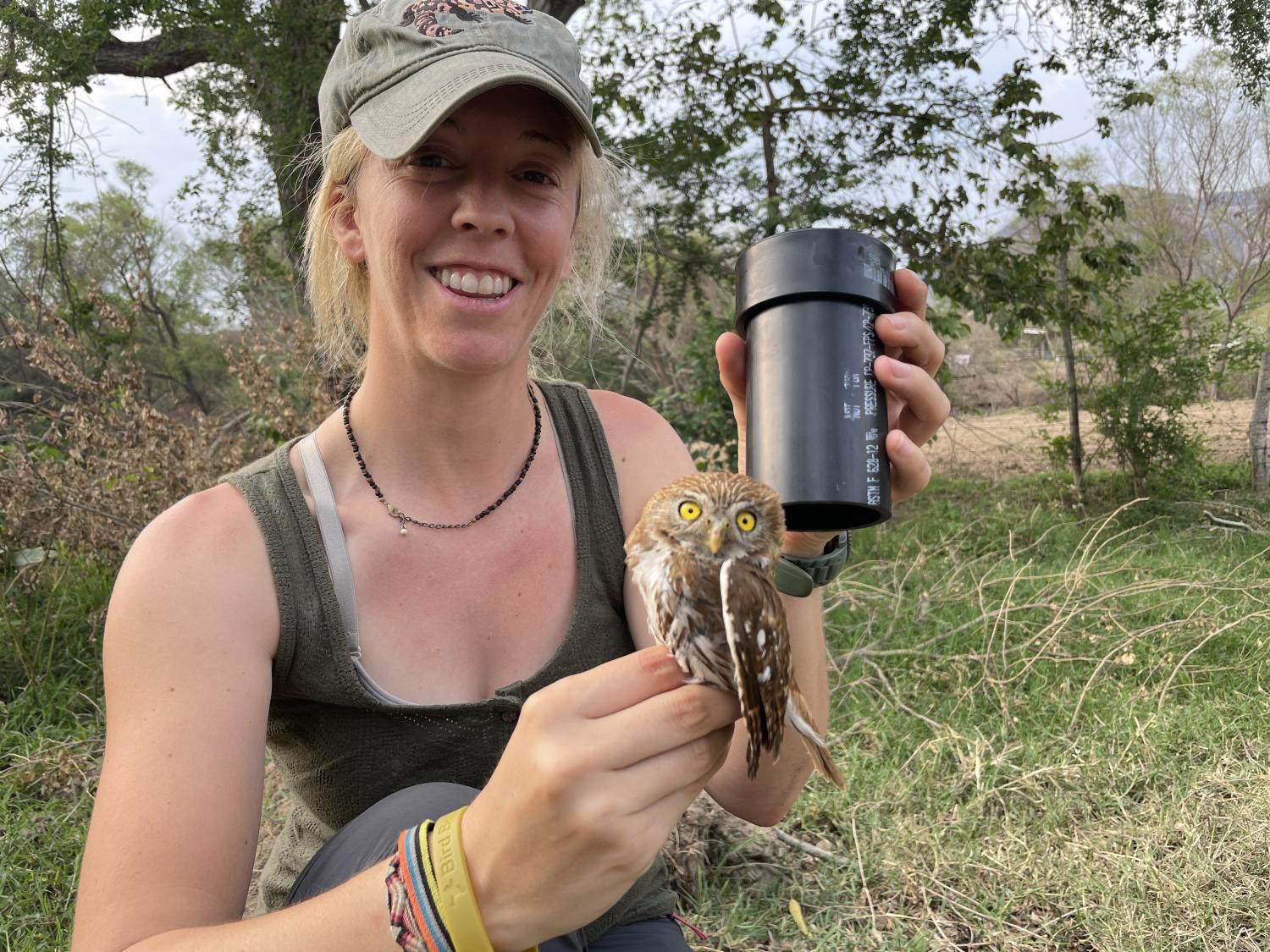 Michael Ingraldi
Stephanie Cobbold, with the Arizona Game and Fish Deparment, holds a cactus ferruginous pygmy owl during a study in Mexico in 2021. 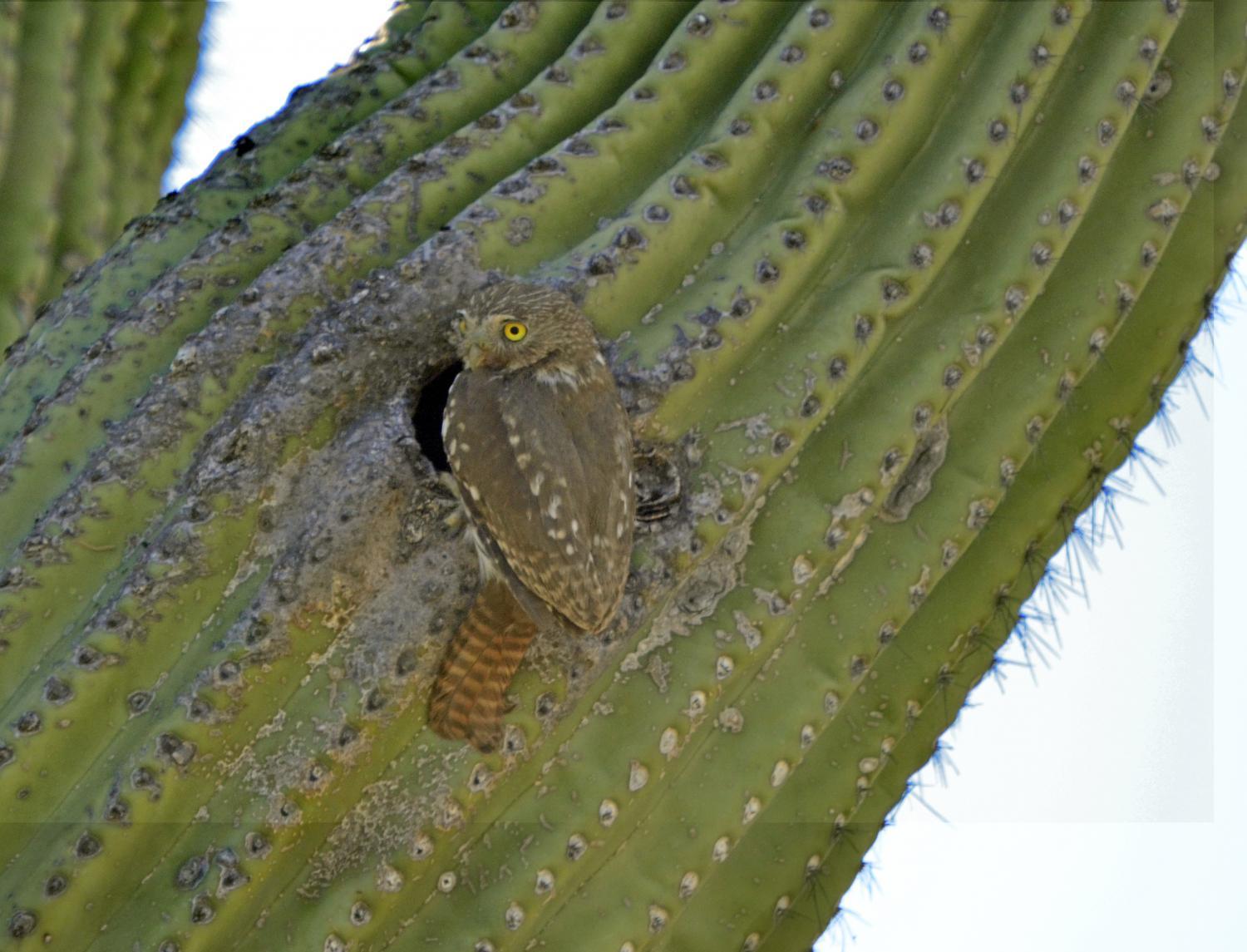 Aaron Flesch
The cactus ferruginous pygmy owl is a secondary saguaro nester, using holes made by other animals to build its nests. 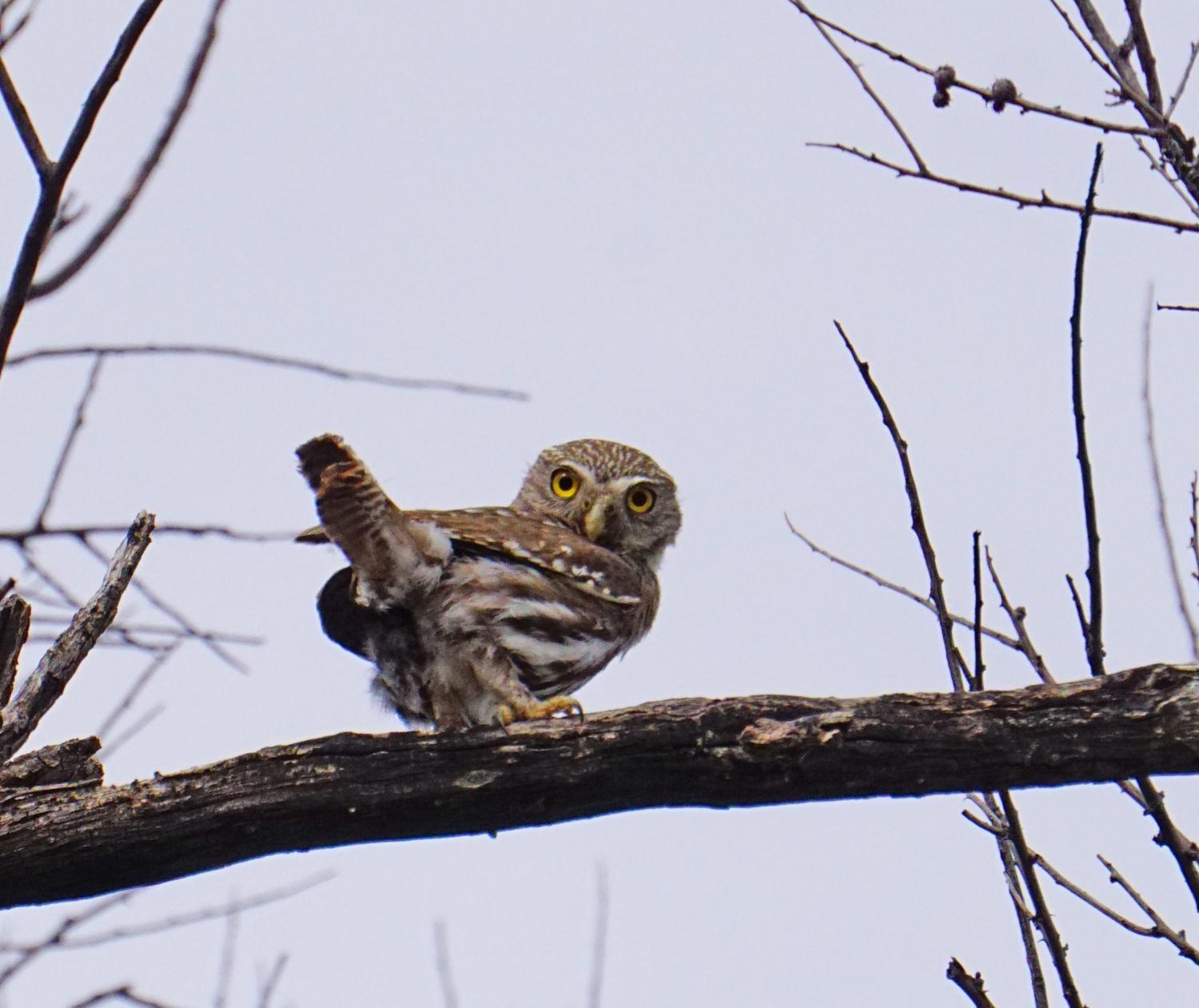 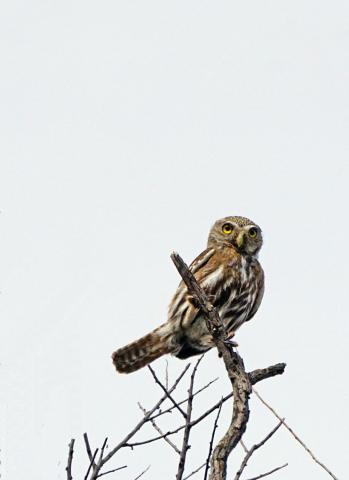