Why Phoenix neighbors cheered the demolition of an old Village Inn

It’s not unusual for people in Phoenix to mourn the loss of a business — especially one with longtime ties to a neighborhood. But one community found reason to celebrate Tuesday as a former restaurant was demolished at Interstate 17 and Northern Avenue.

"We brought celebration balloons out because we’re having a big party here today at the old Village Inn," said longtime resident Jeff Spellman who recalled good memories of the restaurant. "What a great place that was to go and have pie or get pie for family affairs and things like that."

The national chain known for its homemade pies, hadn’t served a slice at 25th and Northern avenues for about a decade. For several years, the only activities were weeds growing, trash piling up, and people breaking into the vacant building. 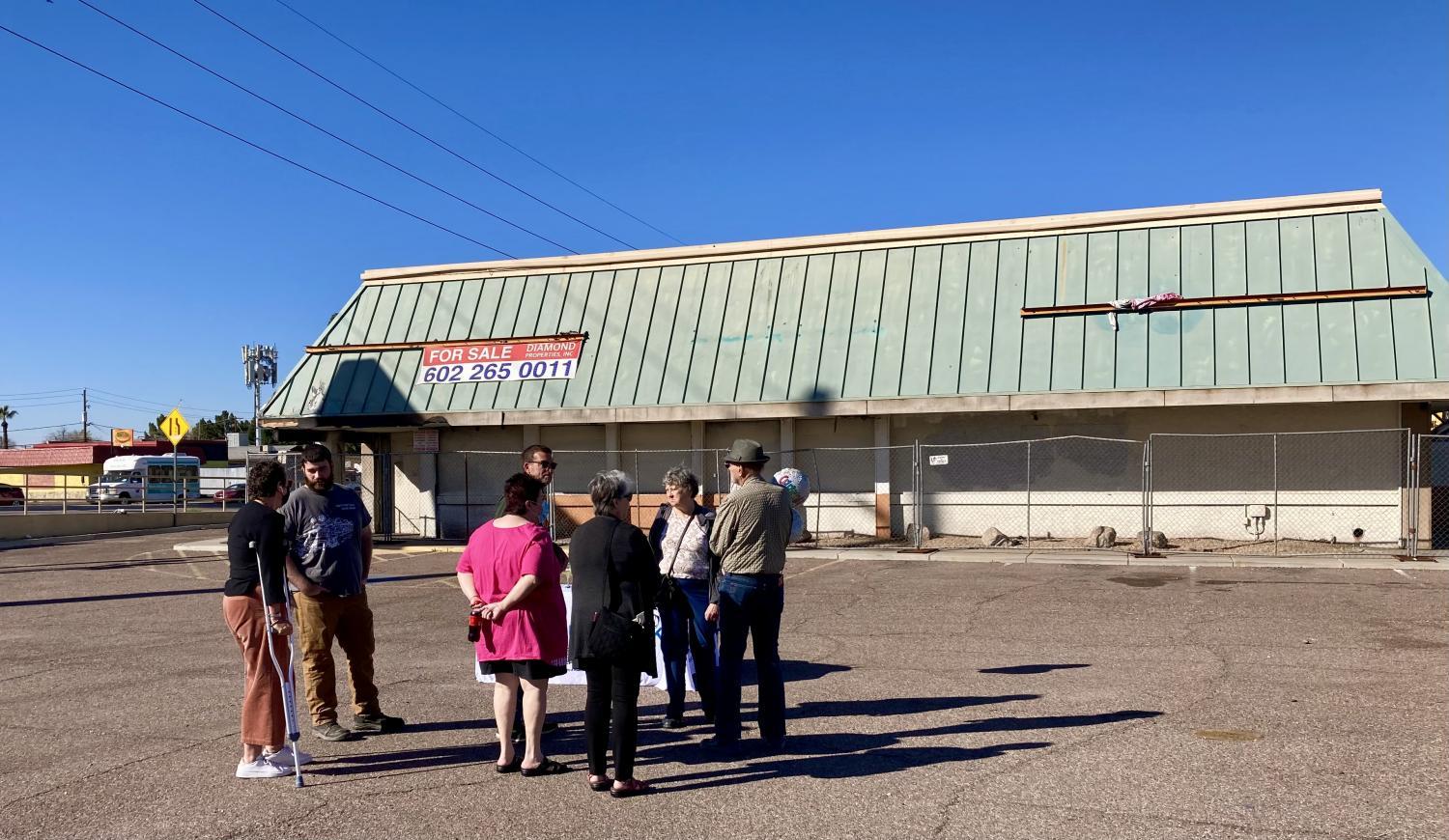 Christina Estes/KJZZ
Neighbors gather to watch the demolition of the former Village Inn on Feb. 15, 2022.

As cars zipped by the northwest corner of I-17 and Northern, residents set plastic champagne flutes on a table next to colorful balloons dancing in the wind. Behind them, chunks of the faded turquoise roof toppled down.

Lozier said the owners became unresponsive to city notices to clean up the property and rebuild, reactivate or demolish it. A municipal court judge eventually approved Phoenix’s request to tear it down.

"So demolition is considered one of our more extreme measures, we don’t take it lightly," he said. "We’re actually taking control of somebody’s property and removing a building, which has some value, even if it’s damaged so we don’t take that lightly." 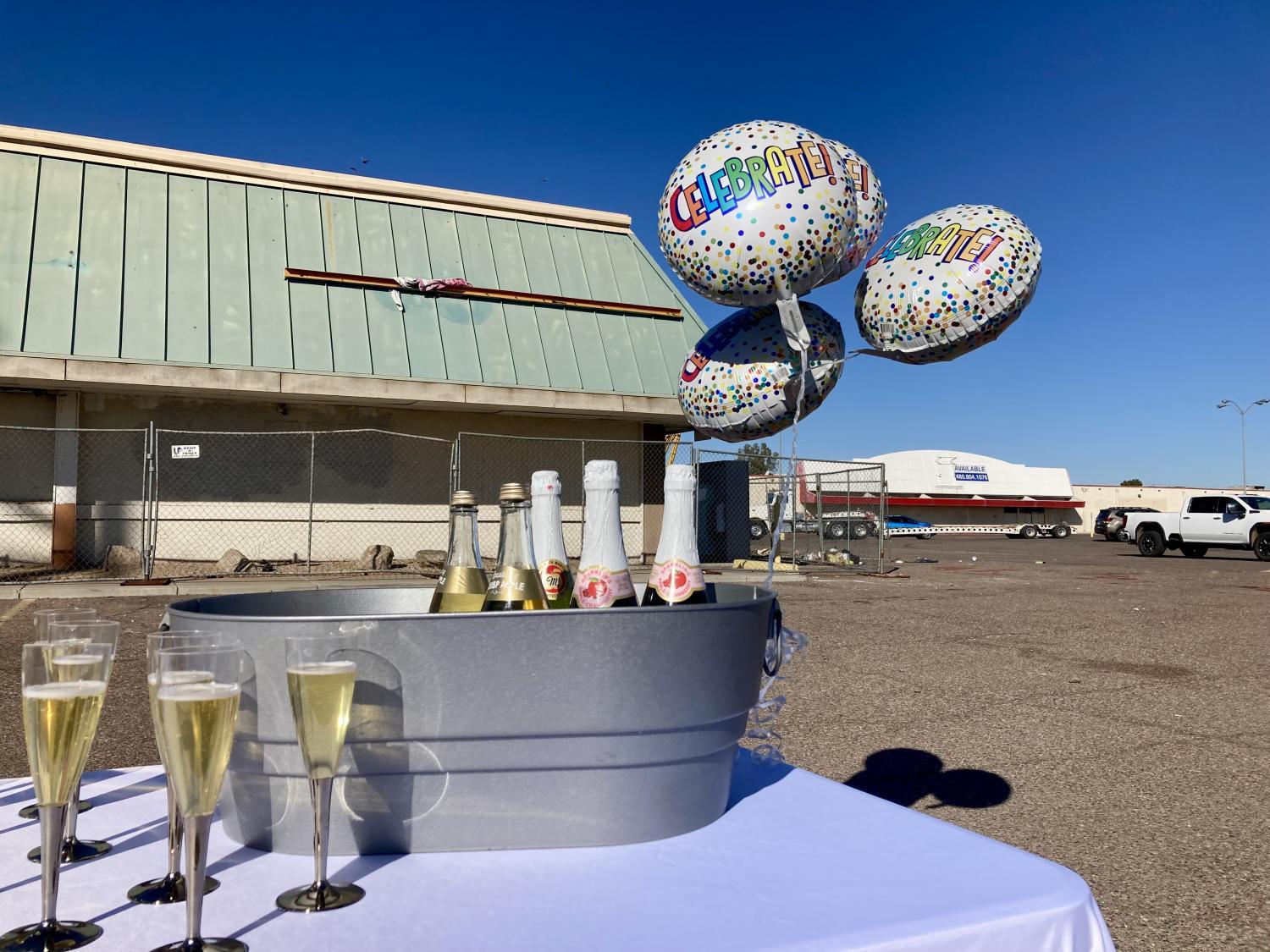 Christina Estes/KJZZ
Neighbors brought balloons and sparking grape juice to celebrate the demolition of the former Village Inn on Feb. 15, 2022.

A metal claw connected to a bright yellow track hoe bit into walls. In one corner, still attached, hung a framed picture of grapes. There were grapes on the other side, too. Sparkling grape juice poured into flutes and clinked in celebration.

"Adios, Village Inn," said one person. Another chime in, "The Village Inn is toast."

But he pointed out the demolition is key to the mission of his neighborhood group.

"Nobody’s been able to repurpose the building and the time has come to get rid of it and that’s part of our plan in the Violence Impact Project coalition is getting rid of things that have outlived their usefulness and start fresh," he said.

"I’m super excited on what’s happening in this corridor," said Councilwoman Betty Guardado who joined her constituents to toast the demolition.

Christina Estes/KJZZ
The former Village Inn at Interstate 17 and Northern Avenue is near a former KMart, which the city plans to buy.

The Village Inn was directly across from an old Kmart that’s also been vacant for years. The city plans to buy the former store and work with educators to turn the nearly 10-acre site into a campus offering classes and workforce training.

"We’re talking to ASU, we’re talking to the community colleges, we’re talking to West-MEC (Western Maricopa Education Center), who has a done a tremendous job in getting 16-year-olds interested in different careers, that the path not has to be from high school to the university, that there could be some in-between as they decide what they want to pick as a career in the future," she said.

The community’s vision goes beyond the intersection of I-17 and Northern. On Wednesday, the City Council is expected to vote on a $5.6 million pilot project to address public safety and crime prevention along 27th Avenue, all the way from Indian School Road to Bell Road. The two-year plan includes additional outreach to people experiencing homelessness, more undercover operations targeting drugs, prostitution and human trafficking, and mobile cameras installed at intersections. 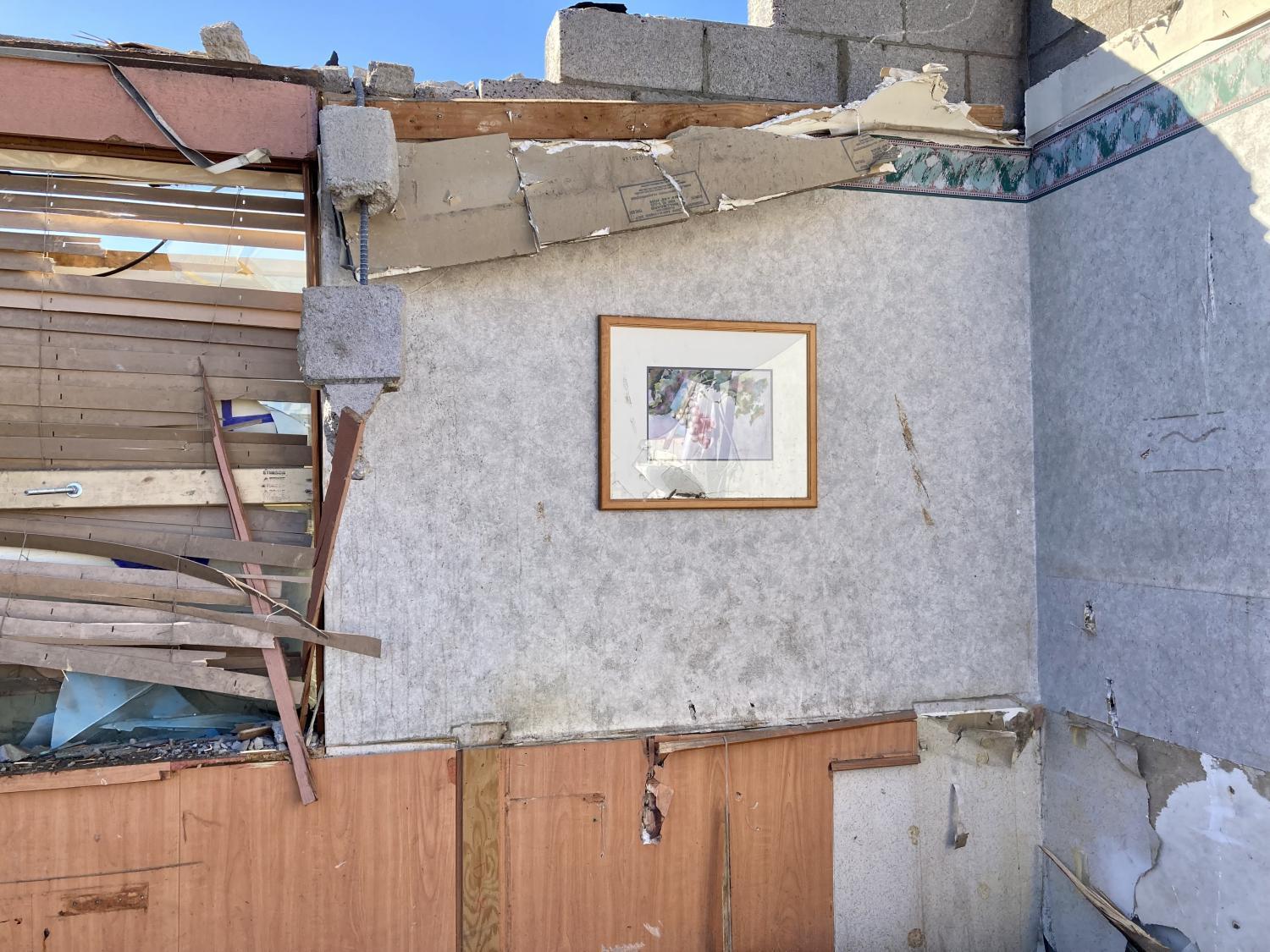 Devin Breinholt
A cracked picture frame attached to a wall at the former Village Inn on Feb. 15, 2022.

The 27th Avenue project also includes more emphasis on enforcing city codes to reduce blight and the kind of problems documented at the former Village Inn. It’s the kind of activity, neighbors can cheer.