2 years after COVID-19, what does long-term care look like?

Download mp3 (7.56 MB)
Coverage of aging is supported in part by AARP Arizona 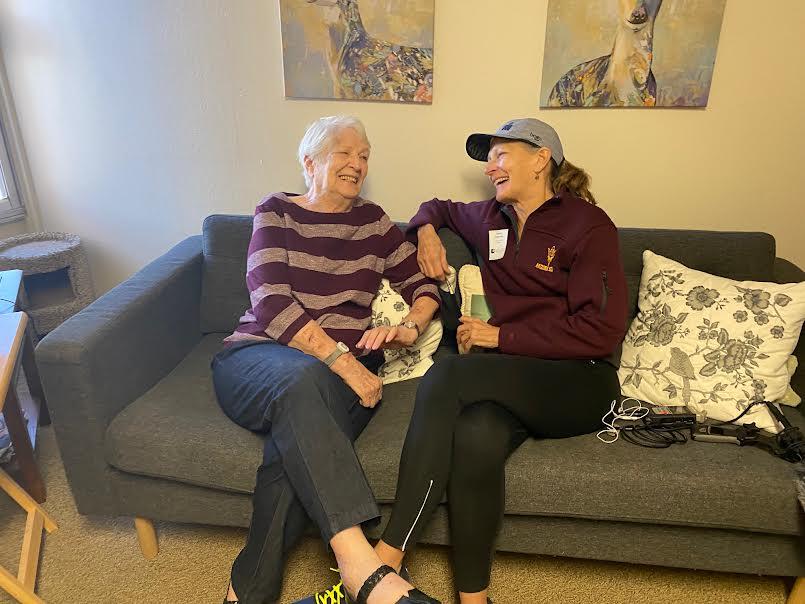 Kathy Ritchie/KJZZ
Diane Drazinski sits with her 88-year-old mother Alvine Sundin. Sundin now lives in assisted living, while her husband is in a Scottsdale memory care facility. "This is not what I anticipated from my senior years," she said.

On Jan. 21, 2020, the CDC confirmed the first case of COVID-19 in the U.S. We all know what happened next: Our lives radically changed. For residents and staff in long-term care, they endured shutdowns, COVID-19 outbreaks, staffing shortages and loss of life. So what’s life like now for those living and working in nursing homes?

Diane Drazinski takes the elevator to the third floor of the assisted living building at the Beatitudes Campus in Phoenix, where her 88-year-old mother, Alvine Sundin, lives.

She knocks on the door.

Bella, Sundin’s almost 1-year-old kitty, dashes out and into the hallway.

"Bells, get in there," exclaims Drazinski. Her mother laughs.

Sundin lives in a small studio apartment. There’s a kitchenette on one side of the room and a small seating area on the other. Sundin takes a seat on her twin-size bed that sits in the middle of the room.

That's because all of this, living alone in her studio apartment, was never part of the plan.

Their story starts in the summer of 2020, when Sundin and her husband were about to move into one of the independent apartments. At the same time, the state was in the midst of a surge of COVID-19 cases.

"On July 5, we passed the 100,000 mark. We have had a brutal June," said Gov. Doug Ducey at a July 9, 2020, press conference. Despite rising case counts, Drazinski and her parents decide to press forward with the move

"Initially, we got the patio apartment because we thought that would be better for my dad," says Drazinski. "But by the time we moved in here, it wasn't feasible."

That’s because Drazinski’s father has dementia and Sundin could no longer care for him by herself.

They had to place him in a memory care facility in Scottsdale.

"I walked my dad to the gate and he turned around and said, ‘See ya!” It was what three months before we could really see him and then I saw him through a gate," she says. "Sorry, emotional."

During those first few months of the pandemic, families were not allowed to enter long-term care facilities like the one where Drazinski’s dad lived.

Meanwhile, residents and staff were getting sick or worse, dying. PPE was in short supply and testing was a challenge. It could take days to get results.

Throughout it all Sundin struggled emotionally. At the Beatitudes, meals were being delivered to rooms and activities were put on hold.

"So, I think it was this really negative, perfect storm for mom," explains Drazinski. "She comes [to the Beatitudes] without dad. She's isolated. The only people she sees are my son and myself."

"She broke some vertebrae, she broke her wrist, and she had a big old contusion on her head," says Drazinski.

After rehab, Sundin moved into her studio. It’s a lot of change in a relatively short amount of time. And even though she can now visit her husband, COVID-19 still manages to disrupt life.

"Sometimes they close the whole unit down if there’s something going on and there’s a long period where I can see him," laments Sundin. "It's very sad. This is not what I anticipated from my senior years, but you, you have to adapt to what's out there." 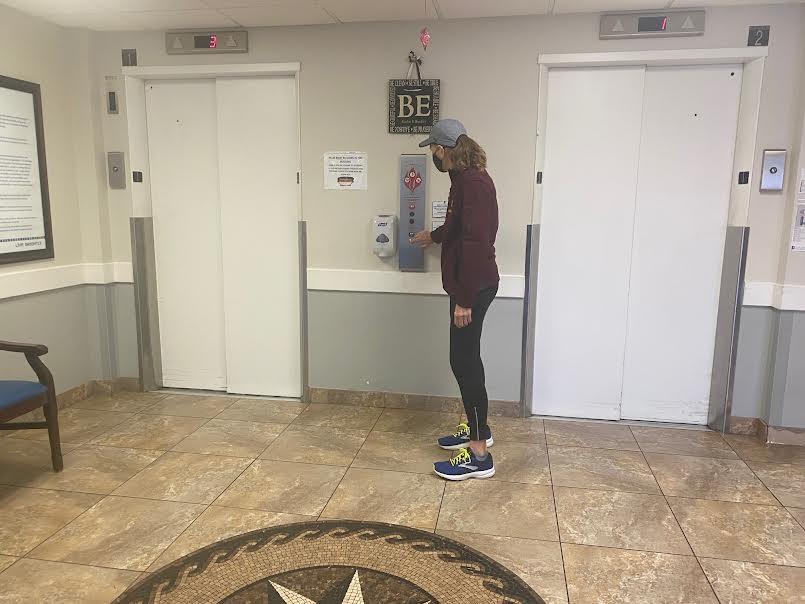 Kathy Ritchie/KJZZ
Diane Drazinski heads up to the third floor of her mother's assisted living building at the Beatitudes Campus in Phoenix. Her mother used to live in an independent apartment until she fell.

And it's not just residents and families who’ve had to pivot and adjust.

Jeffreys Barrett is the executive director of Wellsprings of Gilbert, a skilled nursing facility.

"Certified nursing assistants are the bomb diggity," says Barrett. "They are the backbone of our profession, in our segment of healthcare. But right now, people are stepping away because they're burned out. And it really has taken a toll."

And sometimes it means administrators like Barrett have to roll up their sleeves and get on the floor. But omicron is really beating down an already worn out staff. These days, Barrett also spends a lot of time comforting his people.

"Just being able to come into an office and have a soda or a piece of candy and just take a load off," he explains. "And some cry, some may cry when they come in."

Nationally, an estimated 280,000 direct care workers left the workforce within the first three months of the pandemic, according to PHI, an organization focused on strengthening the direct care workforce. Two years later, turnover remains high. There just aren’t enough people who want to work in this sector, despite thousands of job openings.

And it's not just caregivers who are in short supply.

Joe Kane is the director of dining services at the Beatitudes.

"Well, I'm currently short 51 positions in my department," he says.

So servers, cooks, dishwashers — and that has forced Beatitudes to close one of its dining rooms for dinner.

"It’s the end result of COVID, you know … so now we're competing for the few people that are left with everyone else," he explains.

As the omicron variant begins to wane, families and long-term care staff pray this is finally that light at the end of the tunnel … and not the light of another viral freight train.