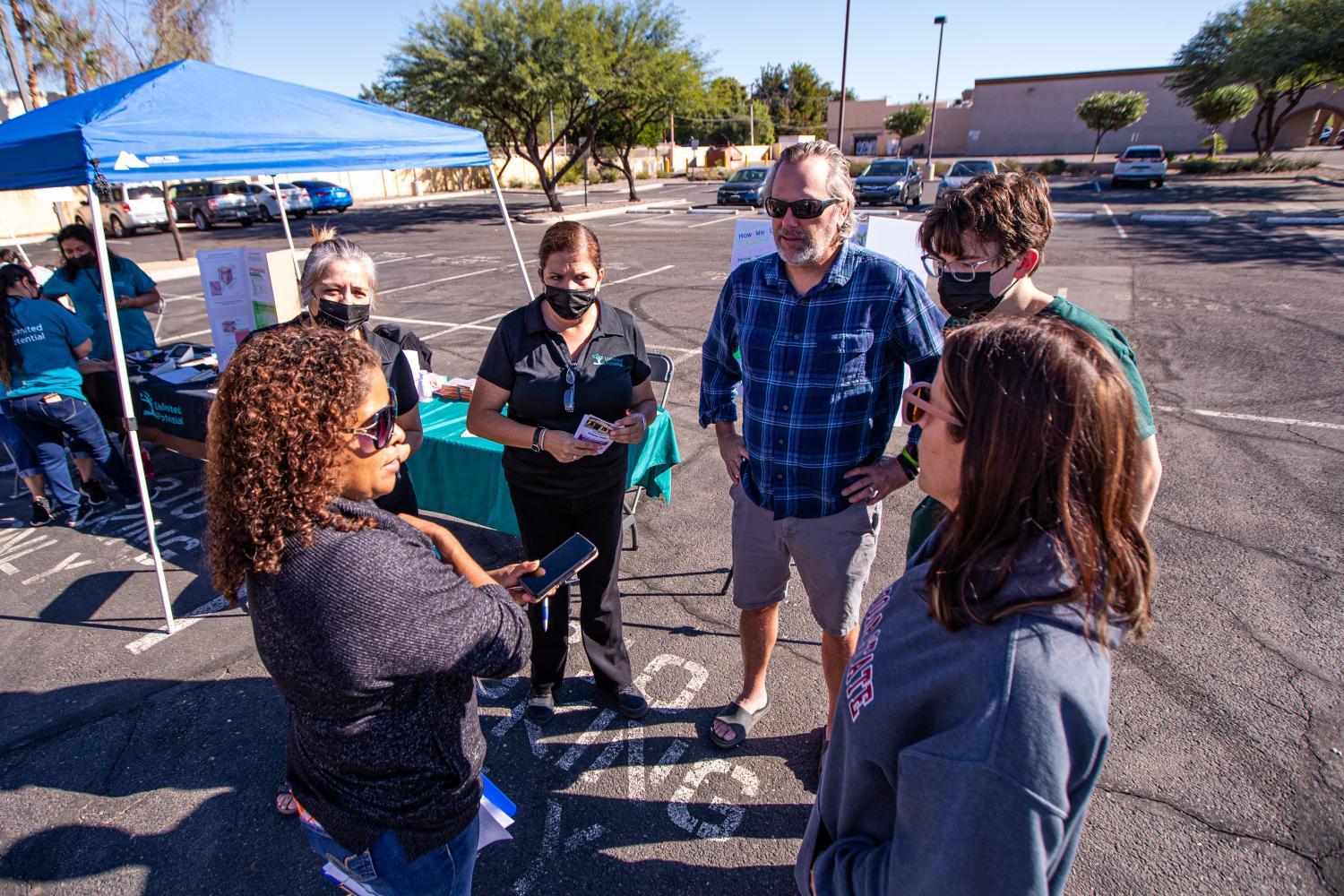 City of Tempe
Residents meet in a Tempe parking lot to discuss the future for the EnVision resource center.

In January 2021, a series of winter storms started hitting Texas. By the time they were over, millions were without power, leading to shortages of heat, food and water. Hundreds of people died.

Now, people in the Phoenix area are worried they could face a similar crisis from a prolonged heat wave.

On a cool Saturday morning last November in Tempe, people cluster in a parking lot surrounded by strip malls. At information booths and under shade canopies, they're talking about what they’d like to see in the vacant building at the center of the event. Some like Michael Roquemore envision bill and utility assistance, help for the homeless and mentally ill and overall just "a place where people can go for help." Others like Alejandria Gutierrez simply want information on things like food pantries.

"Is that going to be available here?" Gutierrez asked.

The weather is nice, but many at the event agree that when it gets hot, the neighborhood needs a place people can cool down, especially since Phoenix regularly sees 100 days each year of triple-digit-temperatures.

"There's no shade around here. Look at these trees. That's not a shading tree," Edward Damon said.

The city of Tempe’s director of sustainability is Braden Kay.

"So we have about a 1,600-square-foot building. We're looking at a sign here, 'Cafe Istanbul,' it used to be a Middle Eastern cafe," Kay said. 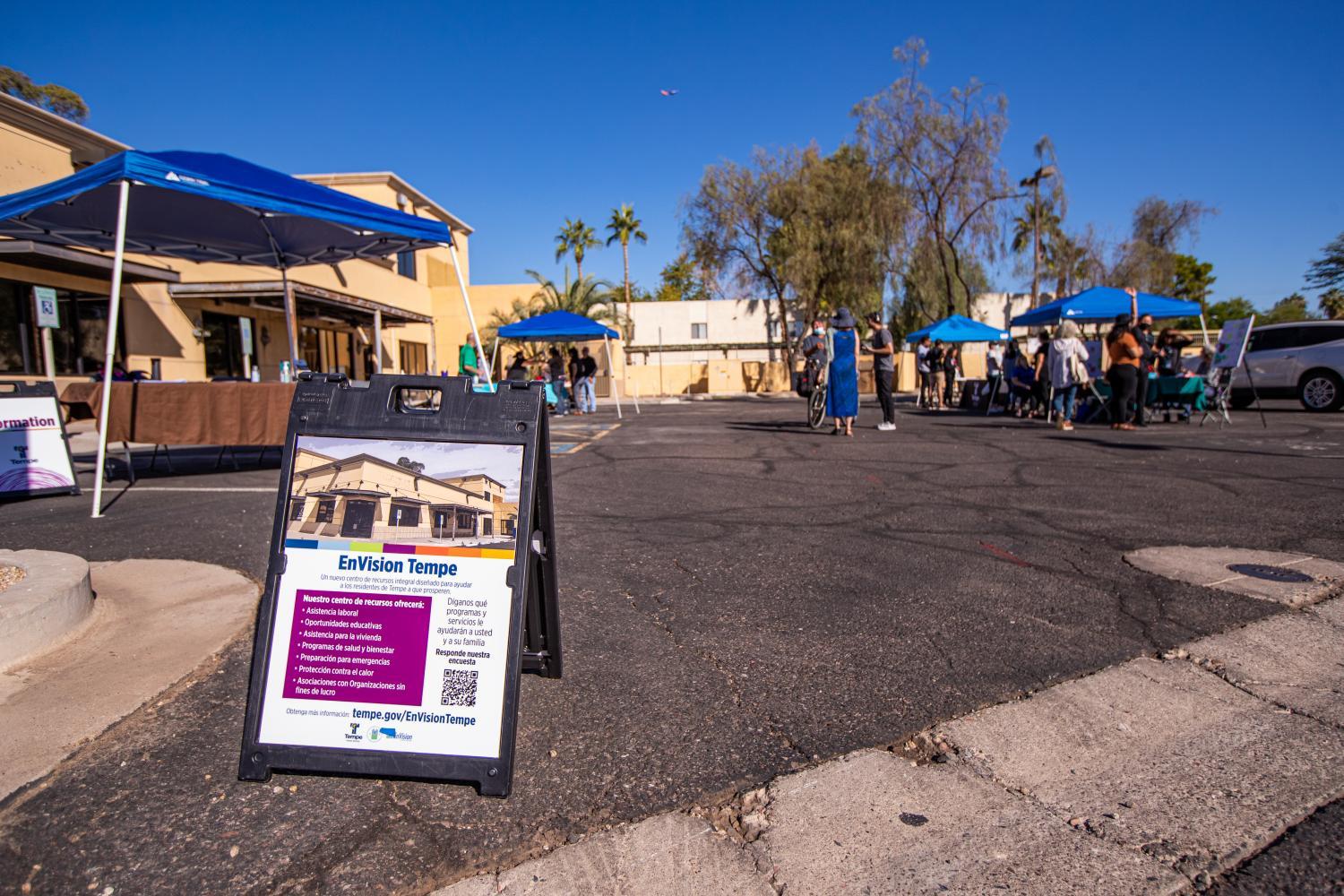 Kay and his colleagues plan to transform the cafe into the city’s first “resilience hub” — a year-round community center that can act as a refuge in a climate disaster. He says the concept is catching on across the country.

"There’s several cities like Austin and Baltimore and Minneapolis that we've had consult with us, and now that we've seen crises like the one in Texas, and in the Pacific Northwest, there's really an understanding of this heightened need for these emergency response centers in every neighborhood in the country," Kay said.

The city is investing $2.3 million in mostly federal funds in the center, part of it COVID-19 relief money. Back in the parking lot, Kay and his colleagues are trying to learn how the center can best offer services like housing and job assistance. But Kay hopes they will also learn what can bolster people's confidence in the building for it to shelter them from the heat.

"What's gonna make you trust this building in order to come here at nine o'clock at night if it's 112 degrees, and your air conditioning has gone out?

And Melissa Guardaro, a heat researcher at Arizona State University, has similar concerns.

Some experts warn of a so-called “Hurricane Katrina of extreme heat” in Phoenix. Imagine, a historic heat wave pushes temperatures to 110 degrees or more for five days straight — straining the power grid and causing outages all over town, meaning no air conditioning.

"We like to call that a cascading disaster," Guardaro said. "And it's not just the heat and the power, but your water will go out too."

One study estimated that such a catastrophic event in Phoenix could leave 1.6 million people injured or dead.

Kay says they aim to open the Tempe resilience hub this May, and eventually add backup power so its air conditioning can continue running if the grid fails.

"Our idea is that eventually, you should be able to be in a five- to 10-minute walk of resilience hub no matter where you are, but we got to start somewhere," Kay said.

An argument for resilience hubs is that having a place to go and people you trust nearby can be the key to survival in a disaster. Research from the 1995 Chicago heat wave shows more socially-isolated communities suffered higher death rates than those with greater social connection.

And residents like Dominique Parks, who’s 58, rely on power for more than just air conditioning.

"Definitely it would be a very good plus. I would be in trouble because I have to have oxygen. So that would even be double trouble for me if my electricity went out," Parks said.

This project in Tempe is an attempt to flip the script on disaster relief and aid in general, which can be top-down, very costly, chaotic and reactive — not preventive and community-based. The idea is to better understand what people really need.

The city plans to scout locations for future resilience hubs. It anticipates adding one to two hubs a year, creating more places more people can go to come together, where the AC can always run.

This story was adapted from the original Hear Arizona podcast series InHospitable, now available on Apple Podcasts, Spotify or wherever you get your podcasts.