A black-footed ferret at the National Black-footed Ferret Conservation Center in Colorado has become one of the first cloned, endangered animals to reach sexual maturity.

The stakes for successful breeding are high — and controversial.

Since the mid-1980s, conservationists have bred-back black-footed ferrets from the brink of extinction using a shallow gene pool of only seven animals.

The cloned ferret, Elizabeth Ann, comes from the cells of an eighth ferret preserved at the San Diego Frozen Zoo (SDFZ).

Opponents say cloning diverts funds and attention from efforts like habitat preservation, all for a tool with limited success and applications.

But Tara Harris, director of conservation and science at the Phoenix Zoo and Arizona Center for Nature Conservation — one of only six facilities in the world breeding black-footed ferrets for a reintroduction to the wild — says the endangered ferrets are good candidates.

“The black-footed ferret is highly endangered and has a well-established breeding and reintroduction program. But every individual on this Earth descends from only seven individuals, and that results in unique genetic challenges to recovering this species,” she said. “Cloning has the potential to infuse new genetics into this population that would otherwise be lost.”

That infusion of genetic diversity could help reduce risks of disease, infertility and genetic abnormalities. Still, Harris agrees it’s only one tool in the conservationist toolbox and not universally applicable.

“I think cloning may not be the answer for conserving a wide array of species, but several things make black-footed ferrets really good candidates for using cloning as one of multiple conservation tools to help the species,” she said.

Black-footed ferret cloning benefits from the species having an established breeding program and a close cousin — the domesticated ferret — that can donate eggs.

Phoenix Zoo was not involved in the cloning process or in providing the cells, which were obtained by SDFZ biologist Olivia Ryder from Wyoming Game and Fish veterinarian Tom Thorne in 1987. SDFZ would ultimately bank two cell lines: a male labeled Studbook #2 and a female named Willa. 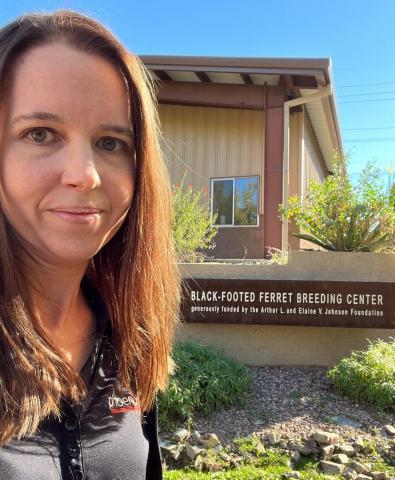 Phoenix Zoo.
Tara Harris is director of conservation and science at the Phoenix Zoo and Arizona Center for Nature Conservation.

“Thankfully, biologists had the foresight to create these cell lines long ago from other black-footed ferrets that didn't pass along their genes,” said Harris.

Revive & Restore, a nonprofit focused on using biotechnology to help endangered and extinct species, worked with a pet cloning company called ViaGen Pets as well as a commercial ferret breeder to create embryos from Willa’s DNA. They hope eventually to clone the male ferret as well.

But reaching sexual maturity, though a significant feat, merely marks the beginning of a long process for the ferret and her team.

“First of all, they hope Elizabeth Ann will be fully sexually developed for breeding this season — not all 1-year-old black-footed ferrets are,” said Harris.

Assuming that holds true, the experts at the Colorado facility will need to find an experienced breeding male that is a good genetic match, then hope the pairing goes well and produces kits that grow up to reproduce successfully.

“Oftentimes, even in ones that appear to go very well, the female doesn't actually get pregnant and then we have to keep trying or try other methods. Some facilities have tried artificial insemination in some cases,” said Harris.

Successful or not, whether conservationists can apply the approach to other animals will require more research and evaluation.

“I think the balance falls differently probably for every individual species because there's so many different factors that make it either a useful tool, or less so,” said Harris.