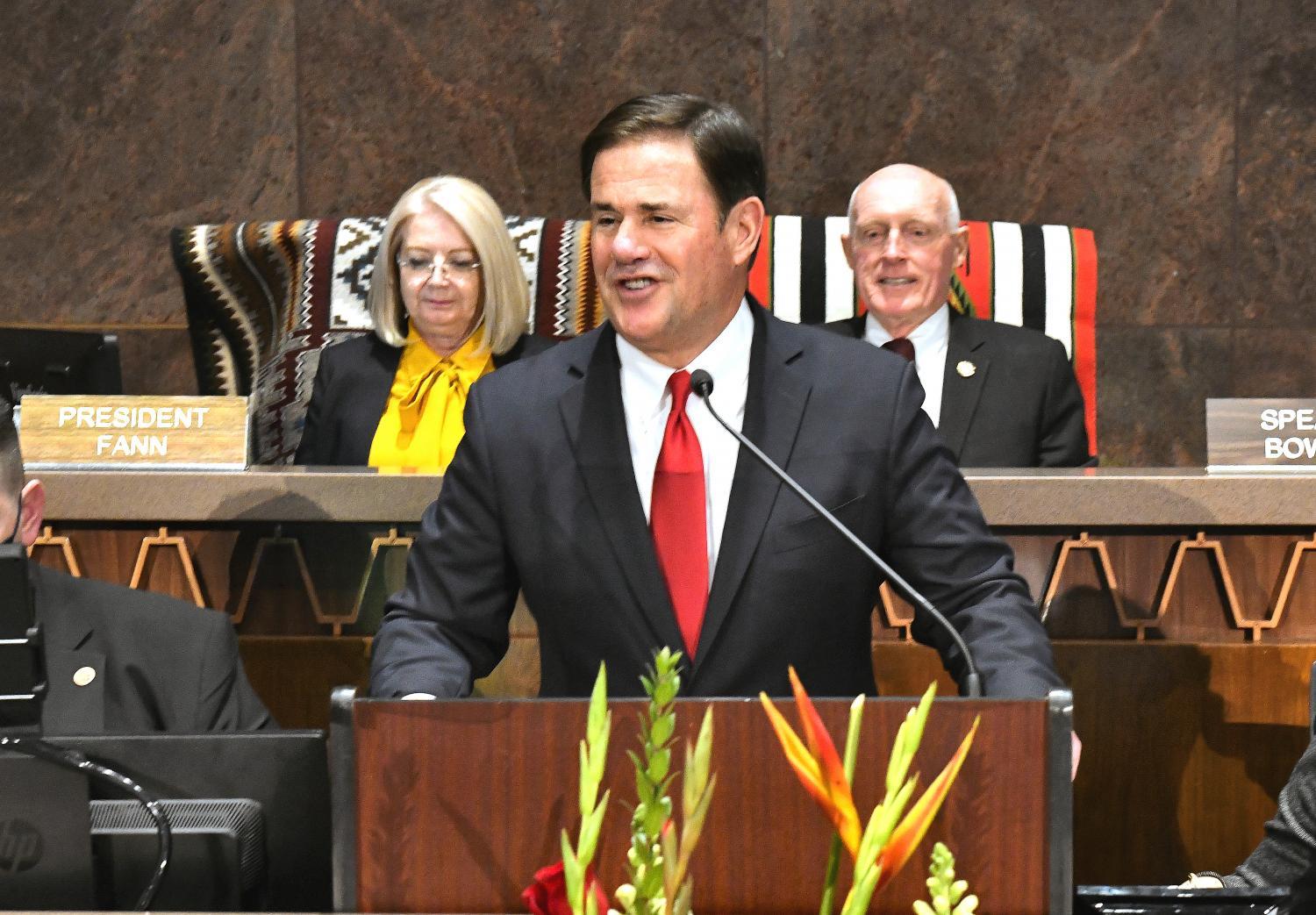 Last week, ahead of his eighth and final State of the State address as Arizona’s governor, Doug Ducey teased a “special” announcement when it comes to education.

On Monday, he delivered: A promise for a new summer school program, and a vow to sign any school choice bill sent his way by Republicans who control the state Legislature.

Yet the governor made no mention of any plans to boost dollars to K-12 schools, which by some metrics receive far lower funding than other states. Nor did he discuss a looming breakdown of the state’s K-12 funding formula, which, if left uncapped, could cost school budgets more than $1 billion.

Ducey said he wants to finish his second term in office strong, with a flurry of policy proposals, including a vow to once again cut property taxes, boost security at the southern border and transform Arizona’s water resources on a scale comparable to the Hoover Dam.

“No doubt, there will be challenges. In fact, some have said we can’t get much done this year: divided chambers; an election; why bother? I disagree,” Ducey said. “Let’s aim high and think big.”

One of Ducey’s priorities for K-12 education in his last year of office will be continuing to expand school choice options, which he said were a “lifeline” for some families during the COVID-19 pandemic. Ducey challenged legislators to bring him school choice bills to sign.

“This session, let’s expand school choice any way we can — greater open enrollment, new transportation models, more charter schools and more educational freedom for families, especially those in failing schools or who can’t afford to pick up and move to a new neighborhood,” he said.

He also pushed for measures against teaching critical race theory in schools, as well as requiring all curriculum and academic materials be posted online so parents, guardians and interested citizens can review.

Ducey also announced a new summer camp program that will focus on catching students up on reading, math and American civics.

But one thing Democratic House Minority Leader Reginald Bolding said was missing from this year’s State of the State address is what Ducey is going to do about the state’s aggregate expenditure limit for public schools. If it’s not increased by March 1, Arizona school districts will need to cut about $1 billion from their budgets this year.

“Most public schools will face a 15% cut in a few weeks and you need two-thirds of the Legislature to actually raise that limit. He didn’t mention it one time,” Bolding said after the address.

The spending cap became an issue in part because of a sales tax that generates over $600 million for education funding. It was previously exempt from the limit, but now counts toward it, according to a report by Education Forward Arizona.

The expenditure limit was also lowered this year due to the decline in student enrollment last school year.

The governor said Arizona has taken some steps to address the fact that hotter and drier conditions have cut the state's allocation of water from the Colorado River. That includes the 2019 Drought Contingency Plan and another $200 million last year to "invest in the water technology of the future."

But more is needed — think water from the Sea of Cortez.

"The need is clear," Ducey said.

More to the point, he said, there is an opportunity now, what with strong state revenues and a strong relationship with Mexico.

"What better place to invest more?" he said. "Instead of just talking about desalination, the technology that made Israel the world's superpower, how about we pave the way to make it actually happen?"

That, he said, will secure Arizona's water supply for the next 100 years.

On the issue of border security, the governor promised "significant new investments" to strengthen the border strike force, provide new equipment to aid in pursuing criminals, "and deploy the latest drone technology to bolster surveillance and stop the cartels in their tracks."

Ducey acknowledged that the issue really needs to be addressed from Washington. So he said he is crafting comprehensive federal legislation, including everything from a wall and virtual surveillance to increased resources to local communities "that have been devastated by these dangerous open-border policies."

But with the U.S. House, Senate and the White House under Democratic control, the Republican governor is calling on them to use their influence to force action by their colleagues by virtue of the fact that a single senator can bring the chamber to a halt.

"No member of the Arizona congressional delegation that actually cares about the safety of our communities should vote yes on any legislation until the president agrees." Ducey said.