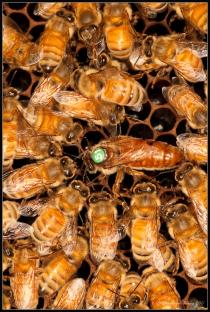 (Photo by Christofer Bang)
When the queen (numbered) digests her food, bacteria are broken down in the gut and stored in her “fat body.” These pieces of bacteria then bind to vitellogenin — a blood protein — and are carried to developing eggs.

Bee colony populations continue to drop because of several factors not well understood by scientists. However, new research may allow scientists to mimic how bees naturally vaccinate their young.

When bees travel outside the hive to collect pollen, they can inadvertently collect pathogens, such as bacteria and fungi, and bring them back to the hive. The pollen with pathogens is made into a “royal jelly” for the queen bee to consume as she prepares to lay eggs. Yet all the bees seem to be protected against most of these pathogens, which has stumped researchers until now.

ASU Professor Gro Amdam said it is the role of a specific protein in the queen that has often gone overlooked.

“A protein that was once regarded as a boring egg yolk protein that you can actually find in your eggs. This protein was in fact responsible for bringing fragments of the bacteria or fungus into the egg in a similar way as when we vaccinate children," said Amdam.

“This is a really exciting finding and unheard of finding that needs to get fleshed out," said University of Illinois Professor Gene Robinson. He points out bee populations have diminished by over 50 percent over the last decade from pathogens, pesticides, parasites and poor nutrition. While it focuses on pathogens, Robinson said this study could have huge impacts.

“If we are able to mobilize natural responses within the bee to be able to overcome some of these pathogens, that could be very helpful in strengthening bees in general and helping to diminish the losses," Robinson said.

Next steps for the research is to develop a mechanism to replicate the vaccination process to help bees combat pathogens that are destroying their colonies.