At a Mesa high school, teams of teachers come together to engage, support freshmen 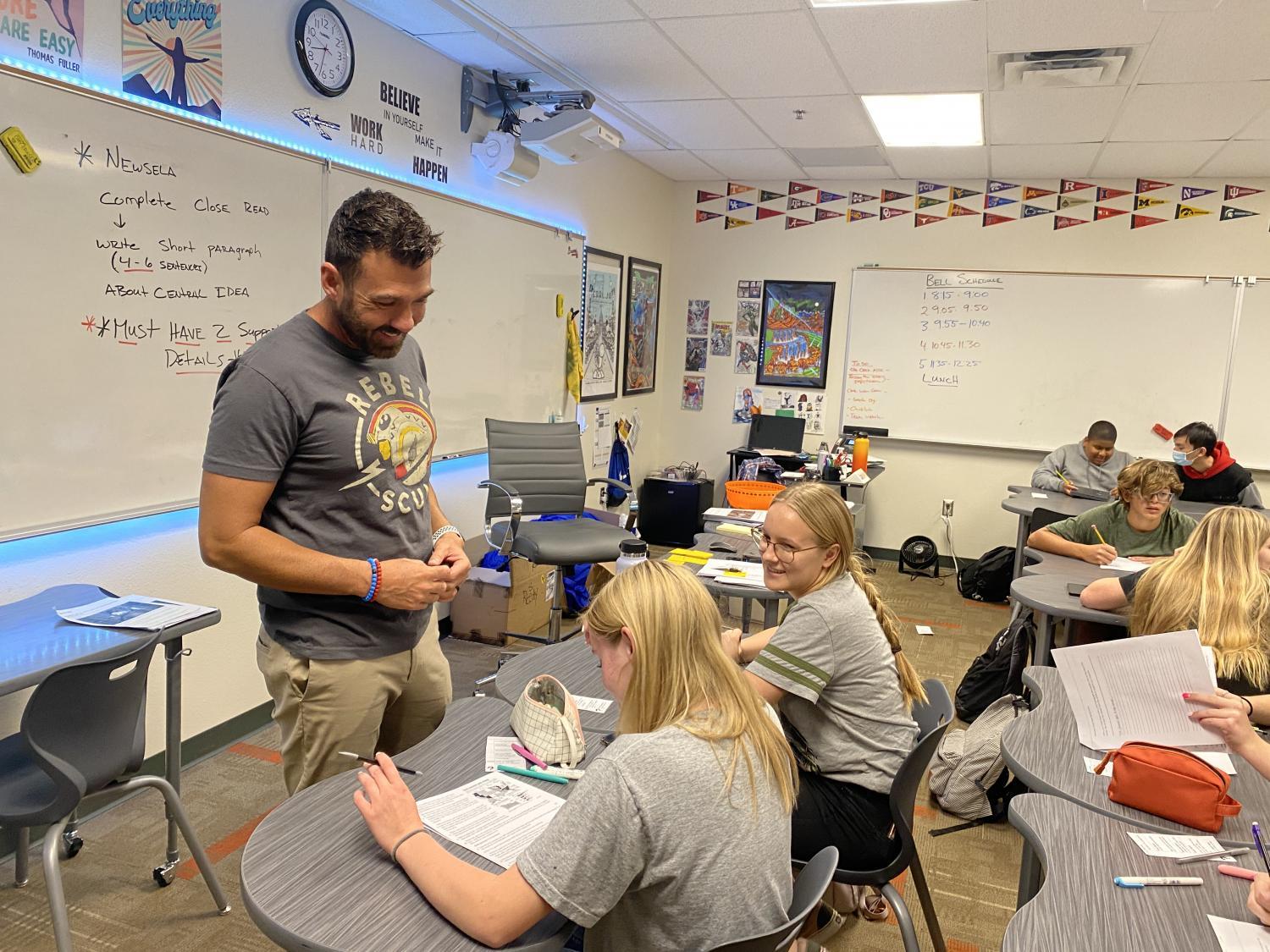 Rocio Hernandez/KJZZ
Shaun Reedy is part of a teaching team at Westwood High School in Mesa. He says this model is helpful because he gets to work closely to other teachers, and learn from their teaching styles and lean on them.

Isabela Rubio's first year of high school has been a little different than what she was used to in middle school.

For one, all of her four morning classes are located within feet of each other.

"In middle school, we had one class in one building and then in the other, but no I was surprised were right there," Isabela said.

She's noticed the proximity has created a different dynamic between her teachers then she's used to. 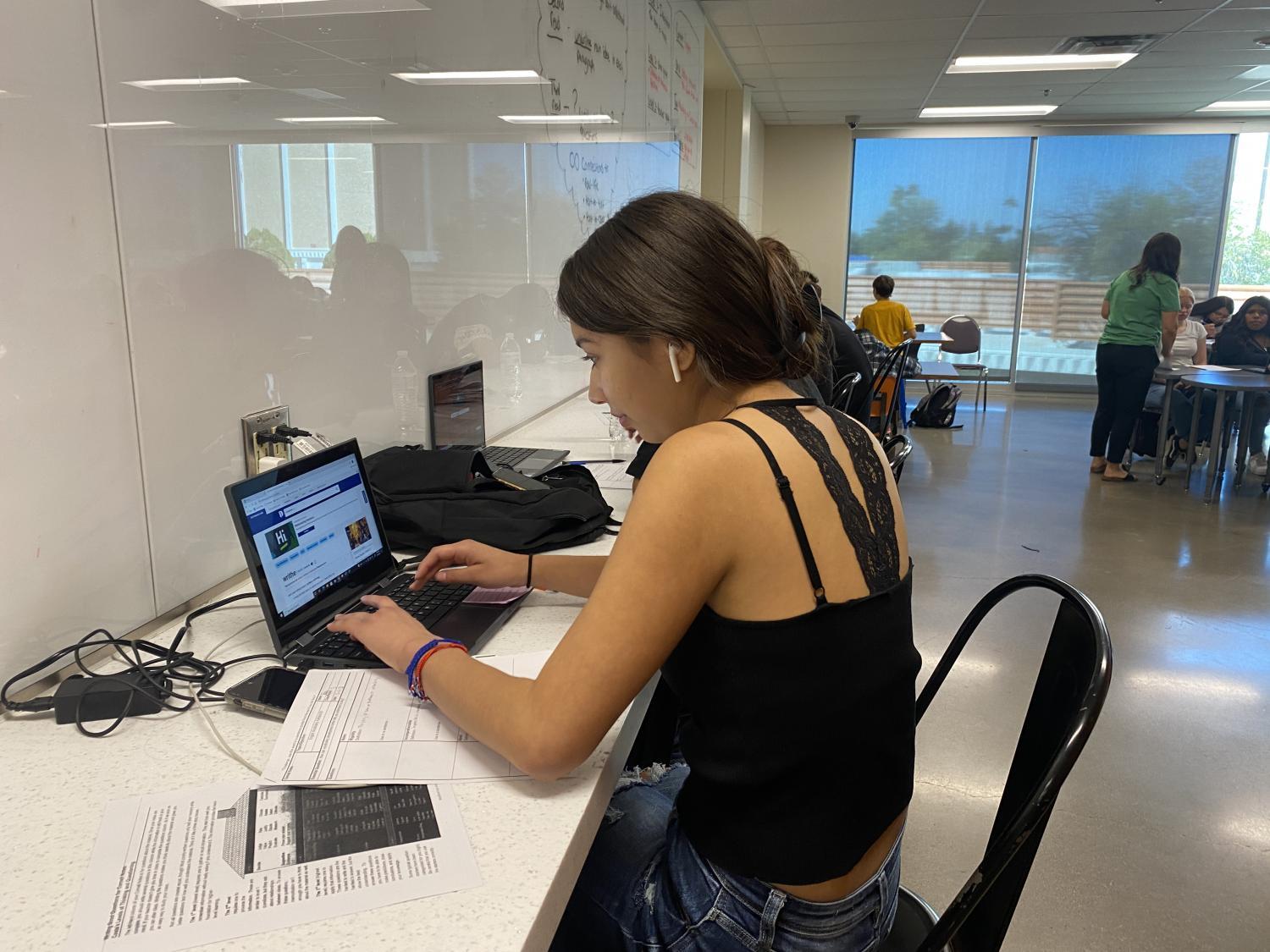 Rocio Hernandez/KJZZ
Freshman Isabela Rubio is studying independently in the extra class space that's part of her pod at Westwood High School. She says she enjoys the opportunity to work on assignments, and work with partners or independently.

"Most schools, their teachers don't even talk, unlike these," she said. "They're together all the time, they get along."

This design is not only convenient for Isabela and her classmates, its intentional as part of the experience that Westwood High School is hoping to create for ninth graders.

“We work really, really closely together," said Shaun Reedy, Isabela's career and technical education teacher. "We spend every afternoon as a team working coming up with a curriculum that can go between our four classes, but as well as addressing student needs for things in regards to education plans, discipline plans, as well as support structures that allow these kids to be successful.”

All of Westwood’s ninth graders are divided into a cohort of about 130 students who belong to a group of four core content teachers. Isabela’s cohort also includes an extra classroom area located across from others where students can study alone or in groups with the support of a fifth teacher, instructional strategist Kelly Owen. The classes are all scheduled on a four-hour block that teachers can divvy up as they see fit.

“So if the team realizes, ‘Hey, our students need some more time in math,’ then those teachers can say, ‘OK, let's do two hours of math today, and then an hour of English or 30 minutes of one and another 30 minutes of another content area,'" said Vice Principal Vatricia Harris.

The school began using this collaborative teaching model three years ago after it found issues with its graduation data.

"We only had about a 70% graduation rate and in looking at that data, we noticed that the students that failed any of their core classes in their freshman year were at a higher rate of not finishing high school," Harris said. 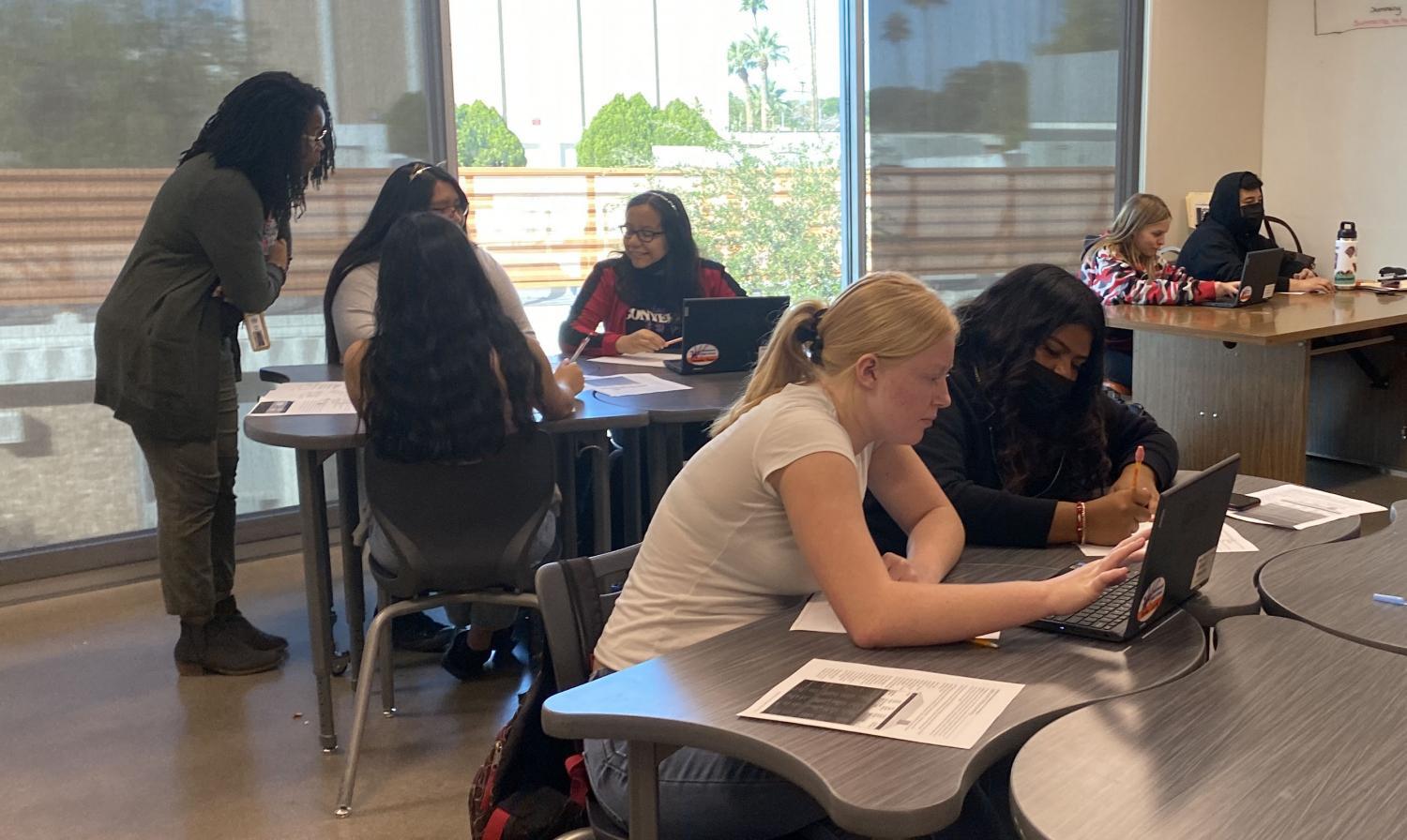 The school hoped to turn this around by encouraging more collaboration between teachers so they could better support students, but also work together to make their classes more engaging. The school has been testing this teaching model for the past three years with a small group of ninth graders, and Harris said they've already seen some success.

"Students were coming to the core classes, and maybe ditching their elective classes. But because we have the wraparound services, you go and you meet with those students, and you're like, ‘Hey, I need you going to all your classes, and we would help pull them in, we were able to do some intervention,’” Harris said.

Westwood decided to expand this teaching model to Westwood’s entire freshman class this school year to support students who have been impacted academically and personally by COVID-19.

"Some of them have not stepped on a campus," Harris said. "Families were probably going through some things. A lot of our students also lost parents and grandparents in the pandemic. So we knew that more eyes were going to need to be on them in order to help and support them.”

Isabela was one of the students impacted by the pandemic while she was still in middle school. 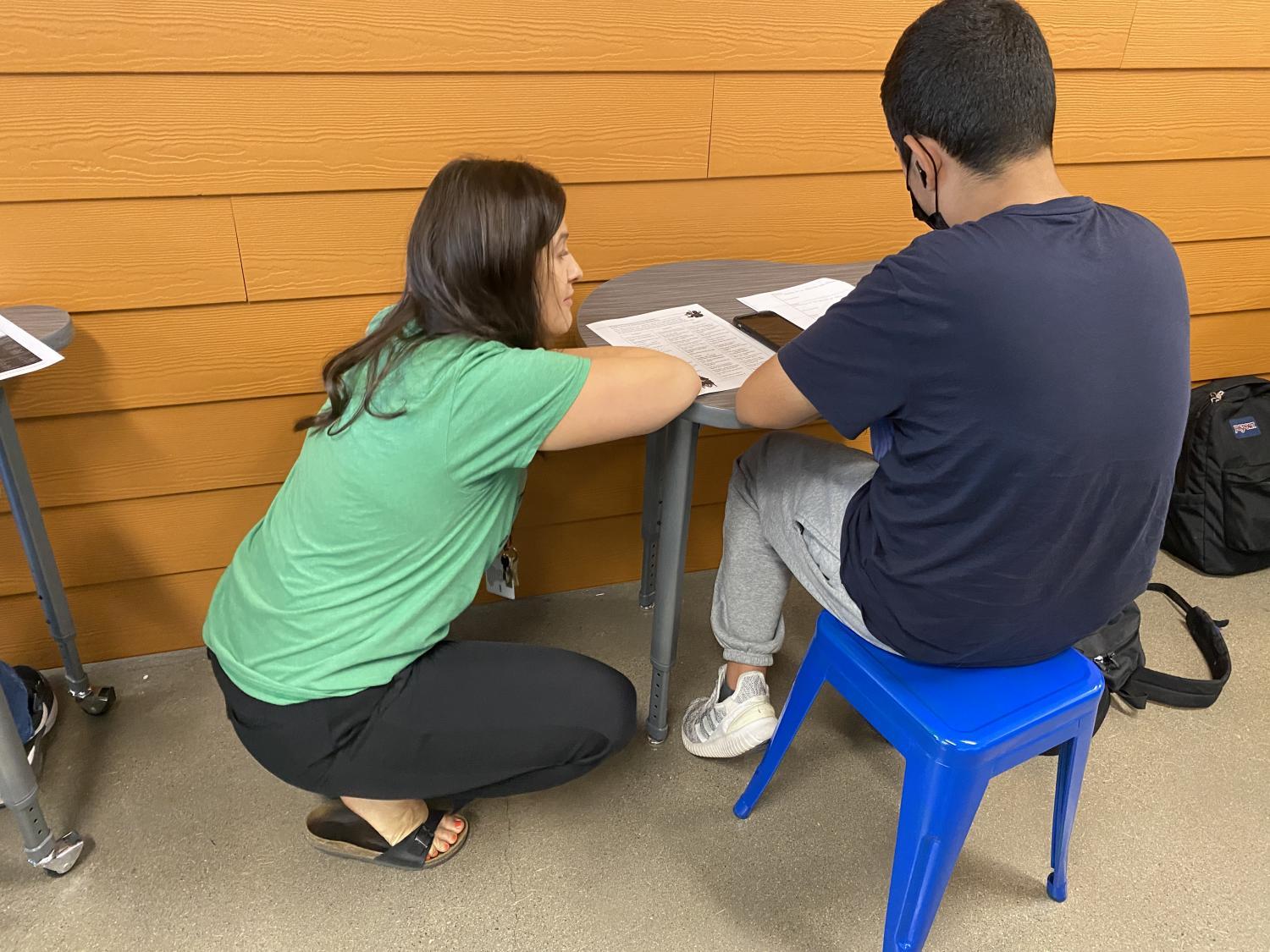 Rocio Hernandez/KJZZ
Teacher Kelly Owen provides instructional support to students as part of the team she is part of under Westwood High School's Freshman Academy.

"It was a mess because online school I didn't really understand anything, especially in math," she said.

But having all these teachers to work with has been good for her, she said.

“They do help us a lot and the extra block with Ms. Owen helps us do more of our work," Isabela said.

Isabela’s math teacher, Mikayla Strange, said the model is not only helping students recover academically from online pandemic schooling, but socially as well since they stay with the same classmates for all of their academy classes.

"This team setting really lets them know like, ‘OK, we're always going to be consistently around the same people all the time,’ and it allows them the opportunity to get those classroom people skills to show them like, ‘OK, well, how do you make friends?'" Strange said.

However, it's still too early to know for certain if this teaching model and the extra support has made an improvement on the students’ academic performance, but the school is encouraged by what it’s seen so far.

“Students just now are starting to kind of turn the corner," Harris said. "They're seeing and buckling down on their lessons.”

Westwood plans on continuing this teaching model for freshman next school year, and eventually expand it to all its grade levels. 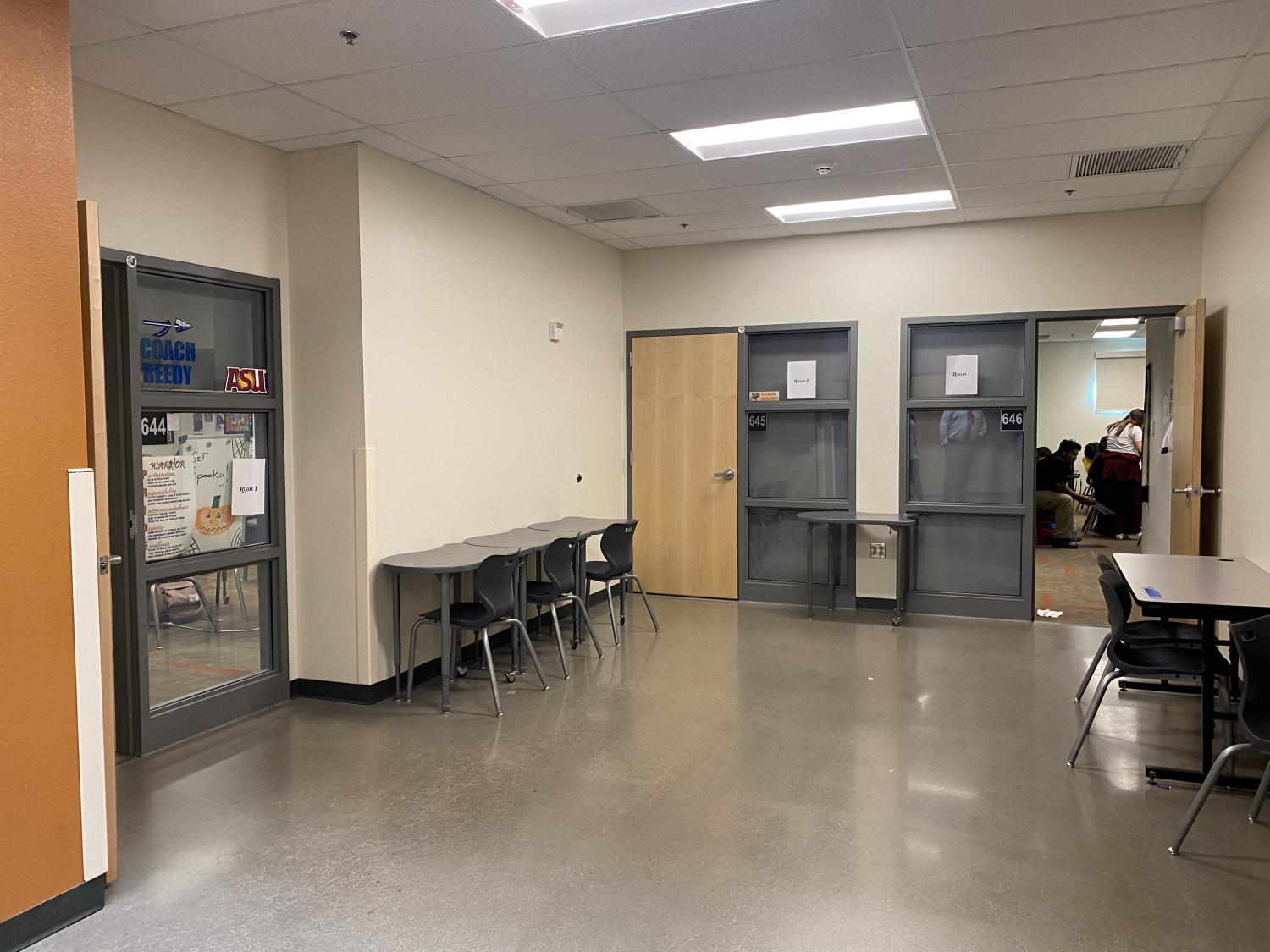 Rocio Hernandez/KJZZ
At Westwood High School, ninth graders' four core content classroom are grouped together in pods. The classrooms are feet away from each other so teachers can easily communicate and collaborate with each other. 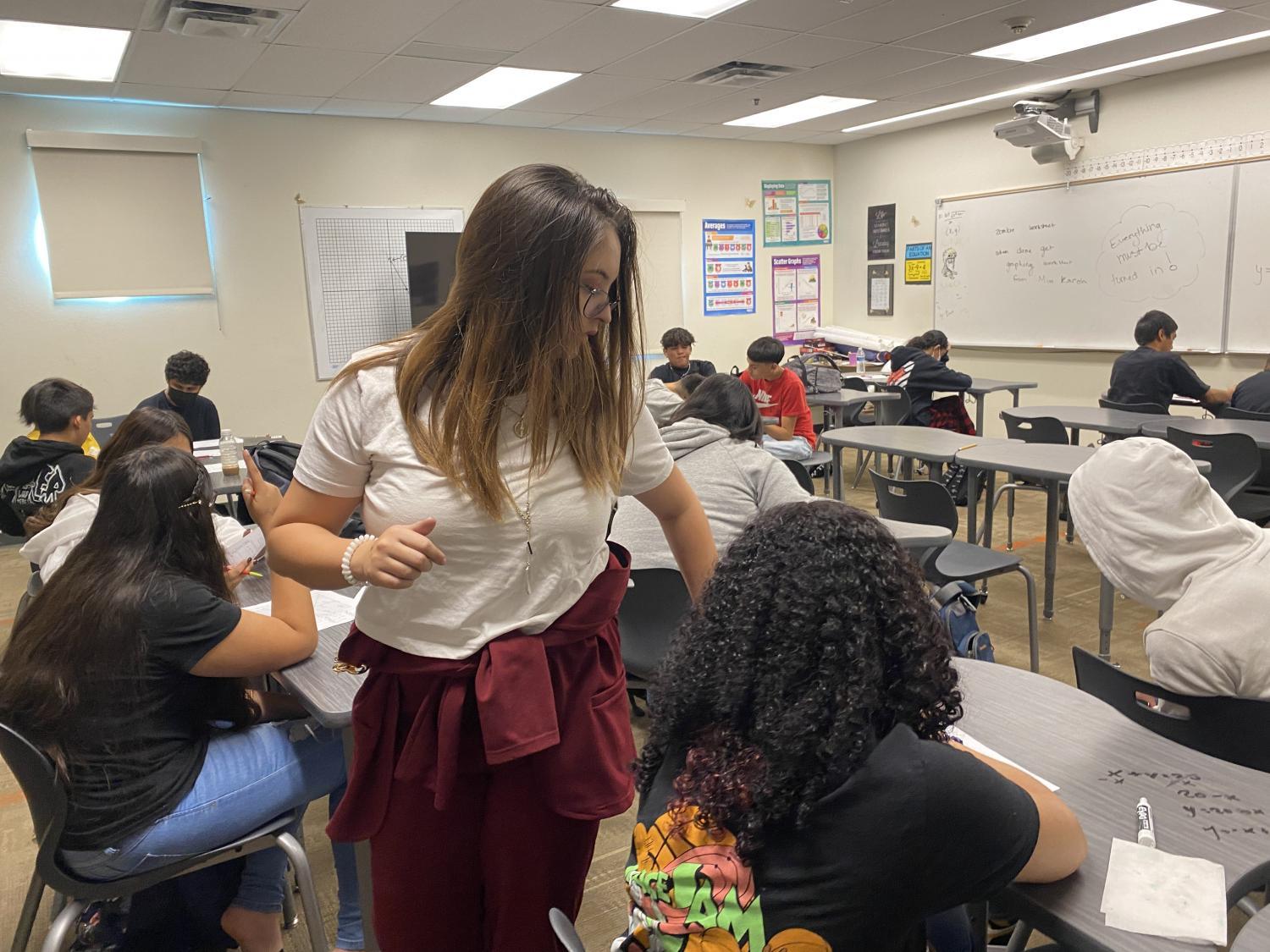 Rocio Hernandez / KJZZ
Mikayla Strange is helping a student in her algebra one class. Strange says this school year she's been working to help students who struggled with math during online classes due to COVID concerns.
Education