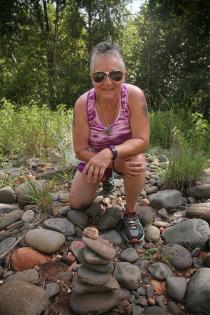 (Photo by Stina Sieg - KJZZ)
Beth Dinet gets a sense of peace and connection to nature from cairns. On her visit to Sedona from Colorado, she built several stone pillars. She says the spiritual vortexes there were on her bucket list.

(Photo by Stina Sieg - KJZZ)
Robyn Martin is on the other end of the cairn spectrum. She recently wrote an op-ed on the stone stacks - worries that the more people see cairns, the more they’ll want to build them – in increasing remote areas.

Beth Dinet was running her hands over the rocky river shore, and feeling for the perfect stones. Smooth, flat, easy to stack — and with the right metaphysical energy for a cairn. That’s the given name of those piles of rock you may have seen on the edge of trails.

They’ve used as used directional markers for millennia, but Dinet builds them for another reason entirely.

“I don’t know,” she said. “They just give an overwhelming sense of peace and connecting with oneness.”

Dinet was crouched on the banks of Buddha Beach, the kind of place where lots of people surely feel the same. Just outside New Age hub of Sedona, it’s a popular swimming hole and also considered a spiritual vortex. Dinet’s cairn celebrated that energy — and joined dozens of others left there.

“And when someone else walks this path, and they see these rocks, they know that ‘Hey, someone else experienced maybe the same thing or had the same thought as I did when I was out here,’” she said. “So it’s a unity.”

That would be a unity not felt by Robyn Martin, also at the beach.

“And someone might think I’m a crank — or at least curmudgeonly,” said Martin.

But for years, she’s seen cairns go from being navigational tools to becoming a kind of backcountry fad, popping up like mushrooms. And Martin’s irritation isn’t just about aesthetics. Moving rocks alters the landscape, she said, causing erosion and evicting insects from their homes. They can also confuse hikers, leading them astray.

“There are so many different ways to express yourself and be out in these wilderness areas with your family or by yourself where you don’t have to leave a reminder for someone else to find that you were there," Martin said.

She recently wrote as much in an essay featured on the website for High Country News magazine. The online comments were immediate — and blistering. Some readers agreed with Martin, but others wrote things like “go murder some kale” or “get a life, #istherearockshortage."

“I was completely blindsided by those,” she said. But it didn’t surprise author David B. Williams. He turned up similar passion while researching his 2012 book Cairns: Messengers in Stone. He said national parks, in particular, have been inundated by these towers of rock, from Maine to California to Hawaii.

And careless cairns go against the very nature of the stone columns, which Williams learned have been used on every continent to convey various messages.

It’s been this way for thousands, maybe tens of thousands of years, Williams said. That's why, even though he’s frustrated by many cairns, he also understands the human urge to construct them. On some level, he understands Beth Dinet.

Back at Buddha beach, she was topping off her cairn with a white rock, sparkling with a bit of crystal. She gets the environmental argument, she said, but feels her little pillar shouldn’t be compared to graffiti or litter.

“There’s worse things in life that you could do to make yourself feel good than stack some rocks," Dinet said.

And so the fad continues, one stone at a time.