Arizona wants to use more inmates as wildland firefighters — but at what cost to the prisoners? 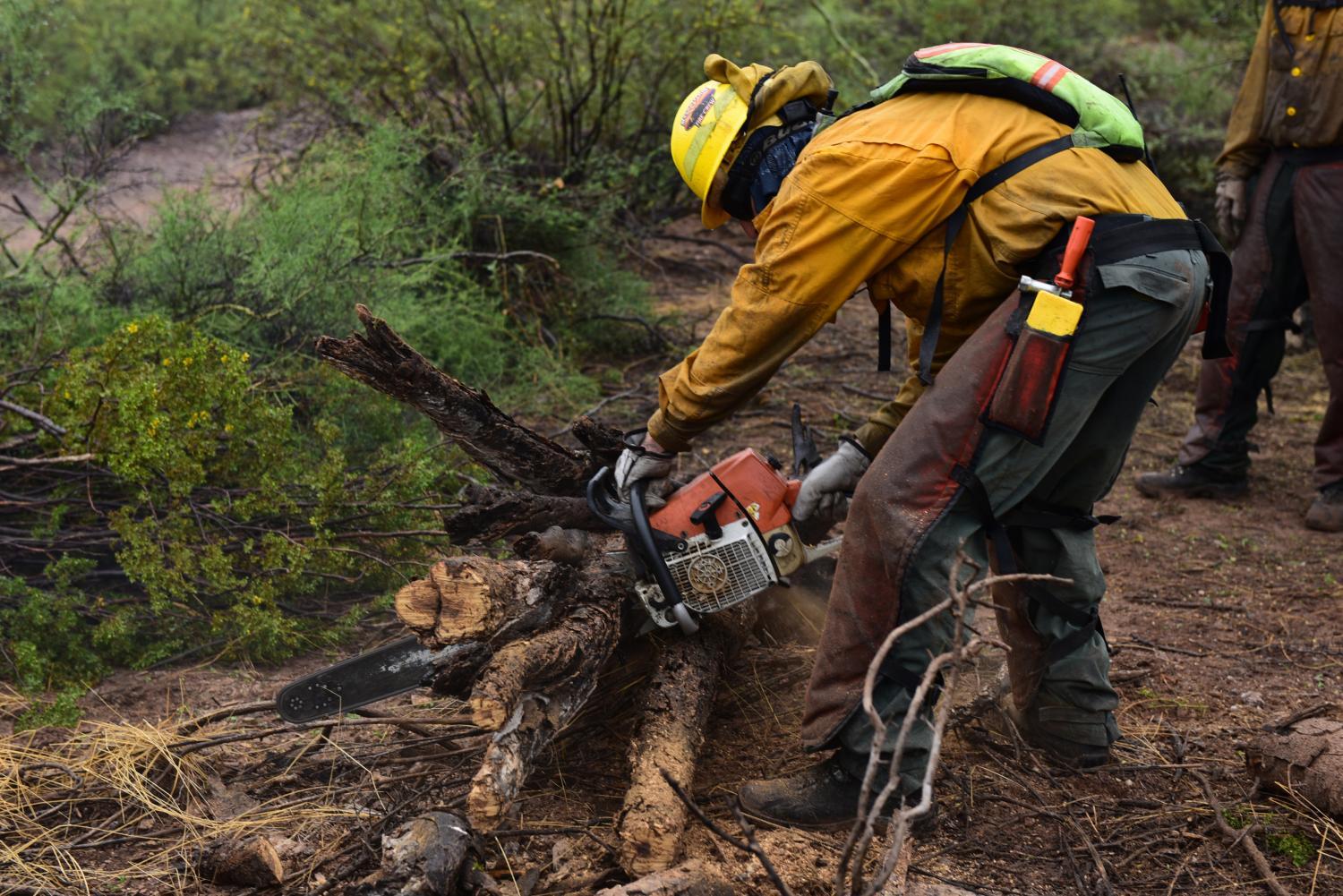 In late summer, a group of inmates cut brush in the desert near Lost Dutchman State Park, clearing weeds and low-hanging branches near homes, to make the desert less combustible.

“So our crews are trying to reduce wildfire risk, and also try to bring the desert back to a more natural state, that involves less ground fuel, and just a healthier condition,” said Russell Benford of the Arizona Department of Forestry and Fire Management. “They’re clearing out some of the more exotic vegetation that’s grown in. They’re pruning some of the native vegetation so that it doesn’t create ladder fuel. And they’re trying to create some space between patches of vegetation, so that fire couldn’t spread as easily.”

Wildfire is a natural part of Arizona’s landscape. Historically, small fires burned frequently in the West. But foresters have excluded fire from the land for more than a century. The amount of fuel in the forest has begun to build, and wildfires began to burn bigger and hotter. By the time foresters figured out they had a problem, it was too late for a quick fix.

State Forestry Director David Tenney told legislators at a committee meeting in February that the problem is getting worse.

In March, the state passed the Arizona Healthy Forests Initiative, which calls for the use of inmate crews to help thin fuel in the forest. Healthy Forests sailed through committee and Gov. Doug Ducey later signed it.

As the fires grow, so does the state’s population. Rural communities are pushing up against the forest. They’re crowding the high desert. This overlap between homes and forest is known as the urban interface.

A few years ago the Forestry Department did a wildfire risk assessment of more than 500 communities and found that most of them were at moderate to high risk for wildfire. 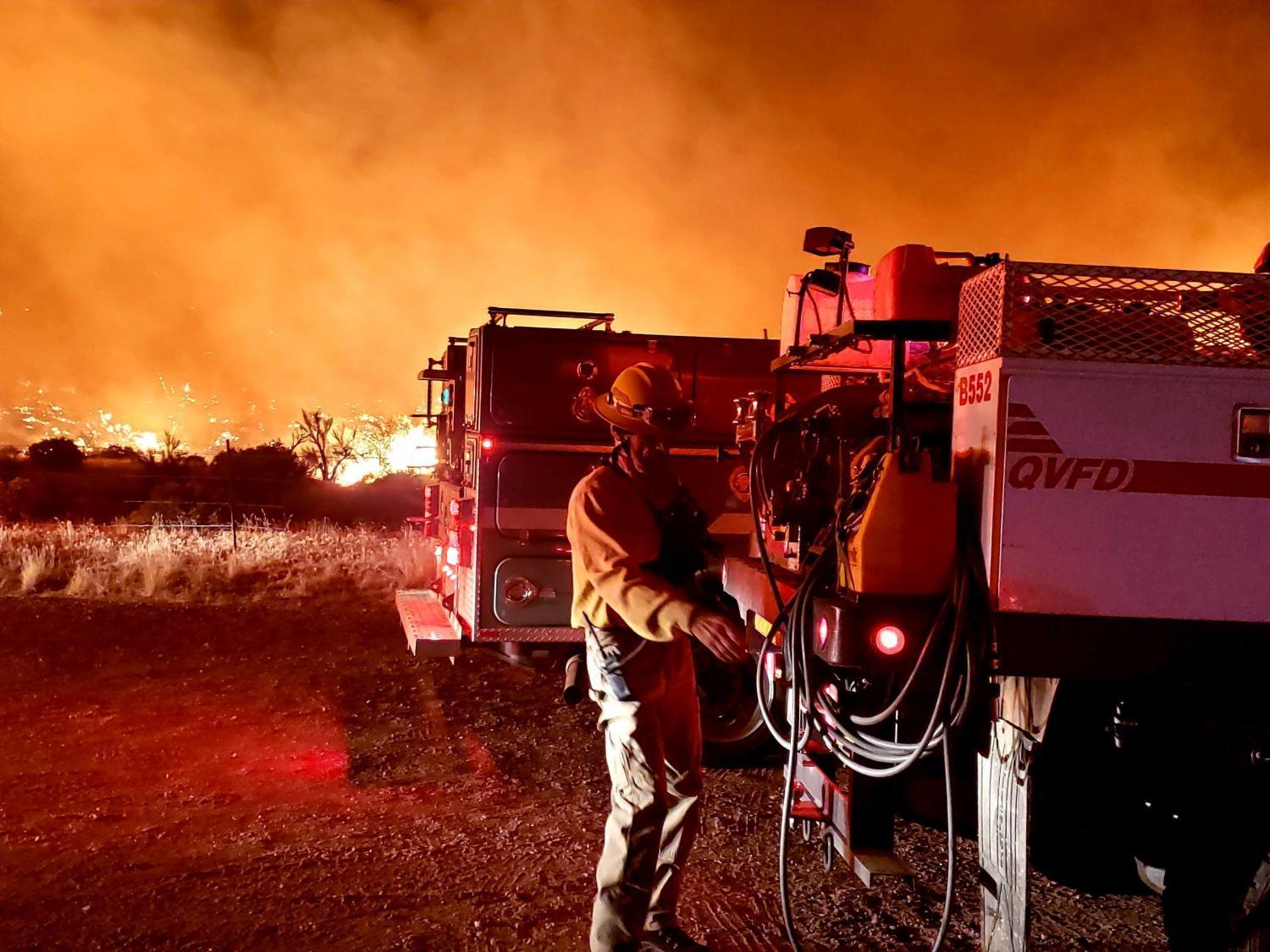 Inciweb
The Telegraph Fire in Arizona in 2021.

In June, the Telegraph Fire burned more than 180,000 acres, in spite of efforts by firefighters. The Fire burned close to Globe and Superior and took out several homes, including one that belonged to House Speaker Rusty Bowers.

“Our house burned down and our barns burned down and we basically lost everything above ground,” Bowers said, “the trees, the forest, the apple trees, everything burned. And it went in style, I mean it was, uh, it’s the Bowers ruin now, so.”

As the Telegraph Fire burned, Ducey called lawmakers into special session, in part to fund Healthy Forests. Arizona already has some inmate firefighting crews; Healthy Forests will expand their role.

“What the Healthy Forest Initiative allows us to do is really increase our capacity to do more,” said John Richardson, of with the Arizona Department of Forestry.

The goal is to thin 20,000 acres a year and provide job training for inmates. Early efforts will go toward protecting the urban interface. But a lot of acres that need treatment are on federal lands, where the state lacks jurisdiction. A recently expanded program allows government agencies to work together. The state has already begun to take advantage of it.

“We’re committed. We have a very incredible opportunity in front of us,” Richardson said.

Bowers says he wishes this kind of work could have been done in the Globe-Miami area.

“In my case, I would certainly have liked to have had an opportunity to clear the forest that was very close to me, and am unable to do so,” Bowers said. “So, now it’s too late. The forest is gone, my place is gone, barns are gone, studio’s gone, I mean, it’s gone.” 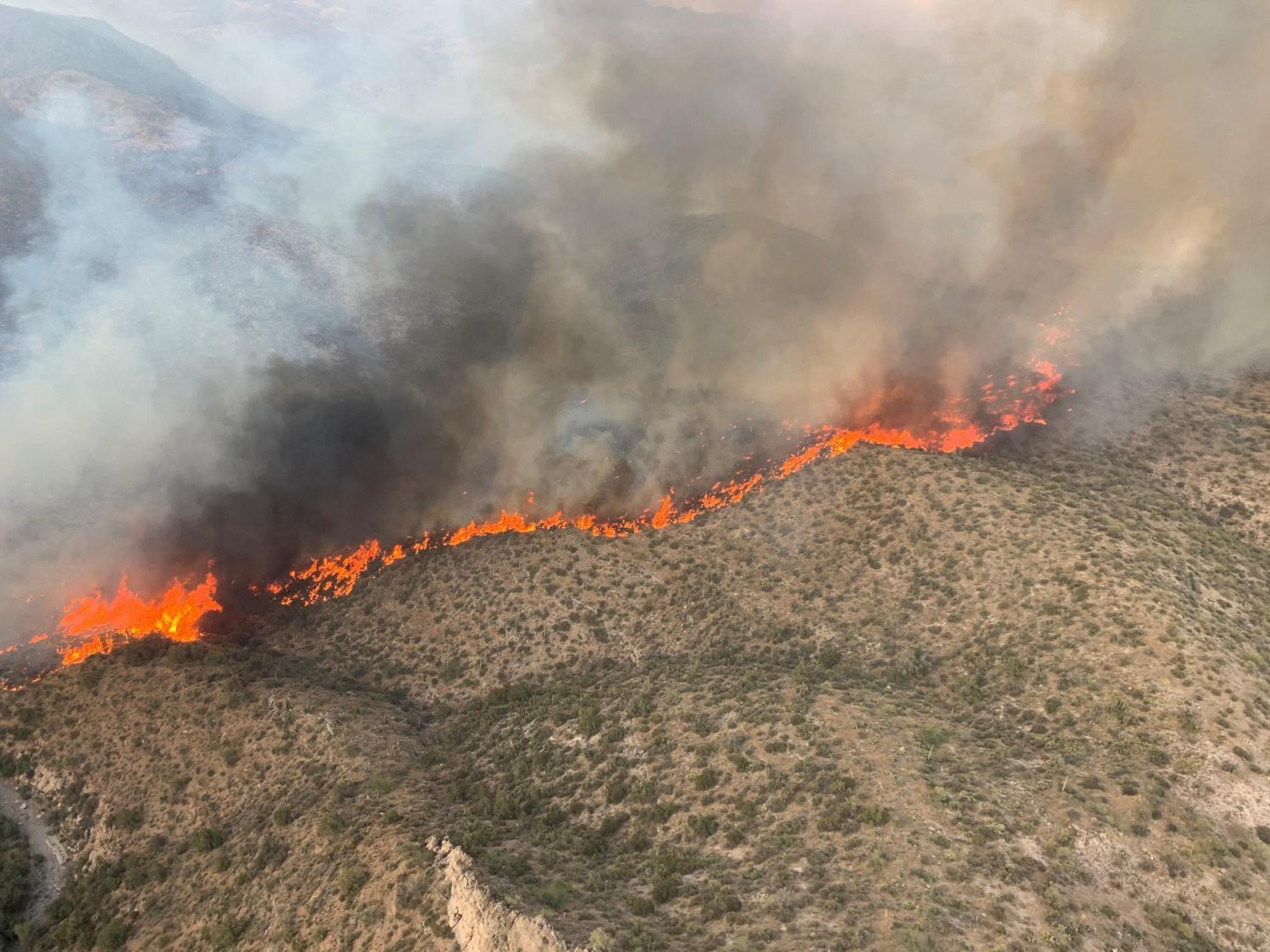 Inciweb
The Telegraph Fire, which burned near Superior and the Globe-Miami area.

But the Forest Service has struggled to thin Arizona’s forests for about a decade. It originally hoped to cut up to 50,000 acres a year, but it has only cut a fraction of that because it can’t find a market for the wood. It recently backed out of a bidding process to find those markets.

It remains committed to the Four Forests Restoration Initiative, but it’s not clear how it plans to proceed.

“We’ve seen for a long time that the scale of logging that the Forest Service wants to do, there’s no industry to achieve that much logging,” said Joe Trudeau, of the Center for Biological Diversity.

Which raises the question, can the state succeed where the Forest Service has not?

'Slave wages' and lack of opportunity beyond prison

Listen to Part II of this story 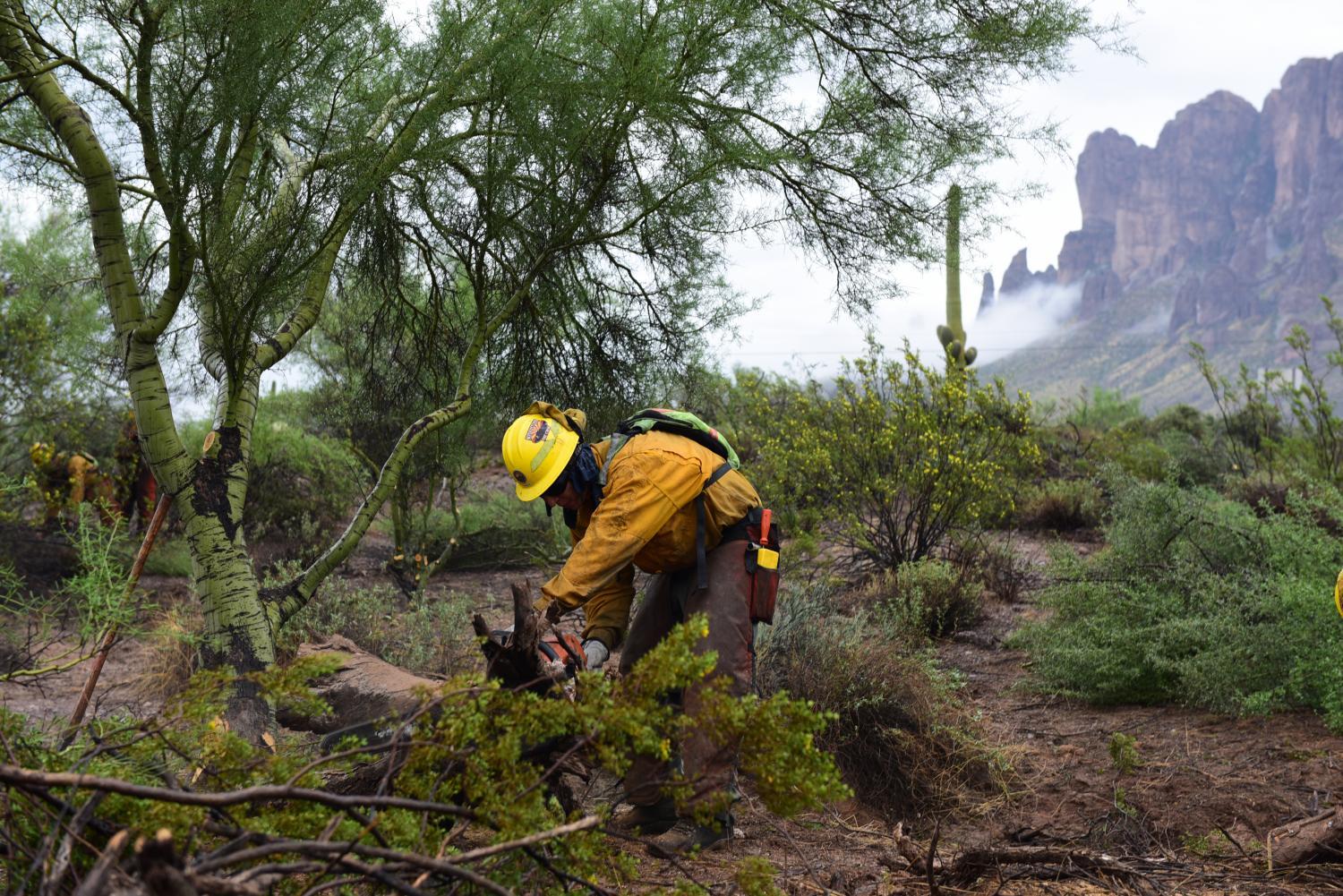 The Arizona high country was built to burn. The state’s ponderosa forests came up through centuries of fire, which took out brush and small trees. But land managers have excluded fire from the landscape for more than a century. There is too much fuel on the ground. The Arizona Healthy Forests Initiative will use inmates to thin some of that fuel.

The inmates earn a fraction of what their counterparts on the outside make, says Lindsey Feldman, who wrote a dissertation on inmate firefighters while at the University of Arizona.

“There is this idea of really slave wages, making $1-$1.50 an hour compared to $30, $40, $50 an hour by non-incarcerated people doing the same work,” Feldman said. The practice raises ethical concerns, but it’s complicated. For one thing, it’s legal under the 13th Amendment.

“The incarcerated firefighters were very aware of their place within the prison system, some of them stated the 13th Amendment right back to me and would say yep, we’re slave labor,” Feldman said. 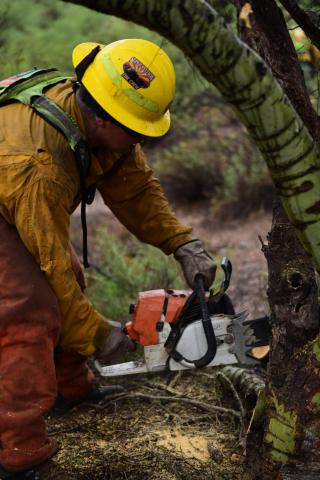 Ron Dungan/KJZZ
Inmates earn a fraction of what their counterparts on the outside make, says Lindsey Feldman, who wrote a dissertation on inmate firefighters while at the University of Arizona.

She said the firefighters did get some benefit from the program, but critics say that programs like this don’t necessarily translate to full-time jobs. Firefighting is seasonal work. Some jobs require degrees, and a background check. Legislator Andres Cano supported Healthy Forests, but he says the state needs to have more jobs programs for people in Arizona’s prisons, who struggle to get a GED, much less college credit. He said the state spends more on prisons than it does on its universities.

“I think the question ought to absolutely be is how are we preparing these inmates for that re-entry? Right now I think we’re falling short,” Cano said.

Arizona already has some inmate firefighting crews; Healthy Forests will expand their role. California has used inmate fire crews for decades. Fire adviser Lenya Quinn-Davidson says the program does not always translate to jobs for inmates.

“But one of the roadblocks historically had been that you can’t get a job in fire if you have this criminal background,” Quinn-Davidson said.

Inmates make up a large percentage of California’s fire crews, “and they really have become a critical piece of the puzzle,” she said.

But the steady supply of cheap labor has not solved California’s wildfire problem.

Fire historian Stephen Pyne says the devil is in the details. Thinning by itself may not be enough. The state also needs to bring fire back to the landscape.

“Everybody likes a new program, they like to build a new building,” he said. “They like to put a plaque on it. But people are less excited about boring maintenance stuff. And we’re talking about maintenance here.”

And the maintenance will be ongoing, beyond election cycles or annual budgets, or fire season.

“Well we’ve got a bunch of inmates, let’s put 'em to work and we’ll thin it out and we’ve solved the problem. You haven’t solved the problem unless you clean up afterwards. And then you will be cleaning up in perpetuity,” Pyne said.

The problem is what to do with the wood that inmates cut. Follow-up treatments will be critical.

“It’s not a one-time program that you sweep through with some cheap labor, and now the problem is solved. That is the first of a series of steps,” Pyne said. 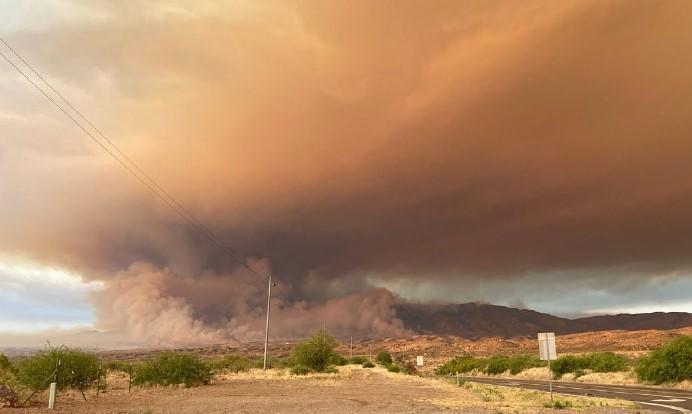 The Four Forests Restoration Initiative, known as 4FRI, has struggled with mechanical thinning for about a decade. The Forest Service recently pulled out of a bidding process to hire contractors to process the wood it cuts. The agency has renewed its commitment to 4FRI, using a variety of different strategies for different forests.

“So, it’s a wakeup call, to all of us, that we can’t log our way out of the current fire problem,” said Joe Trudeau of the Center for Biological Diversity.

Although foresters would like to log more, a recent reports suggests that they are reaching some of their goals through burning.

Trudeau said that small-scale logging can be targeted so that “we can expand the role of prescribe fire, because that is much lower cost per acre, than any form of mechanical fuel reduction.”

The numbers suggest that no matter how much Arizona thins the forest, or who does the work, fire will still have a role to play.

Science Sustainability Wildfires
Listen to Part I of this story