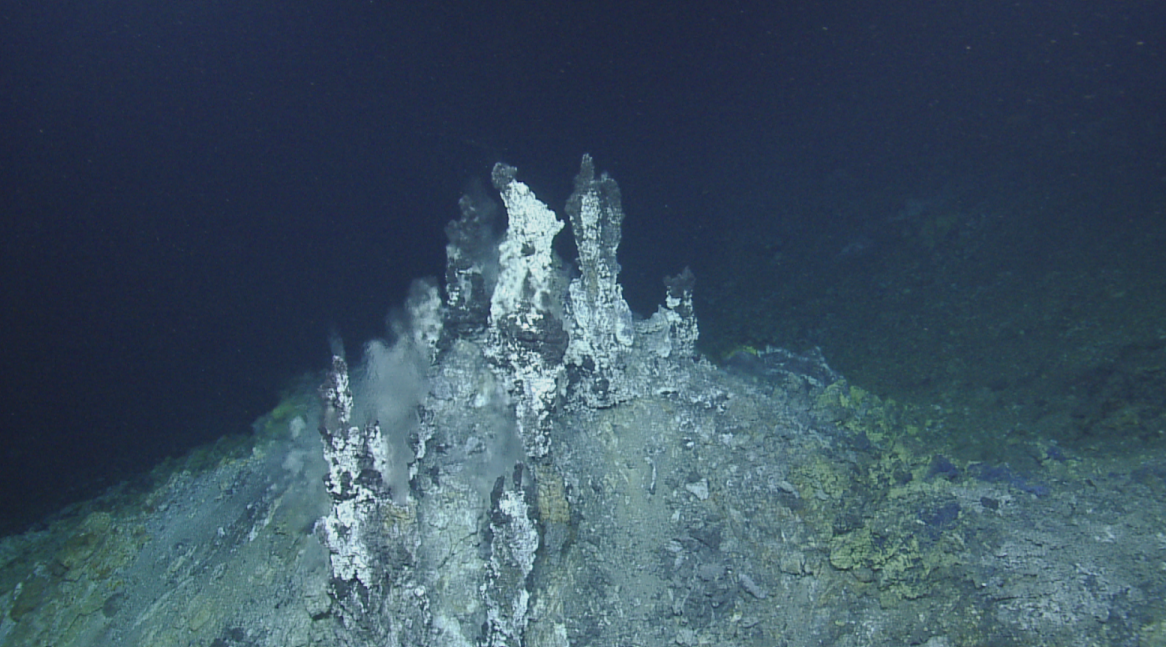 Photo by Ocean Exploration Trust.
A chimney structure from the Sea Cliff hydrothermal vent field located more than 8,800 feet (2,700 meters) below the sea’s surface at the submarine boundary of the Pacific and Gorda tectonic plates.

Microbes living near deep sea geysers along features like the Mid-Atlantic Ridge thrive in low-oxygen settings where the Earth shoots blazing-hot liquids into near-freezing ocean waters.

A paper in the Journal of Geophysical Research: Biogeosciences offers new clues as to how.

“The key to the whole story about the support of life around these systems is, even though that water started out as seawater, it has been changed dramatically as it reacts with the rocks and pours back out,” said co-author and ASU geochemist Everett Shock.

On the oxygen-rich surface, life’s molecular building blocks are made by expending energy supplied mostly by the sun.

But in the sunless, oxygen-poor ocean depths, methane-making microbes called methanogens turn that balance on its head.

“The very idea of organic compounds or biomolecules being more stable than inorganic stuff like carbon dioxide and hydrogen seems very strange to us, because we live at conditions where that just isn't true,” said Shock.

For them, assembling amino acids and proteins actually makes energy. Shock attributes that to the energetic chemical soup flowing like a smorgasbord from undersea geysers and volcanoes.

“At no energy cost to you, this conveyor belt of food is appearing constantly.”

Instead of chafing dishes and sushi plates, the microbes sample a buffet of methane ingredients the energetic environment prevents from reacting on their own.

“The microorganisms, if they were speaking, they would say to the Earth, ‘Thank you very much for handing me this CO2 and hydrogen; that's exactly what I eat! I’ll produce the methane and gather the energy that's released,’” said Shock.

He said this combination — surviving under extreme conditions using commonplace chemistry — offers additional hope of finding life in a wide a variety of environs on Earth and elsewhere in the universe.

“Inside many planets and moons in our solar system, and perhaps exoplanets beyond, it might be a really ordinary thing, because ordinary planetary processes seem to make life very possible.”