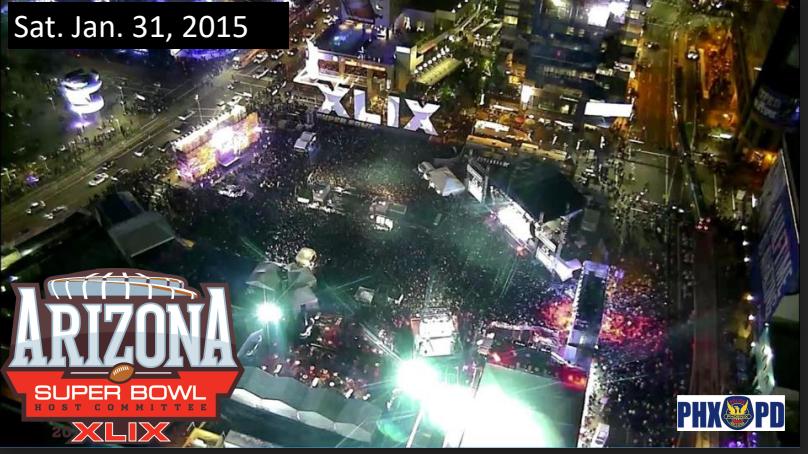 City of Phoenix
The Phoenix Police Department wants to replace the security camera system in the city’s downtown core.

The Phoenix Police Department wants to replace the security camera system in the city’s downtown core. The goal is to have quality video available before Phoenix hosts Super Bowl events in February 2023.

Thanks to federal grants, Phoenix installed 60 cameras to cover Seventh Street to Seventh Avenue, from Jackson Street to the I-10 freeway. But that was more than 10 years ago and the rules to get those specific dollars changed.

On Wednesday, Cmdr. Brian Lee shared images from different cameras with the city’s public safety subcommittee. He described a sample shot from a permanently mounted camera on the Jefferson Street garage.

“As you can see, it’s very poor quality, very cloudy, and it’s extremely difficult to obtain or describe any key identifiers for public safety if we were looking for anything specific,” he said.

Lee said cameras on three sections of the Maricopa County Superior Court building no longer function, and only 25 cameras in the downtown core remain operational.

“The cameras that we are currently purchasing now, they do increase in terms of their clarity and their quality of the image, but we are not associating those cameras to use by facial recognition,” Lee said. “We do not own the software in order to conduct that type of video processing.”

He said the cameras would record video, not audio, with images stored for 30 days. Garcia asked about access to the cameras.

“It would be our central monitoring station employees that can see that and manipulate the pan, tilt, zoom options on the camera or if we’re managing a specific event or incident in the downtown area, our threat mitigation unit has access to those cameras and can actually pull up the video footage and can see it either remotely or from an emergency operations center.”

Garcia, the only subcommittee member to vote against the project, reminded the group that the U.S. Department of Justice is investigating the Phoenix Police Department for potential civil rights violations and questioned whether there was an adequate system of checks and balances to ensure no bias when using cameras.

Lee said the department’s Homeland Security Bureau’s manual covers use and access policies and any allegation of misuse would be investigated by the department’s Professional Standards Bureau.

The first phase is expected to cost $600,000 and the full project more than $1.6 million. The subcommittee will recommend the full City Council approve the project with funds coming out of the Police Department’s budget.