Families reunite as U.S.-Mexico border restrictions lift, but some are not so lucky 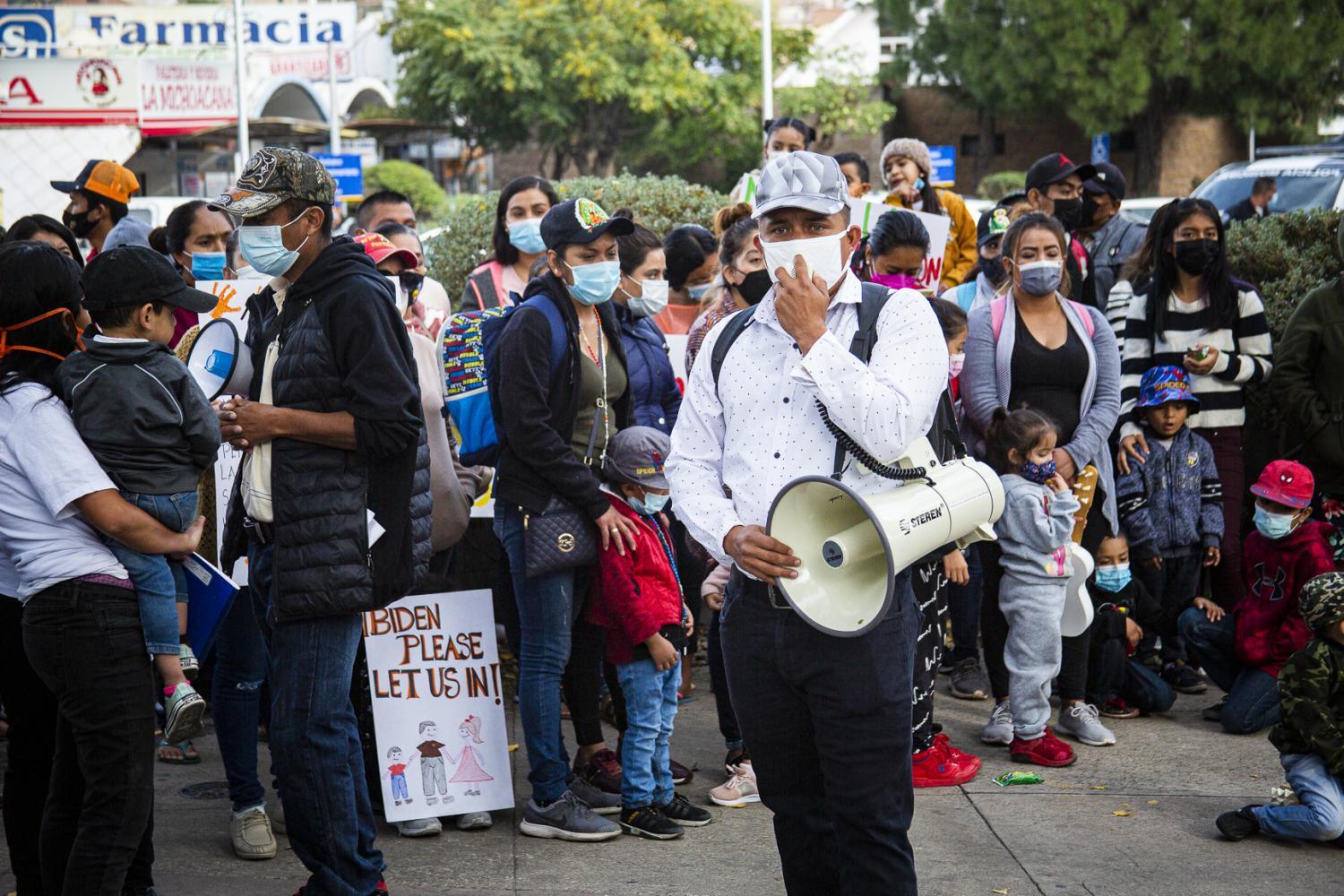 Murphy Woodhouse/KJZZ
With chants and speeches, asylum seekers and allies held a rally near the downtown Nogales port of entry the same day crossing restrictions were lifted to call attention to their ongoing expulsions under the Title 42 policy.

Some of the things people missed most during the more than 19 months of border travel restrictions were the simplest.

For Manuel Lopez and his wife Maria Tonita Becera de Lopez those included their weekly shopping trips north of the border — only complete with a Denny’s breakfast.

“Every Friday I took my wife to do her shopping in Nogales, Arizona,” said Manuel Lopez. “Every Friday, we went to breakfast at Denny’s, then to Food City.”

It’s a tradition they established some 40 years ago, Becera de Lopez said.

But this Monday night visit was different.

This time, their Denny’s meal was a celebration of their first trip back to the United States since March 2020, and the first time they’ve been able to sit down to a meal like this as a family in nearly two years.

Laughing with two of their daughters and a son-in-law, they all talked about their plans for the next few days, now that the border is open to them again.

“What hurt most was family,” Becera said. “Not to be able to hug your grandchild at their graduation? It’s terrible.” 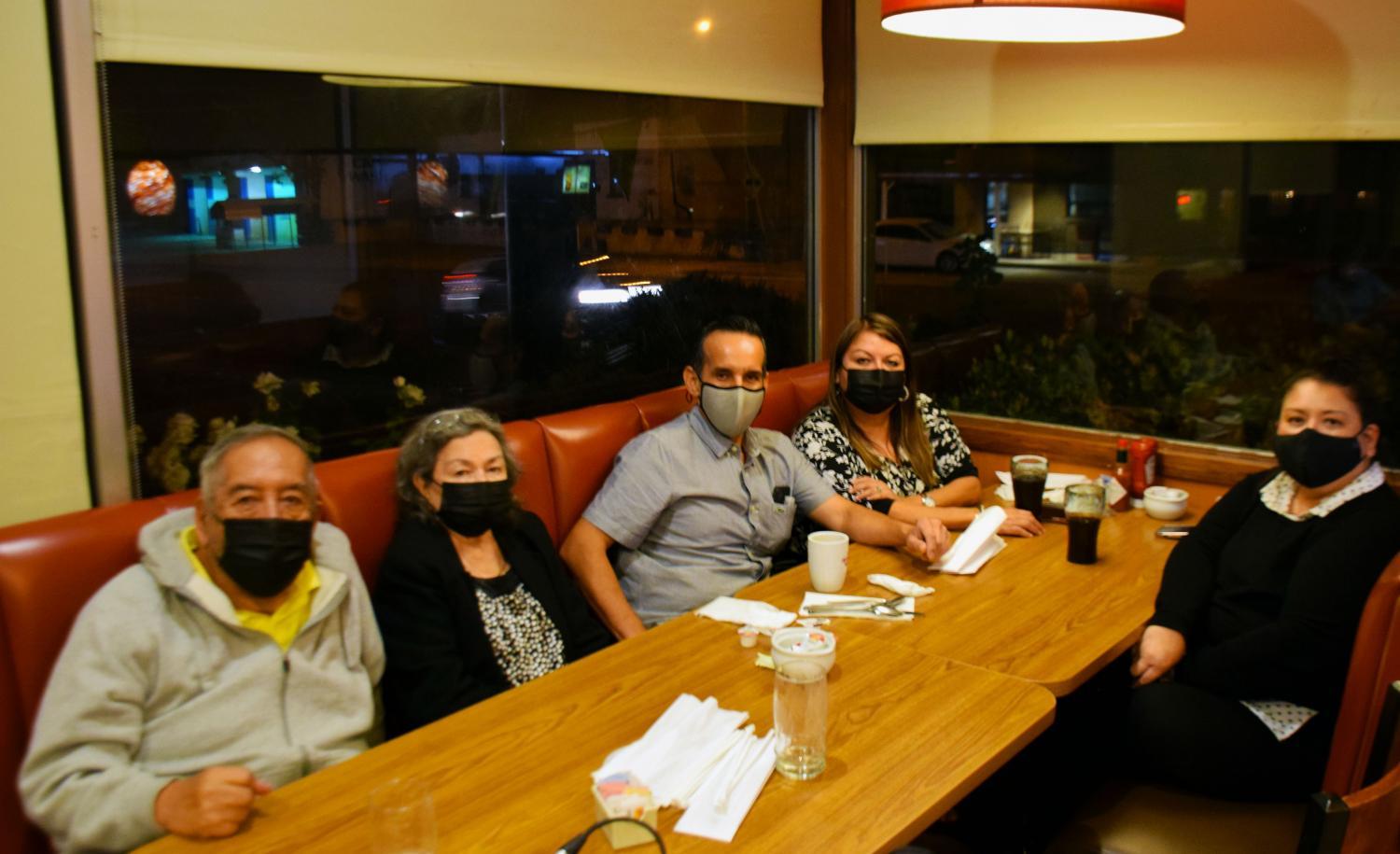 She’s not alone in that sentiment. And reuniting with loved ones was the main goal for many people crossing the border in recent days.

Some met new grandbabies for the first time in person. Others finally embraced parents, grandparents, aunts and uncles after what for many felt like an unbearably long wait.

For the Lopez family, it was traumatic.

“Traumatic because we’re a really close family,” said Cesar Valenzuela, who crossed the border Monday afternoon with his wife Patty Lopez and her parents.

“No, no, no,” her sister Mara Moraila chimed in. “We’re more extreme.”

But all joking aside, they said, the past year and a half was hard on them.

They’ve missed graduations and housewarmings, and were unable to care for sick loved ones who live in the United States, like Valenzuela’s father, who underwent a major surgery.

“And on top of that Christmas and birthday and everything,” Patty said.

Even so, they know they’ve been lucky. 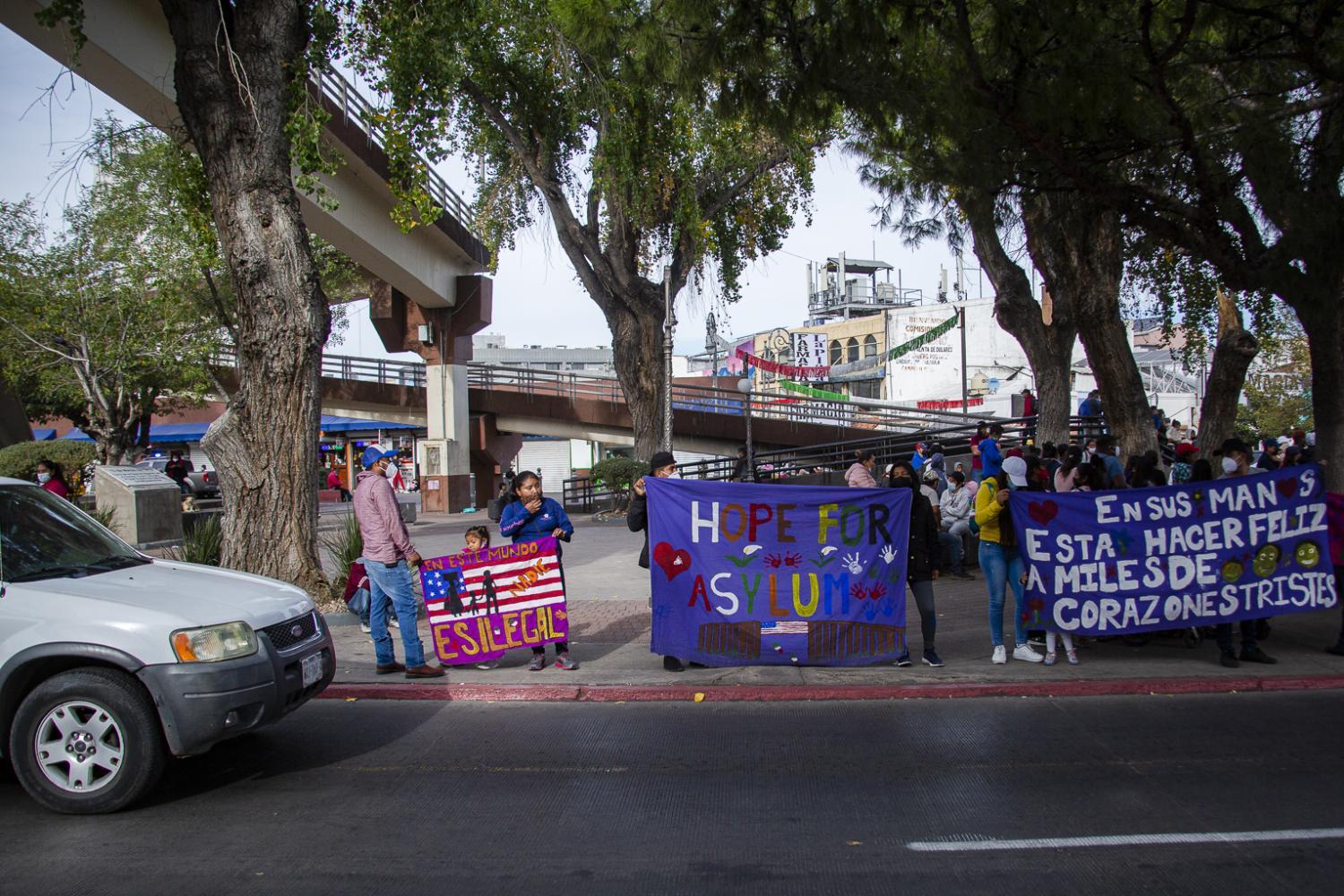 Murphy Woodhouse/KJZZ
Asylum seekers and allies protest the continued expulsion of asylum seekers from the United States, as cars pass en route to the Nogales port of entry.

They said they know people who couldn’t cross the border even to attend loved ones’ funerals.

And Moraila, who lives in Nogales Arizona, has been able to cross the border almost weekly to bring them what they need from the United States - though for much of the pandemic they hardly interacted because of fears about spreading COVID-19. Moraila would drop things off in the parking lot. At Christmas, they made each other food and passed it to each other through the car window.

It certainly wasn’t a replacement for their once customary family gatherings, they said.

But today, a few them are together again. And in a couple of weeks, they’ll all gather in Tucson for Thanksgiving — their first family holiday in two years.

“I feel like I’m waking up,” said Manuel Lopez. “It’s like the last two years of my life have been erased.”

Now, he just hopes the pandemic stays at bay so his family won’t have to go through this again.

As cars drove into the United States Monday morning through the Dennis DeConcini Port of Entry in downtown Nogales, a group of asylum seekers and advocates were protesting what struck them as an indefensible contradiction: the reopening of the border to non-essential trips while remaining closed to asylum seekers through the ongoing Title 42 policy, which allows the U.S. to quickly turn away migrants.

One speaker called on President Joe Biden to imagine his family being in the situation of the thousands of asylum seekers along the border.

She said she’d like him to think about whether “he’d leave them for months, or even years, waiting in a desperate situation.” 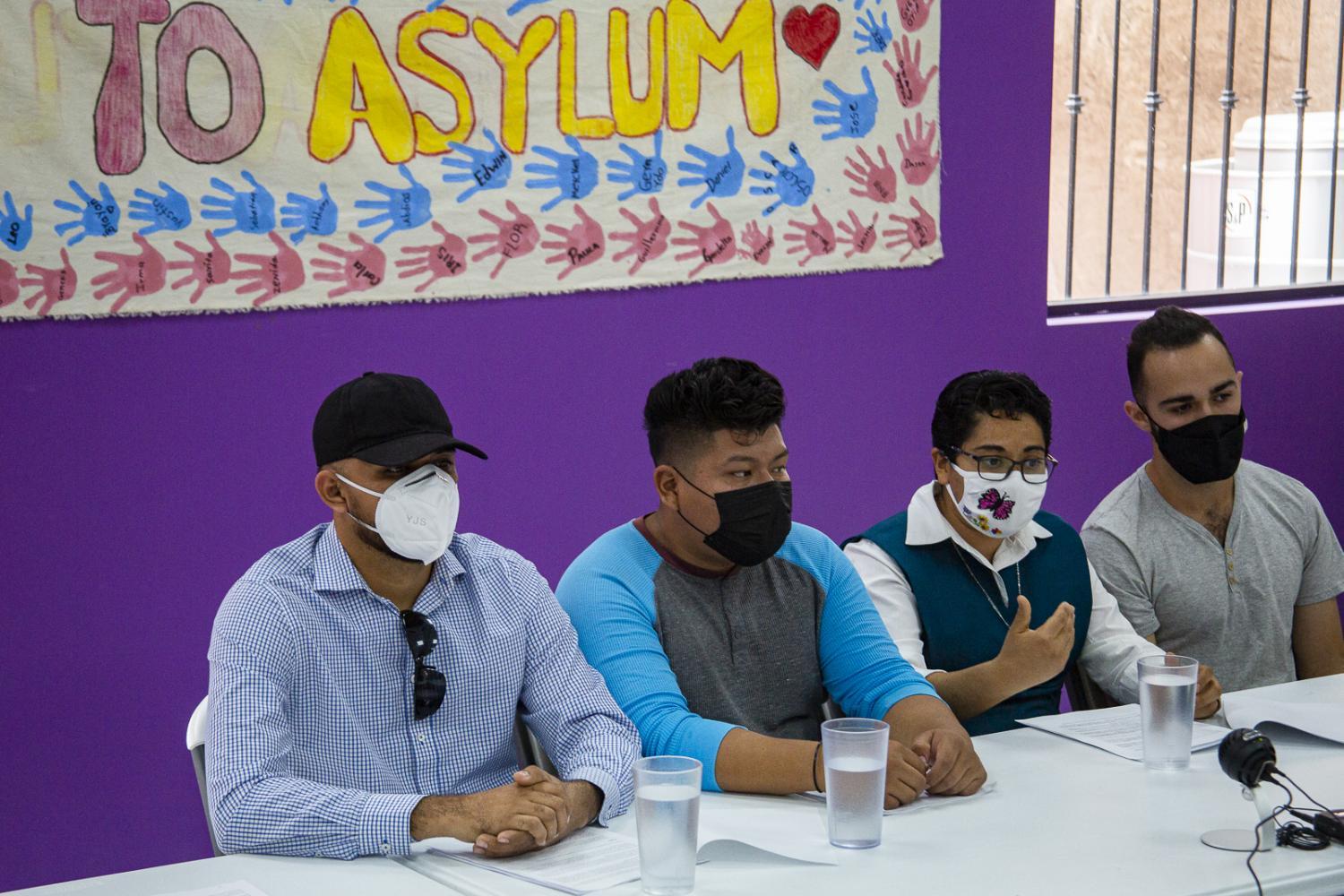 Murphy Woodhouse/KJZZ
Leo, second from left, says that his family was recently turned back from the downtown port of entry in Nogales after trying to request asylum.

Earlier that morning, a family from southern Mexico presented themselves at the port in hopes of starting their asylum process.

Later that day, at the offices of the Kino Border Initiative, which supports and advocates for migrants and asylum seekers in Nogales, Sonora, the father, Leo, recounted the experience. He only gave a first name, citing fears for his family’s safety, and threats made against them by local criminal groups.

He said customs officials asked if he was vaccinated, part of the new non-essential visitor screening, and he told them that he was. He told KJZZ News that he had received the Johnson & Johnson vaccine, which is among those accepted by customs officials.

But ultimately, like thousands of asylum seekers before them, he said he and his family were turned away.

“It’s very unjust that people are going just as tourists,” he said. “And we’re left out. They don't take us into consideration, even knowing that we face more danger being here.”

And it’s not just asylum seekers who still are locked out. Millions in Mexico received vaccines that aren’t recognized by U.S. officials for crossing, like Sputnik and CanSino. The latter was given widely to teachers in the country, including Nogales, Sonora Spanish teacher Brenda Varela.

“Yeah, I feel frustrated that I can’t cross,” she said.

But she also thinks the US could use other tools like coronavirus tests to ensure the safe passage of people like her. She used to go to Arizona two or three times weekly, like many along the border.

“But it isn’t the same need as before,” she said.

Over the last 20 months, she’s found ways to get what she needs — without crossing. 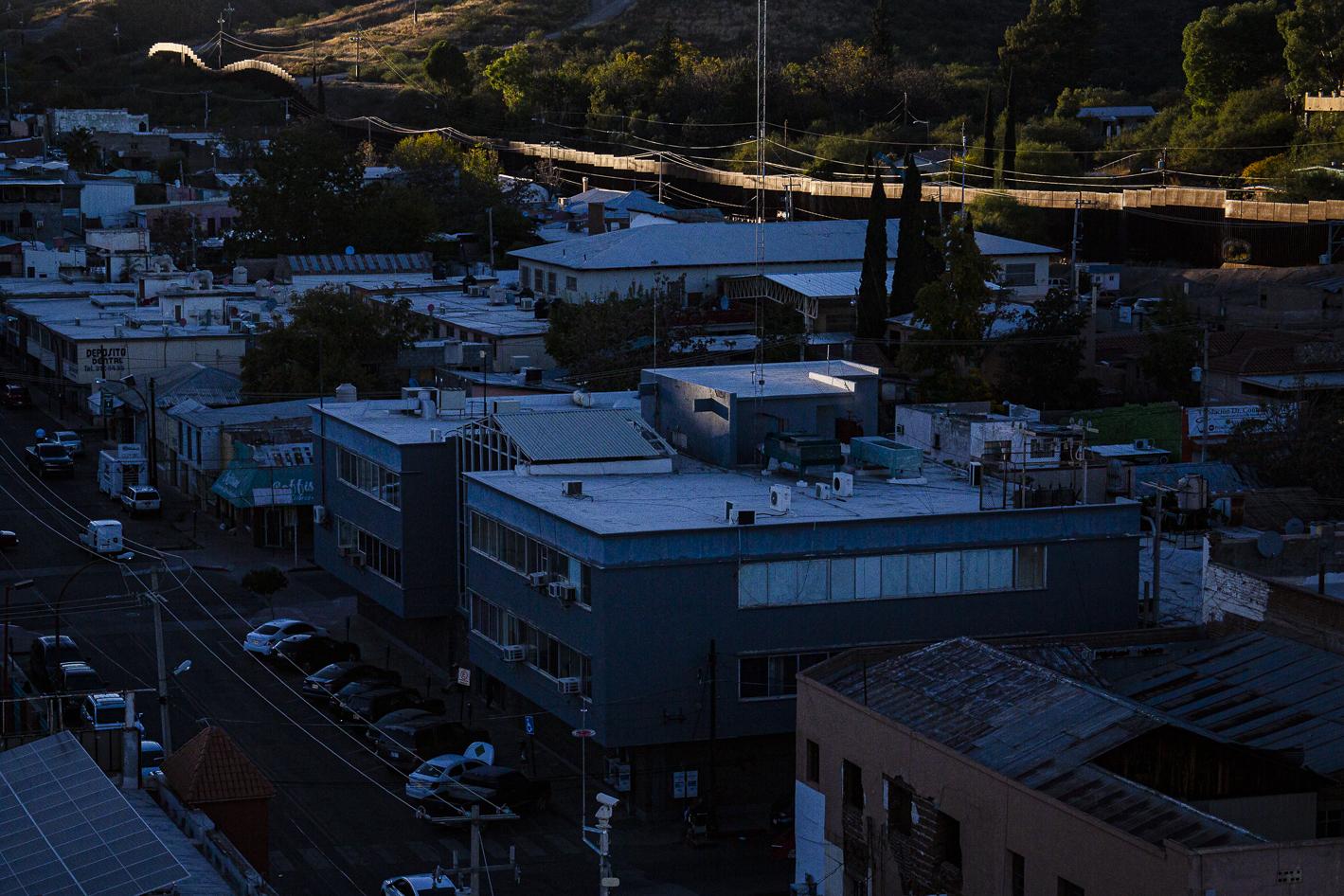 Murphy Woodhouse/KJZZ
The last light of the day hits the border wall that runs through Nogales. 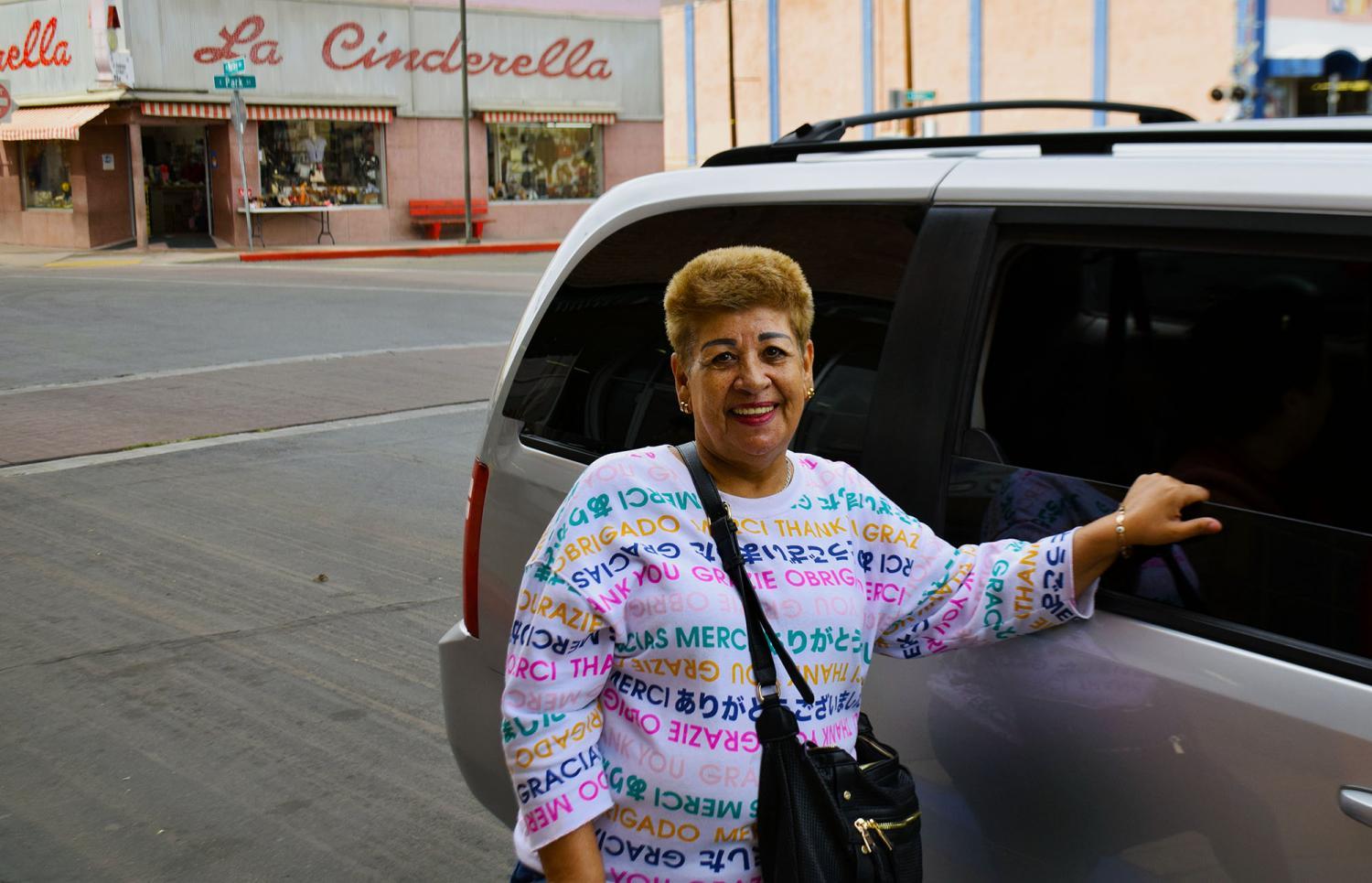 Kendal Blust/KJZZ
Maria Rosario Duarto gets picked up by relatives at the border in Nogales, Arizona, after she crossed for the first time in nearly two years on Monday, Nov. 8, 2021. 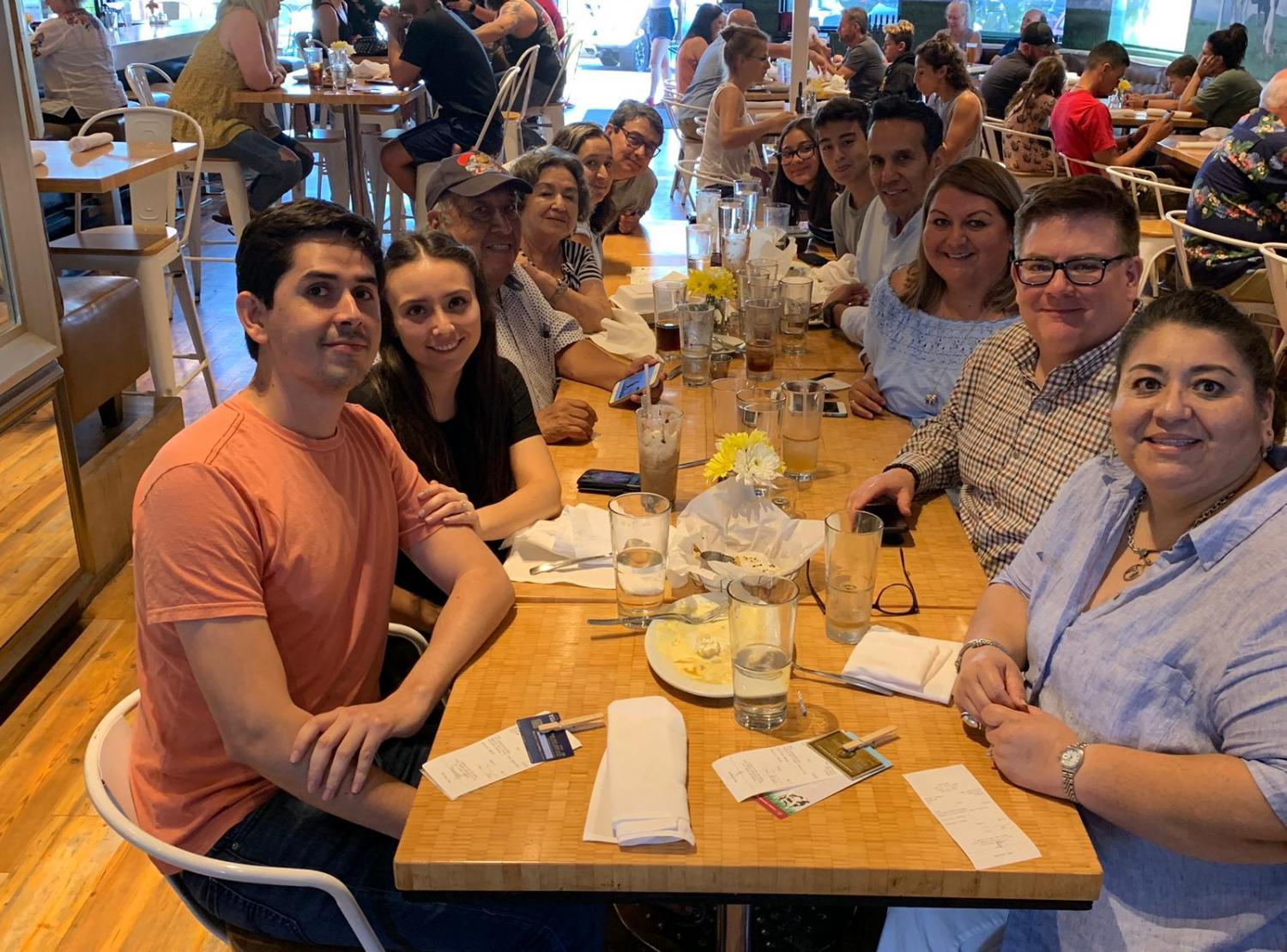 Courtesy of Mara Moraila
The Lopez family celebrate a birthday in September 2018. Before the pandemic, they always spent birthdays and holidays together. 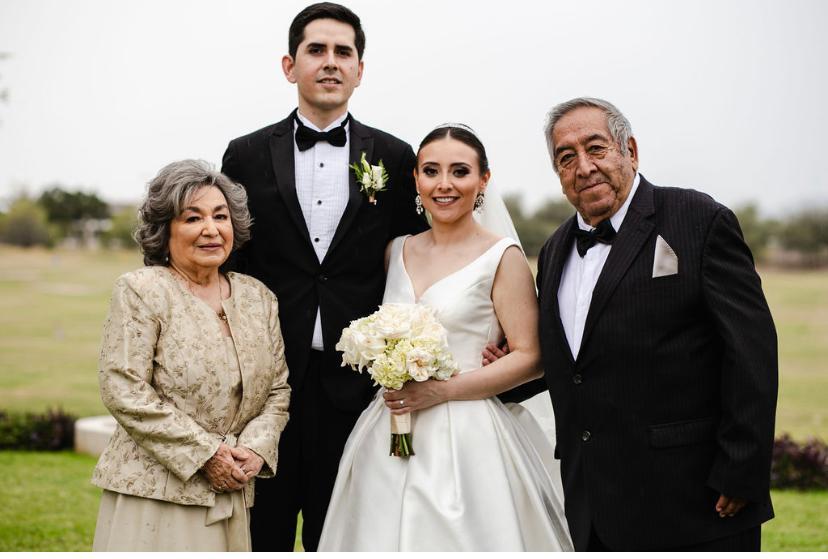 Mara Moraila
Maria Tonita Becera de Lopez (left) and Manuel Lopez (right) at their granddaughter's wedding, less than a month before the U.S.-Mexico border closed in March 2020, cutting them off from visiting family.
Fronteras Sonora The Show Southwest Border