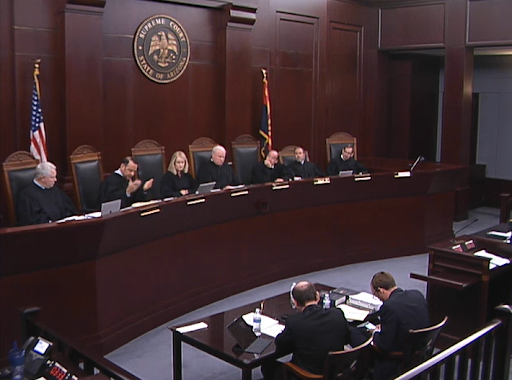 Screenshot of court live streaming
Hours after opening arguments, the Arizona Supreme Court affirmed a previous court ruling which declared a mask mandate ban and other legislation attached to the state budget unconstitutional.

The Arizona Supreme Court on Tuesday voided a ban on mask mandates in public schools and a host of other legislative changes, ruling it was illegal for lawmakers to pile them into a handful of budget bills.

Without comment, the judges rejected arguments by Assistant Attorney General Beau Roysden that there's nothing inherently wrong with the process that lawmakers have used for years to put policy changes, like whether schools can mandate masks for staff and students, into bills that are labeled only as relating to the budget.

Also now voided are a host of other measures, ranging from a prohibition against colleges requiring vaccinations and how to teach about race in public schools to the kind of paper that counties must use for ballots and stripping Secretary of State Katie Hobbs of her powers to defend state election laws.

In upholding a lower court ruling, the justices also slapped down arguments by Roysden that the legislature alone decides whether what it puts in bills complies with the Arizona Constitution. Among those requirements is a mandate that all measures deal with only a single subject and that all bills have a title that informs the public of what changes they make.

Roysden, in essence, told the justices they should butt out of legislative business.

"It is not for the court to second guess that," he argued.

That did not go over well.

Justice William Montgomery got more specific, citing provisions in one challenged bill labeled only as dealing with "budget procedures."

"So how does dog racing relate to budget procedures?" he asked.

"I think that's the toughest question in this case," Roysden conceded.

But he maintained that people, in reading the title "budget procedures," are put on notice that there may be a grab-bag of individual items in there. And that, Roysden said, is all that's constitutionally required.

With Tuesday's order, the justices said that's not the case. But they did not explain their decision, promising a full-blown ruling at some point in the future.

That will be crucial as lawmakers, now banned from using the reconciliation bills as catch-alls, now will be looking for guidance about what they can — and cannot — do in the future.

Senate President Karen Fann (R-Prescott) said the more immediate question is what to do about the now-voided provisions.

One possibility, Fann said, would be a special legislative session. There, each of the provisions that the Supreme Court nullified could be reintroduced and brought up for a vote on an individual basis, avoiding the illegal practice of bunching them together.

But it remains unclear whether each could pass on its own.

For example, legislation spelling out how race, ethnicity and gender can be taught in public schools had failed on its own.

It was only when that language about what lawmakers called critical race theory, was put into a reconciliation bill that it passed. That forced foes to accept the all-or-nothing package to get other provisions they wanted.

It also is a setback for Gov. Doug Ducey who not only championed the ban on mask mandates but has denied some federal COVID-19 relief dollars to schools that he said are not in compliance with state law. Now, with the law permanently struck, there is no excuse for him to withhold those funds.

Tuesday's ruling also could cause some school districts who had balked at mask mandates because of the law to now rethink that position.

At stake were provisions of four measures lawmakers adopted earlier this year, all under the banner of "budget reconciliation."

Maricopa County Superior Court Judge Katherine Cooper ruled earlier this year that none of the measures comply with that constitutional requirement that the title of each bill must reflect what changes it makes. And she said one of them — the one labeled only "budget procedures" — was so full of unrelated issues that it violated the separate requirement for all measures to deal with only a single subject.

Roysden drew the task of convincing the high court that Cooper got it wrong.

But it became clear, even before he said his first words, that the odds already were against him. Brutinel noted that the justices met earlier, behind closed doors, to discuss the issues.

"I think it's fair to say there's some consensus about whether the statutory provisions violate the single subject rule and the title requirements of the Arizona Constitution," he said. "I think the consensus is that they do."

All that left Roysden to argue that this is none of the court's business.

"This would be uncharted territory," he told them. "That is a terrible idea for the court to start down this path."

But Montgomery said legal precedents going back more than two centuries spell out that it is precisely the role of the judiciary to judge — and strike down — actions by other branches of government that run afoul of the constitution. And Montgomery said there certainly are questions about whether lawmakers are in compliance.

Consider, he said, the measure labeled "K-12 budget reconciliation." Among the provisions in that bill is that ban on schools mandating masks.

"So how does that relate to appropriation?" Montgomery asked.

"The legislature could say if we're going to fund schools, we want kids to go to the schools and we think (a) mask mandate is going to deter attendance," Roysden responded.

"We don't want the schools that we fund to impose these types of mandates," he continued. "That is within the power of the legislature."

That line of thinking clearly didn't convince the justices.

Anyway, Roysden argued, no one is fooled by the title. He told the court that anyone who cares about K-12 funding would look at the title and be on notice that there might be major policy changes — like that ban on mask mandates.

That drew a skeptical response from Brutinel.

"We're all supposed to understand that 'budget reconciliation' means 'anything we want' "? he asked.

Roysden said those in the know do understand.

"Anybody who reads the newspaper will know," he said.

"I'm not going to a newspaper to decide a constitutional issue," Montgomery shot back.

In striking down the laws, the justices sided with attorney Roopali Desai, representing the education groups and allies who challenged the four statutes. She warned the justices against accepting the arguments that lawmakers alone get to decide what can be in budget reconciliation bills and that the courts have no role in determining whether they are complying with constitutional requirements.

"That could lead to some very problematic results," she said. "What's to say that the legislature doesn't say that about every act that they pass?"

In voiding the statutes, the justices also rejected Roysden's backup argument that if they were going to find the practice of budget reconciliation bills illegal they should make their ruling prospective. He said there was no way for lawmakers to know that what they were doing was unconstitutional.

That would have allowed the challenged provisions to take effect.

But Desai countered — and the justices apparently agreed — that legislators have been on notice since at least 2003 when the Supreme Court found fault with a similar process where multiple unrelated issues were put into a limited number of bills.

Some educators were relieved by the court’s ruling since it voids laws that would have prohibited Arizona public schools from requiring face coverings for students and staff. That was important for Beth Lewis, the executive director of Save Our Schools Arizona and one of the plaintiffs in the complaint.

“I’m a teacher who just came down with a case of COVID and the last thing we need to do is be rescinding mask mandates now when the pandemic is still surging,” she said.

The Phoenix Union High School District, the first district to go against the governor and the state Legislature, and implement a mask requirement before the law was scheduled to take effect, said it was grateful for the Tuesday ruling.

“Arizona’s classrooms are now safer places for students and educators. School systems with a mask requirement are 3.5 times less likely to have a COVID-19 outbreak. The safety of all staff, students, and families must be a top priority of local and state leaders,” the district said in a statement via Twitter.

Arizona Education Association Vice President Marisol Garcia is also relieved another policy that attempted to control how topics of race and ethnicity can be taught in the classrooms won’t go forward. She's also encouraged by the potential impact this decision will have in preventing logrolling in the Legislature.

“The Legislature has to follow rules and there’s expectations that they need to follow which is when you have a budget bill and it’s called a budget bill that only deals with the budget,” she said.

These educators weren’t the only ones celebrating the Tuesday decision. House Democratic Leader Reginald Bolding called the ruling "a huge win for Arizona students and voters."

"This is also a win for the legislative process," Bolding said. "It was never appropriate for the Speaker and Senate president to load up the budget with unrelated and controversial policy items to mollify certain extreme members and avoid negotiating a bipartisan budget. The bottom line is Arizona public school students, teachers and staff will be better protected from COVID-19 because school boards can take necessary measures to protect them without politicized anti-science interference from the governor and Republican lawmakers. A unanimous ruling from a Ducey-appointed Supreme Court is as strong a rebuke as we can imagine."

Meanwhile, the governor’s office told KJZZ News in a statement it was extremely disappointed by the ruling.

“There are three separate co-equal branches of government, and we respect the role of the judiciary — but the court should give the same respect to the separate authority of the legislature,” Ducey’s office said in an emailed statement. “As it relates to the provisions protecting Arizonans from burdensome mandates, we believe every Arizonan should have the ability to make their own health decisions with the guidance of their doctor, not because of some government mandate.”

With H.B. 2898 and S.B. 1825 voided, the ruling also clears the ways for school districts and charter schools to require students or teachers to receive a COVID-19 to participate in in-person instruction. So far, at least one district, Phoenix Union, requires COVID-19 vaccines for student athletes and coaches. In addition, the Arizona Board of Regents and the state’s public colleges and universities are free to require students to obtain a COVID-19 vaccine or require mandatory COVID-19 testing. Already some higher-ed institutions are requiring face coverings in certain indoor settings, and COVID vaccination for employees.

“It is now up to the public school boards, ABOR, and the management of the public universities to act on this opening to keep the schools and academic communities safe from the virus that has already produced in Arizona one of the worst excess death totals in the country,” said Richard Newhauser, an ASU instructor and another plaintiff.

A statement from ASU suggests it is not anticipating any new policy change.