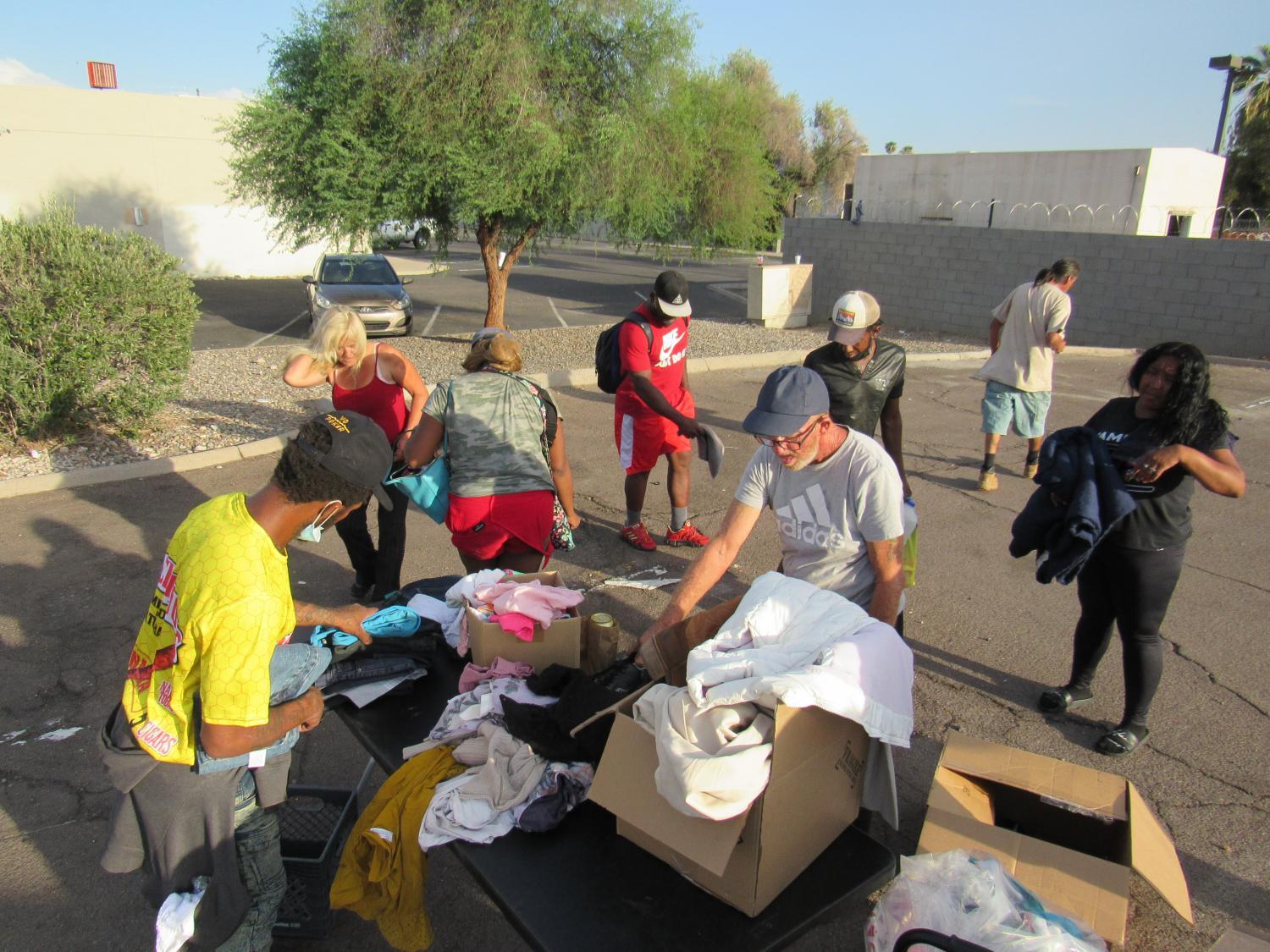 Matthew Casey/KJZZ
People living on the street near 27th Avenue and Indian School Road look through boxes of clothes and supplies brought there by the group Feed Phoenix.

A volunteer for the group Feed Phoenix served snacks, water and Gatorade to people living on the street.

The menu at the lot near 27th Avenue and Indian School Road also had restaurant-quality chicken noodles with roasted vegetables.

Other nearby stations had hygienic supplies, Naxalone and clothes. People looked through donated shoes hoping to find their size.

The scene was proof that many living on the street trust Eric Brickley. He started Feed Phoenix in 2020 after seeing a homeless person put trash back into a garbage can after an unsuccessful dig for food.

“It just doesn't seem to be treated as the crisis that it is where people are literally dying from being out there,” he said.

Powered by people Brickley met while protesting the police killing of George Floyd, the group also goes to parks and downtown.

At first, their work drew negative attention from law enforcement, especially in the area around the downtown Human Services Campus, a collection of social service groups anchored by a shelter.

“People in our group have been arrested just for being on the street,” he said.

Brickley said contacts with Phoenix police are minimal since the U.S. Justice Department launched an investigation of the department and city nearly three months ago.

Attorney General Merrick Garland promised to review allegations of excessive force, discriminatory policing and retaliation against protesters. Plus, how people with disabilities are treated and “whether the Phoenix Police Department violates the rights of individuals experiencing homelessness by seizing and disposing of their belongings in a manner that violates the constitution.”

The head of the downtown campus hopes federal investigators see how the final query intersects with other parts of their review.

Phoenix’s mayor and former city manager have told the Arizona Republic there’s no evidence that belongings were illegally thrown out.

A city spokesman says those assessments were based on the results of investigations. Any new complaints will be reviewed as well. 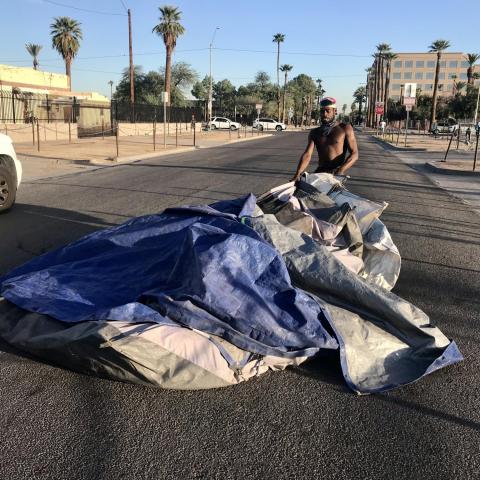 Corey Wright pulled the tent he lives in up 12th Avenue. He had to relocate about a block north from near Madison Street to Jefferson.

“I’m trying to get another tent. It’s ripping apart from me dragging it on the ground,” he said.

It was a half-hour after sunrise near the campus of social service groups. Phoenix police were there to warn those sleeping on the street that it’s cleaning day.

“I have to move my stuff, it seems like every day,” said Wright.

This includes the tent, a shopping cart and a stroller full of possessions. Not doing this most every other weekday could mean a citation, going to jail and having his things thrown out. Wright said he gets along with the police, which other unsheltered people don’t like.

Wright has been moving his stuff for street cleanings for a long time — since before the pandemic hit and the city increased the cleanings from once a week to three.

“My spirit feels broken but I know I’ve got God on my side,” he said. 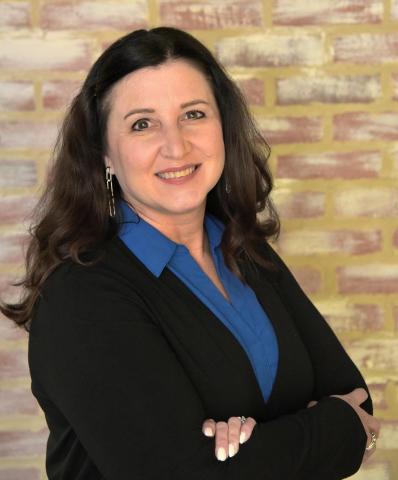 “I think that only happens if there (are) serious enough allegations and there’s enough data information to say that there’s something not right,” she said.

Schwabenlender sees Phoenix police as messengers of policy makers. She’s watched the dynamic between law enforcement and the unsheltered change over time.

“I think some of it depends on who’s in leadership positions. Who is the mayor? Who is on (the) city council? What’s their perspective on homelessness?”

Schwabenlender wants the federal investigators to see how their other questions about discriminatory policing and how Phoenix treats disabled people intersect with the question of personal property.

Months ago, Schwabenlender asked Phoenix to do fewer street cleanings.

The city said it routinely reviews how often the work is done, but did not answer when asked if Schwabenlender had been told yes or no.