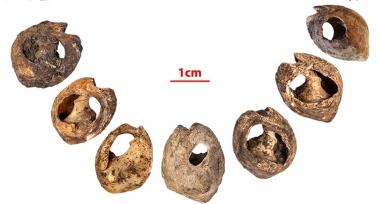 Abdeljalil Bouzouggar
Thirty-three shell beads, aged between 142,0000 and 150,000 years, were discovered in a Moroccan cave.

Ever ponder the question: what makes us human? Is it the opposable thumbs? Our brains? The necessity for pumpkin spice? Well, the answer may lie with 150,000-year-old beads.

Thirty-three shell beads, aged between 142,0000 and 150,000 years, were discovered in a western Moroccan cave. Beads like these have been found before in north Africa, but a new University of Arizona study says that these are the oldest ever found.

One of the authors, archaeologist Steven L. Kuhn, says this is important. This may be evidence of a distinctly human trait: symbolic nonverbal communication; a way to facilitate understanding between strangers. A modern day example, he says, is a wedding ring.

“You don’t wear it to remind your spouse or your partner that you’re married to them. They pretty much know that. You wear it so that other people look at it and go ‘OK, I should behave toward this person in a particular way,'" Kuhn said.

Kuhn says this shows that “even hundreds of thousands of years ago” humans wanted to cooperate in bigger groups.

But Polly Wiessner, an anthropologist with Arizona State University, thinks they weren’t signals to strangers but the beginning of networks.

“So these items would signal affiliation, maybe partnerships and gift giving and then mutual help," Wiessner said.

But without a time machine, the absolute intention or use behind these ancient beads may remain a mystery.