Everyone Was Talking About Gabby Petito, But Indigenous Women's Cases Still Go Ignored

There is an image going around social media right now that offers a new perspective on the case of Gabby Petito, the 22-year-old woman whose body was found in Wyoming last week. It shows a white woman holding up a sign that reads, “She is Missing.” She’s surrounded by microphones of the news media. Behind her, off to the side, a Native American woman stands alone holding the same sign. 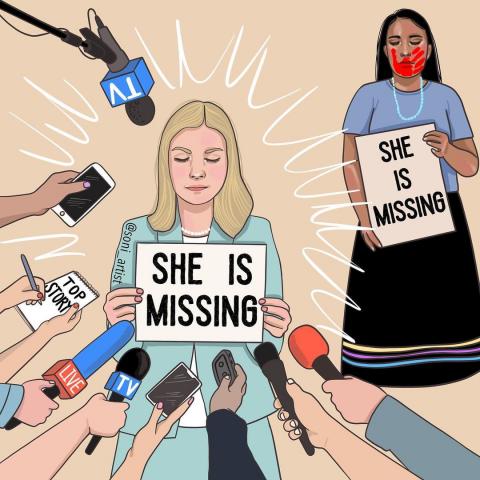 Soni Lopez-Chavez
"Every single person that is missing deserves the same attention and care given to their case," says artist Soni Lopez-Chavez. "Her life matters just as much as the next. Bring them home. All of them. Sending prayers to all the families."

Petito’s case has captured the nation’s attention in recent weeks as the mystery around her disappearance played out in real time on the news. But for some Native Americans, it only highlights what’s not covered so insatiably by the media: the disappearance and death of untold numbers of Indigenous women.

In 2019, Gov. Doug Ducey signed a law creating a committee to study the issue here — and to find ways to stop the violence against these women and girls.

One of the people who sat on that committee was Debbie Nez-Manuel, a Navajo activist and community leader here.

The Show spoke with her to learn about the double standard cases like Petito’s lay bare.