Some Mesa Residents May Have Cloudy Water Until January 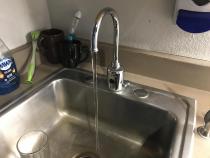 Some Mesa water customers may experience subtle cloudiness from their taps until the first part of next year.

Those who reside east of the Loop 101 to Val Vista Drive and north of Baseline Road are the most likely to be affected according to a release from the city’s Water Quality Division.

The cloudiness is caused when “dissolved air found trapped in groundwater” comes out of people’s taps, according to Water Resources director Jake West.

He stated, “Our water distribution system is pressurized, causing any air that is present in groundwater to remain dissolved in the water until the pressure is released at the customer’s tap. Dissolved air can cause water to have a cloudy or milky appearance, but it is safe to drink and will not damage plumbing or appliances.”