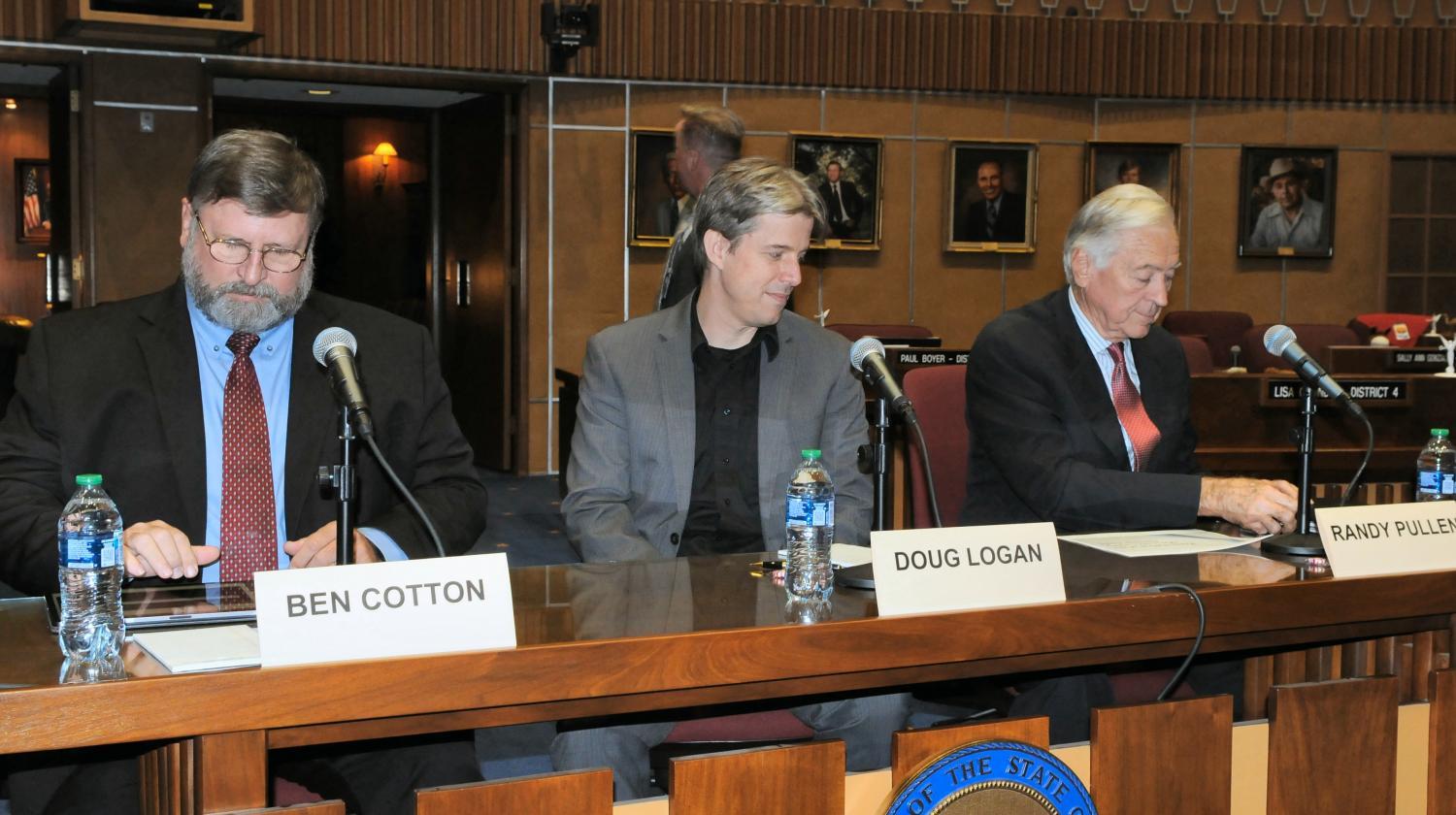 Howard Fischer/Capitol Media Services
Audit team members Ben Cotton (from left), Doug Logan and Randy Pullen prepare to give their reports Sept. 24, 2021, to the state Senate of what they found while auditing the 2020 election returns.

In fact, according to the review, Biden exceeded the county’s tally by 99 votes, while Trump received 261 fewer votes in a hand recount compared to official results. At a presentation of the final version of the report on Friday, Senate President Karen Fann confirmed it.

“That is a true statement,” she said.

The announcement was a blow to Trump's supporters — and even the former president himself — who’ve latched on to the so-called Arizona audit as evidence the election was rigged.

Even before the scheduled release of the findings Friday afternoon, some Republicans had already claimed there was enough evidence to “decertify” or overturn Trump’s loss in Arizona — a prospect resoundingly dismissed by legal scholars. Others, like GOP gubernatorial candidate Matt Salmon, have called for more investigations of the 2020 vote, and not just in Maricopa County.

But the report presented Friday threw cold water on the grandest claims of fraud, as Fann confirmed the authenticity of draft copies that were leaked to the media, including KJZZ, one day earlier.

The draft and final report show a hand recount of the nearly 2.1 million ballots cast in Maricopa County hewed closely to the official canvass of the results. Still, Fann and Sen. Warren Petersen, the Republicans who issued subpoenas that obtained the ballots and voting materials needed for the investigation, gave the contractors they hired to conduct the review a platform to explain their findings.

Doug Logan, a cybersecurity expert with no previous elections experience whom Fann hired to lead that review, also acknowledged the accuracy of the county’s vote tally — an outcome that had already been certified by county and state officials and confirmed by two prior audits.

“We can say that the ballots that were provided to us to count in the coliseum very accurately correlate with the official canvass numbers,” Logan stated.

Still, Trump claimed vindication, declaring “massive fraud” was found even though officials with the election review explicitly said otherwise. Many Arizona Republicans, including some state senators in Fann’s GOP caucus, similarly claimed victory and continued to demand the election results be overturned.

They were buoyed by Logan and his team of contractors, who spent three hours presenting concerns about the county’s elections systems and record-keeping, and accused Maricopa County officials of stonewalling their effort to perform “a complete audit.”  Based on those concerns, many posed as questions or unsubstantiated issues, Fann referred the reports to Arizona Attorney General Mark Brnovich.

“The audit also shows how we can strengthen our democracy,” Fann wrote. “Several of the auditors’ findings are concerning because they suggest less-than-perfect adherence to Arizona’s standards and best practices.”

Fann’s letter was sent before the presentation, during which Maricopa County election officials debunked many of the concerns she cited in her call for an investigation.

Maricopa County Board Chairman Jack Sellers, a Republican who opposed the Senate’s efforts to review the election, said the presentation was “irresponsible and dangerous.”

“The Cyber Ninjas’ opinions come from a misuse and misunderstanding of the data provided by the county and are twisted to fit the narrative that something went wrong,” he said in a statement.

It’s a sentiment shared by election experts across the country, who’ve warned any findings by Cyber Ninjas and its CEO, Logan — who's embraced conspiracies of election fraud — can’t be trusted. The same goes for subcontractors conducting other aspects of the Senate’s review, they say.

As the Arizona Republic reported earlier this week, Logan was already involved with Trump allies attempting to sow doubts about the election, and block Biden’s victory, long before he was hired in Arizona.

And in the months since the review first began in late April, contractors and Senate Republicans have drawn the scrutiny of the U.S. Justice Department, made errant claims about illegitimate votes that were promptly debunked, and disclosed that prominent Trump supporters engaged in efforts to delegitimize the former president's defeat provided millions of dollars to fund the process.

But Fann said an investigation by the Attorney General’s Office is warranted, and said Republican lawmakers would promptly begin prepping legislation based on Logan’s recommendations.

EDITOR'S NOTE: The story has been updated to correct the month the review first began.