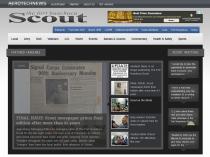 A southern Arizona newspaper has ended publication after 61 years.

The Fort Huachuca Scout began printing in 1954, providing news for soldiers and families on and around the army base near Sierra Vista.

The Army said the Scout will continue as an online publication. According to the Army’s website, the Scout was the fifth in a series of Fort Huachuca publications, dating back to 1920.