How Phoenix Residents Are Reclaiming Their Neighborhood Park

Some Phoenix residents are taking action to reclaim their neighborhood park near 27th and Glendale avenues.

As the sun begins to set on another hot September day, Alberto Valle and his kids are working up a sweat, kicking a soccer ball around.

But their fun ends abruptly.

“Because I find needles in the grass," Valle said. "That’s why I stopped playing."

He wasn’t the only one to spot needles. So did his 9-year-old daughter, Kimberly. Valle remembers how the family used to enjoy weekends at Homestead Park playing and barbecuing.

“We’re close to 27th Avenue, we have a lot of prostitution and drug dealing going on along 27th Avenue. Some of that tends to trickle into this park,” said Jeff Spellman, who lives in the area and helps lead the Violence Impact Project Coalition, a neighborhood group that advocates for an active, safe and welcoming community.

"We have a lot of prostitution and drug dealing going on along 27th Avenue. Some of that tends to trickle into this park."
— Jeff Spellman, neighborhood activist

“I don’t think most people are generally afraid of a person who appears homeless, but they are afraid when they see a group gathering and it looks like something’s not right with this picture, you know, what are grown-up men on BMX bikes with backpacks doing in this park? And eight or 10 of them in a circle,” he said. “So that’s some of the stuff we want displaced out of this park."

How do you do that? Spellman and city staff say the answer is to reactivate the park.

On Sept. 7, the Parks and Recreation Department launched outdoor activities for kids: games, arts and crafts — even homework help. Every weeknight through Dec. 15, park employees will provide supervision at Homestead Park.

“I think one thing that COVID taught us was the fact that we need a lot more open space,” said District 5 Councilwoman Betty Guardado, who represents the Homestead Park area. “There’s work to be done, but I think that we’re very committed to working on our open spaces and how is it that we can get children out and play safely for their own mental health.” 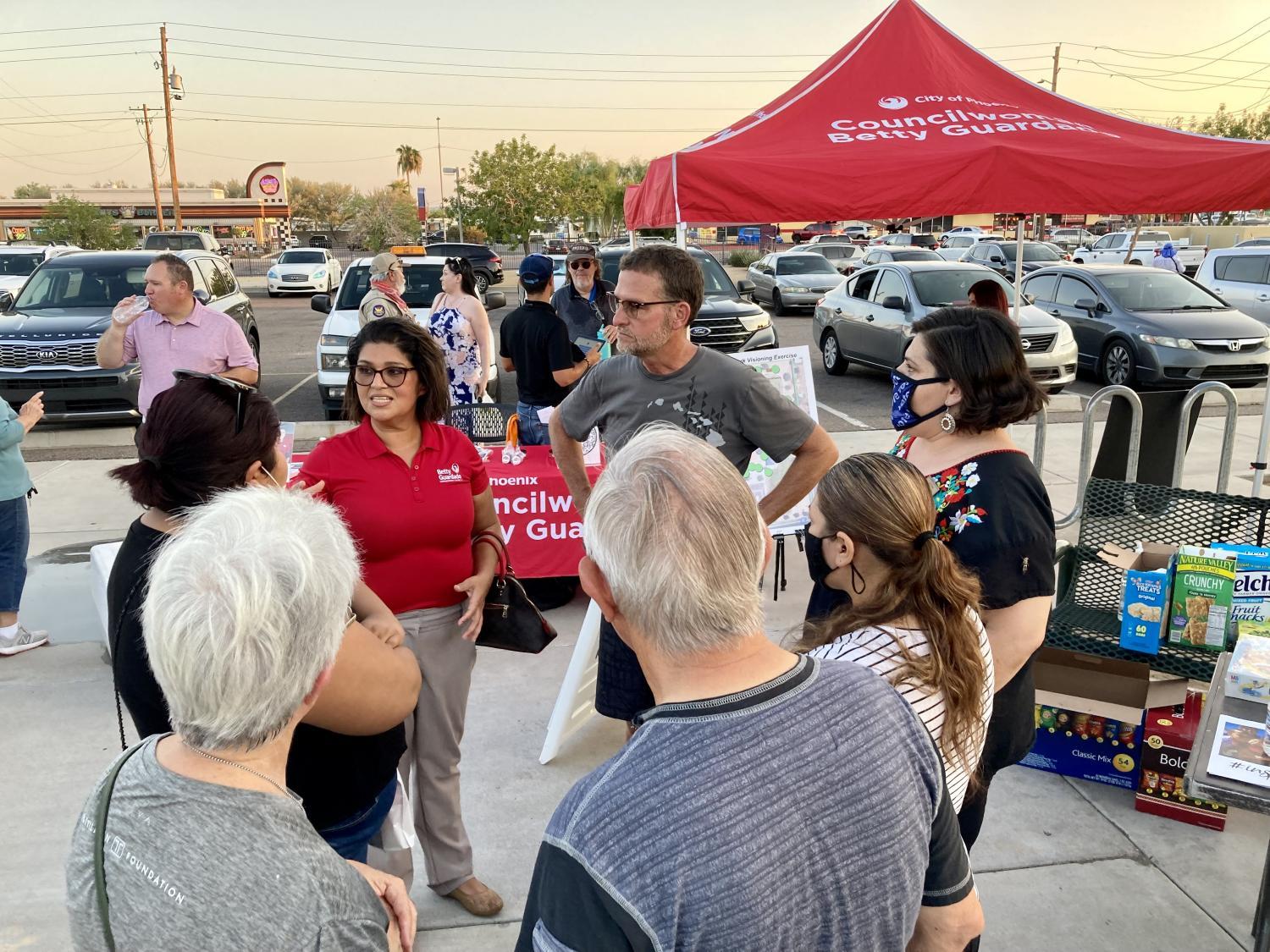 It’s not just kids who can benefit from being outdoors. A study published in the International Journal of Environmental Health Research found that simply visiting a park immediately improved life satisfaction scores. More than 60% of people reported feeling better after a 20-minute visit.

Spellman says his group is working with the Maricopa County Health Department on a program called “Park RX.” "Park prescriptions, in other words, getting people, you know, out to the park to use it for health benefits. And so they are now talking to the senior groups about leading walks in the park, doing yoga in the park, possibly doing a community garden in the park.”

Valle would like to see a lighted basketball court at Homestead Park. That was one of the top requests from a survey of residents. Others suggested a splash pad and soccer field. But Homestead Park opened in 1999 and it’s smaller than newer parks or those built outside the urban core. That’s why Spellman’s group will work with the Parks and Recreation Department to come up with a feasible list.

“We’ll go to the parks board and say look, No. 1, we want to change the hours. We want to get rid of negative, bad things that happen early in the morning and late at night. We want the park open during hours that people generally use it and then here’s the things they’d like to see added to the park and then we’ll present all that as a big package,” he said. “And then hopefully, the public will come out and comment in those meetings, in those public meetings, supporting those ideas and then that sets a plan in motion.” 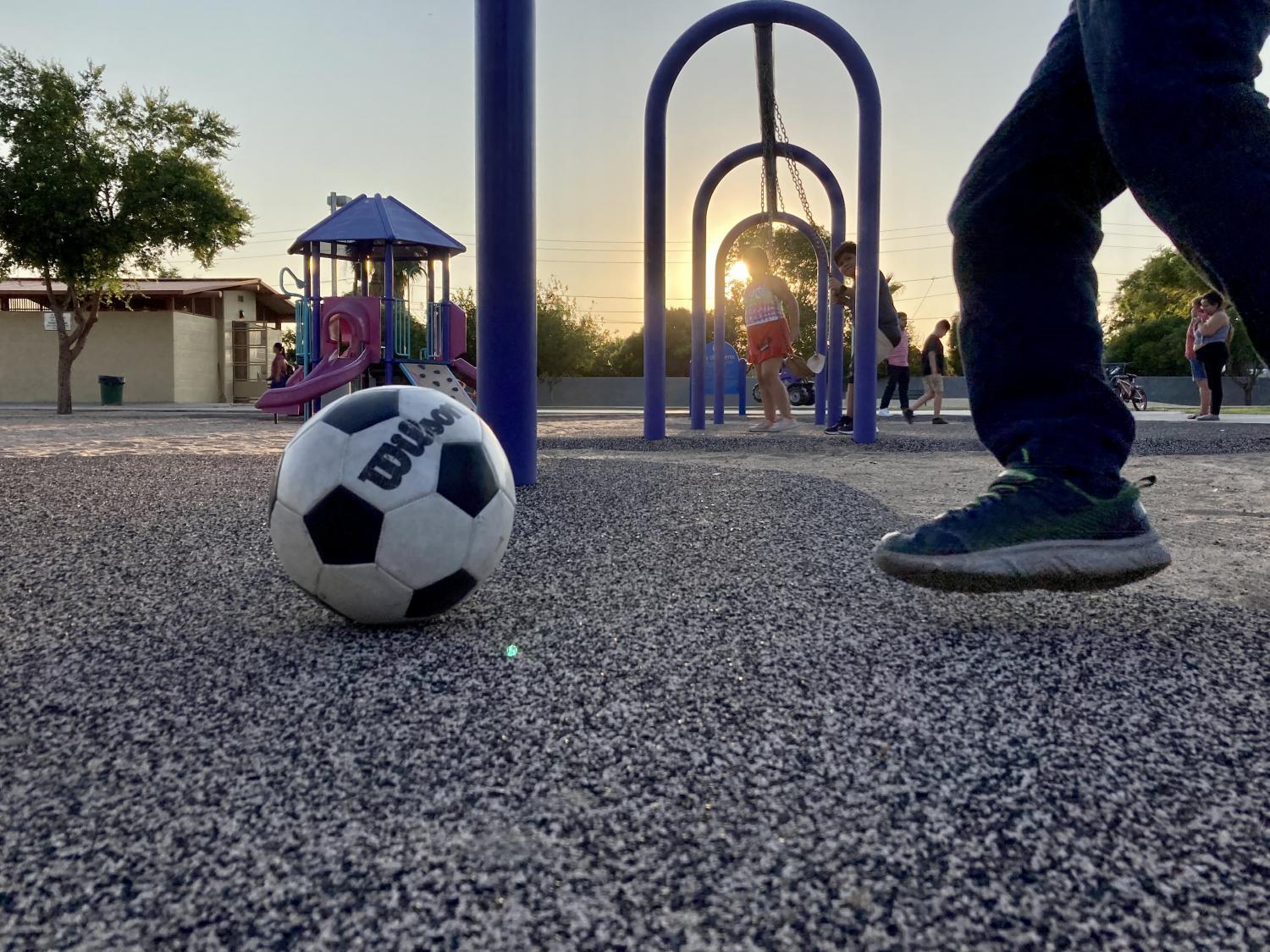 Christina Estes/KJZZ
A soccer field, lighted basketball court and splash pad are some amenities residents would like to see at Homestead Park.

Getting to that point will require residents like Valle to stay active and convince more neighbors to see it his way.

“I don’t like my children to stay all day in the home because only play videos and see the TV, that’s not good,” he said.

While no one’s making promises about adding specific amenities to Homestead Park, Guardado said, “I’m sure that we will be able to figure out how we could make something happen.”

Homestead Park’s full name is John F. and Mary P. Long Homestead Park. It was the original homestead of the Long family. John F. Long was a Phoenix homebuilder and philanthropist and the family donated the land to the city.

In addition to Homestead Park, the city is providing outdoor activities for kids at three other parks. The program runs from 5-8 p.m. Monday through Friday through Dec. 15. Weather conditions like excessive heat or rain may cause cancellations.