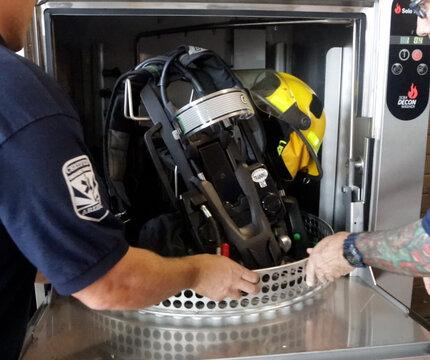 Goodyear says it’s the first city in the Southwest to invest in technology that thoroughly decontaminates firefighters’ equipment.

The Fire Department spent about $75,00 for three  Solo Rescue® machines that clean air tanks, helmets, boots, gloves and facemasks. Chief Paul Luizzi said crews at fires still hose off and scrub their gear before putting their equipment through a 30-minute cycle.

“And it’s amazing to see still the amount of black water that comes out of that,” he said. “It’s crazy to even imagine that that much soot and byproducts of smoke is still left on their equipment.

Firefighters can be exposed to gases, vapors and chemicals that are known or suspected to cause cancer.

“It makes me feel good that we’re doing the right thing, that people that don’t even work for the department are talking about the things that we’re doing for our employees, and our firefighters,” Luizzi said. “And I think the men and women that are current firefighters feel safe, that we’re providing for them as much safety as we physically can.”

The Centers for Disease Control and Prevention say if a firefighter’s gear is not adequately cleaned or stored, chemicals on the equipment can contaminate vehicles and the fire station.

Luizzi said the Solo Rescue® representative told Goodyear it was the first city in the Southwest to buy the washers. Goodyear’s newest fire station incudes a decontamination corridor and a vestibule that separates the living side from the business side.