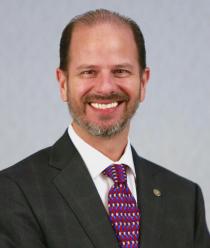 School is in session here in Arizona, and more schools are deciding to implement mask mandates to protect students and staff from the rapidly-spreading delta variant.

As KJZZ has been tracking, close to 30 districts have now defied Gov. Doug Ducey’s wishes — and a new law he signed that bans mask mandates by requiring them anyway.

A judge ruled that law doesn’t go into effect until the end of September, opening the door for more schools to jump on board.

That includes the Scottsdale Unified School District, which voted last week to put in place a mask mandate citing increasing cases of students with COVID-19 in the district.

In fact, Scott Menzel says they’ve seen more cases so far this year than at any point last year when the pandemic was at its worst.

Menzel is the superintendent of the Scottsdale Unified School District. The Show spoke with him more about the board’s decision to put in a mandate — and what went into it.

The Show also turned to Maria Polletta with the Arizona Center for Investigative Reporting to find out what's happening across Arizona schools — and just how many cases of COVID-19 they're seeing in students this early in the school year.

EDITOR'S NOTE: Due to an editing error, this story has been updated to correct the spelling of Maria Polletta's name.