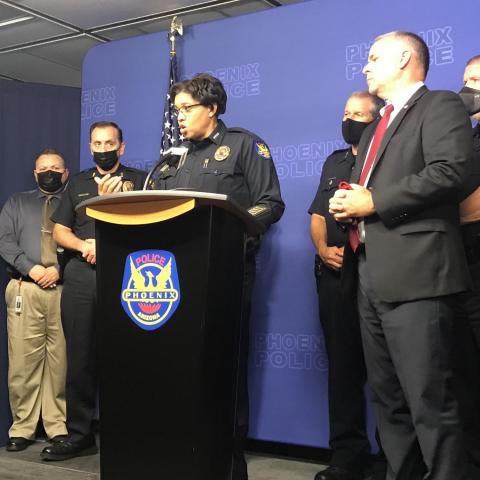 Matthew Casey/KJZZ
Phoenix Police Chief Jeri Williams is flanked by officers and the city manager at a news conference on Aug. 5, 2021.

She was given a single-day suspension last week.

However, city-commissioned probes revealed that Williams’ assistant police chiefs kept her in the dark about charging protesters with gang-related offenses. A second report showed that Williams did not investigate officers who distributed commemorative-like coins that mocked protesters in 2017.

Now, the U.S. Department of Justice says it will be doing a deep probe into the Phoenix Police Department.

To parse through what’s happening, The Show spoke with the Arizona Republic’s Jen Fifield.