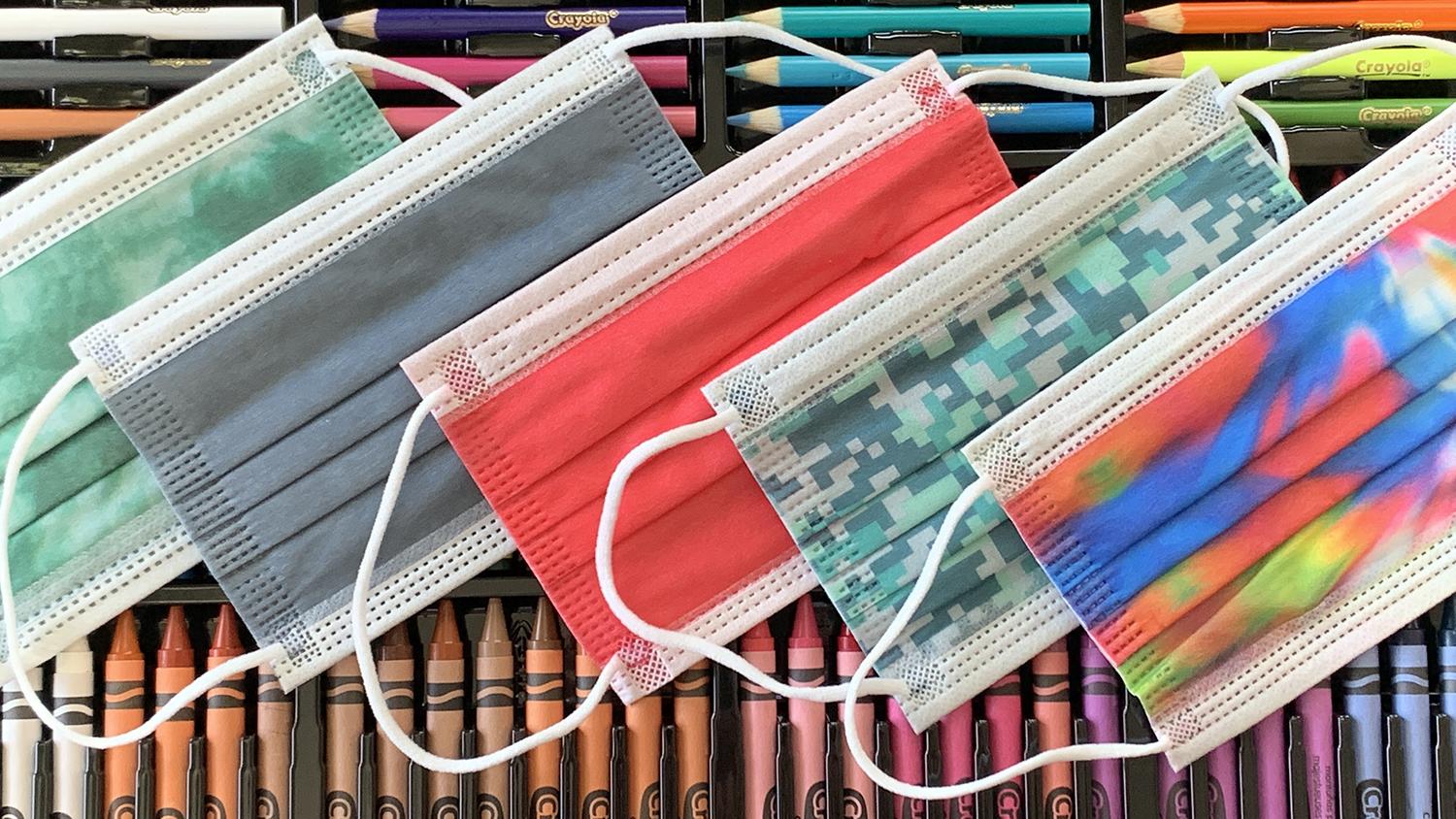 KJZZ
As the school year begins in Arizona, some school districts are requiring masks for students and staff.

Arizona Gov. Doug Ducey is taking verbal slaps at schools that he contends are violating a law on masking he signed.

"They should spend less time on virtue signaling, encouraging students to break the law, and more time on encouraging people to get the vaccine,'' said spokesman C.J. Karamargin of the now half-dozen districts that have told faculty and students they need to wear a mask while indoor and on campus. Karamargin said he accepts the definition of "virtue signaling'' to mean moral grandstanding or feigned righteousness.

And how does the governor believe schools are encouraging students to break the law?

"They are imposing a mask mandate that is in violation of the law,'' Karamargin responded.

So, a student at one of these districts who wears a mask is breaking the law?

Karamargin acknowledged the vaccine is not yet available for anyone younger than 12, which is one of the reasons cited by the governing boards of some of the districts that have chosen to impose a mask mandate. But he said schools should still encourage those who are eligible to get inoculated. And Karamargin pointed out that the first district that defied the governor is Phoenix Union High School where presumably everyone on campus, faculty and students, can get the vaccine.

Despite all that, Ducey has yet to actually seek a court order to enforce the anti-mask legislation. Instead, his press aide simply denies there is a problem.

"We expect school districts to follow the law,'' said Karamargin.

He brushed aside questions about the fact that the statute does not take effect until Sept. 29.

"The legislative intent is clear,'' Karamargin said, noting that lawmakers inserted language that may or may not be enforceable making the mask restriction retroactive until July 1.

Karamargin said nothing has been foreclosed. "All options are on the table,'' he said. But actually putting his own name on a challenge runs the risk of a judge concluding that the governor's reading of the statute has no basis in law. That leaves Ducey with only the attacks on the non-compliant school districts.

→ What To Expect From Lawsuits Over Arizona School Mask Mandates

Ducey's refusal to back down is in sharp conflict with fellow Republican Gov. Asa Hutchinson of Arkansas who said earlier this week he regrets signing a ban on mask mandates in schools.

"Well, I signed it at the time because our cases were at a very low point,'' he said.

"Everything has changed now,'' Hutchinson said. "And yes, in hindsight, I wish that had not become law.''

"The situation in Arkansas is very different,'' he said. "Our vaccination effort here is far more successful.'' 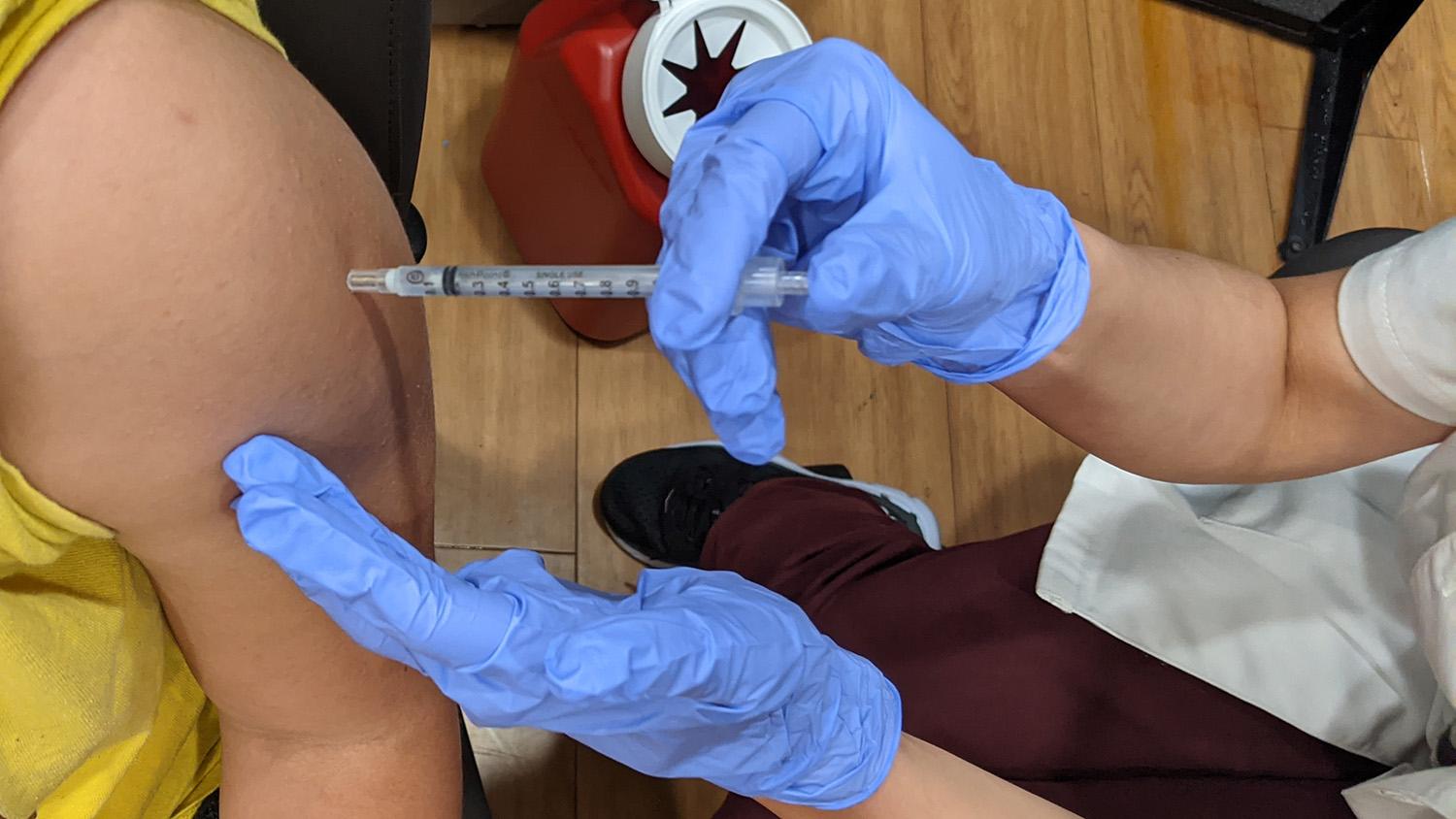 KJZZ
A pharmacist administers a COVID-19 vaccine in Phoenix on June 2, 2021.

Arkansas also has as many new daily infections as Arizona even though its population is less than half as much.

There is a lawsuit on the issue. That, however, involves a teacher at Phoenix Union High School District who is challenging the policy adopted by the governing board to require students, vaccinated or not, to wear a mask while indoors. A judge has set a hearing for this coming week to hear evidence.

But that ruling will set no precedents or legally bind any of the other districts that have so far openly defied the governor and enacted their own mask mandates. And, potentially more significant, it leaves the defense of the law not to a state official but an attorney who has previously represented supporters of President Trump in challenging the results of the 2020 election.

So, who does the governor think should be defending the law? Karamargin won't say.

There is Attorney General Mark Brnovich. But it appears that nothing in Arizona law gives him the authority to intercede, particularly as the state is not a party to any current lawsuit.

The governor should be aware of that: He filed a legal brief just five months ago in an unrelated case telling the Arizona Supreme Court that the attorney general has the power to litigate only when specifically authorized in statute to enforce a particular law. And Ryan Anderson, a top aide to Mark Brnovich, confirmed there is no such language in the just-approved mask mandate ban.

In fact, Anderson said, Ducey in his first year in office vetoed legislation which would have expanded the attorney general's right to sue. There is an exception to that. It does permit the attorney general to bring any action or defend any proceeding in state court "at the direction of the governor.'' But, at least at this point, Ducey has not provided such authority to Brnovich.

But there is some legal guidance on the question. The Arizona Constitution specifically empowers the governor to "take care that the laws be faithfully executed'' once they are approved by the legislature. Karamargin, however, said his boss is sticking to his position that schools will voluntarily comply — and see the law from the governor's perspective that it is in effect now.

"Our expectation is they will follow the law,'' he said.

Others have their own reaction.

For example, Sen. Kelly Townsend (R-Mesa) noted on Twitter that lawmakers will be constructing a budget for the fiscal year that begins July 1, 2022.

"I will not be voting to fund any agency that defies law in the name of COVID panic,'' she said.

The Legislature will be constructing next year's budget. I will not be voting to fund any agency that defies law in the name of Covid panic. #Nay

Townsend later acknowledged there are constitutional obligations for the state to fund public schools. But she told Capitol Media Services that does not tie the hands of lawmakers.

"I am sure there are constitutional ways to do it,'' Townsend said.

"I don't mean to completely defund,'' she continued. "But financial sanctions must happen at this point.''

And Rep. Leo Biasiucci (R-Lake Havasu City) wants a special legislative session to deal with not just the districts that have adopted mask mandates but also the failure of Maricopa County to comply with a legislative subpoena related to the election audit and a decision by Tucson to ignore a "Second Amendment Sanctuary'' law and instead affirm the applicability of federal gun laws within the city.

"You don't get to just ignore the law every time you don't like it,'' he wrote.

Pam Kirby, first vice chair of the Arizona Republican Party, had her own take, saying school boards are "skirting the law'' with their mask mandates.

"Do they realize that the signal they are sending our children is that it is OK to break the law?'' she asked in her own Twitter post.

But U.S. Education Secretary Miguel Cardona on Thursday criticized Republican governors for banning mask mandates in their states. At a press conference, Cardona was specifically asked about the governors in Texas and Florida who have enacted measures virtually identical to the one signed by Ducey. Cardona said that governors should not be the reason that schools are interrupted.

"Our kids have suffered enough,'' he said.

"Let's do what we know works,'' Cardona continued. "Politics doesn't have a role in this. Educators know what to do.''

EDITOR'S NOTE: This story has been updated to correct the byline.