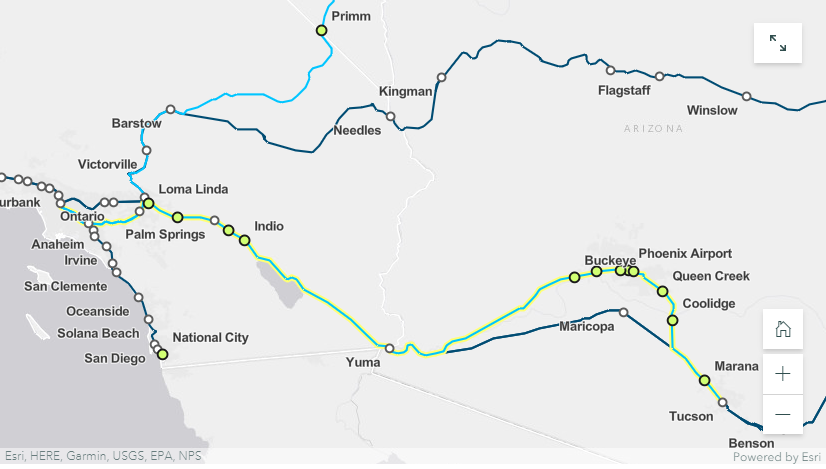 Corporate leaders of Amtrak, Arizona business representatives and politicians participated in a roundtable discussion Tuesday to promote support for developing passenger rail service in the state.

The main leg of the newly proposed service from Phoenix to Tucson would offer a 2 hour 25 minute trip between the cities three times per day — as compared to less than two hours by car.

Stephen Gardner, president of Amtrak, said rather than a much longer timeline to build high speed rail, there’s a chance to start service now.

“Then as demand increases and as the development of the region continues, look at how you augment that service with additional higher speed service, higher capacity service. That’s really the true development path of high speed [rail] everywhere around the globe,” he said.

Tucson Democratic Mayor Regina Romero also participated in the discussion. She said the proposed rail service increases economic development and travel options for residents and tourists, "including those that live south of Tucson in Nogales and Rio Rico to connect — even tourists that are coming in from Sonora, Mexico, which is our number one trading partner in Arizona.”

While Democratic Rep. Greg Stanton provided prepared video remarks for the presentation, he spoke to KJZZ separately about his support for Amtrak’s proposal.

“When I was mayor, I worked really hard to build a stronger bridge between Phoenix and Tucson to show that we need to work together as the two largest cities in the state. This would be a stronger physical connection between the two. So, it’s good from a transportation perspective but also good from an environmental perspective,” said Stanton, who touted the potential reduction in vehicle traffic as a positive byproduct of the project.

July 1, the U.S. House passed the Invest in America Act — a $715 billion infrastructure bill that was supported by Stanton. $32 billion of that sum would be devoted to maintaining, improving and expanding Amtrak rail service throughout the U.S. over five years including this expansion of passenger service in Arizona.

Currently, the legislation is stalled in the U.S. Senate.

Julie Sneider is a journalist with trade magazine Progressive Railroading. The Show spoke with her to learn just how likely this multi-billion-dollar plan is to happen here in the Southwest.