Mexico has given up on enforcing a zero-tolerance fishing ban in a small area of the Upper Gulf of California — the only habitat of the world’s most endangered marine mammal. And environmentalists worry that with fewer than a dozen left, this could spell the end for the small porpoise.

Mexican officials will now allow as many as 65 fishing boats in what’s known as the “zero tolerance” zone within a protected area for the nearly extinct vaquita marina porpoise.

A new graduated enforcement scheme announced this week casts aside efforts at full enforcement. Instead, authorities will use the number of illegal boats and fishing nets found in the area to incrementally apply resources and penalties — which include expanding fishing bans to a three nautical mile perimeter around the small zero tolerance zone up to the entire vaquita refuge. The closures can last from one week up to one month.

It’s a plan that amounts to abandoning the few remaining vaquita to fishing nets that trap and drown the little mammal, said Alejandro Olivera, senior scientist and Mexico’s representative for the Center for Biological Diversity.

“It's like going backward on the zero tolerance area,” he said. “With these new restrictions, now it’s a tolerance area, because they are allowing the presence of illegal pangas.”

The government has weakened already failing enforcement mechanisms, he said, and is allowing dozens of fishing boats into an area where there should be none.

“Any boat in the area should be responded to with the full capacity of resources,” he said.

Instead, the government has laid out a chart that allocates only a percentage of undefined "human and material resources" to the area depending on the number of illegal boats. For example, up to 20 boats illegally in the zero tolerance zone will be met with “monitoring” and just 60 percent of resources.

With only an estimated 10 vaquita remaining, the loosened restrictions pose a serious threat to the world’s smallest porpoise, known for the black markings around its eyes and mouth.

Poachers in the area use large nets to catch another endangered species — the totoaba fish — whose swim bladder is highly valuable on the black market in China. Those nest also trap and drown the vaquita, and are considered the leading threat to its survival. Many experts believe, however, that all fishing nets pose a risk, which is why the zero tolerance zone banning all fishing was established in 2017 in the area where vaquitas have been sighted in recent years.

Olivera believes the only way to protect the vaquita now is for the international community to increase pressure on Mexico.

For a look at the situation, KJZZ's The Show spoke with Kendal Blust of the Fronteras Desk who is based in Hermosillo, Mexico. 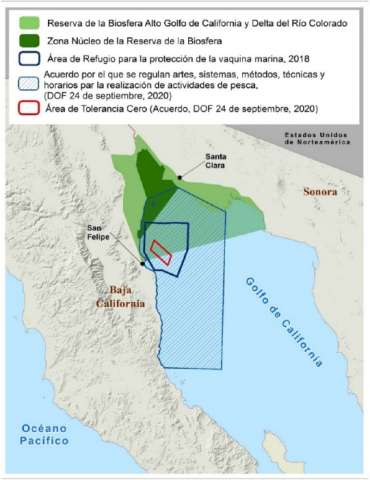