Sonoran Governor Pushes For Border Restrictions To Be Lifted 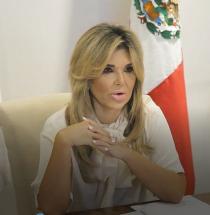 Gobierno de Sonora
Sonoran Gov. Claudia Pavlovich asks for border travel restrictions to be lifted during a meeting of Mexican governors on July 13, 2021.

Next week marks 16 months since travel restrictions were first implemented at the U.S.-Mexico border during the first wave of the pandemic. Now, Sonoran officials are calling for those restrictions to be lifted — and soon.

Sonoran Gov. Claudia Pavlovich is urging Mexican leaders to negotiate a speedy end to border travel restrictions that have been in place since last March.

"It's important for us, through a proactive and productive dialogue, to ask authorities of the Foreign Affair Ministry for their support to arrange the opening of the border for nonessential travel," she said during a virtual meeting of Mexican governors Tuesday. "It's important for the country, and without out a doubt, of course, for border states. We want to compete in the markets, to facilitate mobility and reestablish commercial ties that are so important for both sides."

Mexican officials said they support reopening the border, but that the decision is now up to the United States.

Though the restrictions have been called binational, uneven enforcement has meant U.S. citizens and permanent residents can still cross the border, unlike most of their Mexican counterparts.

Also this week, Gov. Doug Ducey wrote a letter calling the United States to keep Title 42 in place. The provision, which went into effect last year alongside travel restrictions, has closed ports of entry to most asylum seekers and quickly expelled those who cross the border elsewhere.

Migrant advocates and medical experts have long argued that there is no public health justification for Title 42, but that it causes serious harm to people fleeing their homes in search of safety.